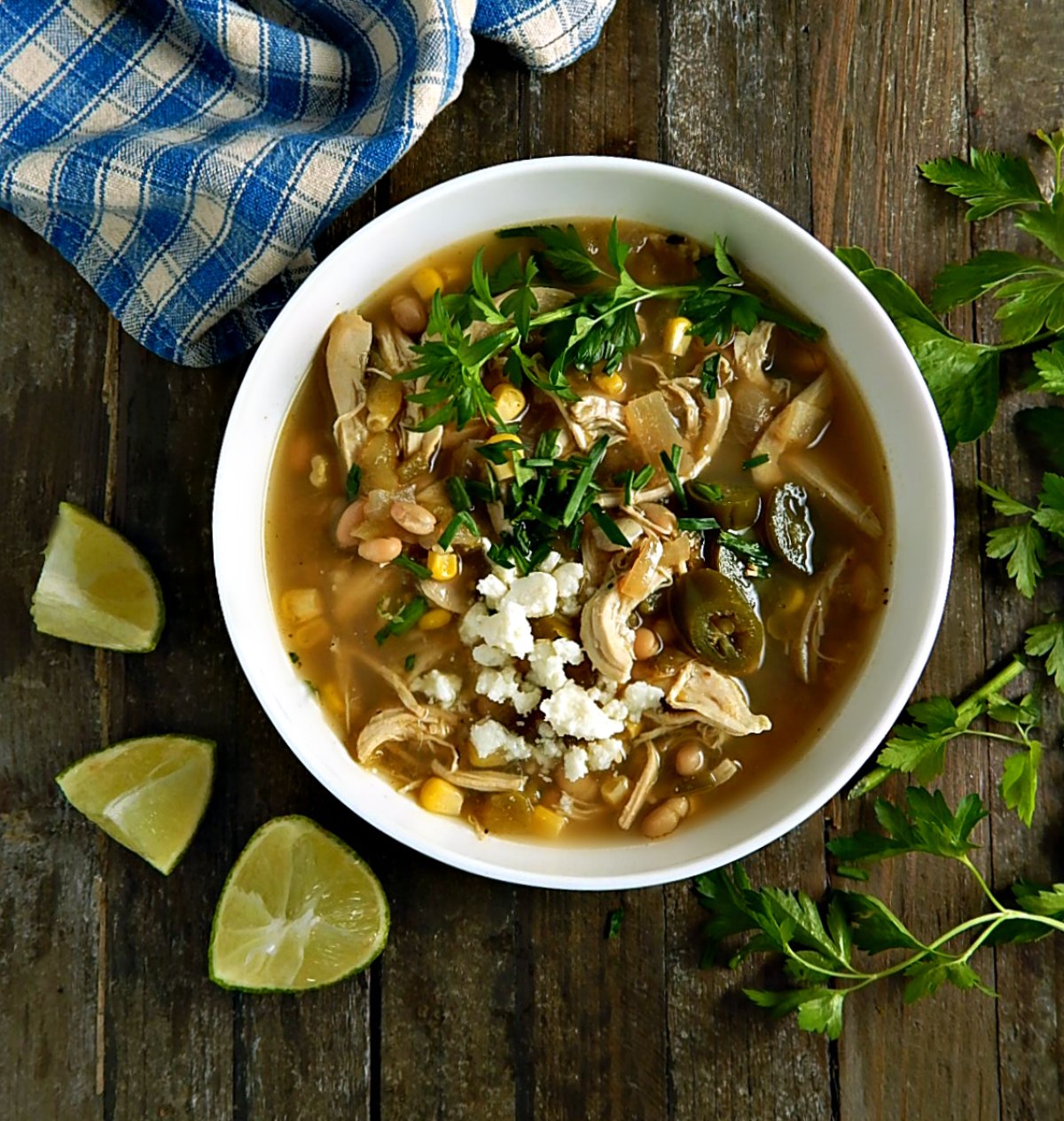 It’s been pretty bitter in the Twin Cities, but we’re having a little heatwave and are up to 12 degrees. Which would be great if we didn’t get about 7 inches of snow last night and even better if the high tomorrow wasn’t expected to be -5 with a low of -25 and worse on Wednesday. But that’s exactly the time you want soup! And even better a pretty much pantry soup (if your pantry is anything like mine) and not just any soup. You want this little White Chicken Chili Slow Cooker – Instant Pot – Stovetop number coz it’s going to warm you from the inside out!

I poached White Chicken Chili Slow Cooker – Instant Pot – Stovetop off of the New York Times and only very slightly modified it. I grew up with my Mom’s New York Times Cookbook and then she gifted me with one of my own, but over the years the Times has really expanded their recipe collections to include not just “fancy” recipes but down-home and globally influenced ones, too. You have to pay now for a subscription but you can sign up for several emails, like Sam Sifton’s “What To Cook This Week” and those recipes are free to look at, at least for a time. I almost always find something I want to make and love Sifton’s narrative.

But let’s get back to this chili, White Chicken Chili Slow Cooker – Instant Pot – Stovetop. The Times says “This tangy, mildly spicy white-bean chili is as warming and comforting as a traditional chili, but in a lighter, brighter form. Plenty of green chiles — fresh and canned — provide kick while creamy white beans mellow it all out.”

The description really is spot on, although the “plenty of green chiles – fresh and canned” was three cans of green chiles along with one lone jalapeno! The minimum of chopping and prep in this recipe means a minimum of time and effort for a pretty big pay off! I love that White Chicken Chili Slow Cooker – Instant Pot – Stovetop IS so light and fresh tasting and packed with flavor but just the right amount of heat for just about everyone. It would be great for family fare or game day or to bring to a work potluck. And of course, you can nudge that heat level up or take it down – the serving suggestion included Pickled Jalapenos so I couldn’t resist a few for garnish & a good dose of the brine in my bowl.

I’m going to give you a “caveat” about this recipe because I’ve only cooked it in the slow cooker, but I’m giving you instructions for the stovetop (passed along by the Times) and the Instant Pot directions which were passed along by several reviewers. I don’t usually do that unless I’ve specifically made the recipes with each of the methods, but it’s January, and you need White Chicken Chili Slow Cooker – Instant Pot – Stovetop in your life, stat. And this recipe is not that particular with quite a bit of room to customize, anyway.

I loved the Slow Cooker method, and my Instant Pot was tied up with something else (maybe I DO need two!) and my son Kraig and his g/f Tweety were over helping me out. It was the perfect thing to have sitting over in the corner, doing it’s thing while they caught me up on so many chores…one of which was putting plastic film over my front windows in anticipation of our arctic cold. I restored those windows in my 1940’s house years ago, but in retrospect, should have replaced them with the rest of the windows!

And while my hand, elbow, and shoulders seem to be improving, this really is the perfect low effort recipe with hardly any prep or hand work. It’s perfect for a busy cook, a new cook, or a gimpy one like me! One onion to chop, a few cloves of garlic (I cut back from 10 cloves in the original to about 4 big, fat ones – I need to get a jar of garlic since chopping is difficult) a jalapeno to dice (we removed the seeds) and cans to open. And Kraig opened the cans for me; that I really couldn’t manage! With the canned items, you might want to do what I do and hold off on any salt until the soup is finished. I made a few other minor changes in the recipe; the original is here.

We went with three cups of broth in the slow cooker but added another cup after it was finished. I wasn’t looking for a thick chili; you can go with three cups but do what I do: have a little extra broth on hand to add after it’s done if the consistency isn’t just what you want. I saw many comments on the site expressing worry that the canned beans wouldn’t stand up to the time it takes the recipe to cook. Those beans are just fine!

When I make White Chicken Chili Slow Cooker – Instant Pot – Stovetop again, unless I were using an Instant Pot because it would take it over the “Max Fill” line, I’d double this recipe and portion and freeze any leftover for easy meal prep. I’d also use more beans and a little less chicken but I love beans as a great source of cheap protein and fiber along with vitamins and minerals that are hard to get elsewhere. See what the World’s Healthiest Foods has to say about Navy Beans.

Your greatest savings in this recipe is going to be had by shopping well for the chicken; thighs in our area can drop down to 69 to 89 cents a pound and chicken breast can be had for as low as 99 cents a pound. That’s where your freezer is going to save you a ton of money and more than pay for itself in no time at all.

Dried beans you prepare yourself (See Soaking & Brining Beans) are going to save a little money over canned but they’re so cheap that the savings are minimal. (My canned beans were $1.38 on sale; an equivalent amount of dried, $1.12.) Not to be discounted, and that varies with sales, but the real savings you’re going to see is in shopping well for the ingredients. Stock up on canned green chiles around Cinco de Mayo or the Superbowl, buy frozen or canned corn in the fall when the warehouses are full and it’s at alow. Canned corn is generally cheaper than frozen and in a recipe like this, the quality makes little difference. Pick up canned beans on sale. And make your own Homemade Pickled Jalapenos, especially if you buy your jalapenos in the larger packs at Aldi.

You can also pretty much break the bank or save money with your toppings. Avocado is pricey, sour cream can be, too. And so can a lot of cheese. I love bringing my herbs in every year and don’t discount how a little freshness (and the vitamins and minerals) go a long way to make meals seem fresh and appealing. Cilantro is one herb that doesn’t fare well, so I sub in some parsley. I didn’t have green onion so in went some chives. Do use the lime – it’s essential to the flavor of the soup, but if you can’t swing it/don’t have it add a touch of acid from the jalapeno brine or a dash or two of vinegar.

This tangy, mildly spicy white-bean chili is as warming and comforting as a traditional chili, but in a lighter, brighter form. Plenty of green chiles — fresh and canned — provide kick while creamy white beans mellow it all out

In a large Dutch oven, heat oil over medium heat. Add the onion and cook, stirring occasionally, until the onion is softened and translucent, about 8 minutes. Add the garlic and jalapeño and cook until fragrant, about 1 minute. Add cumin, onion powder, oregano, and cayenne and stir until fragrant, 1 to 2 minutes. Stir in the canned green chiles.

Transfer the mixture into a 5- to 8-quart slow cooker. Generously season the chicken thighs or breasts with salt (or if you’re watching sodium, skip this step and add salt to taste when chili is finished) and add them to the pot. Stir in 3 cups chicken stock and the beans. Cover and cook on low until the chicken is tender, 4 to 6 hours.

Shred the chicken using two forks. (You can do this directly in the pot, or remove the chicken to a bowl, shred it, then return it to the pot.) Stir in the frozen corn or canned corn, cover and cook until warmed through, about 10 minutes. Stir in lime juice. Season to taste with salt if desired. Serve in bowls and pass the toppings at the table.

You can also cook the chili in a Dutch oven on your stovetop. Use 4 cups stock instead of 3 cups and bring the mixture come to a simmer over medium-high. Reduce the heat to low, cover, and cook until the chicken is tender, stirring occasionally for about 35 minutes. Proceed with the rest of the recipe.

I’ll be sharing my White Chicken Chili Slow Cooker – Instant Pot – Stovetop at Fiesta Friday #260, hosted this week by Diann @ Of Goats and Greens and by Moi! Stop by and visit and see what this special link party is all about.