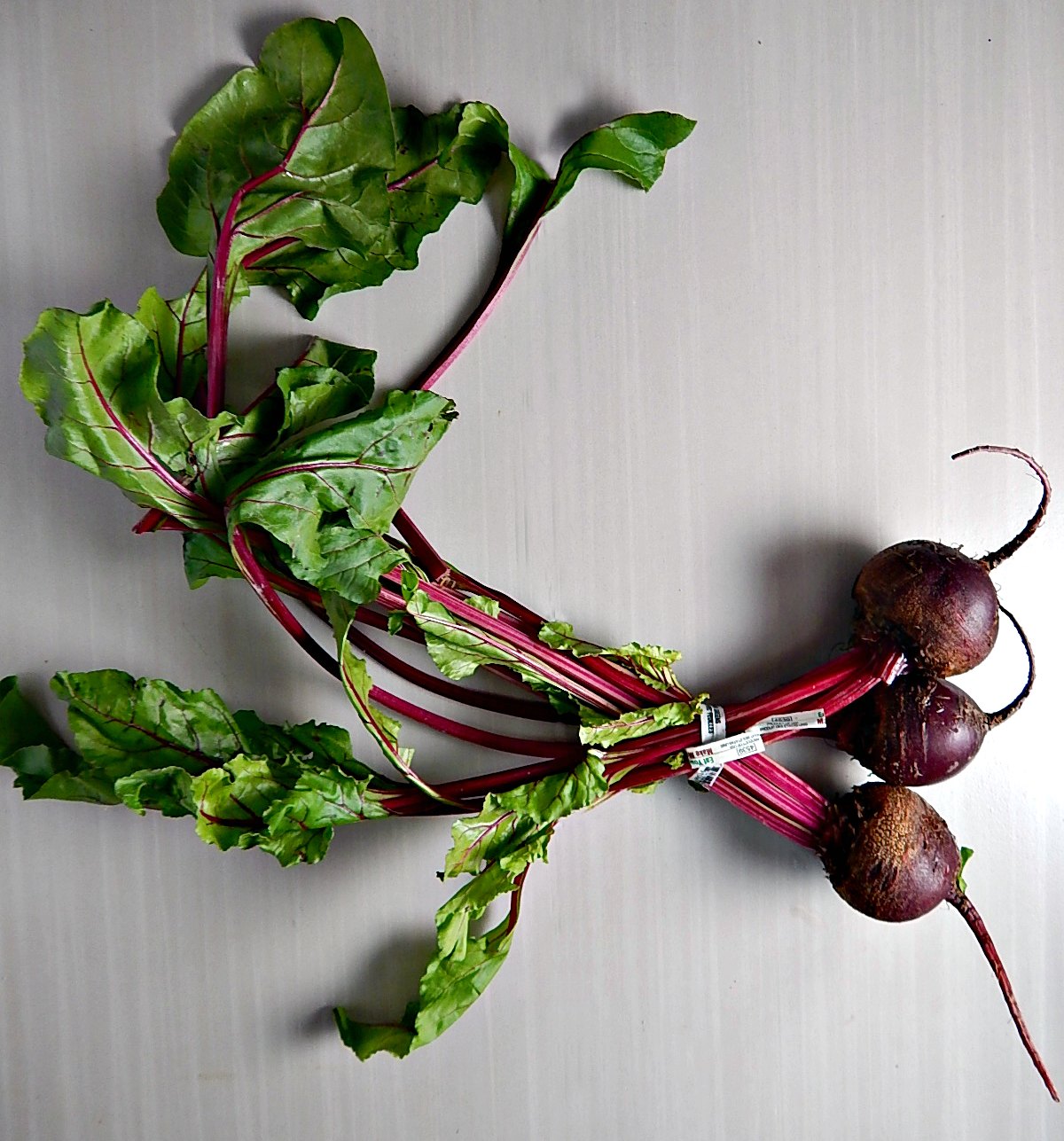 When I first started writing about food, it was always my intention to highlight ingredients, how to shop, compare prices, choose them, store them as well as use them. And I did make a stab at that, years ago, under “Ingredients” in my menu. So the first post in this series is What To Know About Beets.

Over the years, I began giving hints on every post about the ingredients. This year, I’ve decided to move forward with my original vision, and cover an ingredient from (hopefully) every post with a goal of eventually having my site be a better resource for you. Today, obs, I am choosing beets, inspired by my recent posting of Cubby’s Beet & Goat Cheese Salad.

What To Know About Beets:

I’m talking about the common beet, here, and culinary use of beets. Usually known in North America as the beet, and also known as the table beet, garden beet, red or golden beet, in other parts of the world you see it called beetroot.

The common beet is one of several of the cultivated varieties of Beta vulgaris grown for their edible taproots and their leaves, which are called beet greens. Beets, along with chard, spinach, and quinoa belong to the chenopod family.

While most of us are familiar with the garden beet, beets also come in different varieties and might be purple, pink, golden, white or candy-striped inside. Golden beets are said to be slightly sweeter than red beets, without as much of the “earthy” flavor of the common garden beet. The white is the least sweet and the candy-striped are among the sweetest.

What To Know About Beets, Shopping:

Fresh beets are available throughout the year, their season runs from June through October when the youngest, most tender beets are easiest to find, and that’s when you’re likely to find great prices for beets at farmer’s markets and better pricing at the grocer’s than you will through the winter and spring. Beets are sold in a bunch of two, three or four rather than priced by the pound. In the offseason, those bunches always are smaller and the price higher.

Beets may have beautiful beet greens, scrappy ones or the greens may have been removed. The greens say it all when it comes to freshness, although ratty greens don’t necessarily reflect the quality of the beets. For the tastiest beets, look for medium-sized to smaller beets that are darkly colored, firm and smooth. Avoid beets with bruises, spots, shriveling, soft areas or other signs of spoilage.

Beets are also available canned, whole or diced as well as frozen, and either can be a viable option at a much lower cost than most fresh beets. You’ll find beets pickled, too, which is a simple process easily done at home for pennies, and canned beets may be pickled, as well. Since beets are experiencing a hey-dey as a superfood, you’ll find beets dehydrated as chips and in a powder form and you’ll find beet juice and supplements at natural-food stores.

What To Know About Beets, Storing:

To store, cut the greens off the beet at about 2″, so they don’t draw moisture and nutrients from the root end, leaving the excess to avoid excess bleeding. Do not wash the beets. Place beets in a plastic bag, pushing out as much air as possible and store in the refrigerator. The cold will slow excess loss of nutrients. Beets keep three to four weeks stored like this. Treat your beets gently; they look sturdy, but are quite delicate and bruising will cause excessive bleeding.

The greens should be stored in a separate bag, unwashed until ready to use. Again, remove as much air as possible. They’ll keep for three to four days. If there are any ties or rubber bands on the greens, remove immediately.

Other methods of storage:

What To Know About Beets, Cooking:

Gently rinse beets, being careful not to tear or bruise the skin, which will cause them to leak more of their liquid. Unless you are very careful, it’s very likely your hands and fingers will be stained while working with beets. Wear kitchen gloves, and if your hands are still stained rinse and dry immediately then rub with lemon juice.

If possible for best flavor and least mess, leave the skin on the beet and the stem and root ends intact when cooking. Leaving the skin on and ends intact when cooking locks in the flavor and maintains the integrity of the cells which minimizes leakage. Beets peel very easily after they’re cooked. For less bleeding, remove the excess root end first, peel and then remove the stem end. When trimming the beet, either before or after cooking, slicing away just a bit extra from the stem and root end minimizes some of the “earthy” taste of beets that is offensive to some people.

The common beet, like most root vegetables, responds well to several cooking methods. A favorite method is to roast, wrapped in foil and even the blander canned beets can be improved by drizzling with vinegarette and roasting; see both methods in Cubby’s Beet & Goat Cheese Salad. Beets can also be baked, boiled, or steamed as a side dish, and can be used raw, cooked or pickled in salads.

The leaves and stems of the plants can be steamed, simmered or sauteed and treated much like Swiss Chard or they can be stir-fried. They may be eaten as a vegetable cooked or added raw to salads or smoothies, either beautiful, tasty ones or my very serious smoothies like my Big, Fat, Green Smoothies on a Budget. A lot of my potential food waste goes into those smoothies. The stems of beets can be pickled as well as the root.

What To Know About Beets, Nutrition And Health Benefits:

According to Wikipedia, a 100-gram amount (about 3 1/2 ounces) beets supply 43 Calories, contain 88% water, 10% carbohydrates, about 2% protein and have a minute amount of fat. Beets are also a source of betaine, a type of antioxidant that’s evident in its rich, red-colored roots. The beetroot is also a notable source of manganese, folate, and vitamin B2, as well as a source of potassium.

Beet greens are usually a valuable source of lutein/zeaxanthin. One cup of raw beet greens may contain over 275 micrograms of lutein! Beetroots are not nearly so concentrated in lutein, although some beetroots, like the roots of yellow beets, may be valuable sources of this carotenoid.

If you’re interested in knowing more about beets, their nutrition and health benefits, including their role in detoxification, their antioxidant, and anti-inflammatory properties, check a reliable site, like the World’s Healthiest Foods. It’s where I get most of my nutritional information (and a lot of information for this post.) Myths and misinformation about the beet, especially since it’s sudden rise in popularity, are everywhere, some of them a little crazy! For instance, I saw a site that claimed the sugar in beets doesn’t affect the blood sugar in diabetics. Wrong.

What To Know About Beets, Nutrition from My Fitness Pal

What To Know About Beets, The Downside:

A side effect of beets, affecting 5 to 15 percent of the population is “beeturia” a condition that turns the urine pink or red. While not commonly a cause of concern in itself, in some cases it may point to individuals with iron deficiency, iron excess, or specific problems with iron metabolism. A follow up with your Doc may be indicated.

If you have kidney disease, your Doc may direct you to avoid beets because of their high potassium content; elevated potassium levels may cause specific issues, including heart attack. Also, while beet allergies are rare, they do occur in some people. Symptoms of a beet allergy may include stomach cramps, diarrhea, vomiting, and hives. Anaphylactic reactions have also been reported.

I hope you’ve enjoyed “What To Know About Beets.” I know I’ve only scratched the surface, but additional resources are listed below! In the meantime, if you can’t beet ’em, join ’em! (I couldn’t help myself!) If What To Know About Beets has you hungry for more, click on the tag, “beets” at the bottom of the page to see all recipes that reference the beet.

What To Know About Beets

40 thoughts on “What To Know About Beets”