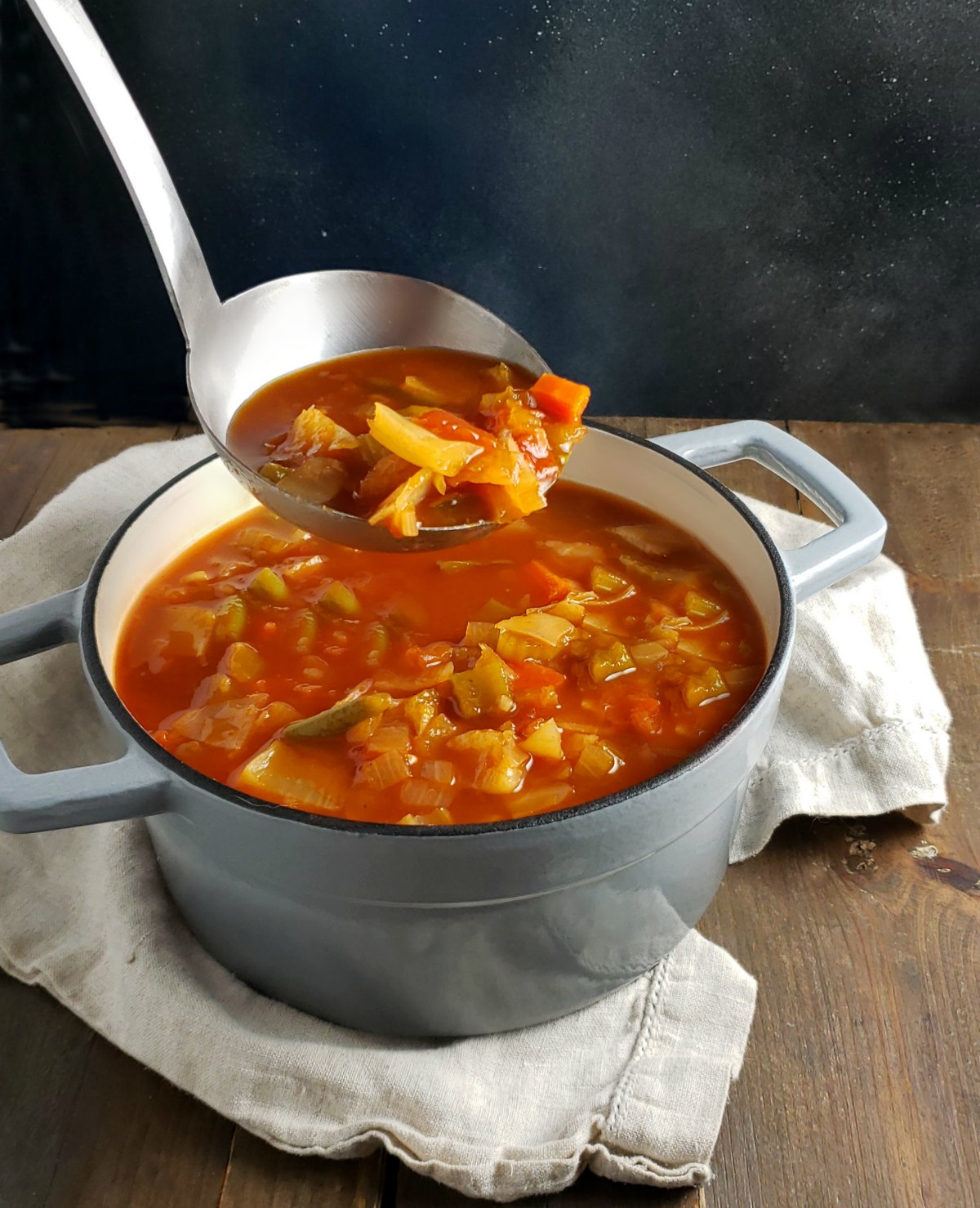 A while back, I was involved in a discussion about weight loss and recipes & someone said something like, “You don’t want to be stuck eating cabbage soup, do you?” I was like, “Oh my gosh, Original Fat Burning Cabbage Soup? I love that stuff!” And so help me, I do! I love this old recipe.

I usually make this soup at least a couple of times a year, but I have it more often because there’s usually some in my freezer. Actually, usually, there’s a lot of soup in my freezer because I love love love me some soup. Check out my menu of Soups, Chowders & Chili. You’ll see what I’m talking about! But back to the Fat Burning Soup.

What’s not to love about this Cabbage Soup? Nothing as far as I’m concerned. I’ve never gone on that Cabbage Soup Diet, but I love the soup! It tastes great, it’s low-calorie and high in nutrition, downright cheap, easy to make and makes a big pot. And since it makes such a big pot, I like to portion some of mine out and freeze in individual servings or larger for a family. So let’s add make-ahead, meal prep and freezer meal to that list.

When I have The Original Fat Burning Cabbage Soup in my freezer, I know I know I can always grab a quick container of soup for lunch or dinner.  Sometimes I’ll just have it because I like it, but other times I use if for a little balance. if I’m having a day when I’m not getting my veggies in, I don’t have to think about it. I just pop some in the microwave. And if there’s been a day when I’ve pigged out the next day I can have a quick bowl for breakfast (yeah, really) lunch or dinner.

This makes a huge pot of soup. Pull out your largest stock or soup pot. In a pinch, you can divide everything into two pots. I sometimes half the recipe and it’s not so particular that you need exact measurements of everything. This is an easy dump everything in the pot recipe; the only change I’ve made from the original is I add the green beans (when I use them, see below) at the end. They’re already pretty soft and don’t need to cook long.

I do like to add a touch of vinegar and lots of black pepper when the soup is done and that’s when I check it, too, to see if it needs any salt. A lot of people like to add in garlic and/or a few herbs. You can’t go wrong with some Italian seasoning or a little oregano.

As far as the beef broth, any kind can be used, boxes, canned, powder, etc, and I usually like low sodium. Then I can adjust as mentioned above when the soup is done. You can sub in a vegetable broth if you want to go vegetarian. The canned beans are a strange addition to all the fresh vegetables. To tell the truth, I usually just skip them except today for the photos, in they went because, well, it’s original! You could sub in with some fresh green beans if you’d like but I find the texture just as strange. That’s up to you.

As written, the Original Fat Burning Cabbage Soup is already downright economical. All the veggies and ingredients are common, everyday items. Making your own Lipton Onion Soup Mix saves a bit of money, and also allows you to easily customize the quality or type of ingredients in the soup. This can be low-sodium, vegan, vegetarian, etc., just by varying the homemade soup mix and the type of broth you use.

Do watch for sales on the pantry items, the tomatoes, the broth, and the juices. There’s really no reason to be paying full price on those items when they can be easily picked up on sale and stashed until needed. All of these pantry items usually hit a low sales price about once a quarter, so if you know your pricing, you’ll know when a deal comes around that makes it good enough to stock up on. You’ll find low prices for a lot of these items at Aldi, or at Costco (in bulk packages) but a good store sales price usually beats either.

Cut all vegetables into about 1/2 inch dice. Add all ingredients except the green beans to a very large pan or stockpot and stir. Bring to a boil, turn down to a good simmer and cover partially with a lid. Simmer about 35 – 45 minutes until vegetables are tender and done to your taste; stir once or twice as it cooks. When finished, add in the green beans to warm through.

Since this is a very large pot of soup, it’s best to divide it into several containers to refrigerate. Keeps well for about a week in the fridge. Freezes very well in either single serving or family-sized portions.

I’ll be bringing this recipe over to Fiesta Friday #180, hosted this week by Tracey @ My Baja Kitchen and Jhuls @ The Not So Creative Cook.