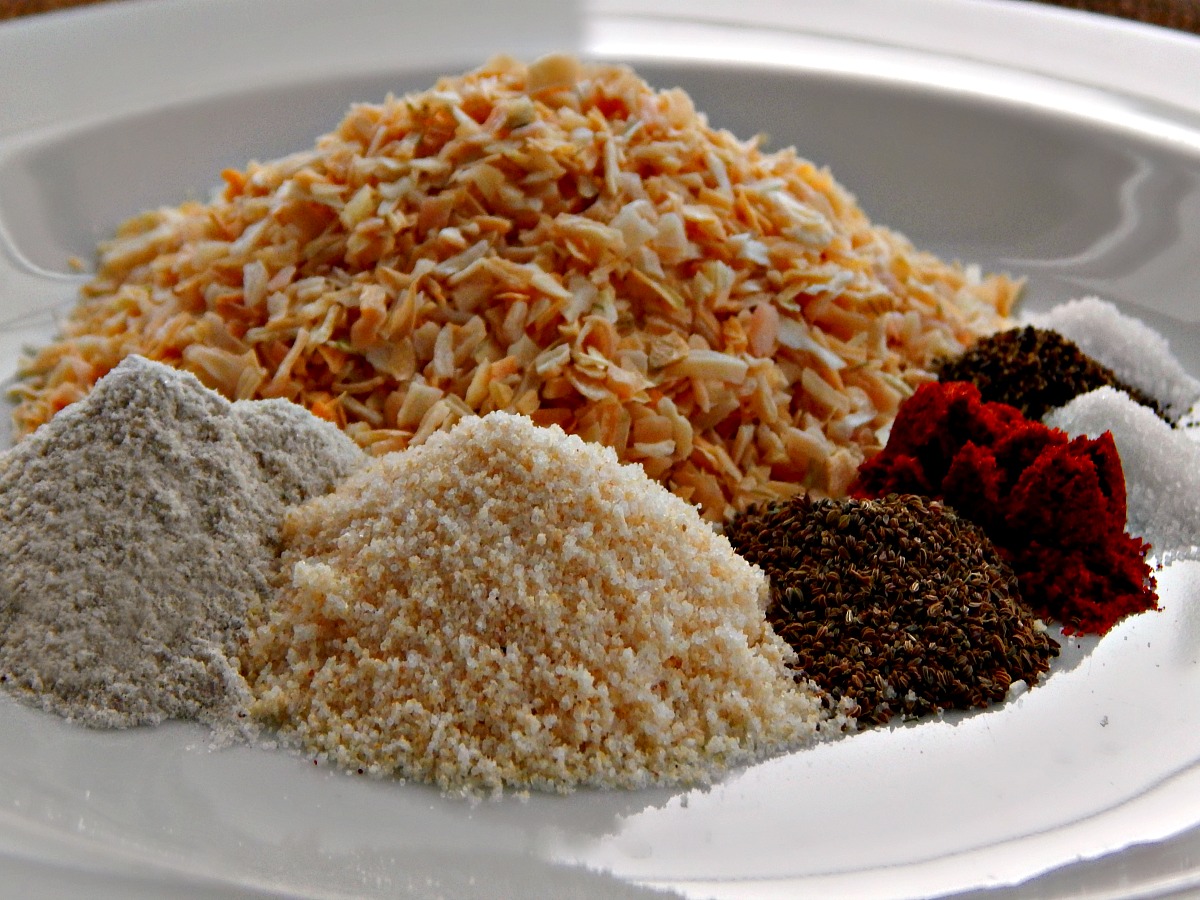 Lipton Onion Soup Mix. While the rest of the world might not be familiar with this product, I’m betting there’s very few in the US who didn’t grow up with it – and the old familiar recipes. I didn’t want to shell out the bucks for a small box with a packet or two, so when I revisited some of those old classics, I made my own Homemade Onion Soup Mix.

Back in the ’60s & ’70s, my Mom, who was an excellent cook, didn’t blink an eye at using the Lipton Onion Soup Mix in a few recipes. I kind of got away from that, but I was feeling nostalgic and thought I’d do the same. I was really more than a little surprised at how good some of those recipes I had always taken for granted were. I’ve even put together a little collection of my fave tried and true Lipton Onion Soup Recipes here on my site.

The best of that collection has to be the Quaker Oats Meatloaf, just like Mom made it. And a very old recipe for BBQ Pork or Brisket. I found that recipe in my Mom’s recipe box after she passed, and the funny thing was, I gave that one to her. And of course, you can’t pass up Lipton’s French Onion Dip! It was actually better than I remembered! Other recipes are in that collection, too.

I picked up the actual Lipton Onion Soup Mix so I could compare it to my Homemade Onion Soup Mix and have to admit it’s pretty darned close in taste even though the ingredients are quite a bit different. I like my homemade version better. Maybe that’s just a psychological thing, though because I always think homemade anything is better than just about anything you can buy. And speaking of homemade, I don’t know anyone who actually makes soup out of Lipton’s Onion Soup Mix! I’ve only ever had it used in recipes.

A great thing about making your own mix is you can control every ingredient that goes into it as well as the quality of those ingredients. The mix, in addition to the dried onion flakes and spices, relies on a powdered beef base. That, right there, is an item that can range from high-end organic down to basic and can be low sodium, too, or gluten-free. And yes, this can be vegetarian or vegan, too. So by choosing the beef (or other) base that fits your lifestyle, you just might find yourself using Homemade Onion Soup Mix more often then you’d guess.

It turns out that I actually had most of the ingredients to throw this together, right in my pantry. The only thing I had to pick up was the onion flakes and I’ve actually been using them in a few other recipes, too, when I’m feeling a little lazy and don’t feel like chopping. When I think of the number of onions I’ve cut over my lifetime! It must add up to tons. Literal tons.

I remembered an old blogger friend, Quinn, of Dad What’s 4 Dinner had posted a recipe awhile back. I love his blog, love his enthusiasm and his great recipes. You will, too! And check out his Cooking with Ella features; Ella is Quinn’s youngest daughter and they have a blast in the kitchen.

I played around with Quinn’s recipe a bit more – I wanted my own lower sodium “signature blend” of herbs and spices I could use at the folk’s house so I started off with Herb Ox Sodium Free Bouillon. If you’re more budget-minded, there are other beef bouillons that will work well, too, and if you’re health-conscious, there are organic ones. Strength might vary by brand, so you might want to play around with the amount of bullion if you use something else.

If you are familiar with Lipton’s Onion Soup Mix, you might realize that there isn’t any beef, broth or bullion in their basic mix. But there is a lot of other stuff. Things I can’t buy at the store! So what the bullion does here is bring in some of those “umami” flavors with no need to be a food scientist.

Most of the ingredients for Homemade Onion Soup Mix are common ingredients that you might just already have in your pantry. The exception, for me, was the dried onion flakes. Granulated onion flakes will work in this recipe, too. Check out the lower shelves under the herbs and spices and you’ll likely find them in larger jars. Generally, the larger the jar, the lower the price per ounce. Check the bulk spices, too and you might find jugs of this and other spices at your buyer’s club. When I priced my Homemade Onion Soup Mix, it came out at a far lower cost than the Lipton’s Onion Soup Mix.

The item that is priciest is the Beef Boullion powder or granules. Notice that there’s really not a lot in the mix. About a teaspoon (which equals a cup of beef broth) for the equivalent of each Lipton’s Soup Mix, so it won’t break the bank. It’s really there to mimic some of the flavors in the soup, not to make the soup “beefy.” That’s another packet altogether. Shop around and buy what you’re comfortable with. I like picking my basic beef base up at the Mexican or Latino markets or section of the store where it’s really dirt cheap.

After looking at the ingredients in the recipe, or checking out what’s really in your Lipton’s Onion Soup Mix, you’re going to realize that you’re paying a premium price for what is mostly just Dried Onion Flakes! The average price for a package of Lipton’s, which is two packets, one ounce each is $1.50. It doesn’t sound that much but adds up – and that $1.50 for 2 ounces works out to $12.00 a pound. If you’d like to see any of my other money-saving mixes, check out my post on Spice, Herb & Packet Substitutes page. I’m always adding as I go along.

Combine ingredients and store in an airtight container. This makes the equivalent of 2 packets of Lipton’s Onion Soup. Use 1/2 (about 1/4 cup) per recipe.

May be multiplied for a larger quantity; just be sure to remix before using as settling will occur.

Note: Any base will work for this recipe, from high-end organic to common grocery store bases, low sodium, gluten free, chicken or vegetarian bases.

I’ll be bringing this dip over to Angie’s Fiesta Friday #157, cohosted this week by Andrea @ Cooking with a Wallflower and Su @ Su’s Healthy Living. Thanks, ladies, for making this link party possible!