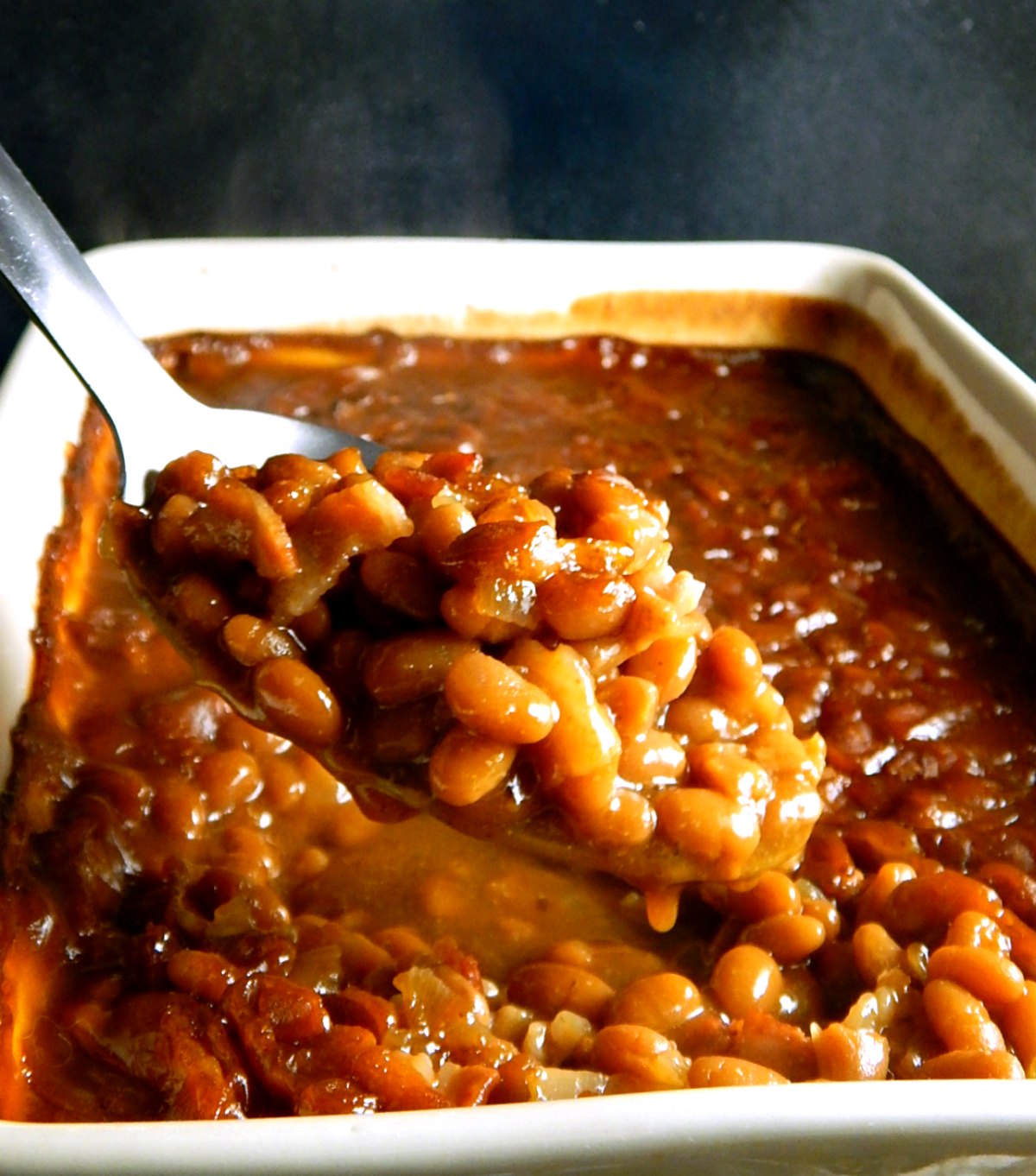 Do you have your top secret Ninja ways to make plain old canned baked beans taste more like homemade? I have a couple of tricks up my sleeve, depending on what kind of beans I want. Most of the time when I’m Doctoring Canned Baked Beans, I’m looking for kind of delish New England style, a bit zippy, a little sweet and super flavorful and that’s what these are.

Not that there’s anything wrong about heating up a can of baked beans for a quick side, but I guess I just like to put my own spin on things and add a little extra goodness – without going through the heroics of cooking my own from scratch.

My favorite beans to use for this recipe are Bush’s Baked Beans, the original flavor but this still works well with their Original, Brown Sugar, Onion and Homestyle beans. They have about 14 varieties now and I haven’t tried them all. I wouldn’t use any of their “Grillin’ Beans” for this recipe.

When I have a little time on my hands and want my canned beans to taste like real home-style cooked for hours from scratch, I transform those canned beans. Into a large saucepan goes bacon and onion to cook until the bacon is rendered and the onion tender, then beans with some sweet brown sugar and deep, earthy molasses. A touch of ketchup adds a rich tomatoey vinegary goodness. Then that’s all fortified with the faintest touch of vinegar and lots of mustard powder to give some tang to offset the sweet. That’s my “secret” ingredient right there, the mustard powder. If I’m really feeling it, I might add a whisper of ground ginger; it gives a little zip, but that just depends on my mood.

Then I bake those beans in a casserole, in the oven, slowly, for a good hour, until the top has darkened and almost caramelized, the beans are bubbling and thoroughly hot throughout and the smell is just about driving everyone cray cray. And about the time someone asks, “Aren’t those beans done yet?” They are.

That’s when I pull those glorious molten beans from the oven and scoop through the top layer, the steam pouring out, and I reach with the spoon, straight down to reveal those saucier beans below. And every serving has a combination of the sticky sweet caramelized beans from the top and the saucier ones from below and you know there’s bacon! They’re glorious. I think I’m going to go have some right now before I even finish this post or edit the photos. I’ve been tantalized by that aroma for far too long. Excuse me a minute….I’ll be back!

Saucepan: First of all, if I’m just looking for a quick weeknight side for burgers or something simple, I just drain off the excess liquid that floats on top of the beans when the can is first opened, then toss the beans in a saucepan and add a squirt of ketchup, a touch of regular old ballpark mustard, a bit of brown sugar and heat them slowly for a few minutes until hot and bubbly and everything has dissolved into a thick sauce. Done. And what a difference that two minutes of effort makes. Boom. Mike drop.

Shortcut: When I want to bake my beans, I gotta tell ya, I think my original recipe/method is the best, but it does take quite a while in the oven. If you want to shortcut that recipe a bit, when you first open up the can, just like I described if you’re making beans in the saucepan, drain some of the liquid off. Then proceed with the recipe, below but only bake it for half an hour or so or just until bubbly.

Bacon on Top: When I make my beans, I always chop up the bacon and cook it with the onions; another variation is to just lay the bacon over the top of the casserole and bake it at 400 degrees until the beans are bubbly and the bacon is crisped through. That’s never been my fave way because it’s hard to get the bacon just right but a lot of people love their beans that way and it looks impressive when it comes to the table.

Canned beans really do scream summer and barbecues and cookouts. Watch or them on sale sporadically through the summer and especially before every holiday. The price can get surprising low. Stock up at the low; it never hurts to have a can or two on hand to fill out a meal and once you try this recipe, you might be wanting to make them more often.

Bacon is one item I really shop strategically for. It’s generally on sale before every holiday, often at half price. Since it doesn’t take up much room in the freezer, it makes sense to stock up on bacon, too.

I’ve pretty much always baked and always have molasses on hand. It keeps for years, just be sure the cap and lip of the bottle are clean before storing back in the pantry or you’ll never get it open again. A little molasses, along with white sugar, make “brown sugar” so it’s handy to have some molasses in the pantry if you don’t regularly use brown sugar. If your brown sugar has hardened, either add a piece of bread to the bag and let sit overnight or place in the microwave, cover with a damp paper towel and microwave in 30-second intervals.

Shortcut this recipe by draining off the excess liquid from the top of the can and baking for 30 minutes.

Preheat oven to 350 degrees F. Have a two-quart casserole at the ready.

In a large pot or Dutch oven, add the bacon, onion, and water. Cook, stirring often until bacon is rendered (but not crisp) and onion nearly tender, and all water evaporated. Add in beans, brown sugar to taste, ketchup, mustard powder, molasses, and apple cider vinegar. Stir and bring to a boil. Add ginger, if desired.

Place beans in casserole, place in oven and bake about 1 hour, uncovered until top has darkened but isn’t burned, watch it at the end, and beans are bubbling and piping hot. Remove and let sit for several minutes before serving.

I’ll be sharing Doctoring Canned Baked Beans at Fiesta Friday #280. The hosts this week are Angie of Fiesta Friday and  Ai @ Ai Made It For You.