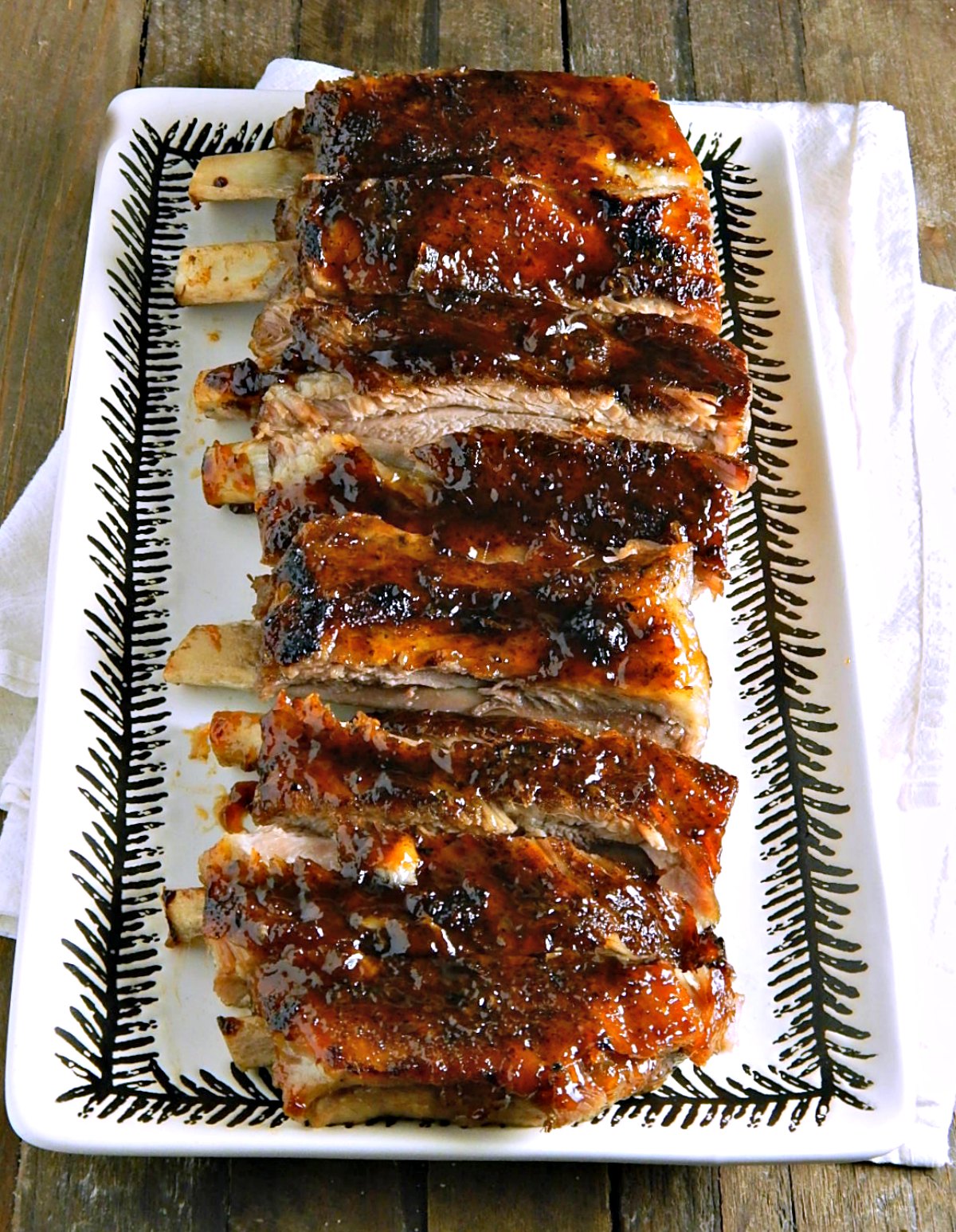 There’s no doubt summer is here, even in Minnesota, where for the most part it’s been cool. And there’s no doubt Father’s day is just around the corner, too, this Sunday! Father’s day always makes me think about being outside, maybe barbecuing, and barbecuing makes me think about ribs. I mean other than a big T-bone there’s not much more manly than Ribs! And if you’re looking for something different, take a peek at these Spicy Jerk Ribs with Sweet Chutney Glaze.

I’ve become a real fan of making somewhat “untraditional” ribs (like my Cider Glazed Ribs) with a dry rub and then finishing them with a glaze rather than a basic barbecue sauce. I still do more “traditional” ribs, too, like my Competition Ribs but these are definitely more unexpected, and they’re succulent and juicy with just the right bite and flavor for days. I love the way the sweet glaze plays off the spicy jerk rub.

Even though I’m giving you three options for these ribs, Instant Pot, Oven, or Barbecue, I gotta say the easy way out is using the Instant Pot to cook these ribs to lusciousness. Then they can be glazed and put under the broiler or finished quickly on the grill -. Unless you like to or have the time to tinker and smoke or don’t mind heating up the kitchen, of course.

Here in Minnesota, summer’s been a bit of a tease. A few really hot days punctuated by rainy and/or cold days. The cool days are nice for yard work, though, and that’s leaving little time for anything else. Usually, by Father’s Day, my yard is in shape and I’m enjoying the fruits of my labor. Not so much this year!

My yard was devasted by my time spent in South Dakota helping my folks. That was bad enough, but last summer, a giant willow went down taking five more trees, oaks and maples along with all the bushes, plantings, and grass in both my side yard and on the city side where there’s a bike path. And the piece de resistance? Neighbors ground-feeding animals that decimated my perennial garden and a good part of what was left of my grass.

Garden about 5 years ago, before I went to South Dakota to help out my folks.

my poor rose neglected; you can see many plants missing from squirrels, chipmunks, rabbits

My son, Kraig and his girlfriend, Tweety, have been out multiple times helping me remove leaves, cut grass, clean out garden beds, cut plants back, put down landscape fabric and mulch. And Tweety, bless her heart planted four trees, courtesy of the city and their annual Arbor Day giveaway. And I, on my hands and knees, with pretty much one useable arm, over a month-long period, removed three 55-gallon bags of sunflower seeds and rabbit poo, along with the top inch of topsoil in my garden.

With a little selective sight and a few hardy plants blooming, my bush rose, peonies and beloved Siberian Iris, I’m at least seeing the hope of what’s to come from our labors.

But that leaves little time for any fussy cooking. The grill IS out and somehow escaped the hoard of squirrels that invaded my porch and garage but with all this work going on, plus a two-week break for my daughter’s wedding in Atlanta, I’m all about easy…and I gotta say while barbecuing ribs takes some time and skill, dropping these ribs in the Instant Pot or slowly cooking them in the oven is more my style these days.

Over the years, I’ve pretty much gotten ribs down pat. Except for when I made them in Atlanta and had a big fail over that much-anticipated dinner, along with several other cooking failures! I still don’t know what went wrong (attention span?) but those ribs were awful. Go figure, food blogger, huh?!

And then I came home and made these beauties. I know everyone has their own way with ribs, but this method works for me, every time – umm except when I was feeding my daughter’s family! Sorry, Sweet Pea!

I almost always make spare ribs rather than baby backs; I like the meatiness. I put on a dry rub the day/night before, whatever works. Then I wrap the ribs tightly and put them in the fridge, on a sheet tray or in a casserole to catch any drips. Day of, unwrap, and then either smoke, slowly bake, or put in the Instant Pot.

Ribs are done when they can be bent and are close to breaking, with a definite crack to the meat. They should be just holding together, and not quite falling off the bone.

When oven or IP cooking, the ribs need to go on the grill or under the broiler for about five minutes, either without, or in this case, with a glaze. Sometimes I serve the ribs dry, but usually only when I smoke. When cooking in the IP or in the oven, those ribs need a little extra love.

Since these are made with my homemade (or storebought, if you prefer) Jamaican Jerk Spice Rub, I wanted my glaze to tone down the heat – that’s why I chose to go with something a bit sweet. I thought about a peach barbecue sauce but in the end, I was making a salad that had a little chutney in the dressing, a roasted sweet potato salad, and that inspired this glaze.

The glaze is simple: 4 Ingredients. Heat, then blend if you don’t want chunks, then reduce it to sticky deliciousness, pour over ribs, and slather them up. I would recommend not putting quite as much glaze on the ribs as I did in these photos, btw; let some of that jerk flavor shine through. You’ll likely have a bit of glaze left over; it’s just about impossible to make a tiny amount. Serve alongside, mix with some bbq sauce if you want or save it to glaze some chicken wings later in the week.

I really do watch the pricing on ribs and buy only when they’re on sale, which is usually around one of the summer holidays. They’re heavy enough that a variance in the per pound pricing makes a big difference in the total cost. Buy the ribs that are smaller if there are different sizes available. They’re usually from a younger beef and may be a bit more tender.

Here in the Twin Cities, and most places I know of, your spare ribs are going to be untrimmed. I always trim them in St. Louis Style. See my post on Competition Ribs to see text and photos on how to break them down and prepare them. And whatever you do, don’t waste those trimmings! I have a few ideas on that same post on how to make best use of them. A lot of people just use them as a “chef snack” but why, when you can usually get a whole ‘nother meal out of them?

Whenever I cook a pricier protein like ribs, I always try to make sure there are lots of sides. It helps stretch it a bit. I’ve served these ribs with my Doctored Up Canned Baked Beans and a Potato/Sweet Potato Salad, coming soon. And since this is a Father’s Day dinner, save room for dessert!

Prepare ribs as directed (see Competition Ribs) by trimming if necessary and removing the membrane. Sprinkle about a teaspoon of soy sauce on the backside of the ribs, then sprinkle with a good heaping tablespoon of the rub if using the Instant Pot, a little more if oven roasting or smoking. Turn over and repeat on the topside. Gently pat on to ribs if needed; do not actually rub. If time allows, wrap and place in refrigerator overnight.

Set up grill for indirect heat (See PDF) with desired wood chips. Place ribs, bone side down over drip pan filled with two to three cups water. Cover and cook at 225 degrees F. for four to six hours, until done. Replace wood chips and water as needed. Glaze if desired, placing ribs on the hot side of the grill until the glaze has darkened and is bubbly.

Preheat oven to 300 degrees F. Place ribs on a rack over a large foil-lined, rimmed baking sheet. Place in oven and add a cup and a half of water to the pan. Roast until done, adding more water as needed. Cover the ribs with additional foil after one hour of cooking. Total time will be about 2 1/2 to 3 hours. Remove the pan with the ribs from the oven. Drain the liquid (save if making soup) and place ribs back on the pan.

Brush ribs with glaze and turn on broiler and broil ribs, about six inches away from the element, until the rub becomes bubbly and caramelized.

To cook in instant pot:

If you wish to cook two racks of ribs, do not cook trimmings at the same time; there will not be room. Timing and temperature remain the same.

Add one cup water to the bottom of the Instant Pot and rack if there is room. Curl ribs and place in Instant Pot vertically, trimmings in the center. Seal and cook on High Pressure for 25 minutes. Allow to go to the keep warm function and after 20 minutes, release the remaining pressure. Place ribs on a foil lined pan.

Sprinkle with more rub, a little or a lot, depending on your preference. Drizzle with glaze and gently spread over the ribs. Turn on broiler and broil ribs, about six inches away from the element, until the top becomes bubbly and caramelized.

Note on trimmings: Never waste those trimmings from the ribs; the meat is flavorful and works so well for so many recipes. Cook alongside the ribs in any of the above methods; generally, trimmings will be done before the rack of ribs is ready. If trimmings are small pieces, they can be wrapped in a bit of foil. If you have no plans for using them, label and freeze them.

In a small pan, add all ingredients and heat until warm, whisking now and then. Add to blender and whiz until smooth. Pour into pan, then use 1/4 cup water to rinse the blender; add that to the pan. Bring to a boil and simmer for a minute or two until slightly thickened. Remove from heat. Glaze will thicken more as it cools.

Note: I used the rest of the chutney leftover from making my Potato/Sweet Potato Salad. The amount isn’t particular. Taste and adjust ingredients adding more honey, bbq sauce or lime as desired.

I’ll be sharing Spicy Jerk Ribs with Sweet Chutney Glaze at Fiesta Friday #280. The hosts this week are Angie of Fiesta Friday and  Ai @ Ai Made It For You.

One thing that hasn’t failed me is the bridals veil topping my wall – it thrives on neglect!