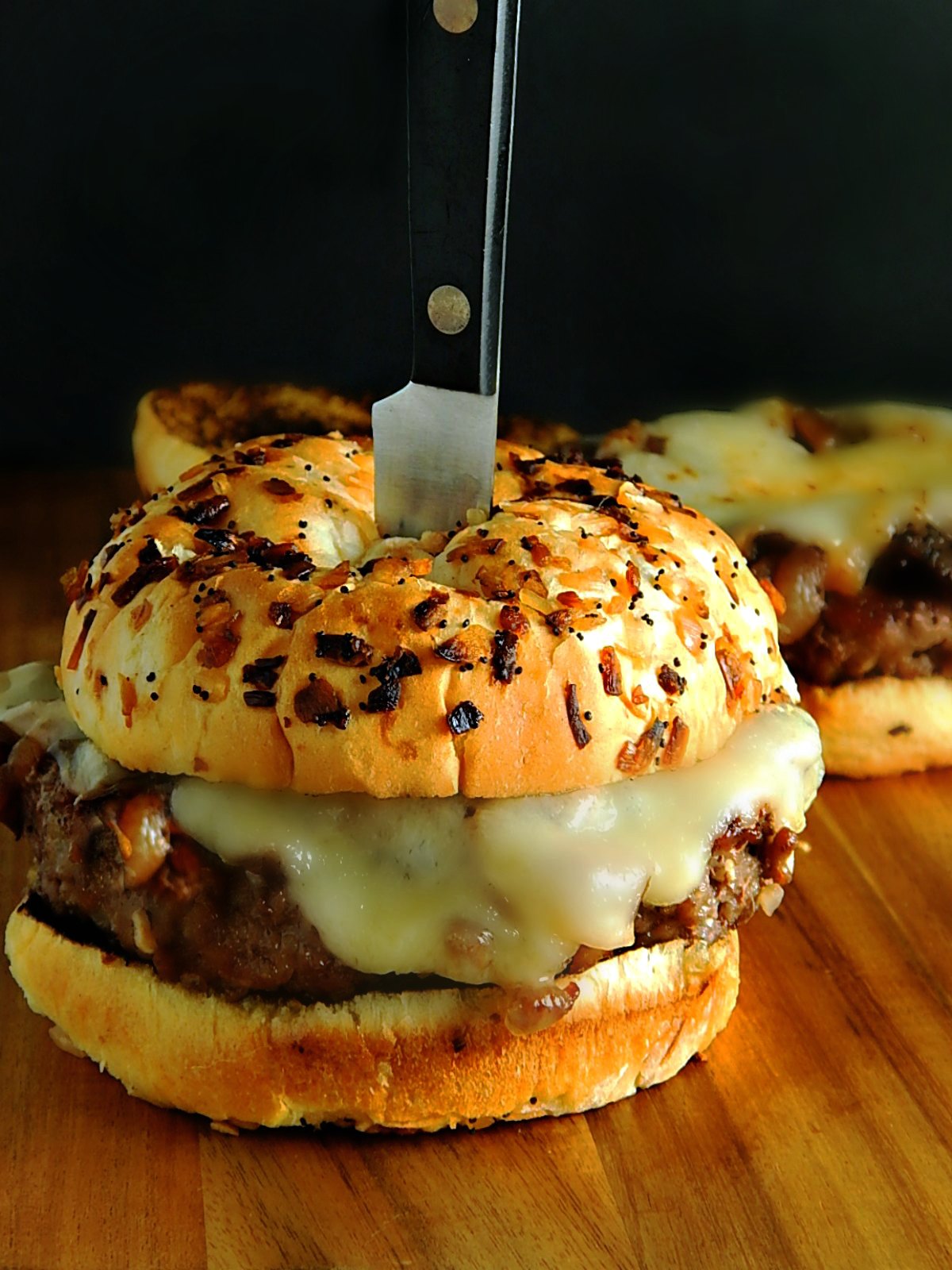 I have finally found a burger that I just want to eat all the time. And I’m not normally a big burger person! These French Onion Soup Burgers are everything a burger should be!

They’re juicy and super flavorful and can I just say Caramelized Onions and melty Provolone or Gruyere and an Onion Bun just to drive those flavors home? Do I even need to say anything else?

I guess I can say go forth and make French Onion Soup Burgers. At your earliest opportunity. See, when French Onion Soup Burgers first came on my radar, I was intrigued. I was helping my folks out in South Dakota at the time, and they are just salt and pepper and grill the burger people. And when they say grill, they mean just barely give it a lick of time. So I put this burger on the back burner, so to speak. But I kept thinking about them.

Honestly, I didn’t really connect to using French Onion Soup Mix in my burgers right away. I thought that the reference was to the caramelized onions and cheese, and it is, but a touch of the mix takes these burgers in such a tasty direction. Then the Caramelized Onions and cheese just take them over the top. A touch of brandy or Sherry in those caramelized onions really makes the burgers, and just the tiniest bit of thyme makes them mimic my favorite French Onion Soup Recipe.

If you follow me, you probably know I’ve been having a bit of a love affair with the French Onion Soup Mix ever since I came up with a recipe of my own. I think I’ve started what can only be called a collection of dishes. Now I know a lot of you are wise to how many ways there are to use that French Onion Soup Mix, but I was a bit behind the curve. I was never a fan of it for a few reasons. It’s a little costly, I wasn’t happy with all the ingredients and I just wasn’t that familiar with it. I used to sprinkle it on a pot roast now and then if I was in a rush and toss the roast in the oven or slow cooker, but that was pretty much the extent of it. So now I’m becoming quite a fan. (See my post on That Old Lipton Onion Soup Pot Roast Recipe if you’re interested. I know ya gotta use that second packet of French Onion Soup Mix!)

The burgers themselves are just super easy to make. I usually make burgers about four to a pound, about 4 ounces each but for these I wanted to go big, primarily because I wanted to use the onion buns and those are pretty huge. So I made each burger about six ounces and used about a tablespoon and a half of the Lipton’s Onion Soup Mix per burger. That would be about a packet for 24 ounces (4 burgers) if you’re buying your Lipton’s Onion Soup instead of mixing it up in bulk like I do at my house. It’s really not that particular if you use a little more or less because there’s so much else going on with these burgers. (And on these burgers!)

The star of the show, here, is really the caramelized onions tossed on top. Now it’s not that big of a deal to make just a few caramelized onions, but if you’re going to be doing these burgers for a crowd and want to make a big batch of them, check out my post with links to Three Ways to Caramelize Onions. For this recipe, though, I have an easy shortcut method that just takes minutes for a small amount of onions but will give you truly really caramelized onions, tender, silky and juicy.

Keep in mind that caramelizing onions isn’t an exact science and you’ll need to babysit them a bit and use your judgment. I start my caramelized onions with butter and a bit of water, then let them cook at a good simmer, covered until they’re soft and starting to brown up a bit; see all that time normally spent sauteing is sped up by the kind of half steam/half simmer method. Then the lid comes off, and I stir them every minute or so as they brown up, adding a bit of water so the beautiful caramelization doesn’t burn and comes up off the bottom of the pan and coats the onions. Eyeball it and keep them moving. When they’re just about done, add a dash of brandy or Sherry, let it cook off just a bit and you’re done.

French Onion Soup Burgers – I love the caramelized onions bubbling up through the cheese!

Anytime you’re talking big burgers and specialty buns, you’re really getting out of the realm of a truly budget dinner, so burgers like the French Onion Soup Burgers could be considered a bit of a splurge. There’s no better time to splurge on burgers than around a Summer Holiday, though, when ground beef is very likely to be at an absolute low and you can bet burgers at home like this are a fraction of the cost of a restaurant burger! I figured the cost of four burgers and buns as shown (I had to find a use for the extra buns) ran about $5.79, total, for the four, not for each burger.

Labor Day is coming up and it’s the last of the Big Three Summer Holidays; Memorial Day and the Fourth of July are the others. You’ll really want to take a look at all the specials and stock up. I’ve written this post to help you out. Many of the items you’ll see on sale won’t be at a low again until next summer. If you like burgers, ribs, etc., pick them up now and toss them in your freezer. At the very least, stock up on condiments. There’s gonna be a “Hail Mary” for ground beef and condiments around the Super Bowl, too, with some fabulous but maybe not rock bottom pricing.

A bit of savings is coming from the Homemade Lipton Onion Soup Mix. If you’re a couponer and really watch the sales, you can probably pick up the mix for a pittance, but if not, mixing your own takes only minutes and you’ll have the option of choosing your ingredients to fit your tastes and budgets. You can control the quality make it organic, low sodium or just downright cheap if you choose. The packaged soup mix is $1.41 at Amazon.

Mix ground beef with onion soup mix; set aside to rest as the onions are caramelized.

Add the butter to a skillet, when hot, add the onions and thyme and about 1/4 cup of water. Add lid and allow to simmer for three or four minutes until onions are tender are the water is nearly evaporated. (Check during cooking time to make sure all the water hasn’t evaporated early.) Remove lid and continue to cook, stirring often and adding a splash of water now and then if the onions are beginning to darken unevenly and stick to the pan. When onions are soft and beautifully browned, add dash of the brandy or Sherry and remove from heat.

Place a dent in the top of each burger so they’ll cook up flat and not rounded. Cook on the stovetop in a medium-hot pan or on the grill over medium-high heat, turning once, for about three minutes on the first side. Turn and add a spoonful of caramelized onions and a slice or two of cheese to the top of each burger, lower the heat to medium and continue to cook until burger is desired doneness, two to four minutes longer. Cover if needed, for a minute or two to get the cheese to melt.

In the meantime, brush the cut side of the buns with butter or oil and toast in a hot pan or on the grill.

We like ours at 143 degrees F. which is just slightly pink in the middle.

If you need more or less than four burgers, for each burger:

I’ll be sharing my French Onion Soup Burgers at Fiesta Friday #239, hosted this week by Antonia @ Zoale.com and Lathi @ From Lathi’s Kitchen