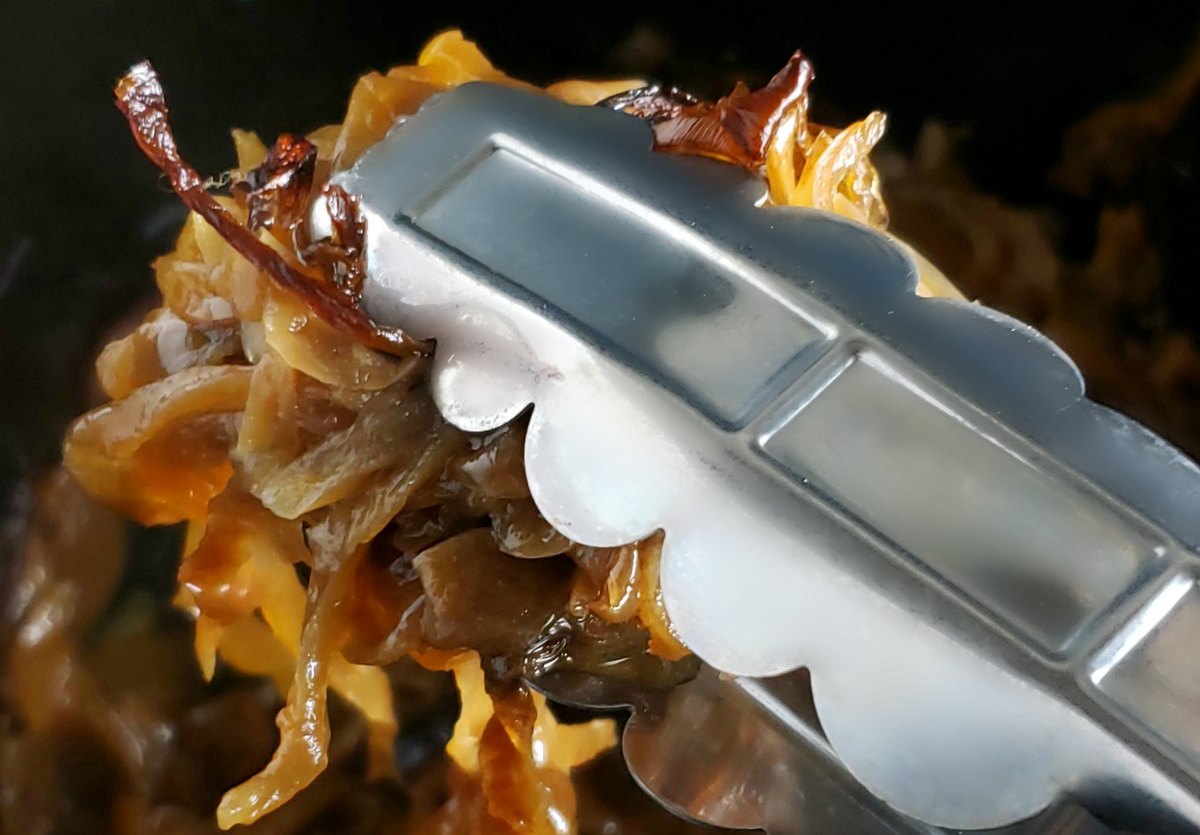 I love love love me some caramelized onions and just about anything I can think of that can be made with them. I’m guessing you do, too, or you probably wouldn’t be here looking at this post, Caramelized Onions Three Ways. All of the recipes I use call for three to four pounds of onions, more on that below and all make absolutely stellar Caramelized Onions. If you want to make a smaller amount, you’ll probably want to use the Stovetop Method.

Let’s talk basics. The National Onion Association (I’ll cite NOA a couple of times in this post and you’ll see a couple of their charts) describes the process of caramelizing your onions:

Caramelized onions are so crazy good. The thing is they’re time-consuming, at least if you want onions with a deep rich flavor and just the perfect, tender bite. It’s gonna take a good amount of time and effort and maybe even a few tears! (Some great hints on that, below.)

Oh, you can probably knock off just a few, say for a quick burger topping in 30 to 35 minutes or so, but to make a larger quantity can be quite an undertaking. All three of the methods below help to shortcut the standard method of just standing at the stove and stirring.

And speaking of time, Tom Socca wrote an article for Slate, “Layers of Deceit” subtitled “Why do recipe writers lie and lie and lie about how long it takes to caramelize onions?” So he’s a little dramatic, but everything he says is so true!

Bon Appetit talks about three different kinds of caramelized onions each one cooked to a different state. Personally, I don’t consider the lighter ones to be fully caramelized but do keep in mind that how caramelized your onions are is in your control. You can stop at any stage.

The Three Ways to Caramelize Onions:

I have three different ways to caramelize onions on my site! Each has advantages and drawbacks. I have been working on updating all these posts with step by step photos and text, so the recipes are there; the new look, improved posts will be coming soon.

All three are going to give you stellar caramelized onions. Here I’m talking about cooking time, not including the prep time for peeling and cutting and all recipes call for two to four pounds of onions, although I usually make four pounds at a time. More on that below under Big Batch:

The Best Onion to Use to Make Caramelized Onions:

First of all, for the easiest job, use large onions. That’s just because it will take much less time and effort to prep them. If you use small onions, you’ll lose so much when they’re trimmed and peeled that you might want to add additional onions to your recipe to make up for it.

Any onion will caramelize given enough time. Here are a few general things to consider:

The recommended type of onion to caramelize (according to the National Onion Association & Bon Appetit) is the common yellow onion. They caramelize beautifully and have a rich, savory flavor. There are many varieties, but we’ll see two main types here in the States at our grocery stores.

All have higher moisture content and are sweeter than the common yellow onion. They will caramelize, but do so carefully; the additional moisture means longer cooking time and they can become mushy. A workaround is to cook until browned, drain off the juices, reduce the juices and then add the onions back in to finish and caramelize.

From the National Onion Association

The Best Way to Cut Onions for Caramelized Onions:

Do yourself a favor and get large onions. Smaller onions will take more work to peel and you may need to add an onion or two to your batch to make up for the additional loss from peeling. If you have a scale use it, or weigh at the store when you buy, or estimate from the number of pounds in the bag. You will always want to cut pole to pole for the best texture, and all the recipes I use call for cutting 3/8ths of an inch thick.

If cutting by hand, sharpen your knife. A food processor will work but it’s nearly impossible to cut pole to pole and has to be constantly emptied as you work. Personally, just for quality, I’d cut by hand before using my food processor.

If you have a kitchen slicer, a cheapie runs about 30 to 35 bucks, use it and you can have pounds of onions sliced perfectly in minutes after you have them all peeled. How fast? Less than a minute a pound. Four pounds takes about three minutes.

You are only limited by your imagination! Do try not to stand in front of the fridge just eating them by the forkful as I’ve heard some people say they do! And they are that good! They are your onions, though so if you must, lol.

Caramelized onions may be stored in the refrigerator or the freezer.

Freezing: You may wish to freeze in several sizes according to your planned use for them in the future. Cool before freezing, label, and date the packages.

No More Tears When Cutting Onions:

According to the National Onion Board (I’ve spent a lot of time on their site!) When an onion is cut, sulfur compounds mix with alliinase enzymes, which irritates the eye and brings on the teary experience.

If you’d like to see a little more science and info about these methods, check out this paper from the University of Bristol on The Lachrymatory Factor in Onions. Greatist has also reviewed some of the methods below.

Here’s the bottom line on what works and what doesn’t to deduce tearing when cutting onions:

I rarely caramelize a small number of onions unless I’m really pressed for time and some of the recipes on my site that use a smaller amount are actually made with a portion larger batches.  Of course, I state so and direct you here or to one of my posts so you can do the same.

It does take more time to caramelize more onions but it maximizes your time and has a big payout! Just think: Onions for your recipe and more to use in something else or to freeze. To me, there’s no sense in spending 30 to 35 minutes caramelizing a few onions when I can literally do pounds of them in 15 to 20 minutes more on the stove or use one of the other, easier methods.

It also, obviously, takes more time to prep that many onions, so when I know I’ll be making a recipe that has caramelized onions, I usually plan ahead, buy more onions and make them a few days before I need them when I have the time.

Four pounds also is a great amount to fit in my Dutch oven and four pounds works well in my slow cooker, too. My standard slow cooker will hold more onions; four pounds take it about 2/3 full but it does increase the cooking time past where I’m comfortable, but that’s me. You do you.

Although I prefer to use olive oil, butter or a mix of both, some people caramelize onions dry, especially if they are using the Slow Cooker Method. I personally have never tried caramelizing onions with no fat at all.

You’ll see many additions to Caramelized Onions and none of them are necessary, although some enhance the onions:

I hope you found this information useful! I’d love to hear your comments; let me know if I’ve missed anything, what your experiences or fave tips or tricks are (do tell!!) and what works for you and doesn’t!! Comment below and please feel free to share on social media or link up!

I’ll be sharing at Throwback Thursday and Fiesta Friday #112, hosted by Angie and co-hosted this week by Natalie @ Kitchen, Uncorked and Hilda @ Along The Grapevine.