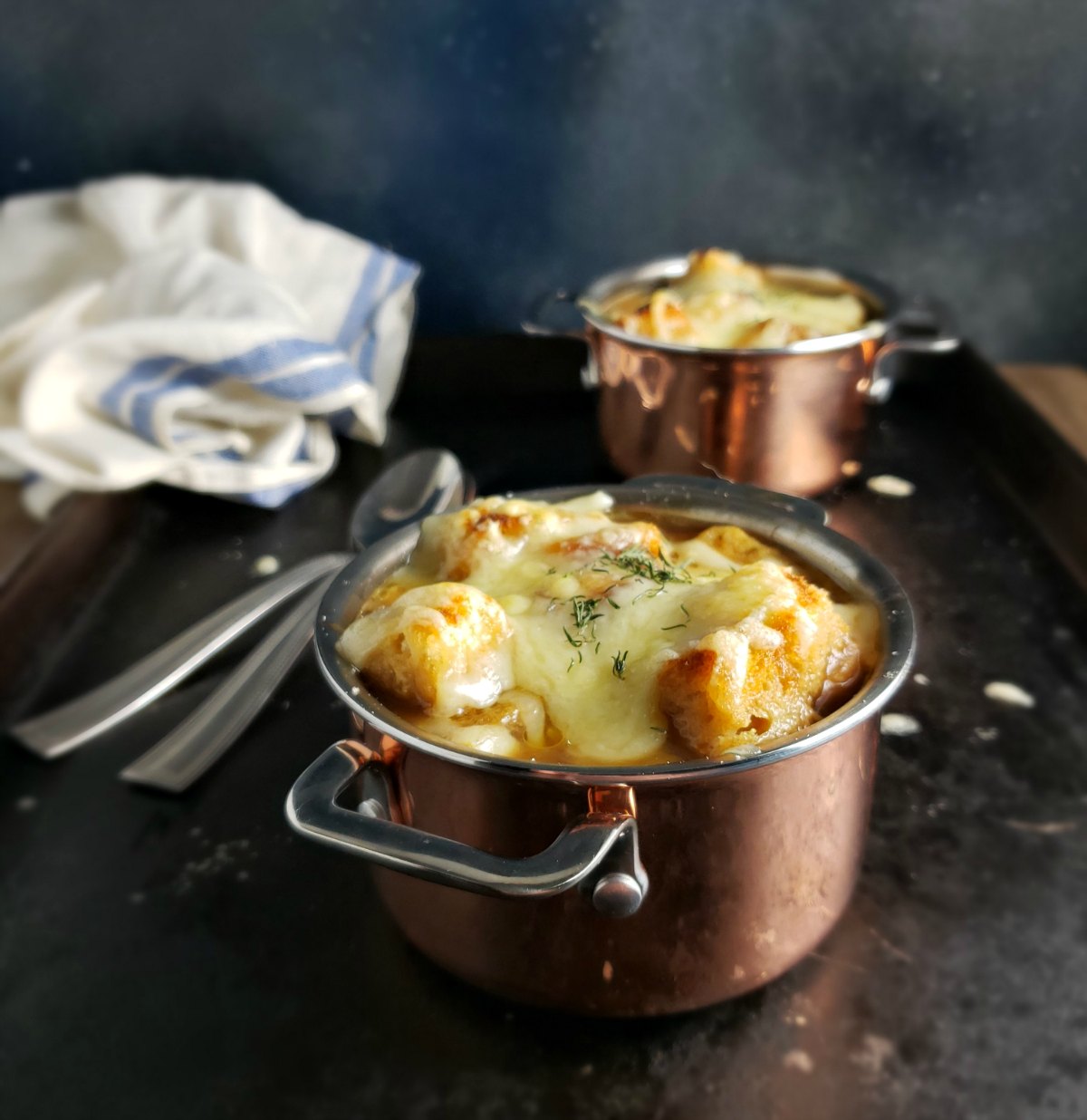 I love love love me some French Onion Soup! It’s just a beautiful thing and I fell in love with it at my first bite, decades ago! For St. Patrick’s day, though, I wanted to change things up. I’ve been dying to try out one of the Guinness & Onion Soup recipes I’ve seen floating around. Here’s my version, Guinness Onion Soup with White Cheddar Croutons.

This is seriously one of the best Guinness soups you’ll ever make. It’s an absolutely glorious concoction that rides that fine line between the sweet richness of those silky caramelized onions and the dark Guinness accents. And the croutons, layered with white Cheddar, all melty and broiled to perfection top it all. I’m getting hungry just thinking about it!

I’m going to give you some fair warning here. First of all, it’s no small feat to make a really great French Onion Soup whether it has Guinness in it or not. It’s not “difficult” and doesn’t require a high skill level but it takes a good bit of time and effort and there are, of course, multiple stages involved. Over the years (and I’ve been making French Onion Soup for at least 40 years) I’ve found a few ways to make it much easier.

Most of the recipes you’ll find for Irish Guinness Onion Soup have pretty much the same ingredients, and some even claim to be “easy” but it’s how you work with those ingredients that are going to make the difference between maybe a “one-off” recipe that’s ok (especially after a Guinness or two) but is kind of a novelty for St. Paddy’s Day compared to something wondrous, crave-worthy and OMG you have to make this every year (or maybe every week) delish!

Feel free to jump ahead to the recipe if you want. I suspect that many of you that want to make Guinness Onion Soup may be intrigued by this “Irish” recipe and maybe haven’t’ made any onion soup before. I’ll walk you through the steps & tricks to make a fabulous Guinness Onion Soup that’s going to turn out the first time. When you’re done you will probably know more than you ever want to know! But that’s so much better than not knowing what you need to know! None of these steps are difficult but each one is gonna up your game on this soup or any French Onion Soup!

IF Possible, Make Your Soup Ahead:

You can make this soup up to five days before you need it and then heat, top with the croutons and cheese when you want to serve it. The croutons can be made ahead, too and stored in an airtight container; I’d only make them a day or two ahead. There are a couple of reasons to make your Guinness soup ahead; the most important? It just tastes better!

Three pounds of onions can take a while to prepare. If cutting by hand, sharpen your knife. A food processor will work but it’s nearly impossible to cut pole to pole and has to be constantly emptied as you work. Personally, just for quality, I’d cut by hand before using my food processor. If you have a kitchen slicer, a cheapie runs about 30 to 35 bucks, use it and you’ll have them sliced in about two minutes after you have them all peeled.

Do yourself a favor and get large onions. About five or six very large onions will make three pounds. If you have a scale use it, or weigh at the store when you buy, or estimate from the number of pounds in the bag.

The onions are the basis for everything good about this soup (well, except for the cheese!). You want them silky, spoon tender, caramelized to dark deliciousness. That takes time and for this amount, a LOT more than the 15 to 30 minutes cited in most recipes. If you think I’m shining you on, ya gotta see this article from Slate: “Layers of Deceit” Subtitled “Why Do Recipe Writers Lie About How Long It Takes to Caramelize Onions?” Note that Tom Socca, the author, wasn’t making three pounds of onions; that takes even longer.

I’ll give you three methods to choose from & I have been working on updating all these posts with step by step photos and text, so the recipes are there; the new look, improved posts will be coming soon. All three are going to give you stellar caramelized onions. Here I’m talking about cooking time, not including the prep time for peeling and cutting:

This is what three pounds of sliced onions looks like

The Stock for Guinness Onion Soup with White Cheddar Croutons:

You have got to have a good stock for this recipe or you’re not going to like the soup. And you might blame me! Whatever stock you buy, taste it and if it’s awful, don’t put it in the soup. I’ve had some bad stock in my life and a recently a horrible experience at Costco with a sample of an all-organic bone broth. I was too polite to spit it out!

All the salt in your soup is absolutely under your control and most of it will come from any salt in the stock. Different stocks have different salt levels. Taste that stock before you think about adding any salt and taste the soup when it’s finished, too, and add only what it needs.

Hey, maybe you have a brand you can recommend to me? I’m all ears!

Talking About the Guinness & the Hooch:

First, let’s talk about Guinness. You’re going to want to Guinness Draught and not the Guinness Extra Stout or any other variety. For years the Draught was only available by the bottle but now comes in cans, too. If you have a can, open it and let it sit for a few seconds. It has a little widget inside that needs to do its work. Fun fact: how to pronounce Guinness Draught.

Whether using a can or a bottle when I cook with beer I pour it into a glass (pour down the side for less foam) and let it sit for at least a few minutes, but an hour or longer is better. You want it flat and at room temperature if possible. And drink the rest. An old friend from Ireland taught me a trick top my Guinness with a single shake of salt before drinking.

You need to balance those flavors when the soup is done and do it along with adjusting the salt and pepper in the soup. Your best bet is to taste and adjust and add a little sumpin’ sumpin’ sweet to the recipe.

I call for a brandy, sherry or whiskey in this soup. Know your tastes. If you love what’s in it, you should love this soup. I do like the brandy best, find the sherry a little sweet and am not that wild about any Whiskey. I gotta admit there’s a little more street cred in announcing you’ve used your fave Irish Whiskey in the soup, though! Sometimes I skip the brandy, sherry or whiskey altogether. It adds a little sumpin but it’s not critical to the recipe.

The Cheese & Croutons for the Soup:

For me, this is a special occasion soup and I don’t skimp on the cheese. It MAKES the soup! Admittedly the Cheesy Factor in this soup is over the top. And if you want to shortcut, you can use a single piece of bread and just add a little cheese on it. Get a good baguette or a hearty bread if possible. preferably not a soft “Italian” loaf from the store bakery. Something that’s going to give you crunchy, chewy croutons.

Check out my Savings on St. Patrick’s Day, which has a few ideas on how to save on some of these items. Shop well for your onions. I’ve had great luck at finding big beautiful onions at a great price at Costco (bigger onions are easier to deal with while cutting) and ok onions at Aldi. Check the mesh bag carefully, sometimes a not great onion or two will be lurking in the bag. At the grocery, check the bulk vs. the bagged onions.

The stock or soup is the greater cost in the recipe. I normally stock up when it’s on sale during the Winter Holidays and during the Easter/Lent sales, but I’ve seen good prices at Aldi and Costco. Their prices don’t even touch grocery store prices, though when they’re on sale for a big holiday.

If you don’t want to spring for an Irish Cheddar (I’ve seen it at Costco and they sometimes have Vermont Cheddar) Aldi has a decent white Cheddar and even the grocery stores these days have white Cheddar that’s pretty good. A great French baguette is great as a crouton but your grocery store take and bake (or Aldi’s) work very nicely if your store bakery doesn’t carry baguettes.

I hope you love this Guinness & Onion Soup as much as we do. I promise you’re gonna look like a hero when you bring it to the table! Have a happy & safe St. Paddy’s Day and sláinte!

Add caramelized onions and any juices from the process to a large Dutch oven or pan. Add Brandy, Sherry, Whiskey or Bourbon, heat through. Ignite if you feel comfortable and allow to burn down. Stir in Guinness and cook, stirring frequently, until reduced by half, about 3 or 4 minutes.

Stir in broths, 2 cups water, thyme, and 1/2 teaspoon salt and increase heat to high and bring to simmer. Reduce heat to low, cover, and simmer gently 30 minutes. Remove and discard herbs if whole herbs were used, then season with salt and pepper. Taste for bitterness and add jam or sugar to taste, starting with about 1/4 teaspoon of jam or a pinch or two of sugar. Add more if needed.

While soup simmers, remove crust from bread, cut into 1/2″ cubes. Add to the teaspoon and toss with oil. The cubes should all be just coated. Spread to a single ng sheet and bake until bread is dry, crisp, and golden at edges, about 10 to 12 minutes, stirring once or twice and arranging as needed by hand. Set aside.

Adjust oven rack so the top of the croutons are about six inches from broiler element and heat broiler. Set individual broiler-safe crocks on a heavy baking sheet and fill each with about 1 3/4 cups soup, leaving about 1/2″ at the top for the croutons.

Broil until cheese is melted and bubbly around edges, 3 to 5 minutes. Let cool several minutes before serving. Sprinkle with a little extra thyme if desired.

You know I’ll be sharing at Throwback Thursday post as well as at Fiesta Friday 111 and at Freedom Fridays, & Weekend Potluck.