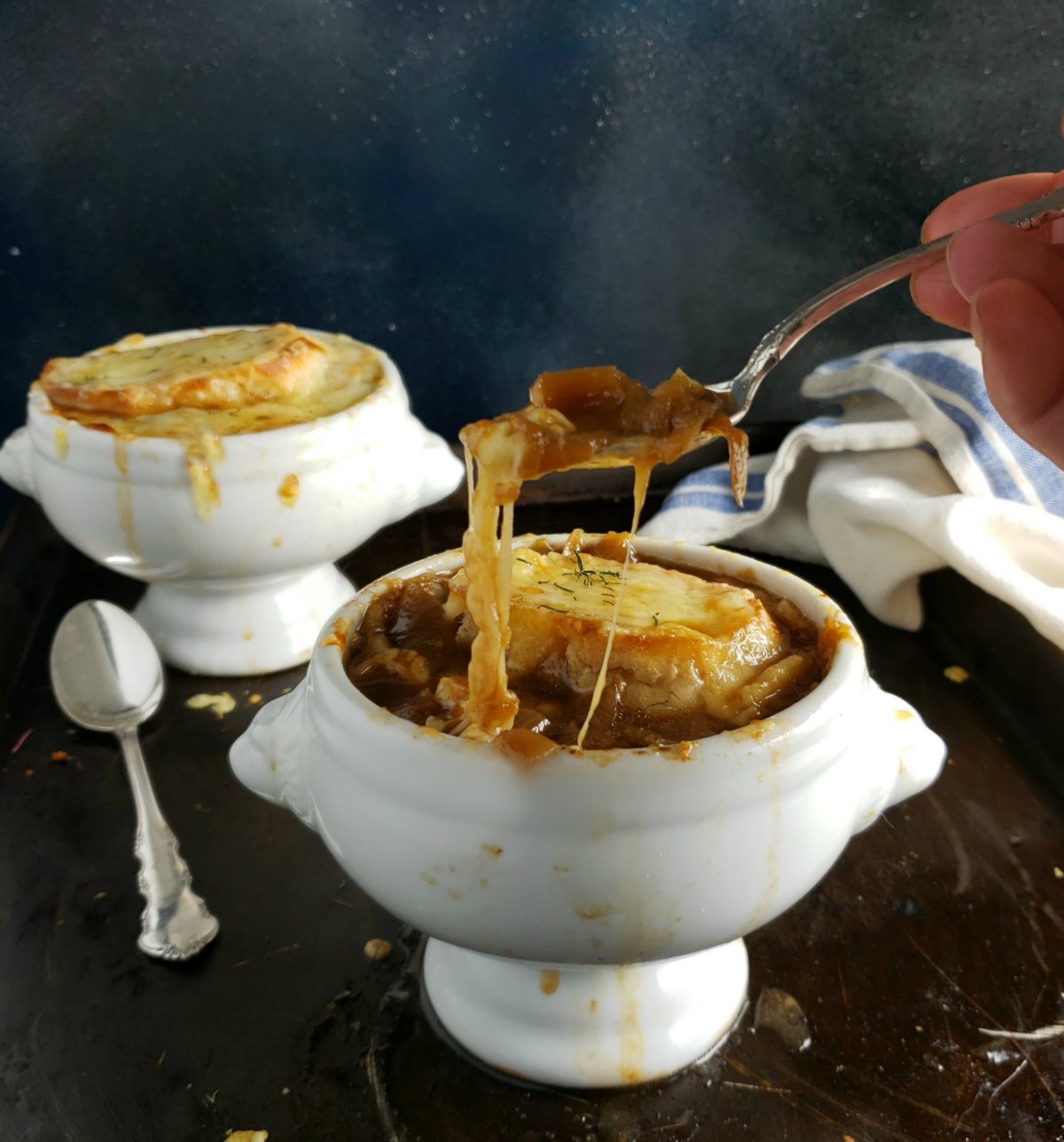 I do make other French Onion Soups (and love them, too) but it’s this recipe, these techniques that really taught me a lot about caramelization, technique, and flavor. It upped my F/O game for sure – and upped my game on many recipes!

I still get super psyched over French Onion Soup. That first bite, digging into the bread and cutting it with the spoon on the bottom of the bowl – then lifting it, the bubbly, melted cheese forming a string or two…gently blowing so my tongue won’t get burned until I simply can’t wait any longer. And of course, I still always burn my tongue!!

And while I think any French Onion Soup is usually good, the best part shouldn’t be just the cheese! The soup, itself should be outstanding, the onions beautifully tender, and the flavor? Transformative. This, guys, is the one. I just wish I had a bowl of it right now…oh, wait I do! Jealous? No need to be, just make your own! I broke down the recipe for you as best I could. It’s easy but revolutionary, and I think you’re going find it sooooo doable!

Like many good recipes, this French Onion Soup relies on little more than basic ingredients (but the right ones) and time. Lots of time along with a good bit of effort and some attention. That’s what I call “love.” If you’re wondering how long? It’s gonna be a project, but so worth it.

Preparing the Onions, up to 20 minutes:

Turning it into Soup, 35 minutes:

Some Weirdness in the Soup:

Slicing onions pole to pole is pretty easy, but a kitchen slicer is really the way to go! A cheapie is adequate for most casual home use and runs about 30 to 35 bucks.

There are other ways to take care of those onions other than this oven method. Check out my post, Caramelized Onions Three Ways with links and lots of info! You can use one of the other methods in that post to caramelize your onions, just use the four pounds of onions called for in this recipe.

Here’s what your onions will look like at different stages using the oven method. It takes a bit of time but is mostly hands off and the flavor is incredible! And you are left with perfectly caramelized onions (as opposed to onions that are just browned) with a bare minimum of actual hands-on work.

Saving Money on This Recipe:

I always think of onions as being cheap, but it’s the sheer amount of them that adds up for this recipe. Honestly, you’re going to want big onions if possible; small scraggly ones might be cheaper but you can spend a lot of time on them and if you use a lot of small ones, you’ll lose enough from peeling that you might want to add in a couple to make up for them. Look for large bags of onions, the onions are usually larger and cheaper by the pound.

I stock up on broth and stock when it’s on sale during just about any food holiday! Usually, I buy big around Thanksgiving/Christmas and again around Easter when the Easter/Lent Sales are going on. Grocery store sales are generally much better than you’ll find at Aldi or your Buyer’s Club.

Day-old bread is great for this but do shop carefully for any cheese. There’s no reason to ever pay full price if you’re shopping well. Packaged refrigerator cheese goes on sale too often, keeps for weeks in the fridge and in a pinch, can be frozen. It won’t be good for eating out of hand if frozen (it is crumbly when thawed) but still melts well.

I hope you enjoy this recipe as much as our family has over the last couple of decades!! Serve this and I’m sure you’ll get rave reviews and be elevated to hero status! Please pin & share if you like it. As in any recipe, you’ll want to read it through the first time and take it step by step.

Adjust oven rack to lower-middle position and heat oven to 400 degrees. Generously spray inside of heavy-bottomed large (at least 7-quart) Dutch oven with nonstick cooking spray. Place butter in pot and add onions and one teaspoon salt. (The salt helps draw out the excess moisture from the onions.) Cook, covered, one hour (onions will be moist and slightly reduced in volume).

Remove pot from oven and stir onions, scraping bottom and sides of pot. Return pot to oven with lid slightly ajar and continue to cook until onions are very soft and golden brown, checking the pan at about 40 minutes.

Stir and scrape the bottom and sides of the pan, then check every 15 minutes or so until they are soft and brown and nearly dry on the bottom. Remove pan if it appears to be in any danger of burning.

Note: The above is a deviation from Cook’s Illustrated – the first time I made this, following their directions my unions were burnt and dry the second time I checked them.

Carefully remove pot from oven and place over medium-high heat. Using oven mitts to handle pot, cook onions, stirring frequently and scraping bottom and sides of pot, until liquid evaporates completely and onions turn to a dark brown, 15 to 20 minutes, reducing heat to medium if onions are browning too quickly. Continue to cook, stirring frequently, until pot bottom is coated with dark crust, 6 to 8 minutes, adjusting heat as necessary. (Scrape any gooey fond that collects on spoon back into onions.)

Stir in 1/4 cup water, scraping pot bottom and sides to loosen crust, and cook until water evaporates and pot bottom has formed another dark crust, 6 to 8 minutes. If your onions are not a dark brown, repeat this step. (Look for the color in the bottom photo.)

Stir in sherry and cook, stirring frequently, until sherry evaporates, about 5 minutes.

Stir in broths, 2 cups water, thyme, bay leaf, and 1/2 teaspoon salt, scraping up any final bits of browned crust on bottom and sides of pot. Increase heat to high and bring to simmer. Reduce heat to low, cover, and simmer gently 30 minutes. Remove and discard herbs, then season with salt and pepper.

For the croutons & serving:

While soup simmers, arrange baguette slices in single layer on baking sheet and bake in 400-degree oven until bread is dry, crisp, and golden at edges, about 10 minutes. Set aside.

Adjust oven rack 6 inches from broiler element and heat broiler. Set individual broiler-safe crocks on baking sheet and fill each with about 1 3/4 cups soup, leaving enough room at the top for the croutons. Top each bowl with 1 or 2 baguette slices (do not overlap slices) and sprinkle evenly with Gruyère. Broil until cheese is melted and bubbly around edges, 3 to 5 minutes. Let cool 5 minutes before serving.