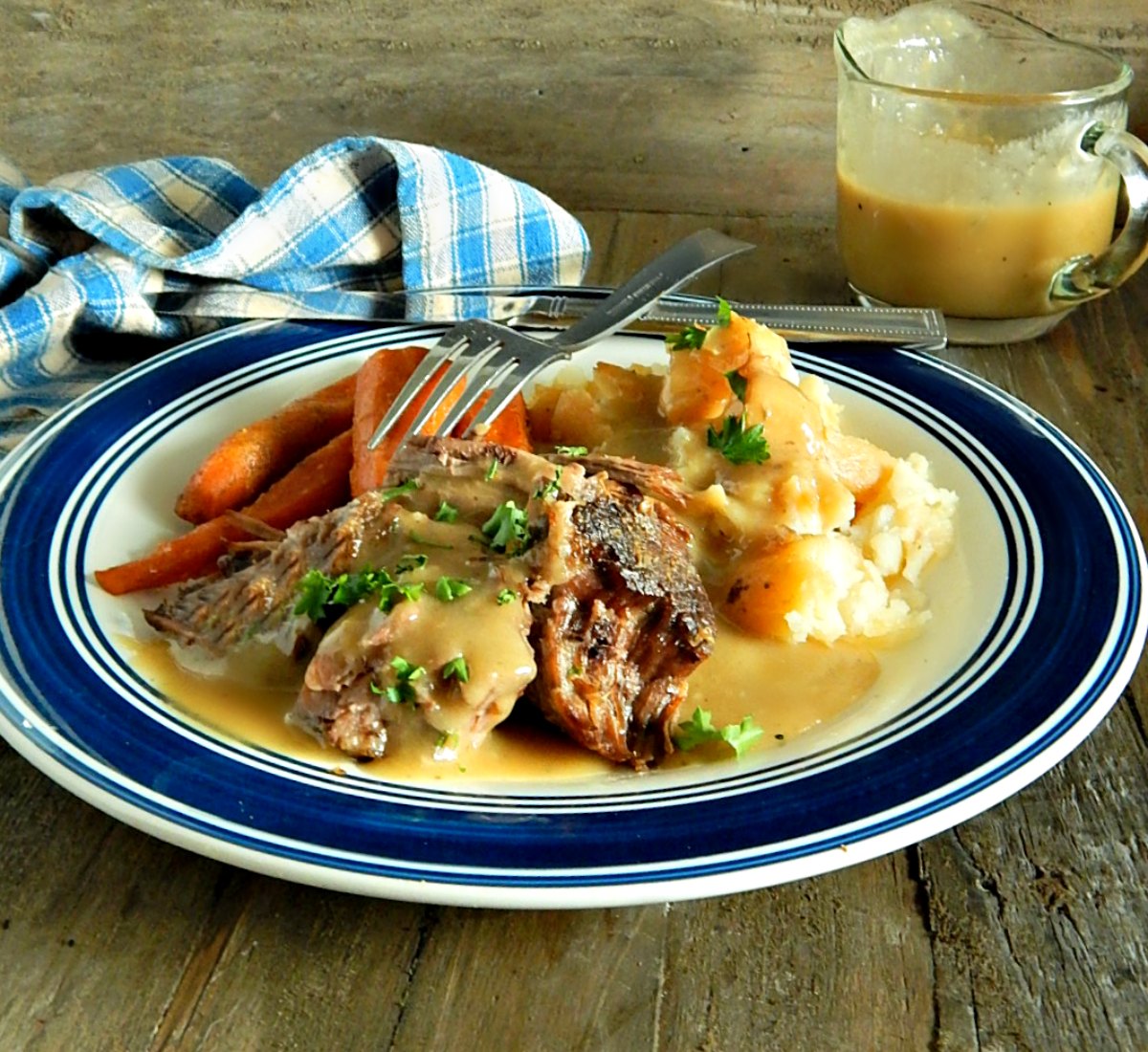 Not too long ago, I posted out the recipes I have on my site that were made with Lipton’s Onion Soup Mix. Or rather, my Homemade Onion Soup Mix recipe. There were quite a few more recipes than I thought but there was one glaring omission. I’ve never posted it because it’s so easy, it’s hardly a recipe. It’s that Old Lipton Onion Soup Pot Roast Recipe from the ’60s.

Yep, That Old Lipton Onion Soup Pot Roast Recipe is the pot roast my Grandma made, my Mom made and that I make, too. It’s a kind of no-brainer make the pot roast and get it in the oven or the slow cooker and forget about it kinda meal. The best pot roast ever for any fall or winter day!

Now and then I get asked, “What’s American food?” And by that, I don’t think people mean food recipes that morphed into being here in the States. It seems they’re more curious about what the average (as if there is an average?) American eats. Everyone probably has a different answer, depending on where they’re from. For me, the thing that comes to mind first, being from the Midwest, is “pot roast.” And specifically, this recipe.

I’m talking about a chuck roast, browned and slowly braised in the oven (or the slow cooker) till fork tender and just about falling apart. And you can’t have pot roast without those golden brown and delicious potatoes and chunky carrots that are so well seasoned from braising in that broth they don’t even taste like carrots anymore.

That’s the pot roast of my childhood, made with a good sprinkle from a packet of Lipton’s Onion Soup Mix. Don’t get me wrong, I make (and my Mom and Grandma) made other pot roasts (see my Beef Main Dishes) without a packet in sight but That Old Lipton Onion Soup Pot Roast is just so easy and to me, tastes like “home.”

Pot roasts, like That Old Lipton Onion Soup Pot Roast Recipe, were Sunday dinner fare, especially back in the day when Sunday dinner meant everyone gathered around and dinner was good enough for company, visiting family or sometimes, the parish priest. And Sunday dinners usually meant a dinner large enough to feed a crowd, with hopefully, a little extra to spin off into another dish or two later in the week.

Growing up, that wasn’t usually much. Mostly leftover gravy and if we were lucky, a few bits of diced roast served over white bread or mashed potatoes. I have a couple of spin-offs of my own and they’re an upgrade on leftovers for sure: My Bourbon Barbecue Pot Roast Sandwiches and a Pot Roast Shepherd’s Pie. And I’ll show you what I do with any leftover potatoes – my Mom’s American Fries.

There really is nothing too special to know about making That Old Lipton Onion Soup Pot Roast Recipe. I love cooking it in the oven but it’s just about as good tossed in the slow cooker. If you’re slow cooking, cook the pot roast all day on low so it’s ready when you get home from work, or maybe toss it in on a weekend day on high for a few hours so it can bubble away while you’re running errands. The chuck roast can be browned first. I usually do that, and I used to do that sometimes the night before (and peel the potatoes & carrots and put them in the fridge in a container of water so they wouldn’t turn brown) if I wanted to make That Old Lipton Onion Soup Pot Roast Recipe in the Slow Cooker before I left for work.

Sometimes people add a can or two of cream of mushroom soup so this recipe makes it’s own “gravy.” We never did that and just spooned some of the juices over our potatoes. Mostly because Mom would say as she pulled out the pot roast, “Nobody want’s gravy, do they?” We ALL knew that was a signal there would be no gravy because no one would dare say “I do!”

And goodness help me, of course I wanted gravy and always do. I think it’s the best part, so this recipe has the gravy I make from those juices and drippings! Yum! (I do have another super easy pot roast on my site, Campbell’s Ultimate Slow Cooker Pot Roast and yes, it does have the gravy made with a can of Cream of Mushroom Soup…and a little wine!)

When I make That Old Lipton Onion Soup Pot Roast Recipe in the oven, after I brown up the meat, I toss in the potatoes and turn them so they’re all coated with that flavorful oil. Then when I check the pot roast, about 3/4’s of the way through the cooking time, I give them another turn. It makes the potatoes especially delish. They get so nicely browned and a little crispy on the edges. You won’t want to do that if you’re cooking it in the slow cooker, though, because lifting that lid slows the cooking process down too much.

Much as I love Pot Roast I gotta admit some of these old-school country type meat & potato meals don’t always give the best “bang for your buck,” even though the Chuck is one of the least expensive cuts, sometimes less than ground beef. Shop for your meat well, picking it up when it’s on sale.

Try to squirrel a little bit of it away for a second meal before it’s served; you won’t need much (about 2 cups of chunked pot roast) to make my My Bourbon Barbecue Pot Roast Sandwiches or a Pot Roast Shepherd’s Pie. In my house, if I were to put the whole roast out on a platter, it would absolutely be inhaled with no leftovers at all, and a few leftovers are key to stretching that pricey protein over two meals. I like to plan for the leftovers and buy the ingredients at the same time when I make pot roast or any “big protein” meal.

Serve your roast with lots of sides; potatoes and carrots are not only traditional, but they’re also really some of the cheapest of veggies! Buy them in larger bags and the per-pound price is usually less. It wouldn’t hurt to serve That Old Lipton Onion Soup Pot Roast Recipe with a green salad or veggie, either. And if you’re going low carb, think about my Parmesan Mashed Cauliflower. Use it in place of the potatoes if you want, but goodness help me, I want the potatoes!.

Heat the oil in a 12-inch ovenproof skillet over medium-high heat. Add the beef and cook until well browned on all sides. Sprinkle with Onion Soup Mix. Tuck the potatoes in around the roast, turning to coat with oil. Add the carrots and celery. Pour enough water in to reach halfway up the side of the roast. Cover tightly and place in oven. Braise for 2 1/2 to 3 hours, until fork-tender, checking the liquid level about 3/4’s of the way through.

Remove beef & vegetables to a platter and cover to keep warm. Pour the juices from the skillet into a large measuring cup. Allow fat to settle on the top and skim off, adding about two tablespoons back to the skillet. Place skillet on a burner and heat to medium-high. Sprinkle flour over the fat and cook, stirring often, until the mixture starts to appear dry, about two minutes. Top off the drippings in the measuring cup with beef broth for a total of two cups, and a splash of wine, if desired. Whisking vigorously, pour the drippings into the pan. Bring to a simmer and cook until thick enough to coat the back of a spoon, leaving a distinct line when a finger is run through. Taste and adjust seasoning.

Heat the oil in a 12-inch ovenproof skillet over medium-high heat. Add the beef and cook until well browned on all sides. Place beef in slow cooker. Sprinkle roast with Onion Soup Mix. Tuck the potatoes in around the roast. Add the carrots and celery. Pour about 2 cups of water into the skillet the beef was browned in and scrape up any brown bits from the pan. Pour into the crockpot. Add additional water to reach halfway up the roast. Cover and cook on low for 8 to 10 hours or high 4 to 5 hours.

Remove the beef and vegetables from the cooker, cover and keep warm. Set the slow cooker to high and cover with lid. In the meantime, add flour to measuring cup and slowly add about a cup of beef broth, stirring to mix. Add a splash of wine if desired. Add mixture to slow cooker and whisk, until mixture thickens enough to coat the back of a spoon, leaving a distinct line when a finger is run through. Taste and adjust seasoning.

What to do with the leftovers from That Old Lipton Onion Soup Pot Roast Recipe:

I’ll be sharing That Old Lipton Onion Soup Pot Roast Recipe at Fiesta Friday #242, cohosted this week by Jhuls @ The Not So Creative Cook and Jen @ Apply To Face Blog. You’re going to love all the bloggers that share their best recipes of the week at Fiesta Friday but do drop by and see Jhuls. You’re going to love each creative recipe and take a sec to stop by and see Jen. She’s going to have you in stitches with a helping of her real-life stories along with each recipe.