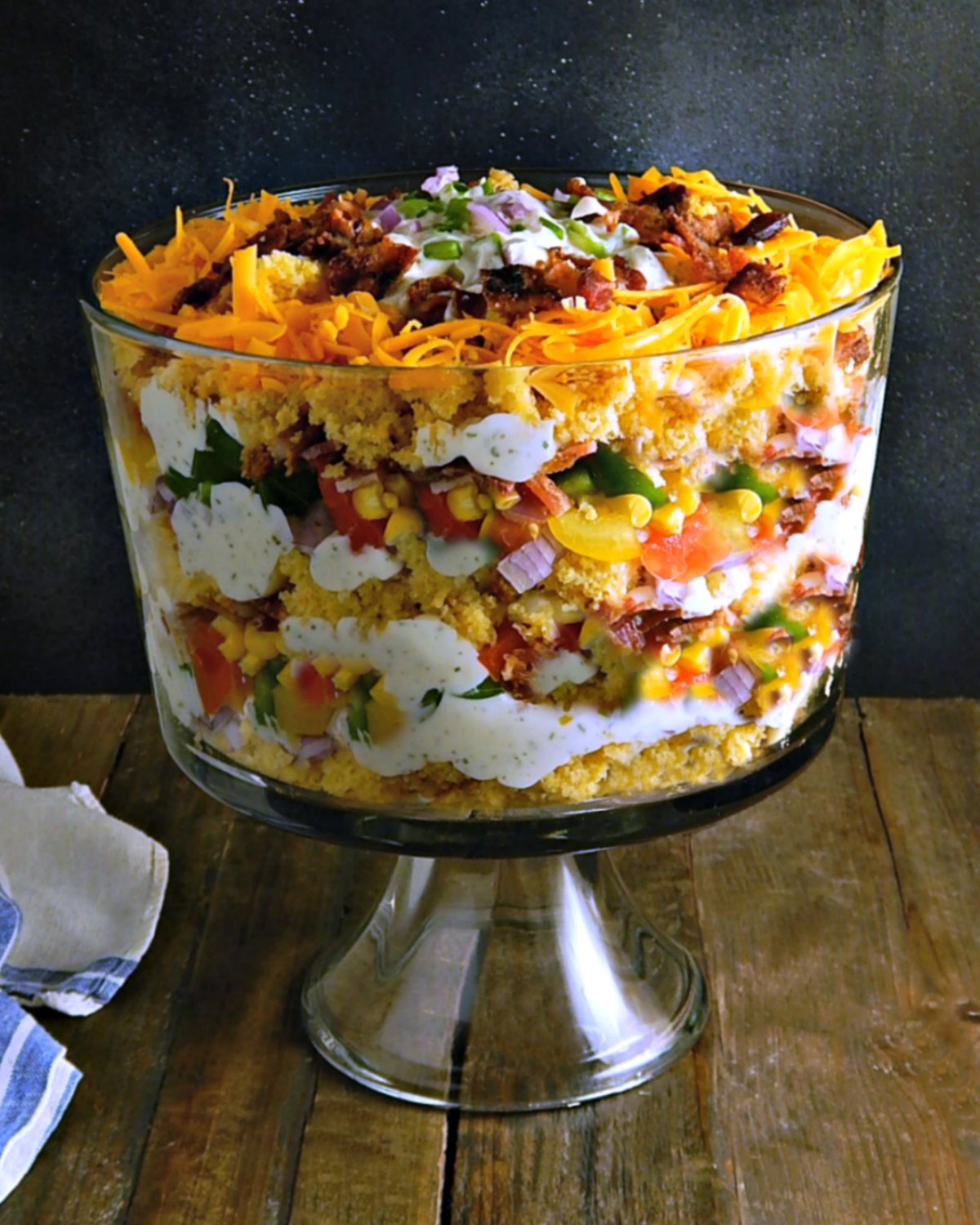 My sister told me about Cornbread Salad. I mean, really, if she hadn’t raved, I never would have made it. You gotta admit, Cornbread Salad sounds a little strange. I think she MADE me promise to make it and report back once I had! And once I did, I fell in love. Hard.

So if you haven’t ever heard of Cornbread Salad, you crumble up cornbread and then add just about every delicious, wonderful thing you can to it. And there’s no doubt the ingredients in cornbread salad don’t sound so much like they go together but it’s like a small miracle. The miracle of Cornbread Salad.

If you want to make Cornbread Salad “pretty” layer it in a trifle bowl, but in all seriousness, Cornbread Salad is at it’s best when all the ingredients are jumbled up and happy together and it sits for a while. See, I took the pic, then dumped it all in a bowl and mixed it together. Coz that’s how I’m eating it, although I know a lot of people like to serve cornbread salad at potlucks and special occasion dinners lookin’ all fancy in a trifle bowl

Of course it’s still good served “fancy” once it’s all mingled up, the cornbread is will absorb some of the dressing and meld with the other ingredients. Think of it as kind of like a Southern Panzanella Salad. Until it’s all mingled up, imho, it’s just not a real Cornbread Salad.

I’m giving you the recipe how my Sis told me to make it, but there are so many ways this Cornbread Salad can be riffed on. It can even take a decidedly Southwestern tack with Black Beans or Pinto Beans, and some Taco Seasoning, maybe black olives and green onion and/or salsa. Some people even put iceberg lettuce in this – can you imagine? In a salad, lol?

The one thing my Sister insisted on was that no matter what else you do, you HAVE to use a packet of dry Ranch seasoning (I like my Homemade Ranch Dressing Mix in this) rather than a bottle. It’s like the magic ingredient. She was right, too. By using the dry dressing you get a little more intense flavor without sacrificing the texture of the salad with bottled dressing, which will be a lot thinner than the mayo used in this.

I think this is best made with a Southern-style cornbread like my Southern Skillet Cornbread – it’s a little dryer and holds up better than a softer, moister, cake-type cornbread and hardly takes any time at all to make. As the ingredients mingle the dryer cornbread absorbs some of the dressing and it all becomes a kind of a cohesive mix but the cornbread stays distinct. If you use a moister cornbread, you can crumble it and set it aside overnight to dry a bit and if you use a mix, don’t go for anything fancy. Try something plain and old fashioned, maybe Jiffy.

Note: A Pinterest commenter thought this recipe has too much mayo. I asked if she used the drier Southern type of cornbread or the sweeter, softer cake-like Nothern type of cornbread. My thought was that the dryer Southern cornbread like I use may absorb more of the dressing, and maybe if she used the moister cornbread, it didn’t absorb as much, leaving the salad with more mayo than needed. I didn’t hear back from her though. I just mention it because it might help you use good judgment about the amount of mayo in your own cornbread salad.

I don’t make this salad often since it serves a crowd but as I made it for Thanksgiving 2019, I took careful note, especially, of the amount of mayo. I advise two to three cups in the recipe, and mine, using my Southern Skillet Cornbread needed every bit of the three cups of mayonnaise.  For the first time, we used a commercially made Ranch dressing mix and I really felt I could taste that “commercial” taste. From now on, for me, anyway, it’s my Homemade Ranch Dressing Mix.

I also found out there is such a thing as too much bacon! I made several things with bacon prior to Thanksgiving and had a little extra cooked up and tossed it in the salad along with the usual pound. Stick with a pound! I made a little alteration, too. This time I added 2 bell peppers, a green and a yellow but will stick with 2 green from now on (better contrast of colors) and three tomatoes and just a smidge more than the original 1 1/2 cup of corn. We all loved Cornbread Salad even more with more of those veggies.

While most of the ingredients for cornbread salad are inexpensive, a few can run on the pricey side.  I just about died when I was in a hurry one day and thought I’d pick up a premade pan of cornbread at the store bakery! I think it was $4.99! Don’t do that! And don’t buy a mix, either, if you want to save money. Cornbread is incredibly cheap to make.

I don’t eat a lot of bacon (although I managed to eat most of the bacon I reserved to garnish the top of the bowl, lol) so I look for it on sale, especially around holidays and toss it in the freezer. It takes up very little room. It’s usually around 1/2 price on a great sale. If you’re not brand loyal you’ll find more opportunities to save. Cheese, when it is at a low is a great item to stock up on; it keeps for weeks unopened in the fridge and can be frozen in a pinch, It won’t be great for a recipe like this because it will get crumbly but is fine for things like casseroles. Make sure to know the regular price, the regular sales price and the bottom low so you know when it’s a good time to buy.

Buy your condiments like mayo during the summer holiday sales when it drops to a low. Stock up for the year, and stock up on items like canned corn in the late summer. When the warehouses are full, the price is usually lower. Bell pepper and tomatoes are on sale sporadically throughout the summer. Since peppers keep well, I usually pick up some for the current week and a few extra to use the following. With tomatoes, I’ll pick up ripe ones for the current week if on sale and extra of any that aren’t quite ripe to put in the windowsill.

There are two ways this can be assembled: an easy mix in the bowl option or a more dramatic presentation as a layered trifle.

For both options, mix together the mayonnaise and the ranch dressing mix. Set aside.

To make easy option in a bowl:

After the Mayo and Ranch mixture are mixed together, simply crumble the cooled cornbread into a large bowl. Add the red onion (may reserve some for garnish), bell pepper, tomatoes, corn, crumbled bacon (may reserve some as garnish), and cheddar cheese. Toss ingredients together and mix in the Mayo/Ranch mixture. cover and refrigerate for several hours. To serve, garnish with reserved bacon, red and green onion, if desired.

To layer in a trifle bowl:

To layer, three full layers of ingredients are used, with 1/4 of the Mayo/Ranch dressing used to garnish the top, along with the cheese, the reserved bacon, the reserved red onion, and the green onion.

I’ll be bringing Classic Cornbread Salad to Fiesta Friday #198, hosted this week by two women of great taste; both well-seasoned bloggers: Judi @ cookingwithauntjuju.com and Liz @ Spades, Spatulas and Spoons. This is going to be a fun party with all kinds of Holiday foods!