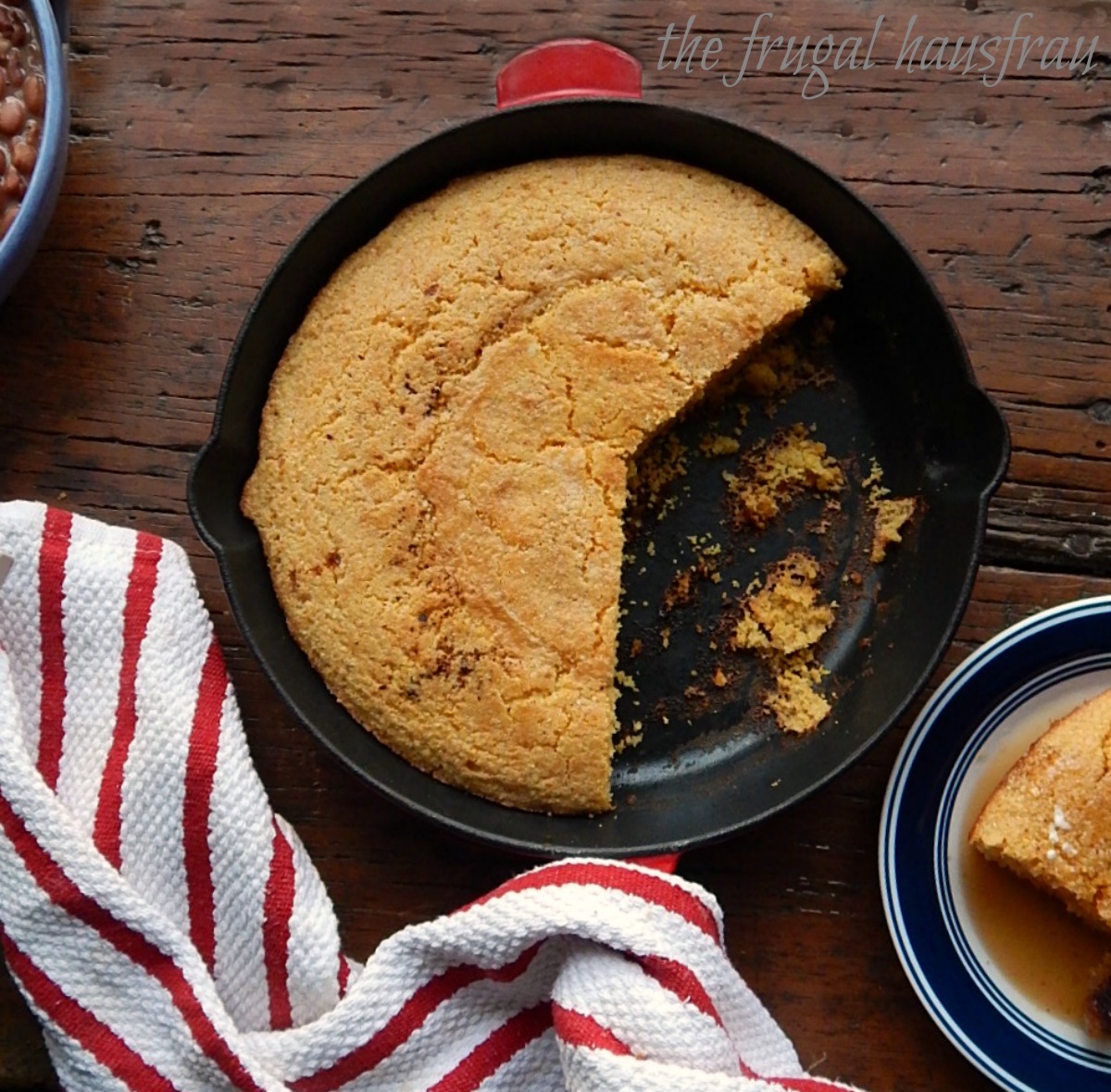 You know I posted a recipe just the other day for some very special cornbread, my Jalapeno Cheddar Cornbread. And declared (oh but I do declare a lot of things, just because this is my site, lol) that being a Northerner, I like my cornbread light & fluffy & moist. That being said, I actually grew up in Iowa and grew up on cornbread just like this Southern Skillet Cornbread.

So even though I might personally prefer cornbread that tastes like cake (and wonder who wouldn’t) there are times you need real deal Southern Cornbread. One that’s mostly cornmeal with just a touch of flour, that’s absolutely savory, real deal cornbread with crispy-crunchy edges from baking in a cast-iron skillet. That’s this cornbread.

You’re gonna need a real deal cornbread like this if you want to make Cornbread Salad, for instance. And gosh, if you haven’t had cornbread salad, you might want to remedy that. It’s can only by the loosest definition of the word salad even be termed as such. It’s like 10 things that don’t even sound like they’d go together that all meld into a glorious medley of flavors. And a good, old-fashioned cornbread is the only thing that’s going to stand up to that treatment.

And if you want to make cornbread for Cornbread Dressing/Stuffing, whether it’s your own treasured family recipe or maybe something like this bomb Chorizo & Cranberry Stuffing, you’re going to need a good sturdy cornbread; a lesser cornbread would dissolve into mush.

And ya know what else you can’t do with a light, fluffy, Northern style cornbread? For one, ya can’t crumble it into a plate of pintos or a bowl of Smoked Sausage & White Bean Soup, Not like you can with this Southern Skillet Cornbread. And being a Northerner, I don’t know if it’s the “right” or “correct” thing to drench cornbread in butter and syrup, but oh, is it good! Real butter, good syrup. Yum!

If you don’t have a cast-iron skillet, a pyrex casserole or pie plate will work, too. Just lightly oil it and do be careful anytime you use pyrex at a high temperature that it doesn’t get set directly on a counter or any surface that might “shock” it. Use a hot pad.

The recipe is standard, mix the wet, mix the dry and combine. Don’t overmix. And keep an eye on that skillet in the oven as it preheats with the drippings. If you go too long on that you’ll burn the drippings, not to mention smoke out your house, and have to clean the skillet and start over. Pouring the cornbread into the hot skillet is the key to giving the cornbread a good jump start on cooking and getting that crispiness.

As far as the most bang for your buck, this is THE time of the year (fall) to stock up on baking goods and specials. Anywhere from pre-Thanksgiving all the way to Christmas, there will be specials and plenty of coupons, if you use them on baking items.

See my list of Thanksgiving, Christmas and New Years Savings. There may be some minor sales around Valentine’s Day on baking items, but the next big sale will be Easter. You can take a look at what items to look for on sale around all the major holidays on this post, Win at the Grocer’s if you’re so inclined.

I always freeze any items containing flour for three days as soon as I bring it into the house; it’s a great way to avoid those little “peskies.” For the buttermilk, try adding two tablespoons of vinegar to your glass measuring cup and then topping it off with milk to the two cup mark; it’s far less expensive than buying it. Some freeze buttermilk in ice cube trays and then bag up the cubes once frozen. I’d suggest measuring it before pouring so you know about how many cubes of frozen buttermilk you’ll need for a recipe.

Add 2 tablespoons of drippings to a 10-inch cast-iron skillet or cake pan; rub it over the sides and bottom, and place in preheated oven to heat for five minutes.

In a medium-sized mixing bowl, add the cornmeal, flour, sugar, baking powder, baking soda, and salt and whisk together. Set aside.

In a smaller bowl, mix the eggs, buttermilk, and remaining 1/4 cup drippings; slightly heat the drippings if not pourable. Add the wet ingredients to the dry ingredients and stir to combine, just until the batter is moistened. Do not overmix.

Carefully remove the heated skillet from the oven and pour in the batter. Bake for approximately 20 minutes or until the cornbread is golden brown, and the center springs back when pressed. Cool on a baking rack and let stand 5 minutes. Remove the cornbread from the skillet and serve immediately.

Notes If you are making the cornbread to make cornbread dressing, let it cool completely and wrap tightly until ready to use, or freeze up to 30 days.