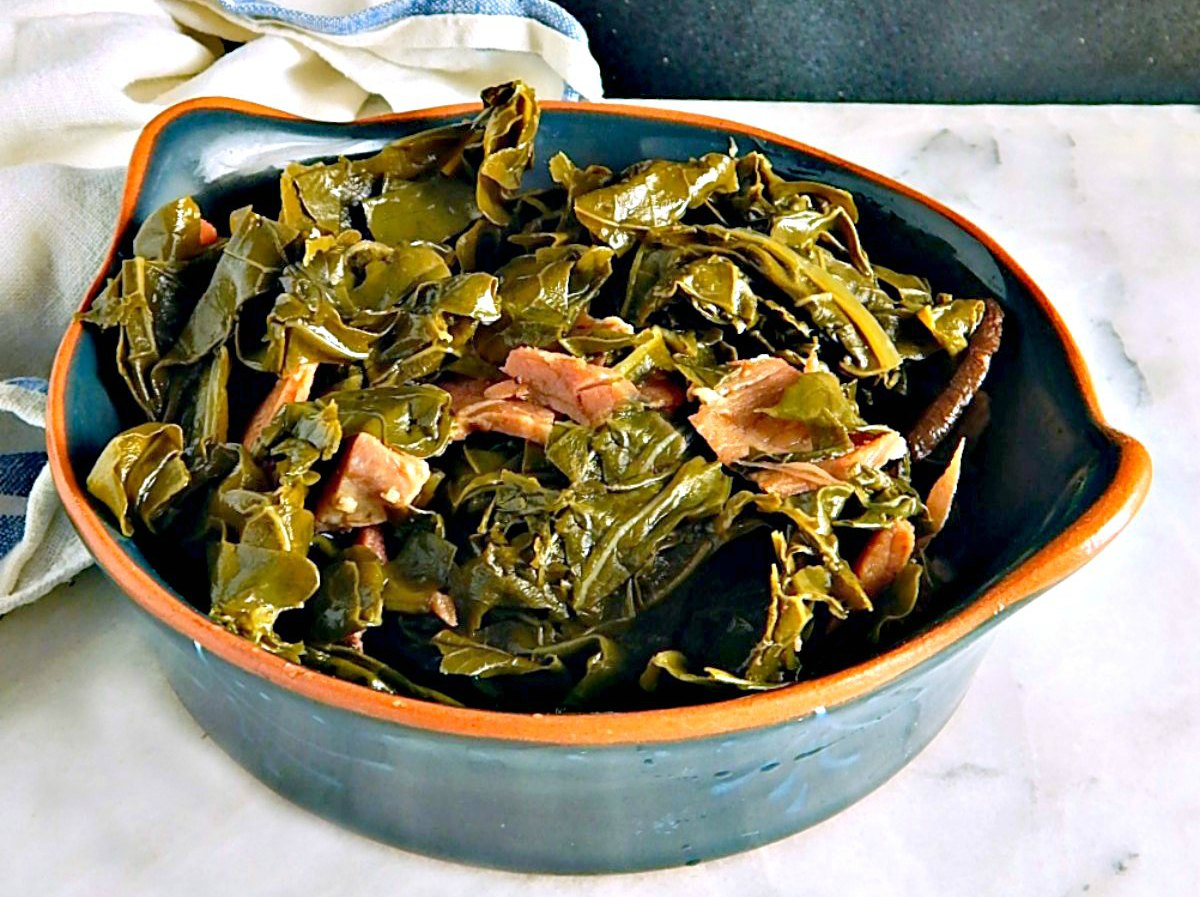 I love making greens of any kind in my Instant Pot, but the payoff in time is pretty great with these Classic Instant Pot Southern Collard Greens that usually take so much time and attention and love on the stovetop.

If you have an IP the days of long braising your greens to silky tenderness are long gone. Even when you make an old school recipe like this one!

I recently revamped my post for New Orleans Grillades & Grits. And of course, I couldn’t think of anything I wanted to toss on the side except some greens. I don’t know if they serve Grillades (which are kinda like a Cajun Swiss Steak) with greens down N’awlins way, and many would consider them a meal in themselves, but I can’t resist adding in a little extra veg! Now those greens are a little simpler but reminded me that I have yet to post these Southern-Style Greens we made earlier this winter.

I’m sure there are as many ways to make Southern Style Collards are there are Grandmas (and sometimes Grandpas) in the South. To me, there are two real defining factors that set them apart from the kind of greens I grew up with up Nord. Besides the fact that they’re Collards!

I’m guessing that way back when in really poor times, a lot of collards were cooked without anything meaty at all and ones that were, were probably Sunday best. These days there are a few things that can be added to collards, maybe a big smoked turkey leg, smoked ham hocks, neck bones, a small ham bone, (although that’s a little overkill) just to name a few. You can pretty much pick what suits your diet, price range and is available where you live.

There’s no doubt using something with a bone is going to give your collards some rich silkiness, but in a pinch, I’ve made these with bits and pieces of my leftover ham as shown here. Any rind pieces are especially good because they’ll carry some of the flavor of whatever glaze is on that ham and that keeps things interesting!

You’re going to want to wash any collards you get; these days most of those you buy from the store are going to be in pretty good shape but you never know what kind of grit or anything else can be hiding in those leaves. First, though, fold the collard in half alongside the stem and just yank it through your partially closed hand. It will usually separate easily from the stem.

I usually pile the stems neatly and then very thinly slice the tender parts, leaving only the hardest part of the stalk near the bottom and cook those slices as well. The rest of the stem goes in my green smoothies. It’s just a little extra step to avoid waste and get the most for my money.

Then stack them up, roll them into a log and make a slice or two the long way and then slice them across. I like to put them in my salad spinner or a big colander and really rinse them well (work in batches) under running water, tossing them around with my hand. Don’t soak anything in your sink. It’s just a bad idea; sinks harbor all kinds of nasties even when they look clean.

If you buy bagged greens that are already washed, it’s really important to wash them well under running water. Greens of all types that come bagged, whether salad greens or others have been responsible for numerous cases of outbreaks. The risk is minimized with cooking.

Making collards in the Instant Pot is pretty much a breeze. I like to cook these collards in a two-step process. I toss in whatever meaty bone I happen to be using with a cup and a half of broth (ham if you have it but chicken will do) or water and set the IP for 35 minutes. That gives the IP a chance to really break down the meat and the collagen and gives me time to prepare everything else. If you’re not using a bone, skip this step.

As soon as your meaty bone is done, quickly release the pressure. Make sure there’s still a good cup of liquid in the bottom, add some if needed, scrape up any residue at the bottom if there is any and toss in the wet greens in. Just shove them in the best you can, but try to make sure they aren’t going to be where the vent is. They’ll be over the fill line but that’s ok because they’re so loose and will wilt to a fraction of the volume.

Top with a little salt, a little vinegar, salt, and pepper, any spice you like (I add in a pinch or two of cayenne or a few red pepper flakes) close them up and cook for 25 minutes longer. When finished, pull the bone out, shred off any meat, chop up if necessary and add it back in. Serve with all that marvelous pot likker. For my fellow Northerners, that’s the juices on the bottom.

I’m sure Grandma never did this, but if the meat you are working with isn’t smoked and you love that smoky flavor, add in a few drops of liquid smoke. Yep, I can be sneaky like that. Check out my Top Secret Super Stealth Arsenal of Ingredients. And I can be a little full of myself, too, if you haven’t noticed from the name of that post, lol!!

Is there such a thing? I love to eat my leftover greens over grits or with cornbread; it’s fabulous. Leftovers freeze well, too. Just add to a Ziploc and label and date. Even the bone, which in this amount of cooking time will still have some goodness, can be saved and used in your next pot of stock.

Buying seasonally is really the way to go when buying Collard Greens, and that’s when I normally buy them. If you shop for greens, look around. You’ll probably find them in bunches, both organic and plain old collards and in bags. The bags will look like an incredible bargain. They’re huge but those cut up leaves take up a lot of room. The prepared bags, though, are almost always not a good deal when buying any leafy green.

You’ll notice that the bag is going to be priced by the ounce and those bags usually never contain 16 ounces (a pound) and the bunch of collards will be priced by either the pound or a bunch might not weigh a pound. I think that the pricing of the bags with odd amounts of ounces is a beautiful strategy that benefits the producer. Comparing bagged to fresh is a comparison most people can’t do in their heads.

Now you can’t buy the same amount in the bunch as you can in the bag but let’s say you know the bunch is a better bargain. But hey, there’s all that work to prep it. Is it worth it? You can geek out and figure it, and then you can be the judge.

The price difference between the bag $3.49 and the equivalent bunch $2.10 is 90 cents. Doesn’t sound like much does it? Divide the 90 cents by five to get your per minute “rate” of 18 cents per minute. Multiply it by 60 to get your hourly rate. If you were being paid to do this job by the hour, you’d be paid $10.68 an hour. It may or may not be worth it to you, but that’s the price of convenience.

These were collards were courtesy of my grocery store’s delivery people. Apparently they thought anything green was ok and that Collards were the same as kale and that a bag was the same as a bunch. There were a few other surprises, too, in that grocery delivery. They did extend me a $15.00 credit and free delivery next time. So that’s a lesson to learn when things aren’t right, let them know. Be polite, be direct, be firm.

I hope you like my Instant Pot Southern Collard Greens at your home as much as we do here! Thanks for visiting and sharing and happy cooking!

If using a ham hock, make several cuts, as deep as possible, through the meatyAdd ham hock(s) or turkey leg to Instant Pot along with the one 1 1/2 cups broth or water. Seal lid and set to High Pressure 35 minutes. When finished, quick release. Turn the meat over and scrape any residue on the bottom of the pot up with a spatula. Make sure there is still a good cup of liquid in the pot.

Add the greens, shoving them down; try to keep them away from the side with the vent; they may be over the fill line but will quickly shrink. Sprinkle with vinegar, sugar, salt, pepper, and cayenne or red pepper flakes. Reseal and set to High Pressure 25 minutes. When finished, quick release. Remove the bone and shred the meat, returning the meat to the pot. Stir, taste for seasoning and add more salt or pepper to taste. Serve.

If the meat is not smoked and you wish a smoky flavor, add a few drops (be careful it’s strong) to taste of liquid smoke.

If making with no bone and ham only (about 2/3rds a cup) skip the initial pressure cooking step. Add the ham to the greens with 1 cup of broth and proceed with the recipe.

I’ll be sharing at Fiesta Friday #316 hosted this week by Jhuls @ The Not So Creative Cook and at What’s for Dinner Sunday.