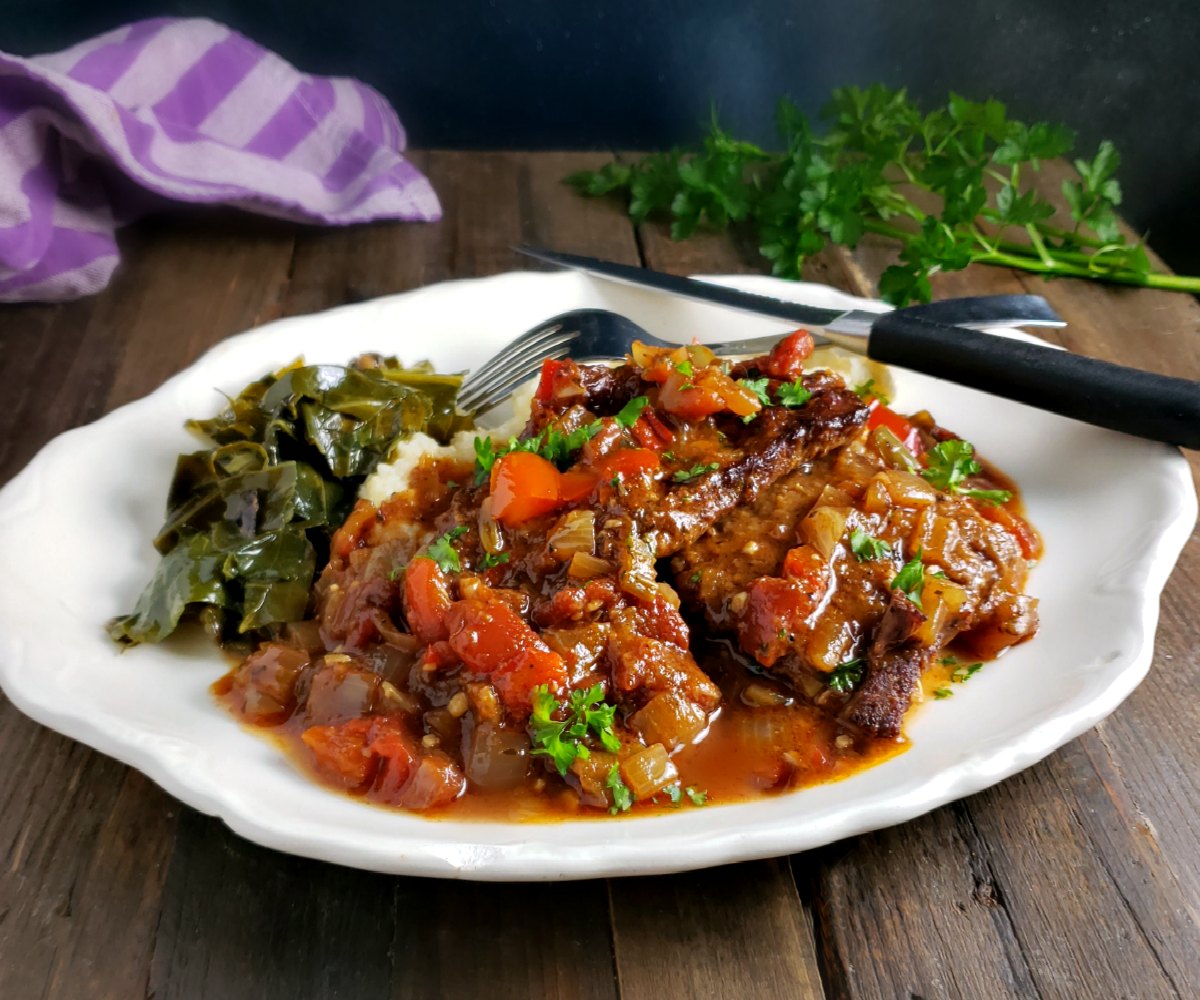 So often one thing leads to another, and so it was when I made Shrimp & Grits with a Cajun Gastrique not too long ago! My sister came to visit shortly after and while she missed the Shrimp and Grits, she proposed we make New Orleans Grillades & Grits. It was a good call and we were off on yet another New Orleans inspired adventure!

I have had Grillades on a visit to New Orleans. That’s been a few years, for sure, but if I remember right, they were a part of the marvelous buffet at The Court of Two Sisters. So doesn’t it seem a bit serendipitous (I love that word and never get to use it! Well, it IS kinda hard to work into a conversation!) that here we have two sisters trying to recreate that recipe.

About Grillades and Grits:

If you’ve never had Grillades and Grits, let me tell you about the Grillades part. The Grits are pretty self-explanatory, except to say that these are Cheesy Baked Grits. Because we’re ‘Mericans and put cheese in just about anything and everything. Baking Grits makes them so tender and creamy all the way through and knocks off a lot of the standing at the stove time.

But back to the Grillades. Grillades is the name of the classic New Orleans beef medallions, pounded, seared and braised in a luscious gravy. If you’ve never had Grillades, think along the lines of a Swiss steak. Grillades, though, are so much more highly flavored. Not too hot, just a little spicy and a little saucy, just like us girls when we get together. Or so we believe, lol!

We originally adapted an Emeril Lagasse recipe (update, I’ve changed it up quite a bit over the years, so my recipe reflects that.) Actually, I did the grocery store run and it was really my Sis who did all the cooking as I roamed in and out of the kitchen helping a bit here or there.

One time, as I wandered in, my Sis asked where the Creole Seasoning was, then mentioned the Grillades are even better with homemade. That’s when I reached into the cupboard and pulled out my homemade Emeril’s Essence. Bam!

Grillades and Grits isn’t a difficult meal to make, except the slicing and pounding of the meat. If your store has a butcher (make sure to know when their hours are) they’ll usually slice up any roast you’d like at no cost. I have a cheap little kitchen slicer at home that I use, although since we were at my folks near Sioux Falls, the butcher sliced the beef for this dish. (My slicer, though, was 30 bucks or so well spent! I use it for slicing lunch meat, cheese and sausages for buffet spreads and onions for French Onion Soup or Caramelized Onions, too.)

There’s not much to the actual making of the Grillades. Season, pound & brown the meat, set it aside, saute the fresh vegetables. Add in the tomatoes, liquid ingredients, a few herbs, and spices and simmer until spoon tender! It’s simple & simply outstanding.

If you make this with canned diced tomatoes, the tomatoes will most likely remain distinct. They’re treated with agents that make them firm. If you use whole tomatoes, crushed, they form a more traditional gravy. Stay away from crushed tomatoes for this recipe. If you choose not to use the wine in the recipe, don’t drain the tomatoes. The liquid in the tomatoes is about 1/2 cup so it will make up the volume from the wine. If not using wine, I like to add a teaspoon of red wine vinegar.

As for the seasoning, be aware that if you use a seasoning other than one like Emeril’s Essence, which has salt, you might want add more salt and reduce the seasoning to 1 tablespoon. If you’d like the thyme, oregano and basil may be replaced with 3/4 teaspoon of Italian seasoning.

Saving Money on Grillades and Grits:

You can generally find the cheaper roasts, like this top round, on sale for a song. If you have a freezer, it’s well worth stocking up around the Christmas holidays and just after. While everyone is buying the more expensive cuts of beef for celebrating, often the cheaper cuts quietly go on sale for some of the best pricing of the year.

The whole meal was excellent! I loved it, the folks loved and I recommend you make it as soon as possible – before summer is here, for sure! Thanks, Sis, and lez bon temps roulez.

Heat 1/4 cup of the oil in a large cast-iron pot over medium-high heat. When the oil is hot, add the meat, in batches and brown evenly on both sides, for 5 to 6 minutes. (Add additional oil if needed.) Set aside the browned beef.

Add the bay leaves, thyme, oregano, basil, stock, and wine. Return the browned meat to the pot and season with the remaining 1/2 teaspoon of salt, and 1/4 teaspoon of black pepper.

Bring the liquid to a simmer, cover partially, and reduce the heat to low. Cook for about 1 3/4 to 2 hours, stirring occasionally, or until the meat is very tender. Taste for seasoning and adjust as needed. Remove the bay leaves and stir in the chopped parsley. Garnish with some chopped green onions and serve immediately over grits.

I’ll be sharing at Throwback Thursday and Fiesta Friday #113, co-hosted this week by Sonal @ simplyvegetarian777 and Laurie @ ten.times.tea.