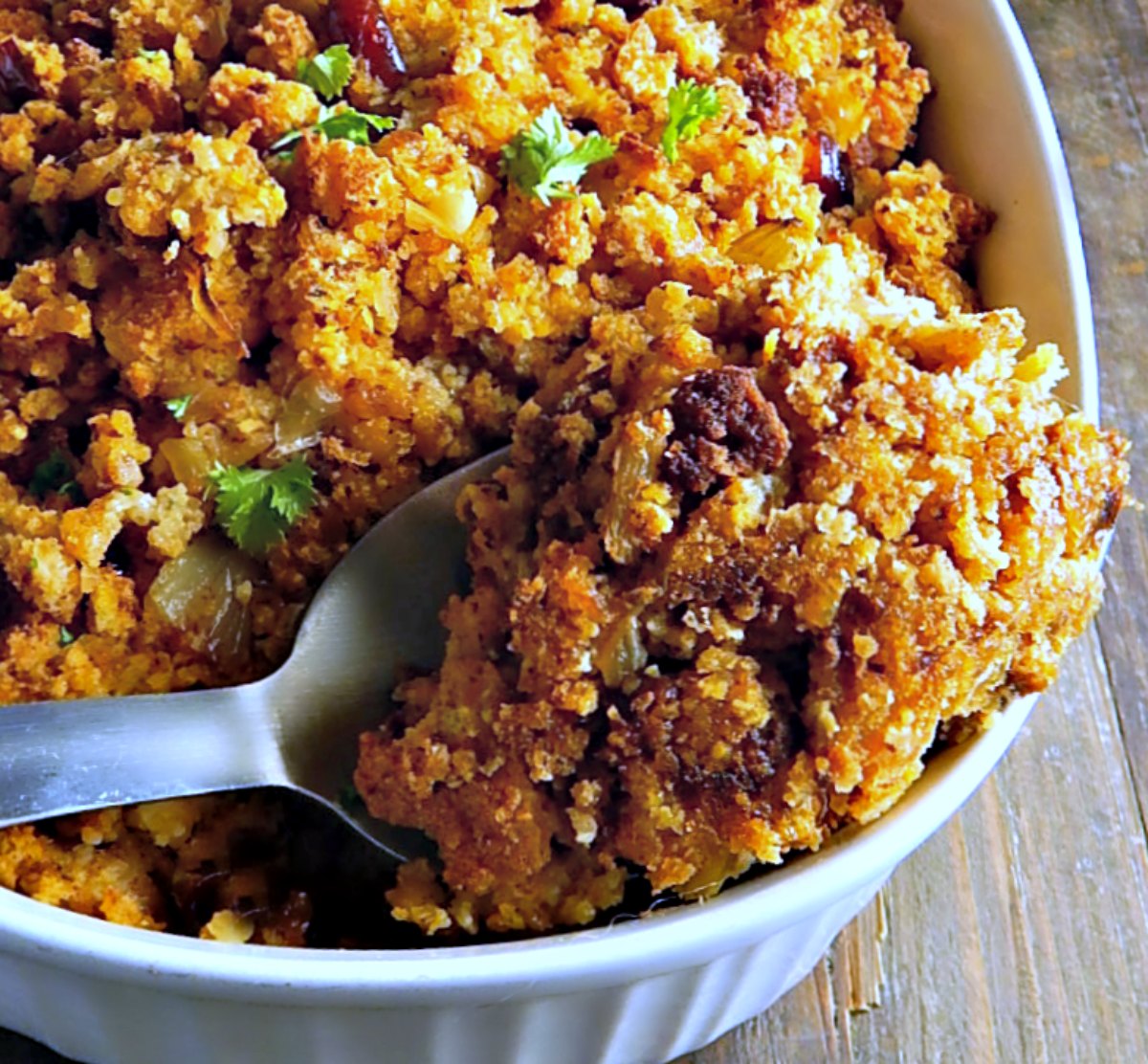 If there is anything I like to have exactly the same every single year, almost without exception, it’s my very traditional Classic Midwestern Stuffing. If you read that post, you’ll see I’m a little bit adamant about it. But then a couple of years ago, my sister talked me into doing her Ridiculously Delish Bacon Stuffing, and now, here I am posting out this recipe for a Chorizo & Cranberry Cornbread Stuffing.

Has the world come to an end? Not yet, but I discovered somewhere along the line, that I can make two stuffings, lol!! Why that never occurred to me before, I have no idea. I also don’t mind doing that because we just love stuffing. And if once made and before it’s baked, it seems like to much, part of it can also be frozen. Just imagine, a little stuffing in your freezer ready to use at your whim throughout the year…maybe for stuffed chicken or pork chops or just as a side.

I’ve been a bit slow about posting out celebratory dishes for Thanksgiving this year. My shoulder, which is healing nicely is slowing me down. It seems I’ve been “guarding” it for so long that there’s a lot of deterioration in my muscles and boy does it let me know when I’ve gone too far! Raise your hand (but not over your head, if you’re like me) if you hate physical therapy with a passion!!

But I’m trying to remain positive, and I hope you’ll love this stuffing/dressing as much as we did! I was going to take more pics, but it kind of got inhaled here at our house. I cooked it as a side, but somehow it became breakfast, lunch, and dinner – and yes, we thought it was that good! It’s kind of glorious with all the spicy chorizo, which I thought was just right, just barely spicy, although my son, the one who puts hot sauce on everything, thought it should have a LOT more chorizo. The sweet-tart dried cranberries played off that bit of spice so beautifully and added just a bit of chew. And they’re soaked in a vinegar mixture (an idea I stole from Bon Appetit) and you’d never know it’s in there, but it makes everything amazing. Strange, I know, but you’ll have to trust me on that one.

This dressing is a cornbread based one, but it took me a while (being a Northerner, I suppose accounts for that) to crack the code on cornbread dressing – the cornbread needs to be really dry and then just nicely moistened for the most beautiful texture, holding together without being a wet mass, all golden and crispy, crusty on top and moist throughout. I do think it’s best if the stock/broth mixture isn’t added too far ahead of baking. That goes right in line with the recommendation that stuffing or dressing never be prepared the day ahead. This really is a helpful site as far as stuffing with all kinds of info about stuffing; timing, amounts, and an amazing amount of information. They go on and on. Stuffing and Food Safety.

Like most dressings, all the standard procedures apply. The cornbread should be dry throughout and is left overnight and then baked off, just to finish drying. That can all be done ahead. And actually, most of the prep can be done ahead. You can cut up the veggies, saute them if you want, prepare the cranberries, and so on, and you can even put everything together if you want – except for the egg and the stock, all ahead.

Ovens can be a bit variable, and this stuffing cooks fast, but if you’re cooking your turkey at a lower temp, which many of us do, toss the stuffing in for about 10 minutes before the turkey comes out to give it a head start, then after you remove the turkey, crank the temp up to 350 degrees. That should get you to the ballpark in timing. If you rest your turkey for 30 minutes, the stuffing should be done and it can have it’s 10-minute rest as the turkey is carved. I love a crispy, crusty top to the stuffing so this cooking method is nice. The stuffing stays moist as it’s cooked covered for part of the time, then it’s uncovered, dotted with butter, and the heat is cranked even higher, to 450 degrees F. so the top will brown nicely.

If you’d like to make your own chorizo; maybe you can’t buy it where you are or it’s too pricey (it’s so inexpensive to make, especially if you have dried chilis on hand) check out my recipe for Homemade Chorizo. Of all the cornbreads on my site, if you’re making yours homemade and need a recipe, I’d use this Southern Skillet Cornbread, which doesn’t have to be made in a cast-iron pan. I don’t know if you’ll need one or two batches. And of course, I have a recipe for Chicken or Turkey Stock, but usually, I just buy mine and make it after the holiday with the Turkey Carcass. There’s a limit, right, to what we can do! Speaking of after the holiday, I gotta throw down my 12 Days of Turkey, which has morphed over the years to around 40 recipes to make with your leftover turkey!

Is it Stuffing or is it Dressing:

I’m skipping my money-saving tips (It’s Thanksgiving, so hopefully you’ve bought everything on sale) in favor of this rant! Before I start in, I’d like to wish you all a Happy Thanksgiving if you celebrate, but I’d like to clear something up before it comes up at your celebratory table. I’ve been watching a lot of tv as I’ve been recovering from my shoulder surgery (I have been SO bored!) and have been seeing cooks/chefs explaining the difference between Stuffing and Dressing. Even Alton Brown back in 2014, messed up. Oh, woe, the oft-repeated lie.

I’ve heard in the South, they say dressing and in the North, stuffing. That’s some kind of nonsense. In the Midwest, we use stuffing and dressing interchangeably and I’ve heard the same with my very own ears in the South.

Some say if it is baked in the bird, it’s stuffing, but you can bake stuffing in or out. It’s often the same family recipes with the same name that in the past were baked inside the bird (unless there was extra that had to be put in a pan) and it was the more recent warnings about possible food poisoning that spurred people to bake in a pan instead. (Now it seems we’re coming around; if handled properly, the turkey can be safely stuffed.)

Just yesterday on Food Network, I heard three times that stuffing/dressing, baked out of the bird, is called dressing. The term “dressing” comes from preparing game or poultry. There’s field dressing, removing the unsavory parts, and there’s dressing as preparation for cooking. When dressing for cooking, it can involve stuffing mixtures into those very same cavities. Dressing is a term that survives to this day as more of a noun (to describe the mixture stuffed in the critter) than a verb (to describe the act of stuffing). And yes, these days, instead of the dressing being stuffed in the bird, the dressing can be baked outside the bird, too.

I read recently that the term dressing became popular in Victorian times; seemingly it wasn’t considered “proper” to say stuffing, which might conjure distasteful imagery. I wonder about that. It seems “dressing” is evocative as well; after all, you can’t dress if you’re not in a state of undress, something that was not proper to think about during those repressive times. Oh, the sheer horror of it all! Regardless, this explanation shows that back then, both dressing and stuffing were the same thing: A mixture stuffed in the bird or other game.

So there you go, both stuffing and dressing are traditionally stuffed inside the Thanksgiving turkey. It is no more correct to call that same mixture, when baked in a pan, dressing instead of stuffing. Unless you are a person from the Victorian era, and you would now be 118 years old at the youngest, and in which case, I say you’ve earned the right to call it stuffing by now!

So if you have to suffer at the Thanksgiving table as some know it all waxes forth (and probably incorrectly) about the difference between stuffing and dressing (which makes me a know it all, too, darn it all, but then I already suspected that might be the case, lol!) now you have a few facts at your disposal. Of course, you never have to correct uncle so and so or your cousin whoozit, but sometimes, just sometimes, it might be fun. In the interest of peace at the table, though, you might just want to “stuff a sock in it“…or should that be “dress a sock in it?”

Preheat oven to 350 degrees F. Butter a shallow two-quart baking dish and a sheet of foil if casserole does not have a tight-fitting lid. If cooking other items, toast the cornbread ahead of time.

In a microwave-safe container, at least one cup in volume, heat vinegar and three tablespoons water to a boil in the microwave, about 1 minute. Add the cranberries and let sit until plump, about 15 minutes. Drain and reserve both cranberries and liquid.

Meanwhile, if not packaged and already dry throughout, spread cornbread on a rimmed baking sheet and toast until golden brown, 10–15 minutes, stirring every few minutes Let cool. Place in a very large bowl. Add the soaked cherries, but at this point do not mix, and do not mix in any of the added items until instructed.

In a large skillet, add the oil and heat over medium-high heat. Add the chorizo and cook, stirring occasionally and breaking into small pieces with a wire type potato masher or spoon, until browned and cooked through five to six minutes. If chorizo starts to stick, add a little water and cook until water burns off. Transfer chorizo to the bowl with the cornbread, using a slotted spoon and leaving any drippings behind.

Reduce heat to medium and add reserved cherry soaking liquid to skillet, scraping up any browned bits, until almost all evaporated about 30 seconds. Add 1/4 cup butter (the butter not in pieces) and melt, scraping skillet if needed. Drizzle over the cornbread in the bowl.

Whisk egg and 2 cups stock in a medium bowl; pour over cornbread mixture. Gently toss, adding more stock by the quarter cupful as needed (you may not use it all), until combined and cornbread is moist. Mix carefully to avoid breaking cornbread into crumbs. Transfer to prepared dish.

Cover with buttered foil or casserole lid; bake until a paring knife inserted into the center comes out hot, 15 to 20 minutes. Increase oven temperature to 450°. Uncover, dot with the butter pieces and bake until top is golden brown and crisp another 10 to 20 minutes. Let sit 10 minutes before serving.

Note: if oven temperature is lower, cook for a bit longer. Most turkeys should rest for about 30 minutes, so this recipe is ideal to toss in around 10 minutes before the turkey is done; then after the turkey is removed, turn the heat up to 350 degrees F. and continue to bake as directed