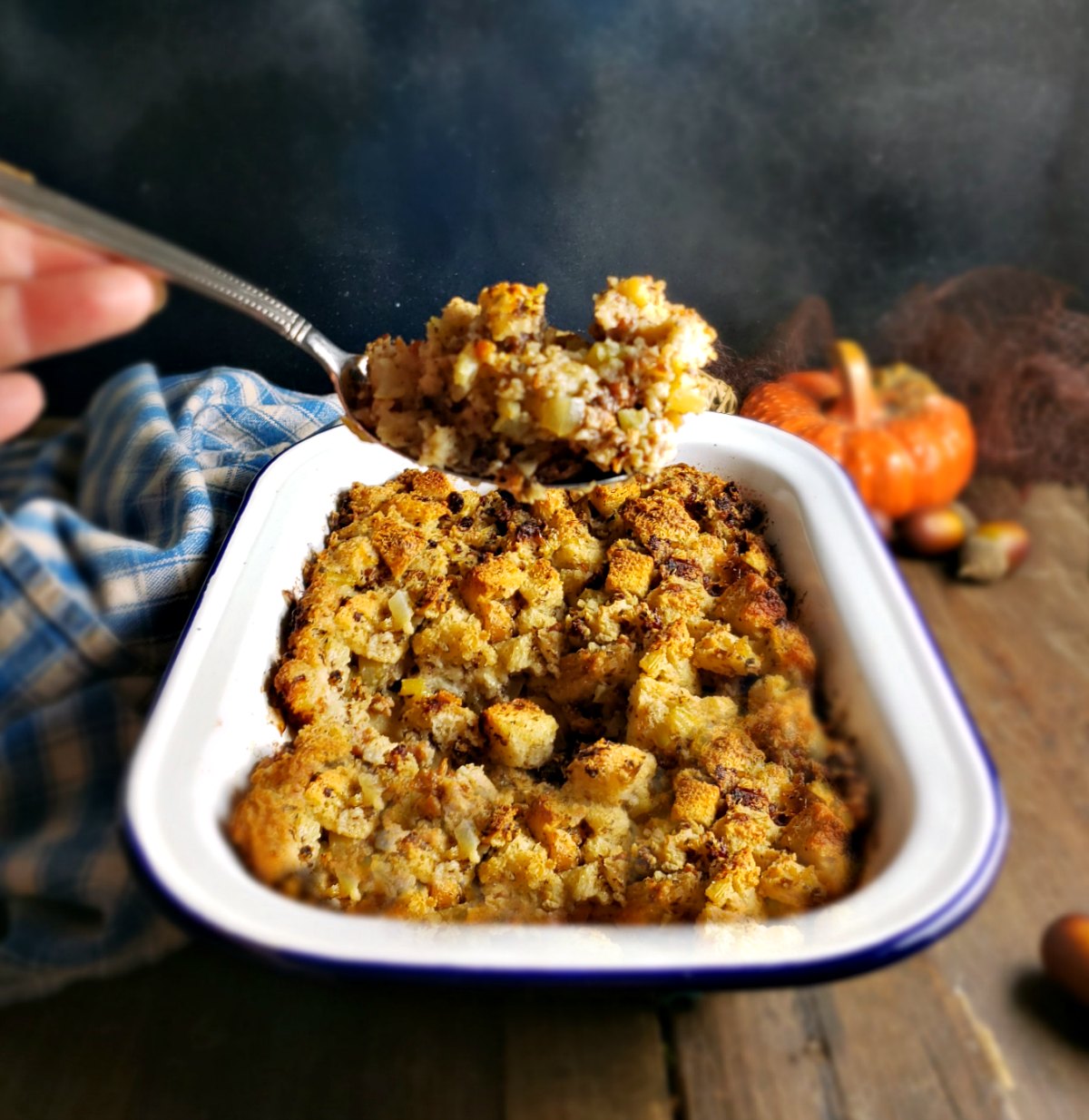 Thanksgiving food, here in the US, isn’t really about the turkey – it’s about the sides. To me, it’s not Thanksgiving without mashed potatoes, gravy and of course, stuffing! Notice the explanation point. I get excited about stuffing, especially since I usually only have it once a year. Anything else can be as gourmet or as basic as you’d like, but the stuffing? It has to be this one. This is Classic Midwestern Stuffing or Dressing,

My Mom made a good stuffing, but she was prone to experimentation, so when I was talking to my friends, Fred & Betty, and said I didn’t have a “set” recipe for stuffing, and I how I missed the really classic stuffing I had back in the day (before that ill-fated experimentation phase of Mom’s) they offered up their recipe. It is THE one. And it’s everything you can imagine a really good, classic stuffing should be.

About Classic Midwestern Stuffing or Dressing:

Fred & Betty’s recipe for Classic Midwestern Stuffing or Dressing is from Betty’s Mom, who was in her 90’s when the recipe was handed off to me. If you think stuffing is an afterthought, something plopped down on the plate only as a nod to tradition, you haven’t had stuffing like this. And by the way, whether pulled from the bird or from a casserole, in the Midwest, we call it stuffing or dressing, but the old people, like me seem to prefer the word stuffing.

And in the Midwest, we tend to be particular about our stuffing ingredients! So keep your oysters (we’re Midwestern), cornbread (we’re Northerners) and most fruit, dried or fresh (unless it was something Grandma would use.) In the Midwest, we don’t need no stinking* water chestnuts (not local) or wild rice (different dish.) We don’t want cheese (sacrilege) or leeks (la di da). We really don’t want greens (trust me, nothing will make this healthy) or mushrooms and/or anything else “fancy” or “trendy.”

And bacon? No bacon! I’m taking a stand here – just like cheese, bacon shouldn’t be in everything, and really shouldn’t be in a classic stuffing. You heard it here first, fellow Americans! Sausage goes in stuffing. And giblets. Ask your Grandma.

Update: my sister, when she read this took umbrage (yeah, that word shows my age) and it seems, unbeknownst to me, she makes a Bacon Stuffing!! And it has water chestnuts and mushrooms, lol! And so not too long ago, I made her recipe. It’s My Sister’s Ridiculously Delish Bacon Stuffing. And I had to eat my words and a lot of her stuffing. It’s excellent. But my heart still wants this Classic Stuffing.

So I mentioned all the things that we don’t use in this old fashioned stuffing, so let’s talk about the rest of the ingredients here. There are ways to shortcut stuffing, and believe me, I’ve done them all. But the common deviations, below, do make a difference. Especially the broth or stock. That being said, this classic stuffing is so good that shortcuts or not, you’re going to love it!

For the best stuffing skip the bagged or boxed already dried bread. Hey, ya gotta do what ya gotta do, but while this shortcut may make a tasty stuffing (since you’re adding your own herbs in this recipe, if you do buy the cubes of dried bread, try to find one that’s not already flavored) it will never make a great one. Stuffing isn’t just about taste, it’s about texture. Look for a mix of good, sturdy bread and try to find ones without a lot of additives and softeners which can inhibit the drying process.

There’s not a lot of broth/stock in this stuffing, but if you have a home-made stock it brings true flavor & body to the stuffing. If you can possibly swing it, go with home-made – whether chicken or turkey. You’ll be able to control the salt and avoid that boxed flavor. Make it a few weeks ahead and freeze, which works especially well if you want to make other items ahead that use stock. Things like make-ahead gravy. Having stock on hand helps to cut down on the last minute Holiday cooking crazies.

The butter? It’s not a typo, this outrageous amount, about a tablespoon per serving, but this is a huge amount of stuffing. And here’s where you want to use real butter, not margarine. You’ll thank me! Maybe your arteries won’t but you’ll be in bliss and it’s only one day, once a year. If you’re worried, do what you must. And giblets? That’s your call. I usually skip them (don’t tell my Mom!)

Best Turkey Broth or Chicken Broth – it makes such a difference!

Whenever a feast day like Thanksgiving or Christmas rolls around, I pick up items I know I’ll need as I see them on sale rather than doing one huge “shop.” The bread can be picked up and dried and bagged until you need it. Sausage can be bought whenever it’s on sale and chucked in the freezer.

And of course, over the pre-holiday sales, you’re going to find all these ingredients at a low at one store or another. Do yourself (and your budget) a favor and shop selectively and stock up on all the seasonal ingredients (and by that I mean Thanksgiving or Christmas season) that you’ll use throughout the next few months until the next great holiday sales hits around Easter. Check out my post on Thanksgiving, Christmas & New Year’s Sales for items to look for.

Baking: The stuffing will be baked at 350 degrees for about 45 to 55 minutes. Adjustments will need to be made if cooking at a different temperature or if using different-sized pans (for instance, two smaller pans. instead of 1 large)

Bread Cubes: Several days ahead (three to four) cut bread into about 1 inch by 1/2 inch cubes. Place on large sheet trays in a safe place to dry. May also be spread out on trays and baked in a 300-degree F. oven for 30 to 50 minutes, stirring and rotating trays now and then. Cool before using.

Premade Bread Cubes: (14 to 16 ounces) may be used but stock/broth may need to be increased.

Broth: Chicken or turkey stock may be used, home-made is best. Optional: If time allows, simmer the broth with the turkey giblets (but not the liver) and neck for 30 minutes. Finely chop giblets and add to stuffing, discarding any bones from the neck. If not used for this recipe neck (but not giblets) may be saved for stock made with the turkey carcass.

In a large skillet, cook sausage over medium heat; remove from pan and set aside. Add butter and when melted, add celery and onions. When softened and translucent, cool slightly. In a very large bowl, toss bread cubes with poultry seasoning, sage, salt & pepper. Add the reserved sausage and celery/onion/butter mixture and toss everything together with clean hands.

Americans have long laughed at the Mel Brook’s parody Blazing Saddles and the line “We don’t need no stinking badges.” Brooks misquoted this from the questionable classic, The Treasure of Sierra Madre and the quote has appeared in many movies, books, and stories over the years.

So for my more far-flung friends, if you ever hear an American say, “We don’t need no stinkin’ something or other” they’re not suffering from a lack of language skills, they’re trying to be funny! 🙂