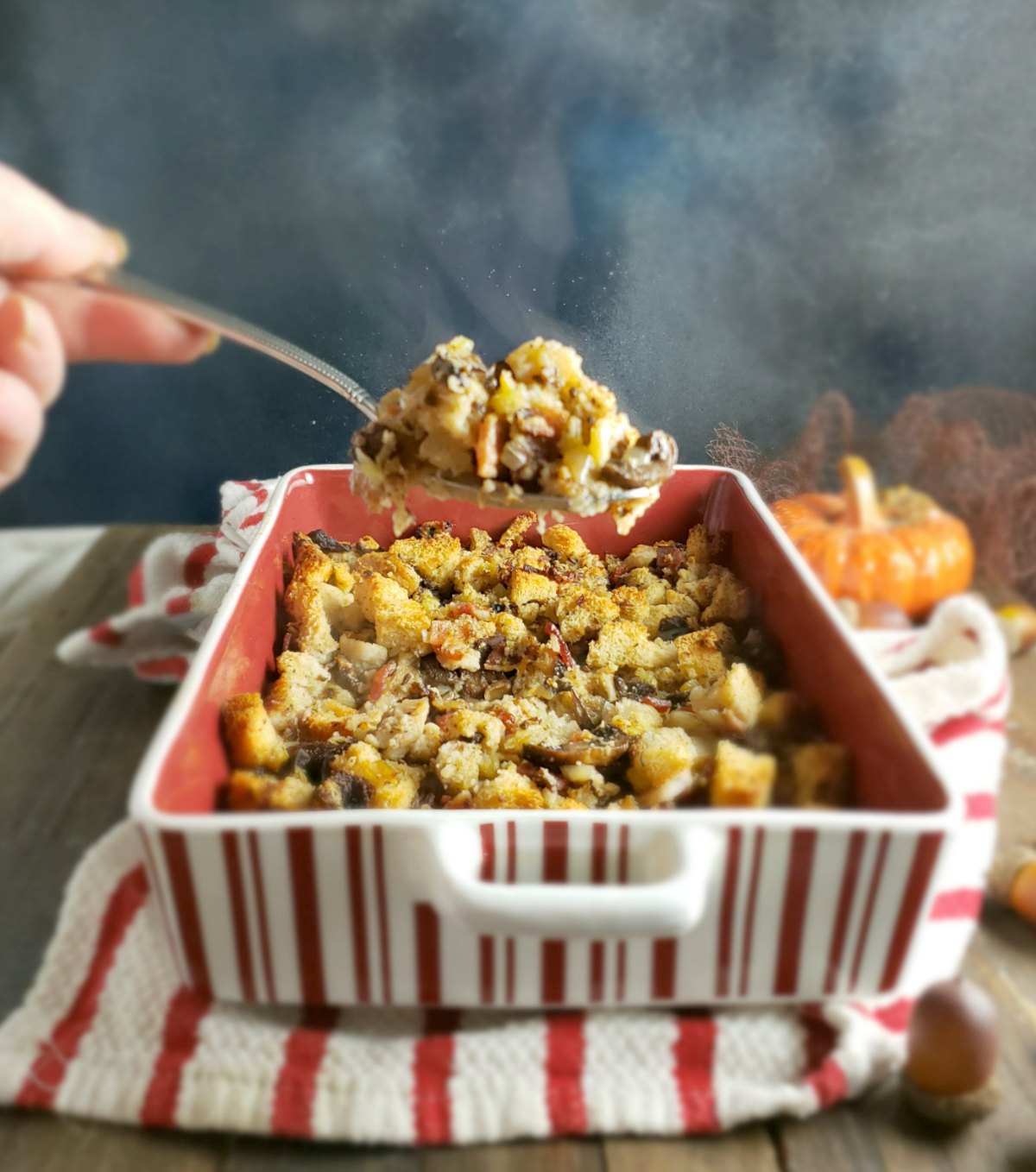 Have you ever wished there could be a Turkey Stuffing permeated with the rich flavor and smokiness of bacon? One that’s fantastic in the bird & in a casserole? A seriously crave-worthy stuffing? My Sister’s Ridiculously Delish Thanksgiving Bacon Stuffing is the answer. Now, what was that question, again! You’ll be forgetting everything except for this stuffing once you start eating it!

Ah, my sister’s Bacon Stuffing. This year it seems my baby Sis all but declared war on me over a post for my Classic Midwestern Stuffing. She took particular umbrage – yes I said umbrage, how OLD am I? – over this declaration of mine:

“And bacon? No bacon! I’m taking a stand here – just like cheese, bacon shouldn’t be in everything, and really shouldn’t be in a classic stuffing. You heard it here, first, fellow Americans! Sausage goes in stuffing. And giblets. Ask your Grandma.”

So just to keep peace in the family, this year we broke tradition and for the first time in years, maybe decades, we made My Sister’s Ridiculously Delish Thanksgiving Bacon Stuffing instead of our Classic Midwestern Stuffing.

My son was cooking up all the bacon (isn’t it great he was helping this year!) when it dawned on him we weren’t making “our” stuffing and wasn’t happy. He managed to pull it together and decided anything with all that bacon had to be good! It helped that we knew this was Auntie Liz’s recipe and she’s a fabulous cook. Still, it was a bit like a trust fall, lol!

And fall we did – in love with this stuffing. Was it as good as mine? Yeah, my sis actually called to find out! Don’t you just love sisters? I put her on speaker and my son called it: “It’s just as good as Mom’s. They’re pretty much equal but different.” Hey, I’ll take that. I think. And I’ll take another helping of my sister’s stuffing. It IS seriously amazing!

Even though the recipe calls for frying up the bacon in a large pan, whenever I need more than a piece or two of bacon, I make my Buffet Style Oven Baked Bacon. Line your pan with foil for easy cleanup and make sure to save some of the drippings to saute the veggies with.

Make it easy on yourself; as long as you’re cooking the bacon, make a little extra so you can whip up some quick BLT’s for a light lunch or to have on hand if you’re going to be making any sandwiches (turkey clubs maybe, or maybe these Hot Broiled Sandwiches or Light Hot Browns) with your turkey leftovers. That is if you’re the type that has the willpower to set a little bacon aside.

If possible, make this stuffing ahead preferably the night before (there are no eggs so it’s safe) and before you pop it in the oven (or your bird and oven if you go that route) adjust the amount of moisture so it’s just right. It’s always a bit of a judgment call as to exactly how much broth to use. If too little, the stuffing can always be moistened with a bit more broth and popped back in the oven. If too wet, turn your stuffing out and pop it back in the pan, bottom side up, then cook for another 20 minutes or so.

My family isn’t very large and though we love leftovers, we have a limit. It was a happy day when I discovered I could stash stuffing, uncooked in the freezer in a Ziploc bag. Then we can easily have stuffing with dinner later anytime we want to fill out a meal. For Thanksgiving this year, 2019, we went rogue and made a pork loin, pictured above, stuffed with this stuffing and served the rest of the stuffing as a side. It was fabulous! That recipe is coming soon.

Whenever a feast day like Thanksgiving or Christmas rolls around, I pick up items I know I’ll need as I see them on sale. The bread can be picked up and dried and bagged until you need it. Bacon can be bought whenever it’s on sale and chucked in the freezer. for example.

And of course, over the pre-holiday sales, you’re going to find all these ingredients at a low at one store or another. Do yourself (and your budget) a favor and shop selectively and stock up on all the seasonal ingredients (and by that I mean Thanksgiving or Christmas season) that you’ll use throughout the next few months until the next great holiday sales hit around Easter. Check out my post on Thanksgiving, Christmas & New Year’s Sales for items to look for.

In a large pan, fry bacon until crisp, remove and reserve. Discard all but 2 to 3 tablespoons of drippings. Add butter and stir till melted. Add celery and onion and cook until softened, six to eight minutes. Add mushrooms & garlic and continue to cook for a few more minutes.

Remove from heat and add in the Brownberry Herb Seasoned Stuffing, the reserved bacon and water chestnuts, if using. Toss together and add chicken broth to moisten. Taste for seasoning & add in salt, pepper and additional desired herbs.

This is best left overnight in the refrigerator before baking. Check for the desired amount of moistness and add additional broth, if needed, before baking. Stuffing should be not be wet. See note, below, if stuffing a bird.

Bake in a buttered casserole, covered, at 325 to 350 degrees for about an hour, uncover and continue to bake until top is a little crispy and crunchy, an additional 15 minutes or so.

Today I’ll be sharing My Sister’s Ridiculously Delish Thanksgiving Bacon Stuffing at our very own Throwback Thursday Link Party. You might want to bookmark this special two-week extravaganza – they’re all lots of links to both Thanksgiving & Thanksgiving leftovers, Thanksgiving Crafts & Holiday Decorating.