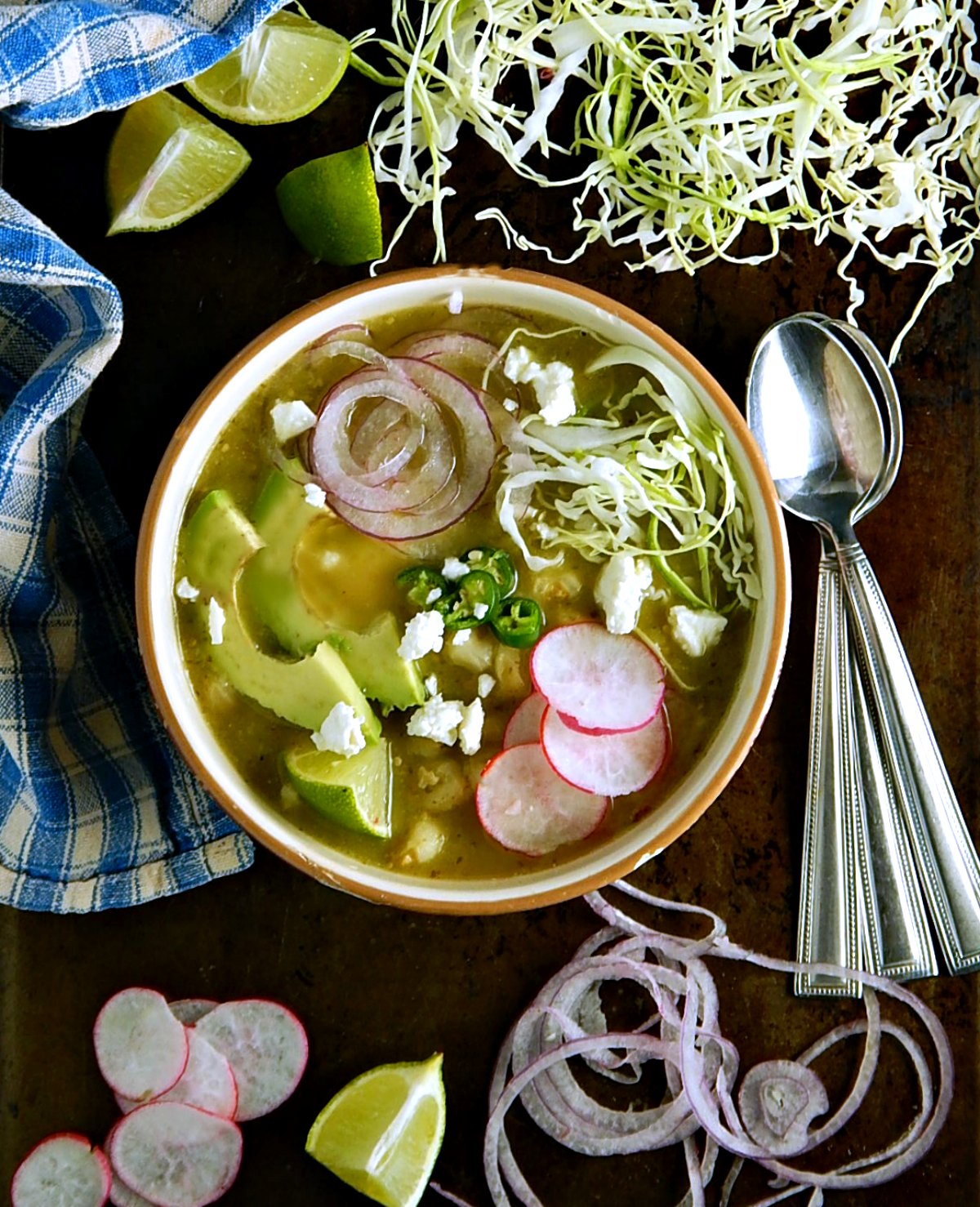 I don’t know when the thought popped in my mind to refashion my turkey leftovers into Pozole, but I’m glad it did. And this is not just any old Pozole but a Green (Verde) Pozole with Turkey. Pozole Verde de Pavo.

Yeah, while the soup portion of this Pozole is wonderful, just chock full of everything good (it’s made with a Verde or green sauce, full of tomatillos, serrano or jalapeno and cilantro), and chewy hominy, just like my Vietnamese Pho, the fun is in the garnishes.

Cilantro, lime, thinly sliced radishes, cabbage, and onion are the usual suspects, placed on a platter so everyone can garnish to their heart’s content. You might want to add some corn tortillas or chips, and maybe thinly sliced serrano or jalapeno for the heat lovers, and no, it’s not traditional, but a sprinkle of crumbled queso fresco can never be wrong, imho.

What really makes pozole a pozole, as opposed to just a turkey soup is the Hominy; the hominy in pozole is puffy, soft, chewy corn. It’s corn that has been dried, treated with lye and then thoroughly washed so it’s safe to eat. Ground up, it’s what corn tortillas are made from, which is part of the reason that pozole tastes like enchiladas.

While hominy can be cooked just like dried beans, most people just pick it up in canned. And that hominy combined with the ingredients that make the green (or Verde) sauce along with the turkey and stock is truly like eating enchiladas in a bowl.

Pozole is best when made with a wonderful stock, and the stock from a Thanksgiving turkey is just the thing. I simmer up a huge pot (recipe here) with my Thanksgiving turkey carcass, and use about half of the rich broth (7 cups) for this recipe and save half of the stock for something else. (By the way, this recipe is great with chicken, too and if you don’t have turkey stock, just use chicken stock.)

Next, you’ll want to make the green sauce by cooking up and blending wonderfully acidic tomatillos, onion, garlic, cilantro, and peppers. You’ll make it as hot or as mild as you’d like. That green or Verde sauce is then cooked in a bit of oil (or if you’ve made your own stock, a little of the fat that rises to the top) just until it loses it’s bright green color.

I love almost any Verde sauce and this sauce is so good I usually double it & half goes in the pozole and half is saved for enchiladas another day. It’ll be fine in the fridge for a few days or can be frozen until you’re ready for it.

Then add in your stock, a few herbs and a can or two of hominy & simmer away for a few minutes, about 20 or so, to blend the flavors. Toss in your leftover turkey to warm through, set out your garnishes and dinner is on the table. Quick, easy, outstanding – and healthy. The perfect meal for after holiday indulgences.

When made with leftover turkey, especially when that turkey was bought on sale for a holiday, and especially when the broth is made with the carcass from that sales priced turkey, pozole is really reasonable, actually downright cheap to put on the table. Now tomatillos are usually least expensive in the fall after the harvest; in most stores, they’re usually not too expensive even out of season. If they are, and you have one nearby, try to visit a Mexican or Latin market. You’ll probably be shocked by how inexpensive the prices for so many things are.

If you’re into pozole, and I hope you will be after trying this recipe, shop for the hominy and many of your Mexican food staples around Cinco de Mayo (May 5th) where it may very well be discounted, often unadvertised. If shopping around a holiday, don’t wait until the last minute to pick up your hominy. My store is often sold out.

As far as the tortillas, I rarely see them on sale. Look for them in endcaps, in the refrigerator section, and in the Mexican food aisle and compare the prices.

A pozole made with leftover turkey – maybe your Thanksgiving turkey. It starts with broth & turkey made from the turkey carcass, but if you need to use store-bought chicken broth, or substitute chicken, that’s fine, too.

Add tomatillos, onion, garlic, and hot peppers to a pot. Cover with about an inch of water. Bring to a boil and turn down to a lively simmer. Continue to simmer for several minutes until tomatillos have softened but not burst.

Remove the tomatillos, onion, garlic, and peppers to a blender, reserving the water they were boiled in. Work in batches if needed. Add the cilantro and add about a half cup of the reserved water to start the blending process and process until a smooth, cohesive sauce comes together.

Be careful blending hot liquids. Slightly loosen the pour spout of the blender and hold the lid down with a kitchen towel or hot pad.

Heat oil or fat over medium-high heat in a large frying pan with high sides. Add the green sauce and cook for several minutes until the sauce turns from bright green into a dull army green color.

Bring 7 cups of turkey broth to a simmer. Add in Verde Sauce, hominy and marjoram along with the sliced corn tortillas if using. Simmer for about 20 minutes.

Taste for salt and pepper, add turkey and a little water if needed to bring to desired consistency.

Today I’ll be sharing this recipe at our very own Throwback Thursday Link Party. You might want to bookmark this special two week extravaganza – they’re all lots of links to both Thanksgiving & Thanksgiving leftovers, Thanksgiving Crafts & Holiday Decorating.