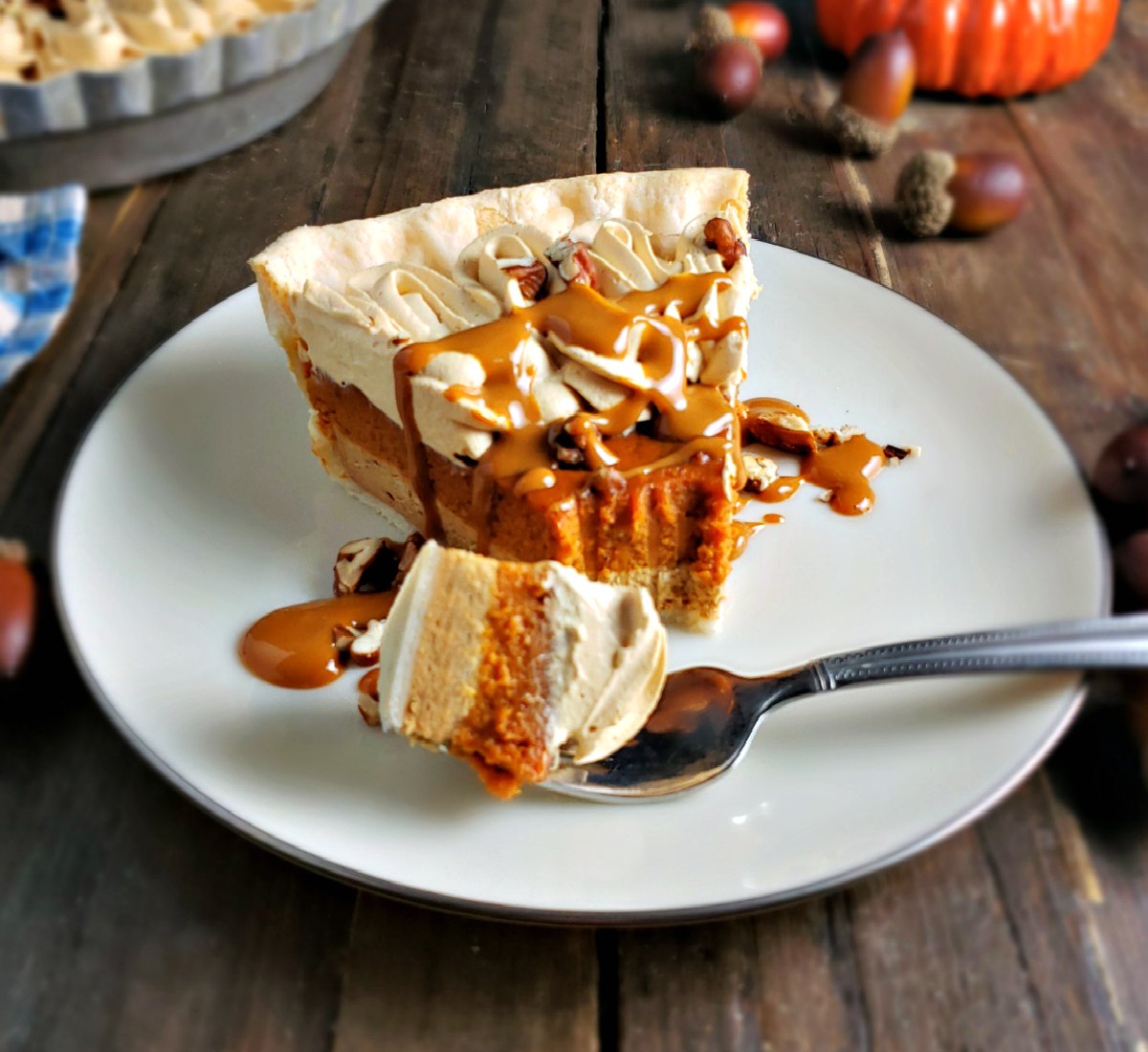 Another pie? Why not!? Because I already made my Fave Pumpkin Pie last week, and then a knockout Caramel Creme Pumpkin Pie. So for actual Thanksgiving? A Two-Layer Dulce de Leche Pumpkin Pie. The bottom layer is a lush cream cheese concoction & the top, a classic pumpkin pie layer. The best part of the pie, though, has to be the Dulce de Leche Whipped Cream that can be plopped or piped over the pie and a little drizzle of that caramelly Dulce de Leche topping. That Dulce de Leche whipped cream, though, literally stole the show.

I know all this because I had my piece early. Hey, I HAD to. I had to get a photo, didn’t I? So I was just going to snap a few pics, but then I had to have a taste. Just one really teensy, tinsey taste. For quality control. Well you know where this is going, don’t you? Yep, I ate the whole piece BEFORE Thanksgiving dinner. I think that should be a new tradition. Pie first!

As you can see, this pie kind of an extravaganza. A show stopper. It looks like a big deal, but it’s surprisingly easy. I love recipes like that, don’t you? Ones that make you look like a genius but are easier to pull off than you’d think. I did pull out the piping bag for the Dulce de Leche whipped cream just to fancy it up, but that’s optional. A giant star tip and a couple of minutes was all it took to run around the edge of the crust. No one is going to turn down a piece of this!

This recipe is supposed to have a hazelnut crust (and it’s so good) but true confession. I just ran out of time and used a store-bought crust. Hey, I’m a food blogger, not a martyr and ya just gotta do what ya gotta do, so thank you Pillsbury!

See, it’s been a strange Thanksgiving. Illness, traveling and the freak ice/snowstorm I drove through to get home from the folk’s house to Thanksgiving at mine. I literally went over a hill and it went from dry roads to cars were everywhere over the road and in the ditch. I tried to pull over to several times thinking I’d get a motel room and wait it out, but couldn’t make an exit ramp; for one it was too slick to turn even at the 15 to 20 miles an hour I was going and the approaches to and the exit ramps themselves were all lined with spun-out and overturned vehicles who had tried. It added hours to my trip and I was just about shaking through the whole thing.

When we finally got home, Chance, deplorable Chance, who can still worm his way under my bed found a bottle of Vitamin D that must have been under there. Until I heard the crunch of the pill bottle I didn’t even remember I had lost them a couple of years ago. He’s going to be fine, thank goodness (and thanks to a great vet) but that was a big, huge deal and I had to give him fluids from an IV multiple times over Thanksgiving weekend. I was just about shaking when I was doing that, too. I have so much more respect for those in the medical community. Just the feel of that needle going in makes me shudder.

So I have a lot to be grateful for this Thanksgiving. I feel as if someone were looking out for us and don’t know how we made it through pretty much unscathed. And hey, we had pie!

Chance at the vet’s. Not too happy…

So hey, maybe I deserved that piece of pie I snitched! But enough about me. I think you’re gonna love this pie, and hope you’ll enjoy it as much as we did! It’s luscious and creamy and utterly decadent.

And if you make a Pumpkin Cheesecake & a Pumpkin Pie every year, well, this will serve for both. Just make more than one pie. Make lots & lots of them. Everyone will want seconds and some to take home, and unlike cheesecake (this one, Martin Sheen’s Pumpkin Cheesecake is a great one) this pie (although it is a little more filling than your standard pumpkin pie) is rather modest in size.

Start this pie by making the pie crust, putting it in the pie plate then mix together the cheesecake layer. Add that to the pie and refrigerate 30 minutes. Then it’s standard. Mix up the pumpkin portion of the pie (To measure the 1 1/4 cups of canned pumpkin, just take a quarter cup out and use the rest of the can. Make Pumpkin Spice Lattes or share with your puppy!) pour it over the cheesecake layer and bake.

Make the Dulce de Leche Whipped Cream, thin the rest of the Dulce de Leche with a little milk, chop a few nuts for garnsh and you’re set to serve. This pie, with the whipped cream, holds up very well but do drizzle and sprinkle on the nuts at the last minute.

When you bake this pie, start out with a pie shield (you can buy them or easily make one from foil, see this post on Blind Baking a Pie Crust) and then remove it halfway through. If you use a store-bought or standard pie crust rather than the hazelnut one (and that’s good with pecans, too.) Add the pie shield as soon as the crust is browned, about 20 to 25 minutes in.

Take a lot of care in heating up the Dulce de Leche for the drizzle. Dulce is thick and can clump up if you go all out on it. Put it in a heavy container like a pyrex measuring cup and slowly heat in the microwave for about 10 to 15 seconds at a time until it’s loose enough to add a little milk to it.

Yeah, you’ll have to stand at the microwave and monitor but it’s only going to take 30 to 40 seconds. Add the milk, literally by the teaspoon at first, then when that’s stirred in, add a little more and so on until it’s the consistency that it can be drizzled. As it cools, though, beware; it will thicken up. It’s hard to give an exact amount because Dulce de Leche can vary in how dense it is, depending on the brand.

I wanna talk a little bit about Dulce de Leche because I know not everyone has had it or heard of it. It’s basically a thick, rich caramel. The name, according to Wikipedia, is Spanish for “Sweet [made] of milk” or “caramel” and it’s a confection made by slowly heating milk and sugar until it caramelizes. You can buy it in jars or cans at the store (check the Mexican or Latin American section or check a market if you have one) or easily make your own. I make mine from a can of condensed milk in my slow cooker.

Every season, I mix up just enough of one or two of my three Homemade Pumpkin Pie Spices on this post, a Trio of Pumpkin Pie Spice. I don’t want the extra expense of buying what I can easily make with the common spices in my cupboard and I love that it’s so much fresher and I don’t have a commercial one hanging out in my very tight spice cupboard.

And of course, over the pre-holiday sales, you’re going to find all these ingredients at a low at one store or another. Do yourself (and your budget) a favor and shop selectively and stock up on all the seasonal ingredients (and by that I mean Thanksgiving or Christmas season) that you’ll use throughout the next few months until the next great holiday sales hit around Easter. Check out my post on Thanksgiving, Christmas & New Year’s Sales for items to look for.

A two layer pie, rich cheesecake on the bottom, pumpkin on the top and the Dulce de Leche whipped cream steals the show!

Note on Dulce de Leche: divide the can into 2 tablespoons for cream cheese layer, 3 heaping tablelspoons for whipped cream, the rest for the drizzle

On a floured surface, roll Hazelnut Pastry into a 12-inch circle. Ease pastry circle into a 9-inch pie plate without stretching it. Trim pastry to 1/2 inch beyond the outside edge of pie plate. Fold under extra pastry. Crimp edges as desired.

In a small mixing bowl beat cream cheese and 2 tablespoons of the dulce de leche with an electric mixer on medium to high-speed for 30 seconds. Add 1 egg; beat on medium speed until smooth. Spread evenly in the pastry-lined plate. Cover and chill for 30 minutes.

Cover edge of pie loosely with foil. Bake for 25 minutes; remove foil. Bake about 25 minutes more or until filling is set in the center. Cool on a wire rack.

To serve, top pie with Dulce de Leche-Hazelnut Whipped Cream (dollop or pipe) sprinkle with hazelnuts (if desired), and drizzle with additional dulce de leche. Slightly heat in the microwave and stir in a little milk, a bit at a time, to thin for drizzling.

In a medium bowl stir together all-purpose flour, hazelnuts, and salt. Using a pastry blender, cut in shortening until pieces are pea-size.

Gather flour mixture into a ball, kneading gently until it holds together.

Today I’ll be sharing this recipe at our very own Throwback Thursday Link Party. You might want to bookmark this special two week extravaganza – they’re all lots of links to both Thanksgiving & Thanksgiving leftovers, Thanksgiving Crafts & Holiday Decorating.