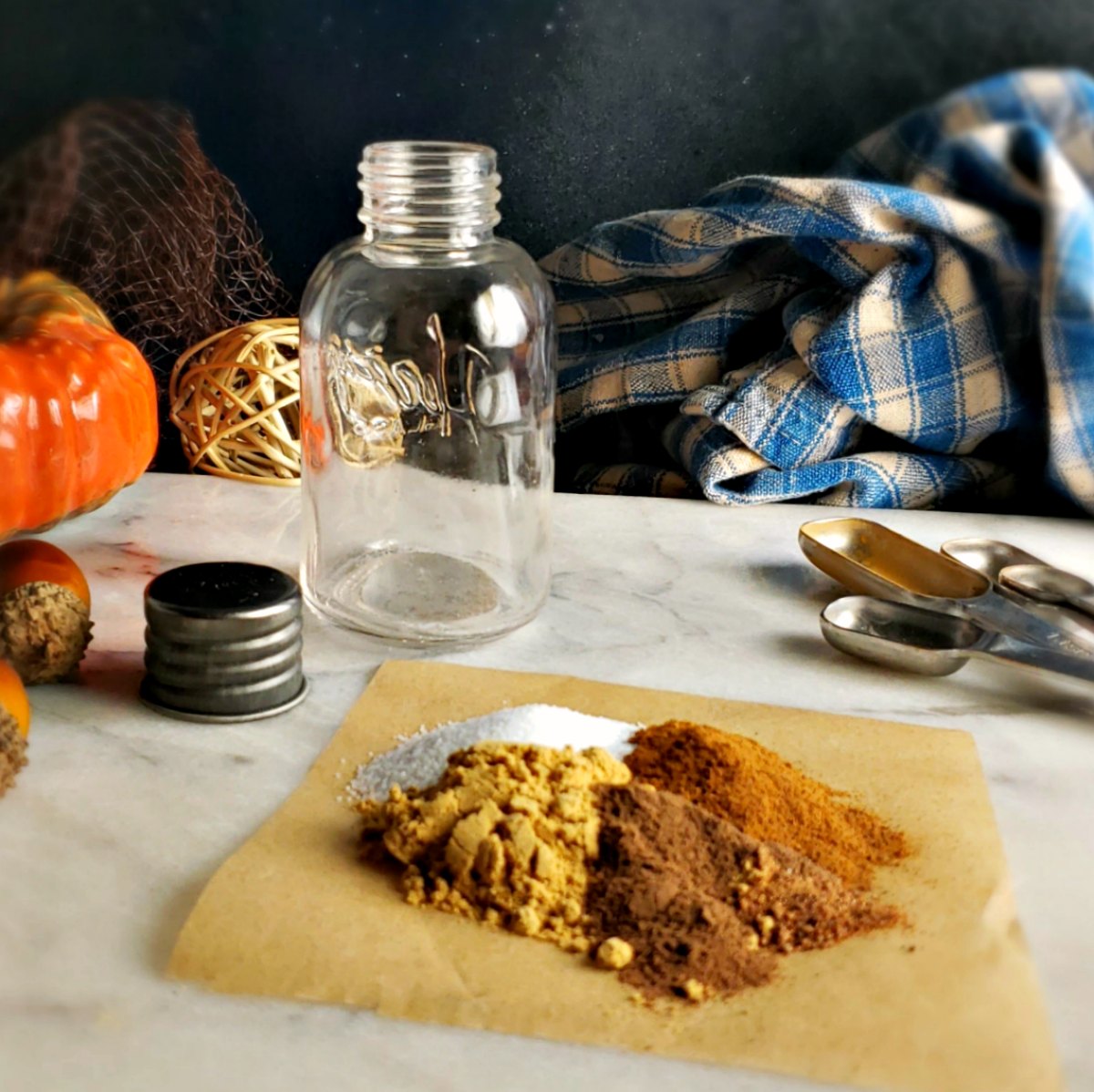 For years it seemed the only way many North Americans, at least here in the States, ate pumpkin was in pumpkin pie. And just about the only way Pumpkin Pie Spice was ever used was in Pumpkin Pie. Well, there were just a few other pumpkin desserts but they were usually few and far between. Until recently – and now there’s Pumpkin Spiced everything! And so you will want to keep up, so here’s 3 different Pumpkin Pie Spices – A Trio of Recipes. So you have choices & options from classic to stand-out to a special signature blend.

Who would have ever thought that a simple blend of spices like Pumpkin Pie Spice would build to such level of popularity every fall? To the point that some people can’t wait for it to start and others can’t help but groan! I “blame” Starbucks with its incredibly popular Pumpkin Spice Latte. I bet Starbucks rejoices every fall and so do the spice companies! (I think this is as good of a place as any to put in a shameless plug for my DIY Pumpkin Spice Latte…) I’ll show you a few pics of some of my other fave pumpkin recipes as I talk about the three different spice blends, or you can jump ahead.

About Pumpkin Pie Spices – A Trio of Recipes:

You always have a few choices when it comes to your pumpkin pie spice. You can grab a kinda generic one from the bags in the produce aisle, or one of the little cheapie ones from the spice aisle. You can go up a grade or two and pick up a grocery store name brand, in a glass bottle. Or you can buy your blend from a spice house. And no matter which way you go, you’re probably going to get just what you pay for.

Unless you make your own. When you do that, yes, you’ll probably save a bit of money, but you’ll also guarantee that you have your own specialized custom blend (and you can feel free to tinker with any of these recipes) and you’re going to have the freshest pumpkin pie spice with the best flavor, possible.

Bonus: you can make as little or as much as you want to and you won’t have an expensive jar fading away in the back of the spice cupboard until the following year. Here’s another shameless plug – this one for my fave pumpkin pie, Pam Anderson’s Silky Pumpkin Pie, below.

I know when I use my homemade Pumpkin Pie Spices in a recipe, it never fails to get compliments and queries. Everyone that eats a piece of my pie or whatever else I might be making almost always asks about it – they seem to think I’ve done something really special. So no matter what you’re making, give your own DIY Pumpkin Pie Spice a shot. Use it in your pies, cakes, cookies, lattes, mousse, flans, cheesecakes or whatever other pumpkin spice concoctions you’re making this fall!

Of course, I couldn’t stop at just one Pumpkin Pie Spice so I gave you three. To use, instead of mixing up the specific spices in whatever recipe I’m making, I just sub in the same amount of one of my Homemade Pumpkin Spice Recipes for the total of spices in a recipe.

So if a recipe calls for 2 teaspoons of cinnamon, 1/2 teaspoon of ginger and 1/4 teaspoon of nutmeg, I’ll use 2 plus 1/2 plus 1/4 teaspoons for a total of 2 3/4s teaspoons of one of my blends. Now I can’t have you just reading a lot of text, can I? This is a newer dessert to my table, Make-Ahead Pumpkin Cheesecake Parfaits. I love these!

I often multiply out recipes like this and store in an airtight jar, and I’ve given measurements for one pie and for four in each of the recipes below. That’s because I almost always make two pies at a time, so I have enough for two more later. This works well for me: two for Thanksgiving and two for Christmas.

Note: these measurements all assume you’re using store-bought spices, not grinding or pulverizing your own. This is particularly important with nutmeg, a spice that will completely overwhelm the flavors if you substitute a freshly grated nutmeg for a commercial variety of ground nutmeg.

I know I showed my nutmeg grater in a pic; just ignore it. It was only there for looks. One more of my fave recipes, Martin Sheen’s Pumpkin Cheesecake. This is a fabulous cheesecake! Now you’re almost to the three different DIY Pumpkin Spice recipes if you didn’t already skip ahead!

Saving Money on Pumpkin Pie Spices – A Trio of Recipes:

I make most of my own spice blends, especially if they’re made from items I usually have in my spice cupboard. A quick rule of thumb: if the blend at the store is more than an equal amount of the most expensive ingredient in it, then you’re way better off making it yourself.

Many times a blend only has a smidge of an expensive ingredient and all the rest are “cheapies” or common everyday spices. You’re probably better off making your own in that case, too. What the heck, to be honest, you’re usually you’re better off making your own no matter what, especially if you cook regularly and have a constant rotation of spices coming in and out of that cupboard.

And of course, these Homemade Pumpkin Spice Recipes are all based on very common spices that might already be in your cupboard and/or are very easy to pick up anywhere in the store; look for spices at a discount in the produce aisle in bags, the bulk aisle, sometime the discount aisle if there is one and probably last of all, the actual spice aisle. Some common spices can be bought in larger amounts at the store, the Buyers’ Club and surprise, the Dollar Stores.

The ginger in this blend is a little more forward than many other Pumpkin Pie Spices, while cinnamon takes second chair. The final result is a pumpkin pie that’s still very familiar but has a subtle flavor that not only lets the pumpkin flavor shine through but will make those eating it take a little notice.

A bit more highly spiced than Libby’s this one has more cinnamon and the addition of nutmeg. It’s got such a stand out flavor! This is deeper and darker!

This is the Classic Pumpkin Pie Spice…no I didn’t really grind the spices. For decorative purposes only!

This is the absolute classic Pumpkin Pie Spice, familiar to anyone who’s ever picked up a can of Libby’s for Thanksgiving since the 1950s. It’s heavier on the cinnamon and will give you that classic fine leather color to your pumpkin pie!

This is Libby’s Pumpkin Pie Spice

Mix for one pie:

14 thoughts on “Pumpkin Pie Spices – A Trio of Recipes”