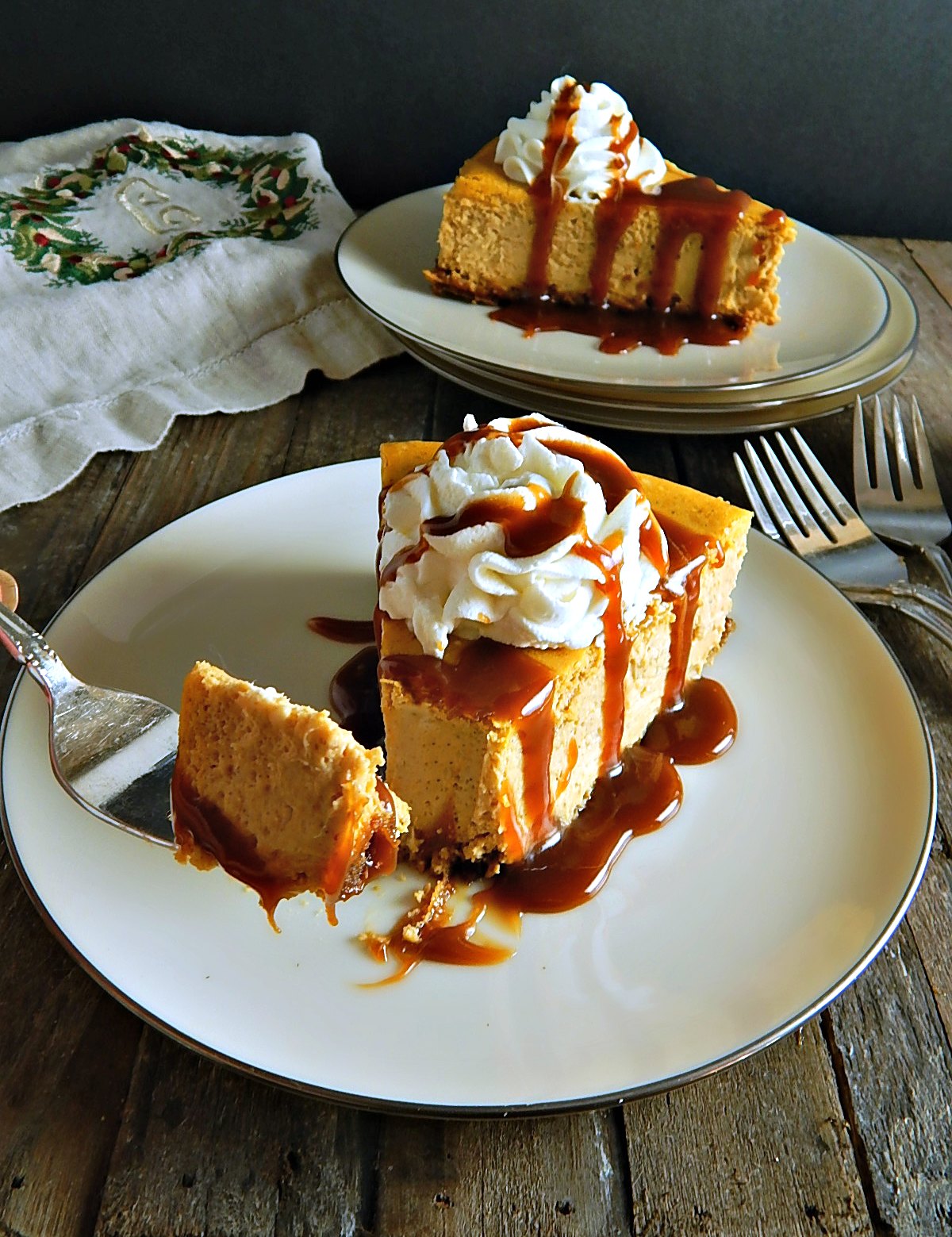 I remember Martin Sheen was featured once on the back pages of Bon Appetit, where they used to run a celebrity spot every month. It wasn’t until I got my copy of “Best American Recipes 2003-2004” by Molly Stevens (I loved that series of books) that I paid attention. She highlighted Martin Sheen’s Pumpkin Cheesecake in the most glowing terms. She’s not wrong!

Martin Sheen’s Pumpkin Cheesecake IS spectacular. It’s easy to make too, and it’s large, serving 12 to 16. The perfect thing when there’s a big crowd at the table for a holiday dinner or to bring to a potluck or serve for a buffet. I serve it for Thanksgiving or Christmas and anytime in between.

Molly Stevens said, “Sheen raved about a pumpkin cheesecake made by his daughter…and served by his family every Thanksgiving.” She went on to say “The Boss is right, this is spectacular…It’s a high, firm, mellow cheesecake, gently spiced and it looks like the product of a fine bakery. That’s not too surprising because Sheen’s daughter used to be a pastry chef” (And this cheesecake will make you look like a pastry chef, too!)

The “Boss” is referring to Sheen’s part as the President in the show West Wing. That show kind of came on my radar after seeing it mentioned in Molly Steven’s book (and trying Martin Sheen’s Pumpkin Cheesecake) and I liked it a lot. And I like Martin Sheen’s Pumpkin Cheesecake a lot, too. For years it was one of my go-to holiday desserts. So this year, I pulled out the recipe card and made it again. And it was as good as I remembered.

I always keep the cheesecake part of the recipe just as is, but I love to change up the graham cracker crust to one made with gingersnaps. See, the cheesecake is just gorgeous, but it’s a lot of pumpkin and the gingersnap crust adds a different note. And while in 2003, it might have been ok to serve a cheesecake plain, basking in its own glory, the game’s been upped in recent years. Try garnishing it with a drizzle of my Salted Caramel Sauce and then, the most important thing, a few crushed gingersnaps on top to add texture in what is an otherwise a very soft dessert. (I forgot to do that before taking most of the pictures.)

I bought a 10″ Springform pan for this recipe after being convinced by Molly Stevens. The filling literally comes to 1/4″ from the top – this is a BIG cheesecake. Fair warning: you won’t get by with using an 8 or 9″ pan. If you don’t have a 10 inch &, don’t want to buy one (recipes for the larger pan just aren’t as common) you can cut the recipe back to conform to a smaller pan but you’ll have odd amounts of ingredients leftover. Another option is to fill the cheesecake pan you have and bake part of the filling in another pan, like a baby cheesecake pan or small casserole. Watch the timing if you do that.

The recipe is absolutely simple and straightforward to make but follow good cheesecake procedures. You’ll want to use room temperature cream cheese, eggs, and any dairy. Eggs should always be added one at a time and the batter scraped up from the bottom and incorporated before the next egg is added so you won’t have lumps. You’ll want to beat on low and only as little as possible after each egg & any ingredients after the eggs go in. It makes a big difference in how your cheesecake turns out.

The original recipe calls to wrap the springform pan in two layers of heavy-duty aluminum foil (you’ll need the wide roll) before pressing in the crust. I used to do this but once put a small tear in the foil as I pressed in the crumbs and didn’t realize it. Now I wrap the pan after the crust is baked. However, it’s a good idea to have a layer of foil under the crust as it bakes just in case it leaks, so I just put one of the layers of foil that I will use to wrap the cheesecake in on the shelf under the springform pan as I bake the crust. Then when the crust is cool and the cheesecake is filled, I put the springform pan on top of the two layers (one from the oven) of foil and wrap it. That way I don’t waste a large amount of foil.

Pulse 29 Nabisco Gingersnaps until fine crumbs in a food processor, you’ll get 1 3/4 cups of crumbs. Be patient; they take a while to break down. Add a teaspoon of cinnamon and 1/2 teaspoon of ground ginger. By hand, stir in about 4 1/2 tablespoons melted butter, but hold back a bit at the last tablespoon. Give the crumbs a squeeze. There is enough butter when they hold together; the crumbs should not be “wet” or the excess butter will leak out of the pan and your crust will be soggy. If the crumbs don’t hold together, add the remainder of the butter bit by bit until they do.

This post is too long as it is, so no money-saving tips, today. Just enjoy it, it’s a marvelous cheesecake and I promise you’re gonna be a hero when you bring this cheesecake to the table! And happy whichever occasion you are making this for!

This is a gorgeous cheesecake, beautifully spiced. Garnish with salted caramel sauce for a spectacular finiish!

Equipment: 10″ springform pan, wide heavy-duty aluminum foil, roasting or another pan large enough to accommodate springform pan. Large star tip and piping tip or Ziploc bag to garnish. (Note, my roasting pan, when filled with water, does not come up to 1/2 the level of the cheesecake and it turns out just fine.)

To make the Crust:

Combine the graham crackers, sugar, and cinnamon in a food processor. Process until the graham crackers are very finely ground. Drizzle the melted butter over and pulse until the crumbs begin to stick together. Press the crumbs over the bottom (not the sides) of the prepared pan. Bake in the middle of the oven with one layer of heavy-duty foil (large enough to wrap the cheesecake in later) on the shelf below the crust. Bake until the crust is slightly golden, about 8 to 10 minutes. Transfer to a wire rack and cool while preparing the filling.

To make the Filling:

Using an electric mixer, beat the cream cheese and sugar in a large bowl until smooth and fluffy. Beat the eggs on low speed, one at a time, stopping to scrape well after each addition and beating only enough to incorporate each egg. Add the pumpkin and the remaining ingredients and beat until just mixed. Pour the filling into the prepared crust.

Place the springform pan on two layers of wide heavy-duty aluminum foil (use the one in the oven for one layer) and carefully wrap. Place into a large roasting pan and add to oven. Carefully pour hot water to come halfway up the sides of the springform pan. Bake the cheesecake until the filling is slightly puffed and softly set (it should jiggle ever so slightly in the center and the edges should be firm) and the top is lightly golden but not browned, about 1 1/2 hours. Transfer the cheesecake to a wire rack to cool. (Note: I found it easiest to turn off the oven and leave the door open until the hot cheesecake and water had cooled to a reasonable temperature to handle.)

When ready to serve, carefully dab any moisture that may have accumulated on the cheesecake with a clean towel or paper product. Release the springform pan and serve in wedges, garnished as desired.

To whip cream, place cold cream in a cold bowl and beat until soft peaks form. Add the sugar and cornstarch and continue to beat until stiff peaks. Add to piping bag with a large star tip. Carefully pipe rosettes, one in each anticipated slice. For instance, if dividing cheesecake into 12 slices, pipe twelve rosettes. Mentally (or lightly mark) cheesecake into 4 quadrants. Pipe four rosettes on top, close to the edge of the cheesecake at each of those four lines. Then fill in the rest.

Drizzle each serving with Salted Caramel Sauce, and garnish with crushed gingersnaps.

Note: Cheesecake ingredients are exactly as published, the directions have been changed up to clarify and prevent any possible cracking as the cheesecake cools. Garnishes are my suggestions.