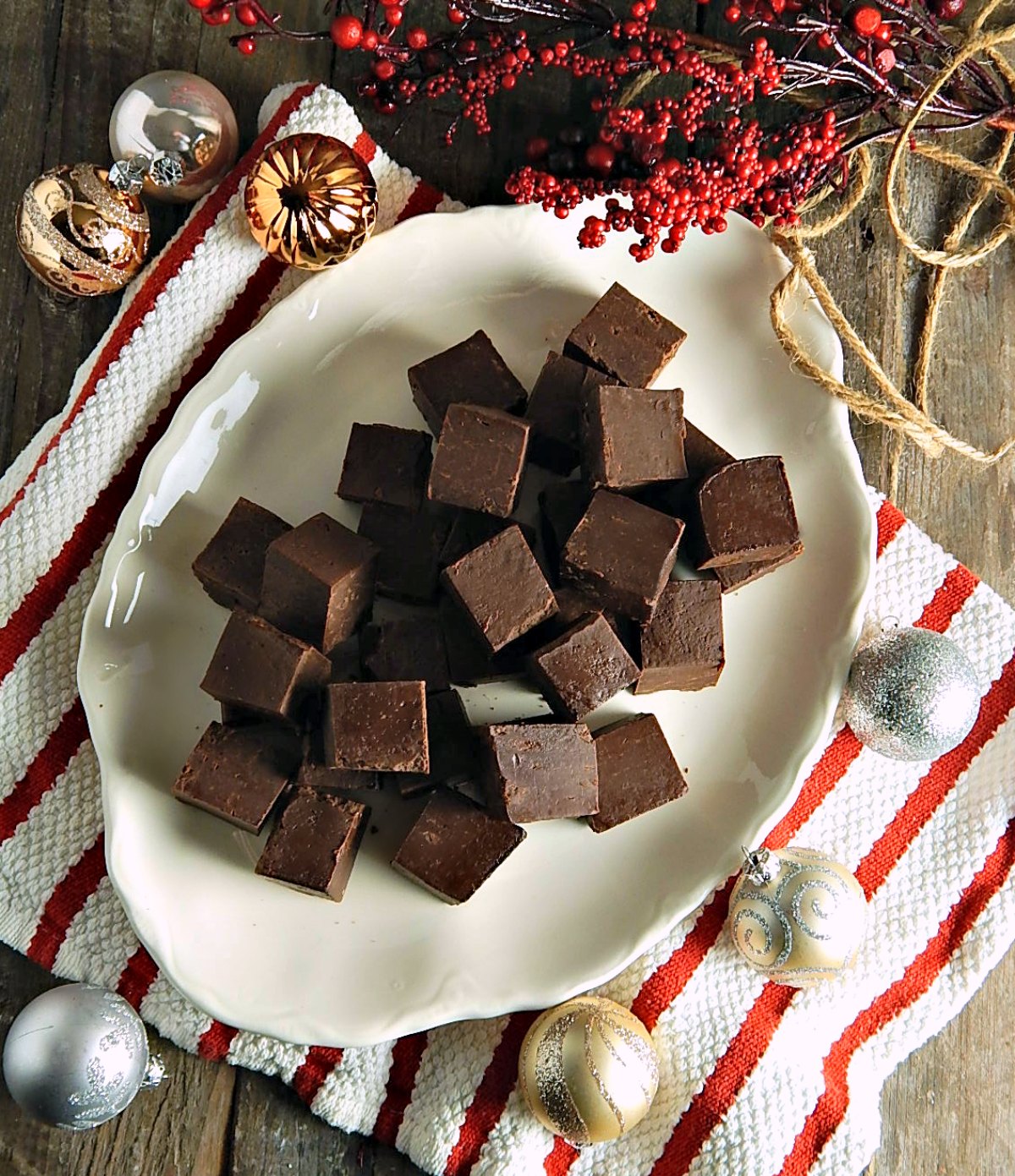 Guys, I gotta tell you I haven’t been this excited about Fudge for a long time. My wonderful neighbor and friend (thank you “S”) dropped off some Fireball Whiskey Fudge the other day. I fell in love at first taste. And the funniest thing about that is that I’m not a huge fudge person and I don’t care much for Whiskey.

The other strange thing is that “S” doesn’t really cook/bake much. And yet there in front of me was one of the best fudges I’ve had since my Mom’s and I haven’t had that since the ’70s. So how could this be – I had to know what magical alchemy was at play and I knew as soon as “S” shared her recipe that I had to share this with you. Maybe you’ll want to make a batch for the holidays or share some as a Christmas or Hostess gift.

It turns out that Fireball Whiskey Fudge is not only uber delish, with the perfect texture and a fantastic flavor, but it also’s super easy and takes minutes to make. The only hard part? It has sit before you can eat it. And that’s kind of a bummer because you’ll want it right away, lol! Console yourself by licking the bowl. Yeah, it’s that good!

When you taste the Fireball Whiskey Fudge you won’t even guess that’s there is Whiskey in it, unless maybe you already know. And while Fireball Whiskey reminds me a bit of the Red Hot candies, you don’t pick up a lot of that flavor, either. The Fireball Whiskey just adds a little sumpin’ sumpin’ that kind of tickles your taste buds and wakes up the flavor of the chocolate. It’s highly nuanced if I can use that term. There’s just a hint of the warm flavors and it makes the chocolate taste better if that’s possible.

Not having any Fireball Whiskey, and eager to try this fudge myself, I cheated and made my batch with Bailey’s! Again, you don’t really think “Bailey’s” when you taste the fudge, but the Bailey’s, just like the Fireball Whiskey, leaves behind a subtle note. The Bailey’s fudge, which is actually in the pics is a little stiffer that the fireball fudge was. Probably because there is more alcohol in the Fireball Fudge so it set a little looser.

I can’t wait to make more though – I can see myself going on a fudge bender, making batch after batch with everything in my cupboard, so many batches that people are going to get tired of all their fudge gifts! And this fudge is the perfect easy thing to whip up for a Christmas or Hostess gift. There’s no need, though, to tell anyone how easy this is. It can be our little secret. Let them think you slaved away!

After getting the recipe (and shocked at how easy and simple it is) I did a little research. It turns out that this fudge is based on the Foolproof Eagle Fudge, from the condensed milk that’s in the recipe. If you know about this fudge, you’re probably already nodding but if you are like me, you’re gonna be, “Wait! Did you say Condensed Milk?” Yeah, I straight up did.

This fudge is three ingredients, Chocolate Chips, Condensed Milk and the Hooch. There was vanilla in the original but I left it out – I didn’t want it masking the subtle taste of the booze. Besides, have you looked at the price of good vanilla these days? Why waste a drop of it when you’re not going to taste it.

Those three simple ingredients are probably something a lot of us have on hand. That makes this fudge a little dangerous – it can be stirred up at the drop of a hat. It’s probably a good thing you have to wait for it to cool and firm. I use the microwave; just be careful in melting the chocolate, stop and stir and then heat a bit more and repeat. If it gets too hot it can seize and burn. And do note that you’re only going to use a partial can of the condensed milk. Measure it out, one cup. That’s because your liquor is going to be part of the liquid ingredients. If you don’t measure out and use the full can of condensed milk, your fudge won’t set right. (If this happens to you, use it for hot chocolate.)

There is no better time than right now, smack dab in the middle of the Winter Holiday season to stock up and buy baking goods. The next great sale will be Easter, with only Valentine’s day promising discounted chocolate, so buy accordingly. Check out my list of what you should be looking for on my Thanksgiving, Christmas and New Year’s Sales post.

Liquor, like so many items, has “seasonal” sales. Liquor stores also have great sales during many holidays, but for your “fancier” items, the winter holiday sales are one of the biggest. If you’re the type that likes to stock up, sign up for email alerts and watch for the annual sales at the end of February, beginning of March, too.

Line an 8 or 9″ square pan with foil; Place one piece, the width of the pan going in one direction, and a second piece, crossing over the first at right angles, extending foil over edges of the pan.

Add chocolate chips and sweetened condensed milk to heavy saucepan over low heat. Stir gently and often. Remove from heat when chips are just melted. Stir in liquor. Spread evenly into prepared pan. Chill 2 hours or until firm. Remove from pan by lifting edges of foil. Cut into squares.

Add chocolate chips and sweetened condensed milk to a 1 quart glass measure. Cook on high for 1 1/2 minutes. Stir, Return to microwave and continue to cook for one-minute intervals, stirring after each, until the chips are melted. Remove from microwave and stir in liquor. Spread evenly into prepared pan. Chill 2 hours or until firm. Remove from pan by lifting edges of foil. Cut into squares.

I’ll be sharing Fireball Whiskey Fudge (Three Ingredients) at Fiesta Friday 255, hosted this week by Jhuls @ The Not So Creative Cook and Diann @ Of Goats and Greens.