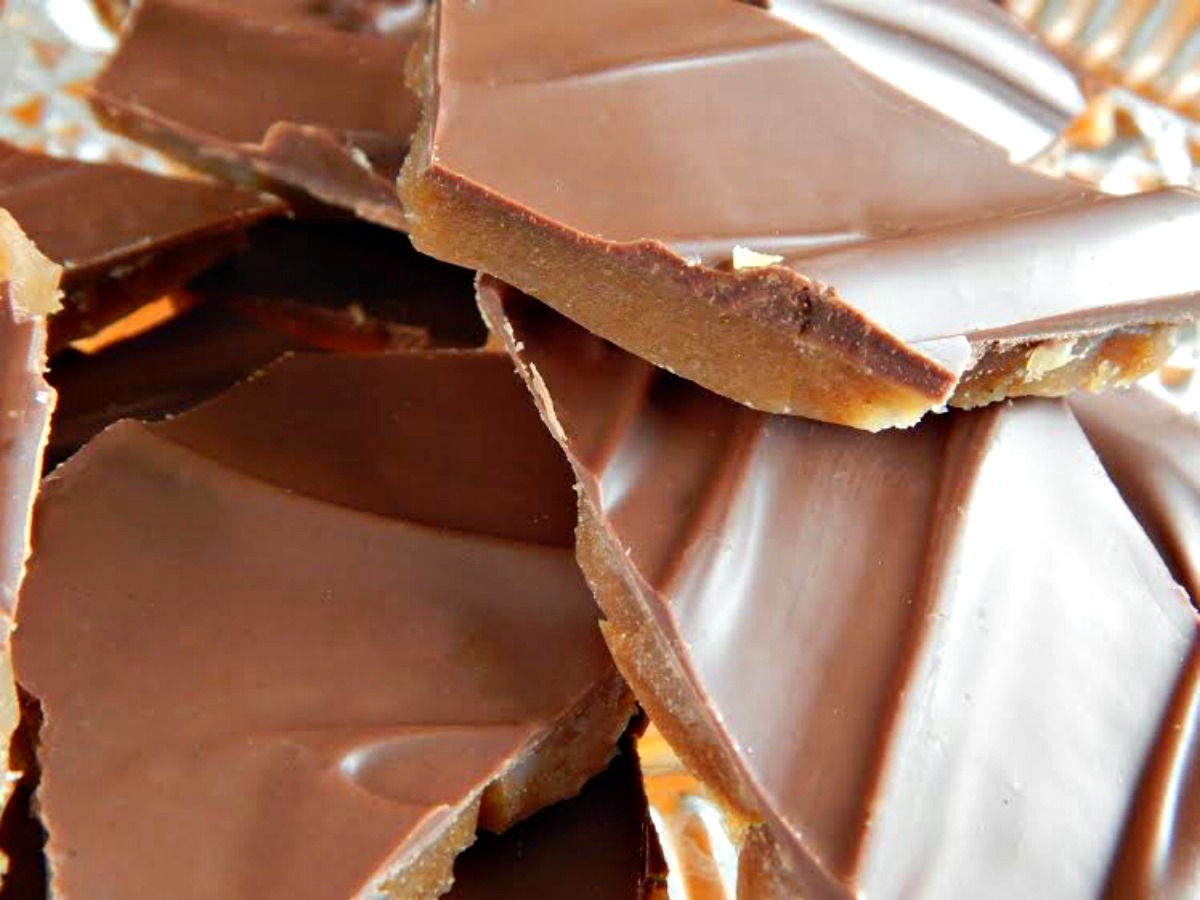 My Aunt Ginny was famous for her Toffee, a Christmas treat, and I remember “helping” her make it when she visited. Even as a kid I was always hanging out in the kitchen. And when it was something curious like the alchemy involved in candy making, it was magic for me. It still is. 🙂

This is the same Aunt Ginny who is responsible for the Beef Strogonoff recipe when she brought back the recipe from Russia. I found her fascinating. Ginny was an interior designer and a hugely successful one. Ginny decorated the Des Moines Country Club in the 70’s, before moving on to San Francisco and better opportunities.

Tall, elegant, striking, she wore gorgeous clothing and wore it well, and had a very cultured accent that is seldom heard any longer, and was almost always accompanied by a Great Dane or two. Ginny was also, like many designers of today and women of her age, a seamstress, which should do nothing to negate from the image of the thoroughly modern woman she was.

One year she crafted matching outfits for my cousin, my sister and me, and of course we were all thrilled and threw a Partridge style concert – what took the look over the top was a wig of my Mom’s, along with the headbands that matched the outfits. Oh, the ’70’s!

This year my Sister made the toffee and snapped a photo for me! Love ya Liz!

When Aunt Ginny didn’t visit, she’d send a package, beautifully wrapped, of her English Toffee. I didn’t understand that her tradition wasn’t just a holiday tradition, but a family one as well, a nod to the English and Scottish ancestry on my Dad’s side of the family. It really wasn’t until years later, delving into the family history, that I “got” it.

The first time I made Ginny’s toffee, I turned it out on a pristine counter, just as I remembered Ginny doing – it took days of chipping and hot rags to dissolve the candy that was so firmly adhered! I imagine she had buttered or oiled the counter and I had forgotten!

Sometimes old recipes are like that – they’re just ingredients or vague guidelines and the real “teaching” involved is passed down from elder to the learner through the process of showing and then directing, an aunt, a grandmother or a mom looking over your shoulder, catching you, hopefully, before anything goes awry. I’ve added in a few hints so you can avoid my pitfalls!

For years, our toffee was eaten without any adornment, but at some point nuts and chocolate were added, a practice I’ve seen faulted by those on the other side of the pond, but a practice I heartily endorse! Especially the chocolate part. 🙂

Seriously, how good are chocolate and toffee together?

Original instructions: In a skillet, cook 7 to 10 minutes from point of boil. Pour onto baking sheet. Break up chocolate bars and sprinkle chocolate and pecans on top.

Line the bottom and sides of a 10-inch x 15-inch baking sheet with parchment paper or foil for thin toffee. If you like it thicker, like above in the photo, make a foil “pan” about 10 x 8″ on top of your baking sheet. Spread with a thin layer of butter.

In Dutch oven, preferably heavy bottomed, melt the butter over medium-high heat. As the butter melts, stir in the sugar and salt and water. Continue stirring rapidly until sugar dissolves.

Wet a pastry brush with water and press it against the sides of the pan, above the layer of melted butter and sugar, allowing a little water to drip and wash down any crystals of sugar that might have formed.

Add a candy thermometer to pan and cook over medium heat until done to desired color, 10 to 15 minutes or so, Watch carefully towards the end as the temperature will “spike” quickly. Do not turn your back on it, and should you detect even a whiff of a burnt smell, remove the pan from the heat.

Experts indicate that toffee should be a deep auburn brown and registers 300°F on a candy thermometer. My preference is to remove it from the heat at about 295 degrees, when it turns a lovely light brown color, as in the photo, above. It will have a crunchy bite, but then almost dissolve as you eat it. You’ll see whisps of uneven color throughout the toffee, this is normal. Remove from the heat and stir in the vanilla.

Immediately pour the mixture onto the lined baking sheet. For the smoothest toffee, immediately take an offset spatula and brush it back and forth across the top; it helps remove any bubbles or streaks and spread it into the corners.

To cover with chocolate, allow it to cool slightly, about 5 minutes, then sprinkle the mixture with the broken chocolate bars. When the chocolate looks glossy, spread it with an offset cake spatula or a wooden spatula, and sprinkle with the nuts if desired. If it appears the chocolate isn’t melting, invert a lipped cooking sheet over the toffee for a moment.

Cool completely (at least 6 hours) then break the toffee into chunks. Store, completely cooled, covered tightly. Toffee, if not to be eaten right away, is best stored in the fridge. Toffee, in my opinion, is best the day after it’s made.

Toffee is easy, quick to make and delicious, and chances are you will have no problems at all! I don’t want to deter you or give you doubts about trying it, but if anything does go awry:

When making toffee, it is a good idea to make sure your thermometer is working correctly. Here’s a great little discussion on checking yours.