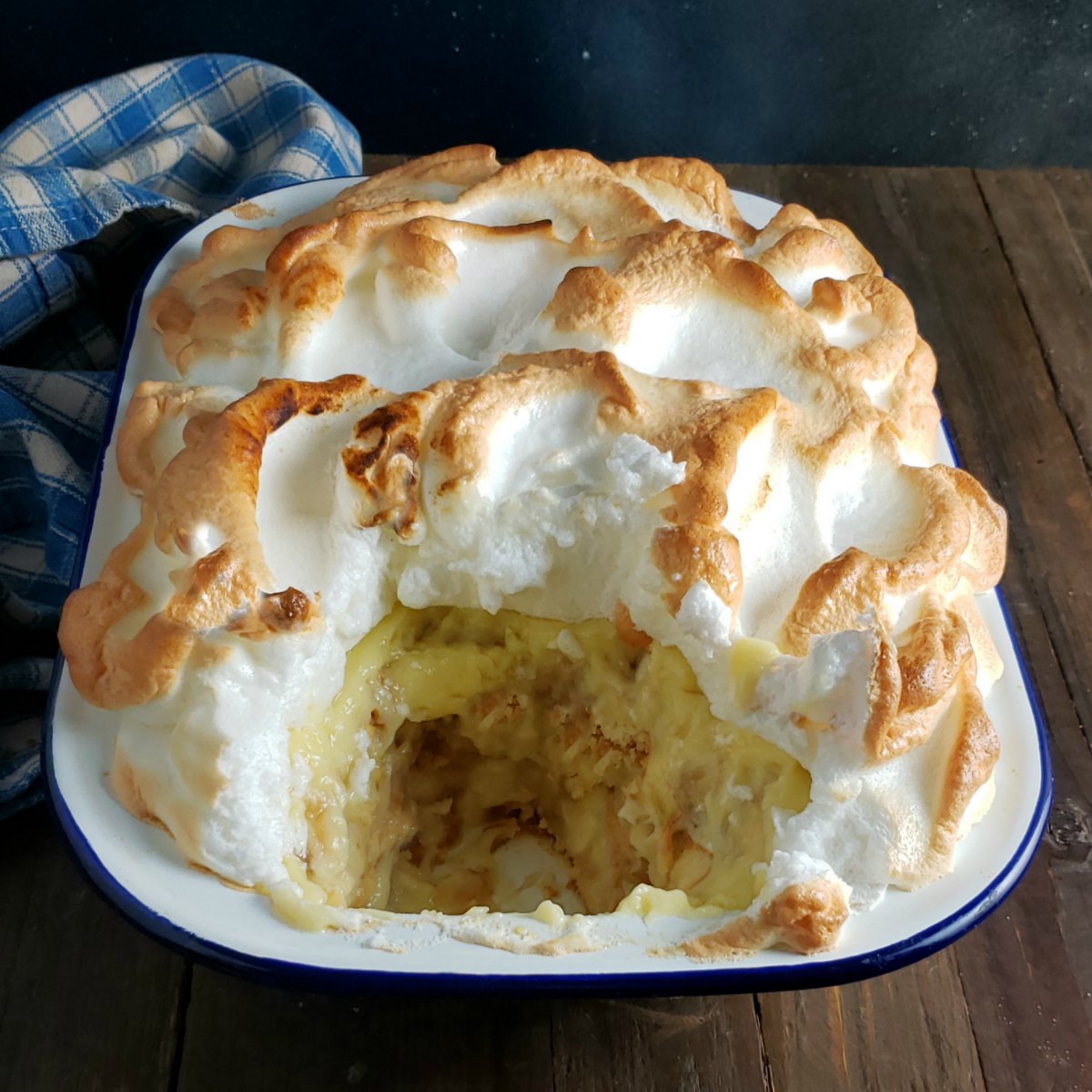 I was just a kid the first time I had the Original Nilla Wafer Banana Pudding. For a while, every year, my folks would rent a cabin on Big Spirit Lake in Iowa, sometimes with my cousins. Maybe I was five, maybe six, and this was an old green, peeling paint kind cabin, the front porch converted to bunk beds, right on the lake. The last time I was in Spirit Lake it was still there, decades later.

It really was magical, all the cousins, the teasing uncles, swimming (I don’t think there was any bathing, the lake did it all for us), amusement parks, go-carts, and of course mini golf. Falling asleep, hot and scratchy, our whole bodies sunburned and bug-bitten, to the sound of the waves, the crickets, and the train that rumbled down the nearby tracks. And there were cookouts. It seemed someone was always manning the grill!

So leave it to me to remember the food! Even at that age. Of course, that was partly because I’d never tasted anything as good as this Banana Pudding! Cold and smooth, sticky and dense, rich, and sweet! (And it’s very sweet!) It was like a dream. And I think it still is! That might be partly because at first taste, I turn right back into that skinny kid, auburn hair streaked from the sun, covered in freckles and always with a sunburned nose.

If you’ve never had Nilla Wafer Banana Pudding, what you’re in for is layers of Nilla wafers and bananas, each spread with a rich vanilla custard. Then the whole works is covered with meringue and the pudding is baked to brown it off.  Those cookies just melt right into the pudding giving it even more sweetness and a kind of heft. There’s really nothing else like it.

Now I might mention that the appeal of this dessert is down-home, for sure. It’s a kind of nostalgic, old fashioned dish that’s casual and comforting. It’s perfect for summer holidays and backyard get together. We had it this year for the Fourth of July. Over the years, I’ve tried more sophisticated versions of this pudding. They were one-offs. (Though I’m always tempted by them.) This is really the one you want, and it’s the one you’re gonna have to just take at face value and relish for what it is! And it’s a dessert to eat up right away; it doesn’t keep all that well as you can imagine with bananas and meringue!

Original Nilla Wafer Banana Pudding, a mini version to send home with Tweety for her Mother.

I’m giving you the exact original recipe with one small exception, optional. I like to add cream of tartar to the egg whites as I whip them. I just mix it into the portion of the sugar that goes into the egg whites. It helps to stabilize the egg whites which is really helpful in hot weather and since I usually make this recipe in hot weather I usually add it. That being said, if it wasn’t something I normally have on hand, I wouldn’t go buy a jar just for this recipe. I didn’t put it in the recipe, but I do add more vanilla. A half teaspoon just doesn’t do it for me!

When you make this pudding and follow the directions, you’ll set up a double boiler (more on that below) although personally I simply cook this pudding on the stove in a heavy pan and use a whisk. Cook it slowly over medium to medium-low heat,  stirring constantly until it comes to a good simmer. Turn the heat down slightly and continue to cook, stirring, until thick enough to coat the back of a spoon and to leave a distinct trail that doesn’t fill in when a fingertip is run across the spoon. It takes less time to cook directly on the stove than it does in a double boiler.

The best bananas to use in this pudding are ripe, firm bananas with no or very few brown spots. They just hold up better than any bananas that are overripe. I gotta say I’ve never tried their hint to use an egg slicer to cut the bananas, but I’m a pretty fast slicer. I just lay the peeled banana down nestled together, two in one group and three in another, and cut across them at once. Whip the egg whites very well, until they hold stiff, shiny peaks and go around the edge of the pan and nudge the meringue until it touches and seals to the edge. That’s going to help prevent and weeping meringue!

Make sure your pan is the right size. If unsure, fill it with water and measure the water, and a casserole or oval type pan that isn’t too shallow usually works best. You want the three layers to fit nicely. Do watch the meringue as it cooks in the oven; ovens vary in circulation and temperature and your mileage may vary! When finished the pudding can be served warm or at room temperature but I definitely prefer it chilled. Allow time for that. The recipe counts on 12 servings but typically I find that’s not realistic. Six is closer to the mark, 8 is small by today’s standards.

The actual notes from the Nilla Wafer box:

How to Prepare Without a Double Boiler: A double boiler helps to keep custards, such as the pudding filling for this recipe, smooth. If you don’t have a double boiler, you can make your own by placing a heatproof bowl over a saucepan of simmering water on top of the stove. Be sure to use a bowl that fits snugly over the pan. Most importantly, do not allow the simmering water to touch the bottom of the bowl. Use pot holders when removing the bowl of cooked custard from the saucepan as it will be very hot.

Make Ahead: Prepare as directed; cool completely. Refrigerate until ready to serve. Top with reserved wafers just before serving.

Make it Easy: Use an egg slicer to quickly and uniformly slice the bananas.

Original Nilla Wafer Banana Pudding – The mini version again. Just use the multiplier in the recipe to make a little extra.

The ingredients for this pudding are simple and straight-forward. There’s nothing fancy at all. No cream, no half and half. No vanilla beans! So kudos for that. These days I’ve been making a real effort to add substitutions and variations for every recipe I post; with this one, I wouldn’t sub a thing! While milk is best but honestly, any percentage will work and I do think it’s best to use extra large eggs. If you use medium or small, I’d actually add in an extra egg.

Nilla Wafers are a Nabisco product or at least labeled as such. They do go on sale regularly, especially through the summer and winter holidays. (Nilla Wafers are the key ingredient, too, for Rum Balls, a popular Christmas cookie.) In the summer you’ll often see them on sale, grouped with other popular products, graham crackers and so on in group sales, often buy so many pay so much. If you’d like to see what’s on sale during any particular holiday, check out my post, Win at the Grocery.

If you have kids, it’s likely you already know the places that regularly have the best prices on bananas and milk. These are items that you might buy so regularly that you might not think much about the price, picking up as you run out from wherever it’s convenient. Do keep in mind that it’s often the everyday purchases that can add up to a startling amount over the course of a year! It’s easy to get in the habit (I’ve done it myself) of stopping in at a convenience store for that extra gallon of milk midweek and paying through the nose for it. Paying $1.50 more for one gallon over a year’s time is about 80 bucks; most of us think little of it…but we might comb through ads for weeks to save that amount of money on a larger purchase.

Of course, I’m curious if this oldie but goodie holds some nostalgic value for you, and if so do you still make it? It’s not something I make often, but when I do, I always think it’s iconic Americana! Social distancing rules have relaxed almost everywhere but I’m high risk and still very much aware that (at my house anyway) a line can form at the dessert table. If you are making this for a cookout or having company that is social distancing, try doling this out yourself in individual dishes to make dessert quick and easy to grab rather than setting it out and having everyone help themselves. You’ll lose a little drama in the presentation but the taste…every bit as good! Take care, all!

Mix  1/2 cup sugar, flour, and salt in top of a double boiler. Blend in 3 egg yolks and milk. Cook, uncovered, over boiling water 10 to 12 minutes or until thickened, stirring constantly. Remove from heat; stir in vanilla.

Reserve 12 wafers for garnish. Spread small amount of custard onto bottom of 1-1/2-quart baking dish. Cover with layers of 1/3 each of the remaining wafers, bananas and remaining custard. Repeat layers 2 times for a total of three layers (plus the thin layer of custard on the bottom.)

Bake  15 to 20 minutes or until lightly browned. Cool slightly. Top with reserved wafers just before serving.

and at Weekend Potluck.