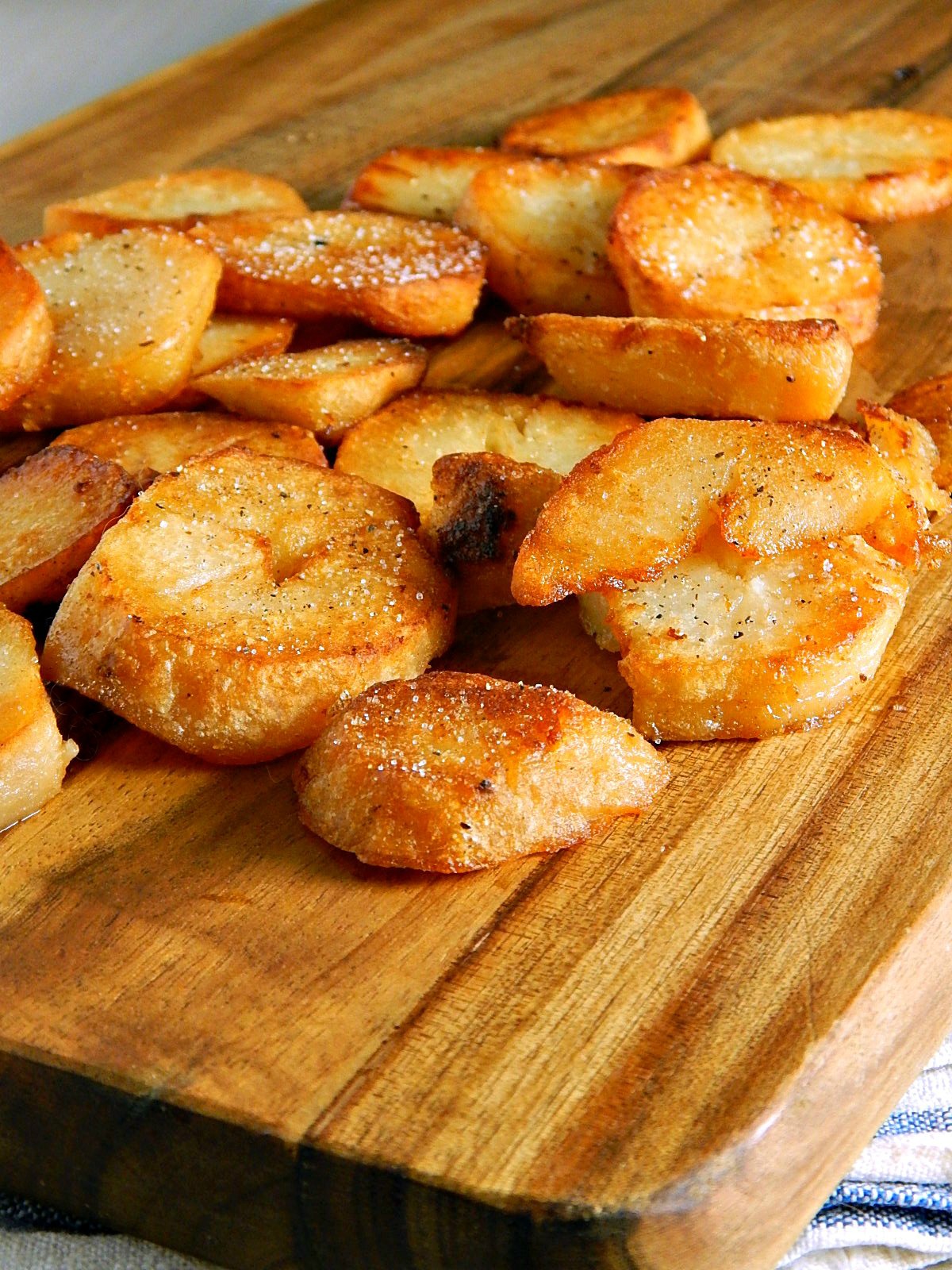 My Mom used to make what she called American Fries. She’d pull out the electric skillet (so many things were made in that! Hello Porcupine Balls, I remember you…and not fondly, either) but we were happy to see that skillet it if it meant American Fries. Now me, I think the BEST American Fries are American Fries From Leftover Potatoes.

American Fries are sometimes called Home Fries. I guess it just depends on when/where you were raised, but when I think of Home Fries I think chunky potatoes, not slices. So these American Fires are potato rounds cut and browned in a skillet. And they are delish! But starting with leftover potatoes, especially from Pot Roast makes American Fries that really fry up beautifully crunchy and delish.

About American Fries From Leftover Potatoes:

And ya’ll probably know what I mean when I say once the Pot Roast is gone, and the potatoes linger on, no-one really wants to eat them. They’re sad. Sad and grey and cold and they’re just not that great. (Even if there is still gravy which usually makes everything better.) I’m guessing in a lot of households, leftover potatoes like this usually sit around in the fridge and then get tossed.

What makes American Fries From Leftover Potatoes cook up so beautifully is that they’re twice baked just like the best fries are. The first bake, of course, is with the pot roast, the second in the skillet. Let me show you the two pot roasts I make most often with roasted potatoes that potentially generate a few leftovers for these beautiful, crunchy American Fries. There’s That Old Lipton’s Onion Soup Pot Roast (oven or slow cooker) and Campbells Ultimate Pot Roast (instant pot or slow cooker). You can’t go wrong with either of those super simple recipes!

This “recipe” is so simple it’s not even really a recipe! Just cut the potatoes into about 1/4 to 3/8″ slices. Add oil to skillet and then the potatoes in a single layer. You might want to use a large skillet or maybe two or pull out the ol’ electric skillet like my Mom used to do. Make sure the oil is good and hot before adding the potatoes and turn only once.

If you have more people than your leftover potatoes will feed, try microwaving a few potatoes, then let them cool, peel if you want and add them to the potatoes you do have. Or maybe you don’t have any leftover potatoes to make American Fries From Leftover Potatoes! Don’t feel sad. Just make as many potatoes as you need in the microwave or oven, then make your American Fries.

Of course, the price of your potatoes depends on what you’ve bought your potatoes for originally. Potatoes are usually cheapest when bought in the larger bags. I just spotted 10 pounds at Aldi for $3.49. And while potatoes are always available most everywhere in the States, they’re in season in late summer to early fall and at their very cheapest. (Unless there’s a great sale around a holiday when the stores want to lure you in.)

Larger bags are often a mix of different sizes. I go through the bag and set aside the larger uniform ones for baking and then use the mixed sizes and shapes in recipes like soup, pot roast, mashed potatoes or any recipe where a uniform size doesn’t matter.

Store your potatoes in a loosely closed bag away from any onions and in a cool place. It’s not unusual to see them next to my back kitchen door in the fall and winter, but in my small kitchen, I have to be creative!

Heat a skillet or griddle over medium-high heat. When hot, add oil and then the potato slices in a single layer. Cook until browned (may cook unevenly, keep checking individual potato slices) then turn and brown the second side, turning only once. Turn only once. Salt and pepper as soon as removed from the skillet and serve immediately.

If you have a favorite spice rub or blend, feel free to sprinkle that on the potatoes before or after cooking.

I’ll be sharing my American Fries From Leftover Potatoes at Fiesta Friday #243, hosted this week by Catherine @ Kunstkitchen’s Blog and Becky @ Bubbly Bee.

I’ll also be sharing at the Lazy Gastronome. Helen posts a weekly link up, What’s for Dinner?