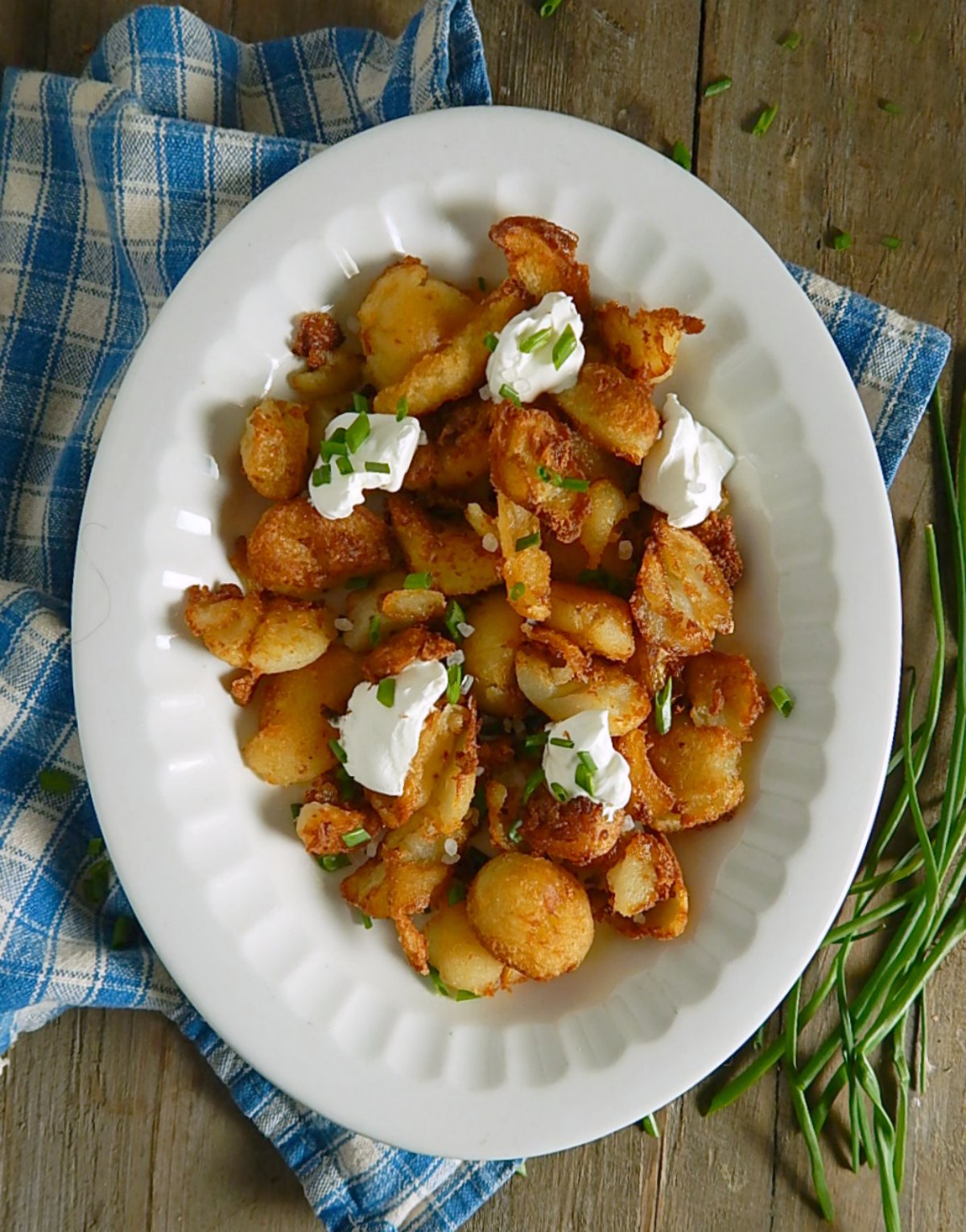 Once upon a time, I worked in a restaurant kitchen for a while when I was just a baby-faced teenager. I was in between jobs and since I had waitressed before I thought it would be a quick way to make some money – the problem was I was in Colorado and so I wasn’t legal to waitress. They took me in as a prep cook and I learned a few tricks. One of them was how to make these glorious Baked Potato Hash Browns.

Over the years, Baked Potato Hash Browns have become a staple in my kitchen. They are by far my favorite hash browns and I’m always a bit surprised when I’ve had guests that they’ve never seen hash browns prepared this way. They’re fast because they’re already cooked once and they are absolute crispy, tender wonderful things. The outside is always browned, crunchy and delish. The inside of the hash browns are just dreamy and creamy. And the best part? All the little small bits that aren’t the “perfect” size cook up beautifully crispy. They’re like a little bonus, a gift. I call them the “gremlins.” I don’t know why!

Before I had a family, I’d just make these when I had a few leftover potatoes. Then when I had kids and they had larger appetites, I’d make have to make more. Whenever I baked potatoes, I’d make extra just so I’d have extra for Baked Potato Hash Browns. The baked potatoes can sit for several days in the fridge before you use them. And once you’ve hollowed them out, don’t forget to make Potato Skins!

I love to serve my Baked Potato Hash Browns with a few dabs of sour cream, some chives or green onion sprinkled over and a good hit of salt and pepper. Yogurt can be used in place of the sour cream if you want. If I think of it and have a little cream cheese in the fridge, while the potatoes are still warm in the pan, I’ll drop tiny little pieces all over the potatoes instead of using sour cream. It’s like heaven! Some of it gets melty, a little of it is still cold and creamy and it’s such a great contrast.

Also, you’ll want to be generous with your oil so you can get that lovely, crispy exterior. The Baked Potato Hash Browns can always be drained to remove any excess oil if needed. Your results won’t be as good if you’re chintzy with that oil.

You’ll want to watch and kind of tend these as you cook them. Some of the pieces will cook faster than others, they may need to be nudged around and the smaller ones will be done and need to be removed sooner than some of the others.

Baked Potato Hash Browns, since they make use of a leftover baked potato are frugal just by nature. Don’t waste the skins, though, Potato Skins made with Leftover Baked Potatoes are a fantastic use of them!

I buy potatoes and onions in larger bags and store them apart, usually in paper grocery bags with the top folded over. With potatoes, buy the big bags if you’ll use them; they are always cheaper per pound. Since the potatoes in the larger bags are generally a variety of sizes, use the nice, large ones for bakers or when size matters and the smaller ones in recipes where it doesn’t.

If you’re using the sour cream or cream cheese as a garnish, buy them around holidays! Both have a long shelf life. Keep your sour cream covered, even if it’s sitting on the counter as you’re serving. Store it upside down in the fridge and make sure to use clean utensils. Cream cheese has a shelf life of months and can be frozen. I generally buy my yogurt in the large containers and flavor it as I eat it with fruits or jam. The price at Costco is about the same as the price at my regular grocery, but the container is a lot larger. I store the yogurt upside down, too.

Serve your Baked Potato Hash Browns for breakfast or for a side for a lunch or casual dinner.

Slice potatoes in half lengthwise. Using a small spoon, scoop out the filling, leaving a small rim of the potato along the skins. Save the skins to make potato skins.

Preheat frying pan and oil. When warm, add potato pieces, frying until golden brown. Stir now and then. Drain well on paper towels or in a large colander.