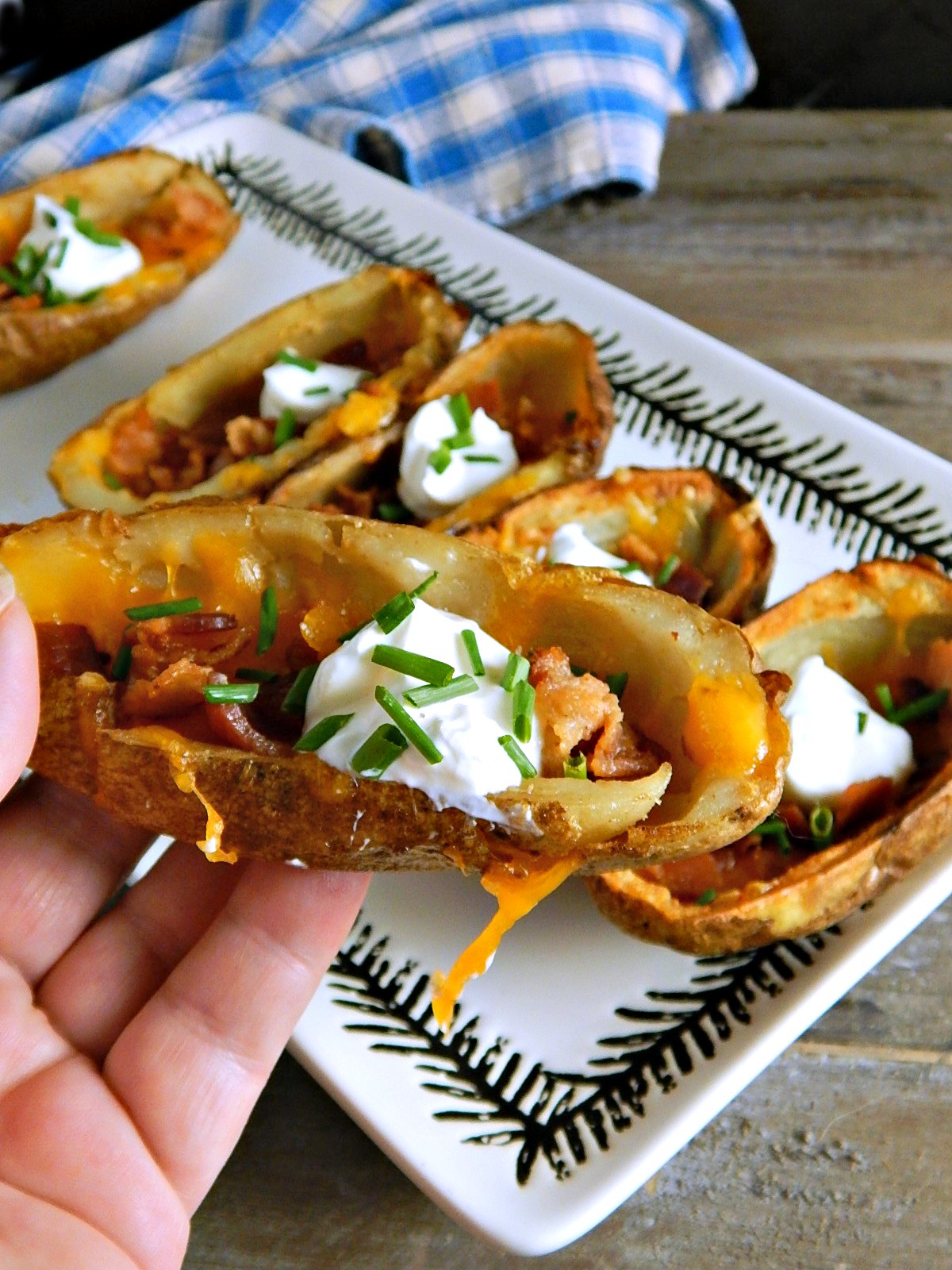 So if the main reason to have leftover baked potatoes is to make Baked Potato Hash Browns, running a close second has got to be Potato Skins made with Leftover Baked Potatoes. I can’t say which is better and luckily you don’t have to choose!

If you are going to make Bake Potato Hash Browns, you’re going to spoon out the tender, baked potato right out of the skin so you’ll have the skins left. We can’t waste those, can we? And if you’re going to make Potato Skins made with Leftover Baked Potatoes, you’ll hollow out the skins and have the bits of potatoes leftover to make the Baked Potato Hash Browns. So you see, you really can’t have one without the other! Bonus!

About Potato Skins made with Leftover Baked Potatoes:

I talked on my post for Baked Potato Hash Browns how I spent a short amount of time as a prep cook way back when. I wanted to pick up a job as a waitress, but since I had moved from Iowa (where I was of legal age) to Colorado (where I was still a minor) I worked for a couple of weeks before anyone (including me) thought about my age! I loved being a prep cook but what I didn’t love was scooping out hundreds of thousands of millions (well, it seemed like it!) baked potatoes for the house potatoes and the potato skins. I gotta tell you, the potato skins were a huge draw! They went like hotcakes.

And they’ll go like hotcakes at your house, too! They’re perfect for a game day – big trays of potato skins can be prepped ahead and baked off, for an appetizer as a dinner (let’s not think about health – ya gotta have a break every now and then and you can go easy on the cheese and use yogurt for a topping) or just an appetizer for movie night, maybe?

Classically Potato Skins made with Leftover Baked Potatoes are sprinkled with a little cheddar cheese and topped with just a bit of bacon, sour cream, and green onion, but the sky’s the limit. Fill with almost anything you’d like. Choose some of your favorite things or mimic a favorite flavor profile…Prosciutto and Parmesan? Asiago with shavings of ham? A bed of Provolone with a topping of caramelized onions? Pulled pork and pepper jack cheese? Maybe it’s because I made Reuben sandwiches the other day, but Swiss and corned beef…

There are two ways to make these Potato Skins: you can scoop out the potatoes, spritz them with a little cooking spray and broil them until the edges and center get a little crunchy and brown. Make sure the flesh of the potato left on the skin is still soft, though. They shouldn’t be crunchy all the way through. That’s the healthier way.

The other way and the better tasting way (I think) is to deep fry the hollowed out potato skin until golden brown and crunchy. Doesn’t it always figure that the best tasting method is usually the not as healthy option? But the baked ones are almost as good and not so messy, and won’t make your house smell like a fast food joint. And if you’re making Potato Skins made with Leftover Baked Potatoes for a crowd, baking them all on a sheet tray is the way to go. Make sure to line your tray with foil for easy cleanup.

Saving Money on Potato Skins made with Leftover Baked Potatoes:

Potato Skins made with Leftover Baked Potatoes since they make use of a leftover baked potato, are frugal just by nature.

I buy potatoes and onions in larger bags and store them apart, usually in paper grocery bags with the top folded over. With potatoes, buy the big bags if you’ll use them; they are always cheaper per pound. Since the potatoes in the larger bags are generally a variety of sizes, use the nice, large ones for bakers or when size matters and the smaller ones in recipes where it doesn’t.

If you’re using the sour cream as a garnish, buy it around holidays! It has a long shelf life, even opened it you keep your sour cream covered, even if it’s sitting on the counter as you’re serving. Store it upside down in the fridge and make sure to use clean utensils. Bacon is another item I try to buy on special during holidays. I just chuck it in the freezer and if I need a small amount, just cut right through the package. It only needs to sit on the counter for a very short time before it gets soft enough to cut through.

I also buy cheese on sale and really watch the specials. Grocery store cheese will last a good long time, unopened and if need be can be tossed in the freezer – it will be crumbly and not so great for eating but is still fine for cooking.

Makes 2 skins per potato. Either bake potatoes for this recipe (oven or microwave) and cool or use leftover baked potatoes.

Cut potatoes in half, lengthwise. With a spoon, scoop out most of the potato, leaving a rim of potato attached to the skin. Save the scooped out potato for another use, like Baked Potato Hash Browns.

With all skins on a tray, lined with foil for easy cleanup, place a bit of cheese inside each. Broil until cheese is melted and bubbly. Remove, sprinkle with bacon and/or chives, and serve with sour cream, yogurt and/or your favorite dipping sauce.

2 thoughts on “Potato Skins made with Leftover Baked Potatoes”