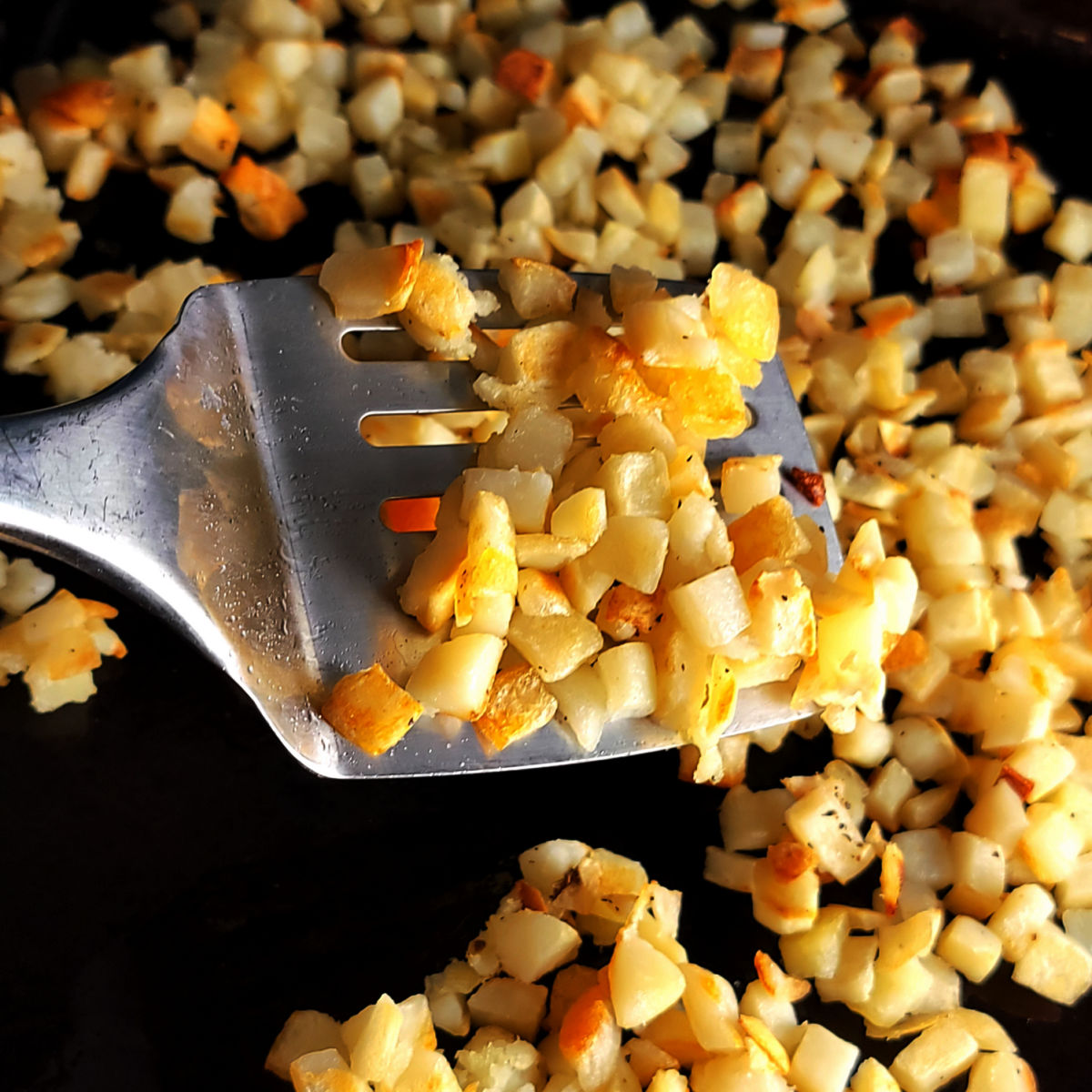 I love hash browns but hate making them! The mess, the splattering, the constant attention standing at the stove, especially when there are other things cooking makes me skip the whole hash brown thing – until now. If you’re like me, Oven Hash Browns are a game changer!

If you pull out this recipe next time you’re feeling all “brunchy” you’re gonna look like a hero when you serve up these beautifully browned crispy, crunchy on the outside, tender on the inside oven hash browns!

Hey guys, I’ve cooked frozen hash browns all my life and I gotta tell you that these are absolutely no fuss, no mess but most of all so much better than anything I’ve ever turned out of my cast iron (or other) skillet. These beautifully browned Oven Hash Browns are amazing.

They’re a minor miracle – and don’t we all need those these days! Best of all, you can make these at the same time you make my Buffet Style Oven Baked Bacon! I normally cook that at 400 degrees F. but if you watch them closely they can go in at 425, too. Just place them on the top shelf and your potatoes on the bottom.

I do want to note that these Oven Hash Browns are made with the frozen cubes. I haven’t tried or tested the shredded hash browns, or any of the refrigerated ones. I have tried starting with fresh potatoes, but that method (for me) is not quite perfect, yet! Coming soon, I promise!

When making any hash browns I think a lot of us want to skimp on the amount of oil. Don’t do that! Whether in a skillet or in the oven, you’re going to need more than you think. That’s what makes them cook and brown beautifully and taste amazing. Trust in the process! Don’t crowd the potatoes and don’t add to the oven until the oven is fully preheated. Know that a darker pan will aid in browning.

Watch your potatoes closely the first time. Oven temperatures and the way your oven heats can vary and that can change up the timing. Jot down how many minutes before you had to stir and turn and how many more minutes until done so you’ll have the timing down for your oven next time!

I like my hash browns with just salt and pepper, although sometimes I’ll pull out my Homemade Seasoning Salt. Every now and then, I’ll go for some Potatoes O’Briens.

Just know that anything you do with yours in a skillet will usually work on a sheet pan. Be a little careful about adding too many ingredients that might give off a lot of moisture, but other than that, go ahead and use your favorite seasonings, add-ins, or do whatever special touches you like to do!

What to do with Leftovers:

Let’s face it, leftover hash browns (although that hardly ever happens at my place) are lackluster. They can be stored for about two days before that “old” potato flavor sets in. I do think reheating in a skillet works better than a microwave.

Look for your hash browns on sale. The stores will often have great deals (sometimes with store or producer’s coupons), especially around holidays.

I take special note to check for sales around any brunch holidays like Easter or Mother’s day. Check out my post on Winning at the Grocer for links to what will probably be on sale before the major holidays. Stock the freezer at sale prices if this is a product you use regularly.

Chance & I are “Chillin” on the lower right! Such a proud Mommy moment!

Is there a rule that says Easter should always be cold, damp, and dreary? Even here in Georgia? I know Spring Showers bring May Flowers but enough already! Of course, food always cheers me up, and so does my scoundrel of a dog, Chance!

Check it out, here in Georgia, we’re at a follow-up training for Chance at the fun Halcyon Multi-Use space. And of course, a special shout out to Sit Means Sit training! They rock! Note: I am wearing boots, my cuddle duds, sweats, a winter jacket, and gloves! Chance of course is in his fur coat. Don’t tell Peta! That’s us in the bottom right!

Take care all, and Happy Easter if you celebrate!

Add hash browns to large, rimmed sheet tray; the tray needs to be large enough so the hashbrowns are in a single layer with some space in between each piece of potato. Toss with oil. Add salt and pepper to taste and toss again. Spread across pan.