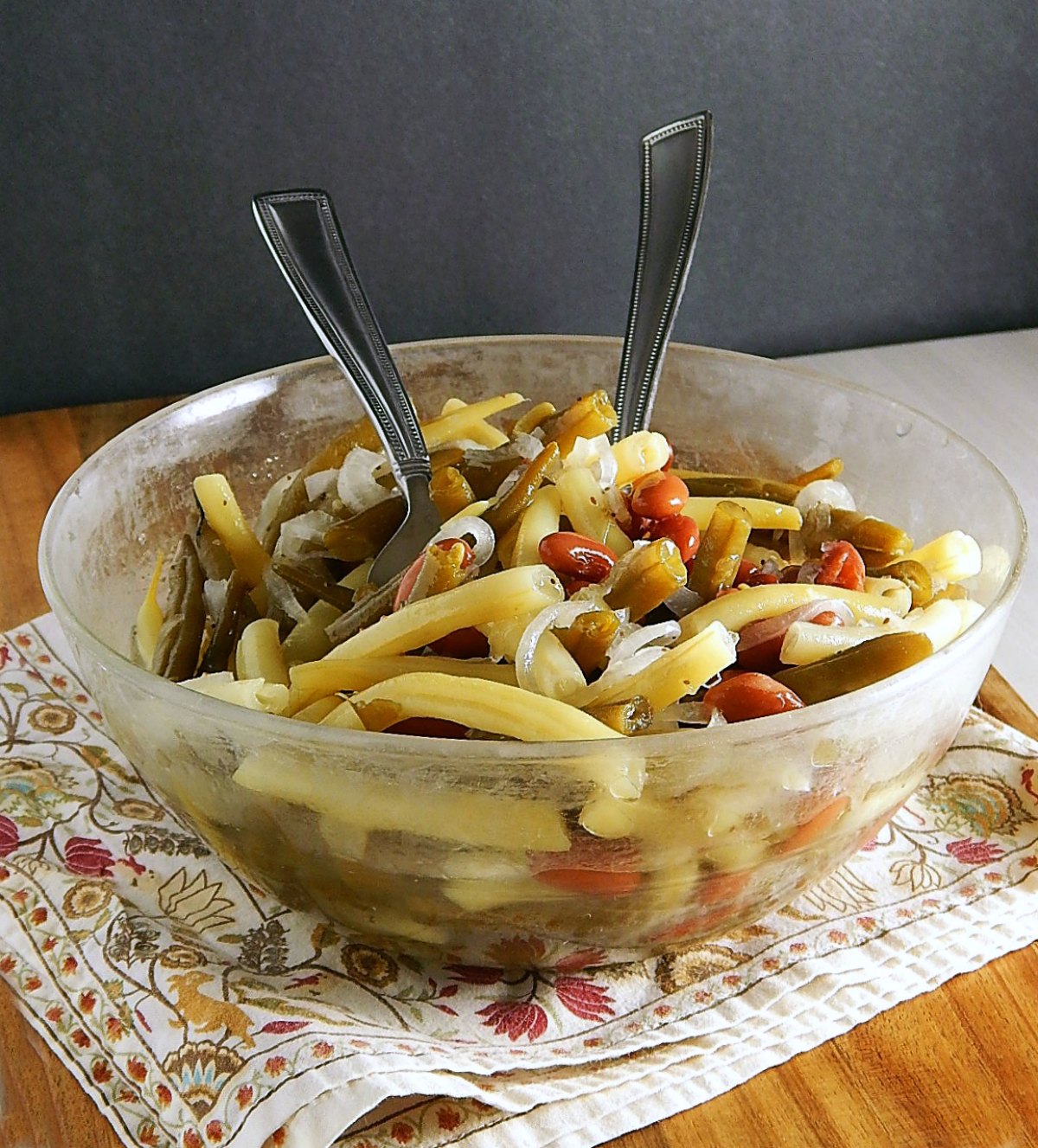 I grew up on Old Fashioned Three Bean Salad and if you’re from the Midwest, I bet you did, too! There’s just nothing like fresh garden beans soaking up all the sweet, tangy marinade!

It’s a perfect summer salad for a potluck or to have on hand to fill out dinners or lunches. On a hot day, Old Fashioned Three Bean Salad is so cool and refreshing!

The traditional blend of beans for this salad is the pale wax bean, green beans, and kidney beans. I felt like I lucked out when I stopped at the farmer’s market last week and saw wax beans, so I knew at once what I had to do with them! If you can’t find wax beans for this salad, it’s still perfectly good with just green beans and if you want, you can use a can of wax beans. Not my first choice, but strangely enough, wax beans in a can really are pretty good. And they’ll be soaking up your marinade, so if you give them a rinse before adding them, I’m guessing only you will know.

The kidney bean has never been a favorite of mine. I actually go so far as to leave them out of my Chili when I make it. But it really is the classic bean for an Old Fashioned Three Bean Salad and really is good in there. I just eat them first, lol, so I can finish with the part of the salad I like best. The World’s Healthiest Food has a lot of good things to say about the Kidney Bean. They have a lot of good to say about the Chickpea, too, if you’re looking for a substitute. Even I like the Chickpea in my Old Fashioned Three Bean Salad, although it IS a bit of a departure. As long as we’re talking health, here’s WHF’s link for the Green Bean, too.

Whenever I make a recipe, whether it’s one I’ve pulled from my old recipe box like this one or a newer recipe, I’m always checking out what are people are doing. I guess it’s part of my obsessiveness over recipes, and always wanting to have the best of whatever I’m eating! And sometimes, yes, I find twists or hints that I love and try to incorporate into my dish. I was a little surprised at all the variations I found for Three Bean Salad. And who knows, maybe I’ll add some cilantro or turmeric or wine or flavored vinegar, maybe red onion or any of the trendier possibilities sometime in a future Three Bean Salad, but today, I just wanted to stick to the old, familiar flavors of this German standard.

Old Fashioned Three Bean Salad just couldn’t be easier to make. You just mix the marinade ingredients and pour them over the veggies awaiting in the bowl. The hard part is waiting for it because it really is best if it sits overnight and is served the next day. If you can’t wait that long, at least give it an hour or two and you might want to slightly heat the vinegar & oil so it dissolves the sugar more quickly. Careful, though, don’t boil it or you’ll need to air out your kitchen of all the fumes!

I do like making this salad best in the summer with fresh beans. I just put them in a skillet with a bit of water & salt, cover, bring to a good simmer and kind of half cook, half steam them. Watch the water level and don’t overcook. The beans should be just what’s called tender/crisp. Then drain them and “shock” them in cold water.  When the beans sit in the marinade, they do lose their gorgeous, bright green color, but that’s of little matter because they pick up all that gorgeous flavor as a trade-off.

While I don’t mind using canned wax beans in a pinch in my Old Fashioned Three Bean Salad, I do have a bit of a problem with the canned green beans. Do try to use fresh green beans if you can. The texture is just so much better. I also generally use canned Kidney Beans, well rinsed, mostly because, as I mentioned, I’m not all that fond of kidney beans so I can’t see cooking up a bag of them and stashing the excess in the freezer like I do with most dried beans. But that’s just me, and now that I’ve read what the World’s Healthies Food says about kidney beans, maybe I will make them more often and make an effort to learn to like them – the key take away for me is that they’re good for memory, and goodness knows I could use that!

Just a quick mention on the onion. The plain old white onion is traditional, but I’m sure that Three Bean Salad would be good with either Vidalia or Red Onion, too, and I don’t think either would skew the salad enough so it still wouldn’t be that good Old Fashioned Three Bean Salad. For the best salad, thinly slice the onions – very thinly, so they’re almost shaved. It does make a difference in the overall taste.

Of course, watch for sales on the green beans and make the salad, rather than just making it at a whim. This is the perfect salad to make when you have a lot of green beans because once made, it keeps for a good week in the fridge, just getting better and better. With all that vinegar, it’s practically a pickle, though we don’t usually think of it as such. If you’ve ever overbought on green beans or it becomes obvious you’re not going to get to yours in time (green beans do NOT keep long once you get them home) keep this recipe in mind. And do stop by your farmer’s market when you have a chance. The prices can be pretty good, especially if you can keep yourself from getting carried away. Hint: I can’t!!

And of course, if you do make your kidney beans from dried beans, you’ll save about a third of the cost of buying canned kidney bean. As mentioned above, cooked beans can be easily divided up into packages (I usually go for about 1 1/2 cups, roughly how much is in a can) and frozen. Add in some of the cooking liquid and they keep their integrity better.

Vinegar is best bought around Easter when vinegar of all kinds are on sale. Sugar and other baking products are often on sale during holidays, especially holidays known for baking, like Thanksgiving, Christmas, Valentine’s Day and Easter.

If you’d like to look at some of my other salads, here’s my main salad menu: Salads, Dressings & Extras.

Cook beans to tender/crisp: Add beans to large skillet or Dutch oven. Add about 1 cup water and desired amount of salt. Bring to a boil, cover and reduce to a simmer. Cook four to five minutes until tender/crips. Drain and plunge into a bowl of cold water. Drain when cool.

Add the vinegar, oil, sugar, salt and celery seed to a large bowl. Whisk to mix and dissolve sugar (the sugar doesn’t need to be completely dissolved.) Taste and adjust, adding more vinegar or sugar or salt as desired. The dressing should be both sweet and tart and well seasoned with salt.

Add the green, wax and kidney beans along with the onion. Stir to coat. Cover and refrigerate, preferably overnight to serve the next day. Stir occasionally if time permits.

I’ll be sharing my Old Fashioned Three Bean Salad at Fiesta Friday #239, hosted this week by Antonia @ Zoale.com and Lathi @ From Lathi’s Kitchen