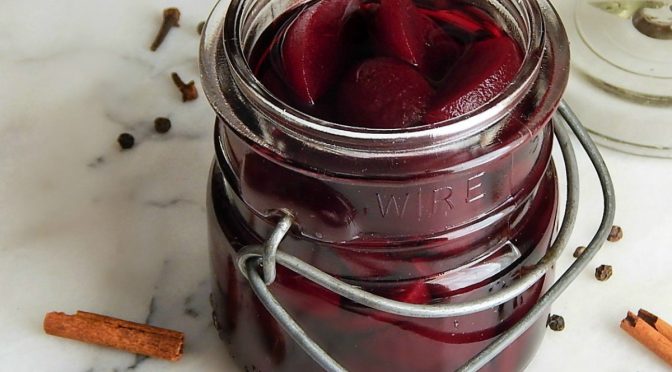 My Grandma’s Refrigerator Pickled Beets are a simple, classic pickled beet that makes just enough to fill a jar or two, depending on the size of the jar. Because Grandma’s Refrigerator Pickled Beets are so easy, you can just knock them out when you have a few minutes and there’s no compelling reason to make a bunch. You can pretty much just have them whenever you want them, especially these days when beets are available all year ’round.

Quick refrigerator pickles like My Grandma’s Refrigerator Pickled Beets are a bit different than formal canning recipes to “put up” beets. For one thing, they’re stored in the refrigerator (obvs) and they aren’t processed in a boiling water bath for safe storage at room temperature. If you’d like to see how to go through that process, I can’t recommend a better site than the National Center for Home Preservation, although any reliable canning site is likely to have a larger batch recipe for preserving.

You might have guessed by the name, Grandma’s Refrigerator Pickled Beets, that this is the recipe my Grandma, Irene, used, my Mom, Kay, used and now I use. There’s nothing too exotic here, just a beautifully flavored brine that turns into the loveliest color when combined with the beets. The beets, in turn, pick up all the flavor from the spices in that brine.

Besides just eating Grandma’s Refrigerator Pickled Beets, or serving them as a tangy side for something rich, I love using pickled beets in salads. And some of my favorite salads have pickled beets. For one, there’s this Irish Pub Salad which is full of all kinds of beautiful things and then there’s my Beet Goes on Salad.  I couldn’t help myself on that name, lol! Btw, the Honey Citrus Vinaigrette in the Beet Goes on Salad? I swear it’s so good you’ll practically want to drink it! Maybe even splash a little on your wrists and behind your ears! I use it a lot.

Making refrigerator pickles of almost any kind is really a simple process. You’ll prepare the vegetables (or sometimes fruit) by washing if raw, blanching (dropping for a minute or two in boiling water) or cooking (usually by boiling or in this case of these beets, roasting) and placing them, along with any herbs, spices or aromatics, into sterilized or fresh and preferably hot from the dishwasher jars.

Then you’ll mix up a simple brine (the mixture of vinegar, water, sugar) and heat it to boiling. That super-hot liquid gets poured over your veggies, in this case, beets. On goes the lid and they get stored in the fridge where they will keep, literally, for weeks. If they last that long.

When you make Grandma’s Refrigerator Pickled Beets, you will want to make sure all the beets are covered, not sticking above the brine. I just wanted to make sure you could see at least a little of the beets when I took the pictures for this post.

Now, Mom and Grandma both boiled their beets; I don’t know if either of them had ever heard of roasting beets like we so commonly do these days. I think roasting helps preserve all the flavor and the color of the beets. There’s really nothing to it.

To roast beets, wash, remove greens right above the beets, and leave the root end intact. Place on a sheet of foil and wrap well, closing at the top. Place on a pan (just in case they leak) and roast in a 350 degree F. oven for about an hour. Open package carefully, let cool. Slip off skin with a vegetable peeler or paring knife and slice or chunk as desired for this recipe.

Look for beets in season for the best pricing and don’t be dismayed by the condition of the tops if they aren’t in good shape. The leaves are often unattractive. I don’t waste them, though, if they can be saved. Wash them and use them in salads, smoothies (like my Big, Fat Green Smoothie) or in pesto. They are just as good for you as the beets themselves.

Beets are a favorite of mine, particularly pickled, and I did a pretty comprehensive write up on them that includes shopping for, storing, cooking and nutrition, if you’d like to take a peek. It’s called What to Know About Beets. Beets have lately become a nutritional darling; see what the World’s Healthiest Foods has to say about the Beet.

I often pickle beets, and sometimes other veggies, when I’ve bought too many (I always have good intentions) to eat or use, or time is starting to run out on some of those in my fridge. You do always want to use sound vegetables when pickling but it can be a great save and buy you some time on them, thereby saving you a little cash. If you’d like to see a few other things I’ve pickled, check out Pickles and Related Items at the bottom of the page; just click on any of the photos to take you to the corresponding page.

Bring all ingredients except beets to a boil in a 2- to 3-quart saucepan, stirring until sugar is dissolved. Cover and simmer a few minutes.

Add beets to a very clean or sterilized jar, pour the hot brine over. Cool to room temperature, cover and refrigerate.

Keeps six to eight weeks in the fridge.

If you are pickling to can and store, there is a whole different process. This is for the refrigerator, only.

When the beets are gone, the brine can be brought back up to a boil and reused for another batch. It just gets better and better.

I’ll be sharing Grandma’s Refrigerator Pickled Beets at Fiesta Friday #219, hosted this week by Jhuls at the Not So Creative Cook. Do stop by their sites when you have a minute – Fiesta Friday is a fun link up from some of the best bloggers and you’re going to fall in love with Juhl’s site!