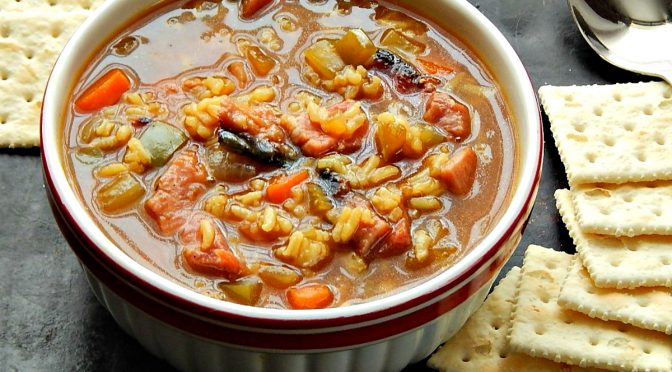 I’m still working on a few Ham leftovers, leftovers from Easter, how about you? One thing I love to do is make soup with my ham bone and some of my ham. This year I made a Honey Glazed Cajun Spiced Ham, and those Cajun flavors are pretty specific. I knew some of that would transfer to whatever soup I was making, so I thought I would capitalize on that. I knew that this Cajun Ham & Rice Soup would bring those flavors home.

You don’t have to have a Honey Glazed Cajun Spiced Ham to make this soup, though. It will be just as delish with any ham; using the Cajun Ham along with the Cajun Spices in the soup just amps the flavor up a notch.

Cajun Ham & Rice Soup is a fantastic melange of flavors, from the flavorful stock (I made mine from my Honey Glazed Cajun Spiced Ham so it already had some of the flavors) enhanced with just a little Cajun Spice (that link goes to my homemade version) to the hearty & healthy veggies. There’s some rice, too, one of the things I associate with so many of the Cajun dishes, and that makes this a kind of heartwarming, stick to your ribs recipe. It’s really a meal in a bowl and this is truly one of my favorite soups. Shhhh, though, don’t tell any of my other soups! Just discretely check the links at the bottom of the page.

And while I love the Cajun Spices, I made sure to carry more of that Cajun flavor home by using the Classic New Orlean’s Trinity in this soup: that’s the combo of bell peppers, onion, and celery that are the basis of so many Cajun dishes. And I added in a few carrots, for color and because well…I love me some carrots! I think the slightly sweet flavor of carrot goes so well with this spicy soup.

Speaking of spicy, feel free to add more or less of the Cajun spices to the soup. One and a half teaspoons just gives the soup a bit of flavor, a tablespoon, to me, is spicy, but not blow your mind spicy. Judge accordingly and you can always add more but it’s hard to take away, amirite!?

As far as the stock for Cajun Ham & Rice Soup, If you have ham stock made, you’re home free. If not, I have a recipe you can make with your ham bone on my post for Best Ham Stock, Instant Pot or Not. You can also pick up ham broth at the store (sometimes it’s harder to find) or use chicken stock, homemade or store-bought.

As far as the rice, even though it’s an extra little step, try cooking the rice in another pot and giving it a little rinse before you add it to your soup. It behaves in the soup – you won’t have a thick starchy mess that seems to dull down the flavor and suck up all broth. The rice can be cooking along as the soup simmers so there’s no time lost.

Your best bet for saving money on this soup is to use the bone leftover from any Holiday Ham, bought on sale, and make your own stock. There’s always enough meat for a little soup clinging to the bone and that stock will have amazing flavor at a budget price. I like to maximize the use of my ham bone and instead of making one soup with it, make the stock and divide that stock up for more than one soup.

Generally, rice in the larger bags is less per pound & it’s hard to beat the price at Aldi. If you don’t have Aldi nearby, check your rice area in the store, but check out & compare rice in the Mexican, Indian or Asian aisles, too. Rice is often at a low in the fall, and often on sale around holidays.

As far as the veggies, carrots, celery, and onions are always cheap, especially if bought in larger bags. Bell peppers can be pretty pricey, especially through the winter, but keep well. Buy several when you see them on sale so you’ll have them for the current week and the week after.

A beautiful melange of flavors.

Heat the vegetable oil in a 3-quart saucepan over medium heat.  Add the onions & carrots to the saucepan and cook, stirring occasionally, for about 5 minutes, or until tender. Add the celery and bell pepper and cook for 2 to 3 minutes. Stir in the Cajun Seasoning and cook one minute longer.

Add the ham stock and ham to the vegetable mixture and simmer for 15 to 20 minutes until vegetables are tender. Stir in the rice, heat through. Taste for salt and add if needed. Stir in vinegar and serve.

I’ll be sharing Shaved Asparagus Salad with Lemon Dijon Vinaigrette at Fiesta Friday # 218 hosted this week by Ginger @ Ginger & Bread and Julianna @ Foodie on Board.