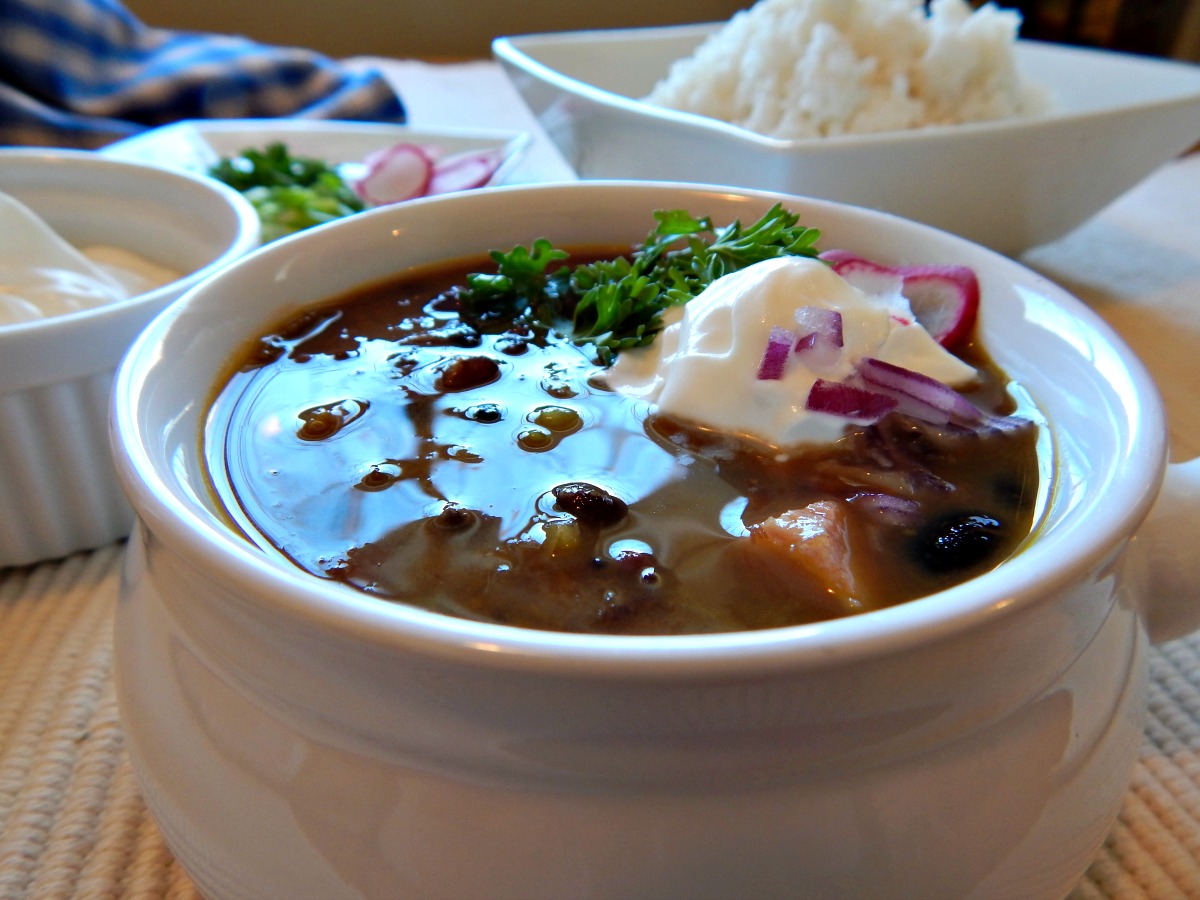 This is really a classic Cuban Black Bean Soup, at least how we make it here in the US.; I’ve never had it in Cuba. It’s got to be hands down one of my favorite soups; it has those glorious black beans, the smoky ham, the rich homemade broth, the indescribable warmth of the cumin. It’s a marvelous blend of flavors.

Most Soups Freeze like a Dream. including this Cuban Black Bean Soup

I’m not alone in my love for this soup; even after the leftovers are put away, it’s one soup at our house that generates a lot of activity in the kitchen – after I’m in bed I’ll hear the refrigerator door open, then the pip, pip, pip of the microwave as my son heats up a bowl. That’s not a problem, though, because I usually double this soup, and sometimes triple it, just to have enough for a few days and extra to freeze.

If you like Black Bean Soup, I think you’re going to love this Cuban version as much as we do. It’s practically addictive. Classically, this soup is served with a scoop of white rice in a bowl, the soup poured around. I love it like that but I also think it’s great with a dollop of sour cream instead.

Either way, I like to garnish with a sprinkle of very finely diced red onion and maybe some cilantro. There’s just something about the fresh bite of the red onion that’s a little magical in this soup. And if straight up raw red onion is too much for you, slice your red onion and soak it in water for about 10 minutes. It takes the bite away. Or maybe a little Pickled Red Onion will do it for you. Of course, maybe you might want a little lime or hot sauce. You can’t go wrong with either.

At our house, a big, hearty soup like this, especially served with rice, qualifies as a meal in itself. You can’t go wrong with adding a little bread if you lean that way or serving with a sandwich, maybe a Cubano? And of course, this soup could always be used as a “starter” for any Cuban meal.

The cooking time on home-made soups and broths can seem long and tedious. I break things up, and make the broth first, with the leftover ham bone, then portion and freeze it. I usually reduce it and add a little ham to it and freeze it. Usually, I can make two soups with my leftover ham bone. Bonus, right? See the recipe for Best Ham Stock, Instant Pot or Stovetop where I detail out the process. Then when I’m ready to make any type of ham soup, the broth and ham are at the ready and cooking this way knocks hours of the cooking time.

Usually, I soak or brine most beans for 12 hours or overnight. Black beans are one exception; they’re softer than most beans and can start to split if they take on too much moisture during soaking. I don’t usually soak black beans for more than five or six hours, although it’s not the end of the world or anything if they do go longer. See Brining and Soaking Beans for more information on the process or just follow the steps in the recipe.

There’s a good bit of chopping when making this soup so you might want to pull out the food processor. I’ve used bell peppers but if you have access to Cubano peppers in your area, use them. If you’d like a little heat, put a slit or two in a  whole jalapeno or Serrano pepper and drop it in the soup. When fished out at the end it makes a nice treat for whoever likes a bit of heat.

While Cuban Black Bean Soup can be made by simmering a ham bone with the beans, I usually find if I make Ham Stock by itself, I can usually get more than one soup out of my ham bone. So if you’re frugal like I am, make the ham stock and use part of the meat from the bone and part of the stock for the soup and use the rest for something else. You can make my Best Ham Stock on the stove or in the instant pot.

It might seem a bit cliche for a frugal blog to feature bean recipes – but recipes like this Cuban Black Bean Soup are really are a cheap way to fill you up and a great source of protein. See what the World’s Healthiest Foods has to say about the black bean; it might surprise you! Rinsing and brining or soaking does help with some of the known issues with beans, but the best defense? Eating them regularly. Unless you have special issues, your body will adjust.

The only real pricey item in Cuban Black Bean Soup is the bell peppers. Plain old green bell peppers are called for in this recipe and bonus: they’re always less expensive than the colored bells. Check Aldi or your buyer’s club or watch for sales on the peppers to bring this recipe in at a budget. Whenever bell peppers are on sale, I’ll pick some up for the current week and the next since they last well for a week or two. Onions & carrots are best bought in larger bags; they’ll be less per pound and both keep well. Beans are generally on sale after any holidays in which ham is traditionally served. They’re often unadvertised so just take a peek down the aisle.

A delectable classic made from scratch Cuban Bean Soup. Serve with rice and garnish with sour cream and red onion.

Spread out beans on a pan and sort, discarding any stones or foreign objects. Rinse, then cover with 2 inches of water, bring to a boil and soak for one hour up to five. (The longer you soak, the shorter the cooking time, but a full overnight soak tends to split the beans – if overnight’s easier, go for it.)

In the Dutch oven, add beans, stock, garlic, vegetables, bay leaves, oregano, cumin, and pepper. Bring to a boil, turn down and simmer gently, with lid askew, until beans are tender, but not falling apart, about 45 minutes to an hour, depending on the age of the beans and how long they’ve soaked. Add more water if necessary at any point.

When the beans are fully cooked, add the ham and heat through, then add vinegar, salt to taste and olive oil. Serve over rice (use about a 1/2 cup per of rice per person) and garnish as desired.

Notes: If the beans are old, they may take much, much longer to cook, in which case start them out before adding any vegetables, cook until they are mostly tender, then proceed with the rest of the recipe. Extra water may need to be added.