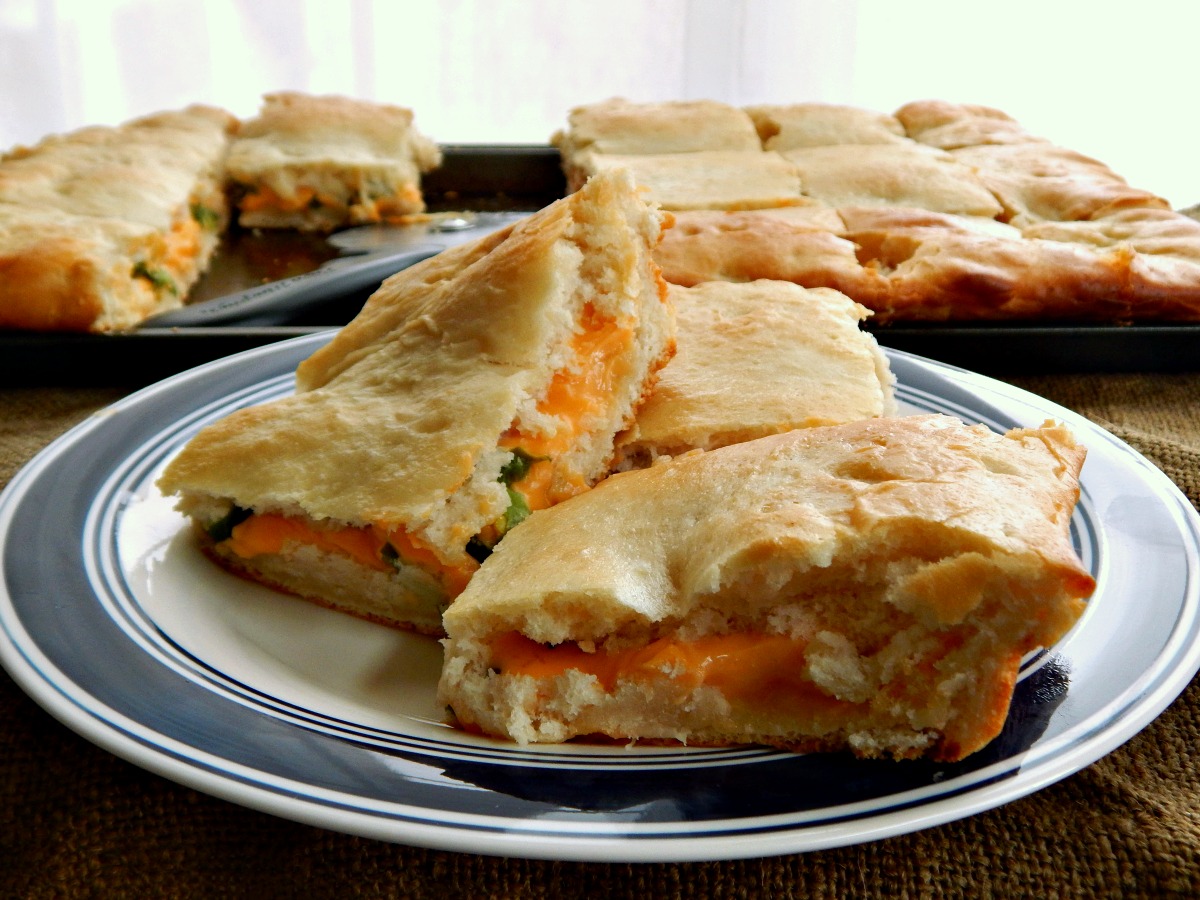 The last time I made Original Cheese Zombie Sandwiches, I made 1/3 plain cheese, 1/3 with pickled Jalapenos and 1/3 with ham. The possibilities are endless.

The Original Cheese Zombie Sandwiches are the kind of nostalgic down-home recipe that by all rights should be awful yet somehow is a magical alchemy of oooey, gooey deliciousness. That suspicious orange cheese melds right into the home-made bread…and that homemade bread is just a beautiful thing, all soft, pillowy and warm, and oh my gosh are these Cheese Zombies good.

And while they may not be considered “gourmet” good, I think many of us can relate to this: Original Cheese Zombie Sandwiches are ballpark hot dogs good. Theater popcorn good. Fried cheese-curds at the fair good. They’re gas station nachos at 2:00 a.m. after the bar closes good. Hey, I’m not admitting anything and that was way over 25 years ago!

For many, it seems the Original Cheese Zombie Sandwiches are the ultimate comfort food, maybe in the way that comfort food relates to childhood memories.

The Original Cheese Zombie Sandwiches seems to have its origins in hot lunches made from an excess of government cheese available to the school’s hot lunch programs, way back in the day. They’re particular to areas along the west coast, mostly in California but extending north into Oregon. And believe me, the Cheese Zombie is much beloved by those privileged enough to be served these sandwiches for hot lunch. Just google it!

The last time I made Original Cheese Zombie Sandwiches, I made 1/3 plain cheese, 1/3 with pickled Jalapenos and 1/3 with ham. The possibilities are endless.

History of the Original Cheese Zombie:

I suspect The Original Cheese Zombie Sandwiches have roots in the Bierock or Runza shown in the photo, below. The dough and the concept seem quite similar, even though whatever lunch lady first made these may have taken liberties in making one huge pan rather than individual rolls. That being said, I recently came across some Russian posts with pans of filled bread that looked a lot like these, made with all kinds of fillings, not just cheese, proving again, there’s nothing new in the world, lol!

And who knows, just maybe that same lunch lady may have taken liberties with the Runza name and morphed it to Zombie to intrigue the hot lunch crowd. Patty’s Original Cheese Zombie makes individual Zombies that really look a LOT like an individual home-made Runza or Bierock. Anyhoo, that’s my theory and I’m sticking to it, although we may never know the full truth!

Freshly Baked Runza – you can’t imagine how good they smell!

The recipes floating around for the Original Cheese Zombie Sandwiches are obviously cut back from a larger one & have odd measurements. I modified slightly to conform to the amount of yeast in one packet. I fiddled a bit & updated the process. The yeast is added first, then the sugar, oil and powdered milk so the milk will dissolve. Last of all the flour and salt (which can retard the yeast if added too soon) are mixed in. If you don’t have a thermometer (they’re really inexpensive these days) put a dab of the water on the inside of your wrists. It should feel close in temperature and only very slightly warm.

For best results, use powdered milk and add after the yeast has proofed (sat until bubbly) for a few minutes. There are long and complicated scientific reasons that I can never explain, and much discussion of why powdered milk does or doesn’t work better than just plain old milk. The powdered milk makes the dough softer and helps it brown to the beautiful golden color and in this recipe, the amount of dry powdered milk is a higher concentration than plain old milk will give if substituted for the water. If you do have to use regular milk, scald it (heat until a few tiny bubbles are forming at the pan’s edges) and cool it to 110 degrees before using.

The Cheese Zombie is an ideal medium for all kinds of add-ins and changeups. I’ve used Velveeta which is readily available but the standard “American Cheese” found in delis might be closer to the original. There is a difference between the very melty Velveeta and a deli type “American” cheese, which isn’t quite so plasticky. Some say the Costco Kirkland Cheese is very close to the taste of the government cheese. But why not make it your own and add in whatever kind of cheese you’d like? And while you’re at it, any additions you’d like? I used some of my leftover Not Your Father’s Root Beer & Bourbon Glazed Ham for some of these and added pickled Jalapeno to some, too.

The Original Zombie Sandwich, by the way, is my answer to National Grilled Cheese Day, which was on April 12th. Missed it again, darn it all!! And while we loved the Original Cheese Zombie Sandwiches for lunch, we’ve also started eating variations of the Zombie for breakfast sandwiches. Just freeze slices and once frozen add them to a Ziploc. Come breakfast time, wrap a Zombie in a napkin or paper towel and then heat in the microwave. Reheating instructions are in the recipe.

In a large mixing bowl, mix yeast with water, let sit five minutes until it begins to get bubbly. Add the sugar, oil and powdered milk and mix on low with a paddle attachment.

Divide into 2 equal parts, form each into a ball. Place each in a bowl sprayed with cooking spray or coated with oil, smooth side down, turning the smooth side back up (so it is covered with a light coating of the oil). Cover the bowl with plastic wrap and let rise in warm place for an hour or so until doubled in size. When risen, save the plastic wrap to cover the tray of Zombies while it rises.

On a lightly sprayed or oiled half sheet pan (17 x 12 x 1), stretch one ball of dough evenly to the edges and slightly above. Top with sliced cheese and any other filling if using. Take the second ball and stretch it out on a counter next to the tray so it is a rectangle several inches smaller than the tray.

Pick it up (it will hopefully just stretch to about the size of the tray as you do so) and place over the top of the cheese. Gently, trying not to disturb the cheese, stretch and pinch the edges of the top layer to the bottom, sealing well.

Cover lightly with plastic wrap and let rest until doubled in size, about 30 minutes to an hour. Bake 18-20 minutes at 400 degrees until the top is golden brown, rotating the tray about 3/4’s way through.

I’ll be sharing this post at Angie’s Fiesta Friday! I see some truly marvelous posts from other food bloggers there already!!