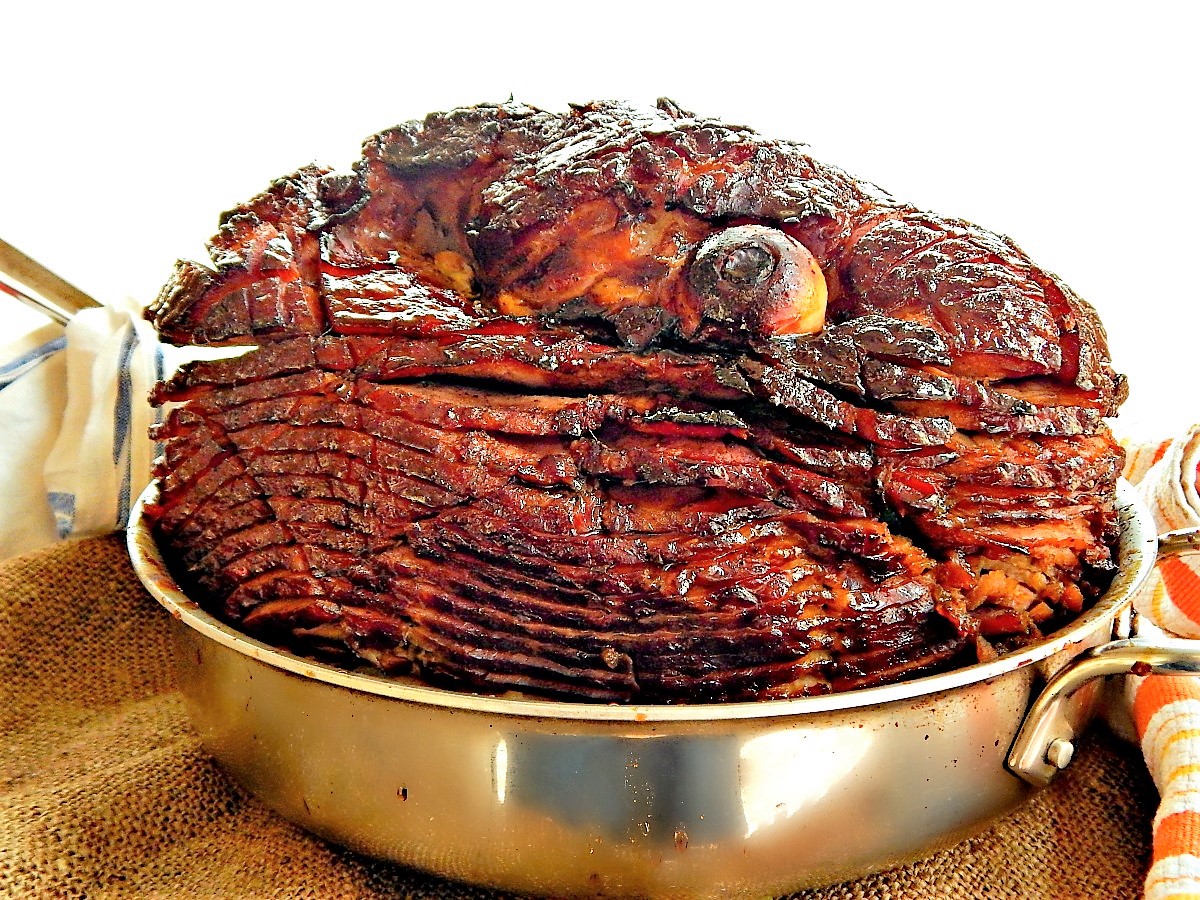 Of course, if you’re not into alcohol, you can make Not Your Father’s Root Beer & Bourbon Glazed Ham without the hooch. Just use regular root beer & leave out the Bourbon. Normally, I’m not a huge fan of glazed hams but this one is the bomb!

About Not Your Father’s Root Beer & Bourbon Glazed Ham:

Sometimes glazed hams are just too sticky sweet for me, but not this one. It’s barely sweet, a little smoky and has just a touch of zingy flavor. The Not Your Father’s Root Beer & Bourbon glaze just coats and melds into that ham leaving it incredibly juicy with those slightly chewy edges that are the hallmark of a good glazed ham. Those glazed edges are, dare I say it? Pig candy!

So yeah, there’s some sweetness, but it’s offset by zippy Coleman’s mustard, the bourbon which gives it an earthy note, the vinegar for a little zing and the slightest touch of chili powder – just a touch for interest. It’s not hot, it’s just a little “perky.” That’s my best description! The ham came out a gorgeous mahogany, and it was all I could do to stop myself from snitching a little from the edges as I was taking pics.

Speaking of pics, the fam was clamoring and I only had time for a shot or two before it had to be sliced and served…it should rest a bit anyway before it gets torn into, but try telling that to a couple of hunger-crazed octogenarians…I will make this again and I promise to try to make it look as good as it tastes!

Not Your Father’s Root Beer, photo from Small Town Brewery

Part of the reason I’m not super keen about so many glazed hams (besides that some are so sweet) is that I like to make soup with my leftover ham bone and the drippings, and sometimes those glazes hijack the flavor of the lovely ham juices.

This ham is an exception because the Not Your Father’s Root Beer & Bourbon glaze is amazing AND I’ve found a way to keep that resulting ham broth fairly neutral in flavor. I’ve added that technique to the recipe, just in case that matters to you.

Basically, all I do is cook the ham on a rack so it’s easy to remove the ham and pour out any juices from the pan before I glaze it. Then I add the ham back to the oven with a cup of water to keep the ham moist and keep the glaze from dripping and getting burnt on the pan during the final cooking with the glaze. Easy peasy and I wish I would have thought of that years ago!

Note: This recipe uses Sweet Sorghum, a light sweet syrup made from the Sorghum plant. I’ve bought it in Sioux Falls so I’m guessing it may be available throughout the country. I do have substitutes in the recipe if you can’t find it, but if you do, I have several recipes on the site that use sorghum. Just follow the tags at the bottom of the post. If you have leftover glaze, give it a boil and use it on chicken wings. If your ham already comes with a glaze, that will work with wings, too.

Ham is one item that often goes on sale, especially around any holiday – I usually don’t do a spiral-sliced (they’re pricier – but I picked this one up on a super sale after Christmas) and I generally like the shank end; though it looks like less meat, the bone makes up for it by making an amazing broth for some of my favorite Soups. If you’re interested in taking that bone and making an amazing stock in your Instant Pot or on the stove, check out my post for Best Ham Stock. Make a big pot of stock and you can make a couple of soups!

It’s very worthwhile to pick up hams around holidays like Thanksgiving, Christmas, and Easter and chuck them in your freezer. Honestly, the cost of a sales priced holiday ham can be as low as 69 cents a pound in our area. That means an 8 to 12 pounder runs between $5.52 to $8.28. A teensy tiny cheap little ham can be twice as much other times of the year. I’ve seen a ham steak less than 1/2″ thick at the grocery store during the summer for less than half a ham bought during a holiday sale.

Even though a ham costs a bit of money in initial outlay, it can make several meals (See my 12 Days of Ham) so I’ll tag this as a Bargain Meal of the Week. I’ll be throwing down my Ham & Parmesan Risotto as a secondary meal and tossing some into my Original Cheese Zombies.

Figure out how long it will take to cook the ham to 140 degrees F. & glaze it:

Score the ham in a diamond pattern, slicing about 1/4 inch deep and making parallel lines about an inch apart. Place a rack in a pan just large enough to hold the ham. Place ham, cut side down on rack. Add 1/3 cup of water to the pan, cover tightly (you may need to use foil) and place in oven.

As soon as the ham goes in or at least far enough in advance, make the glaze so the glaze has time to cool: In a medium saucepan, add mustard, clove, chili, salt, pepper and brown sugar. Stir together. Slowly add the root beer, whisking, then the sorghum, vinegar, and bourbon.

Heat over medium heat, stirring until the sugar is dissolved and then simmer, stirring now and then, until the mixture is reduced by half, about 15 minutes. It will be rather thin, like a warm maple syrup, but will have more body once it’s at room temperature. Set aside or place in the fridge to cool before glazing ham. (If the glaze is too thick to brush on, it can be slightly warmed.)

When an hour is left on the cooking time for the ham, remove the ham from the oven. If you wish to use the juices from the ham in soups or other recipes, pour off the juices into a container and refrigerate them, then add about a cup of water to the pan. If you don’t care about the juices, or don’t care if they’re flavored by the glaze, leave as is.

Rest 20 to 30 minutes before serving. Pass any remaining glaze from the pan or the roasting pan, if desired.

Note: If there is a significant amount of glaze remaining, it may be used to glaze something else, like chicken wings or ribs. Bring to a boil before reusing, thinning with a little water if necessary.

I will be bringing Not Your Father’s Root Beer & Bourbon Glazed Ham to Fiesta Friday. This week I’m co-hosting with Steffi from Ginger & Bread! We’d love to have you stop by and see us!