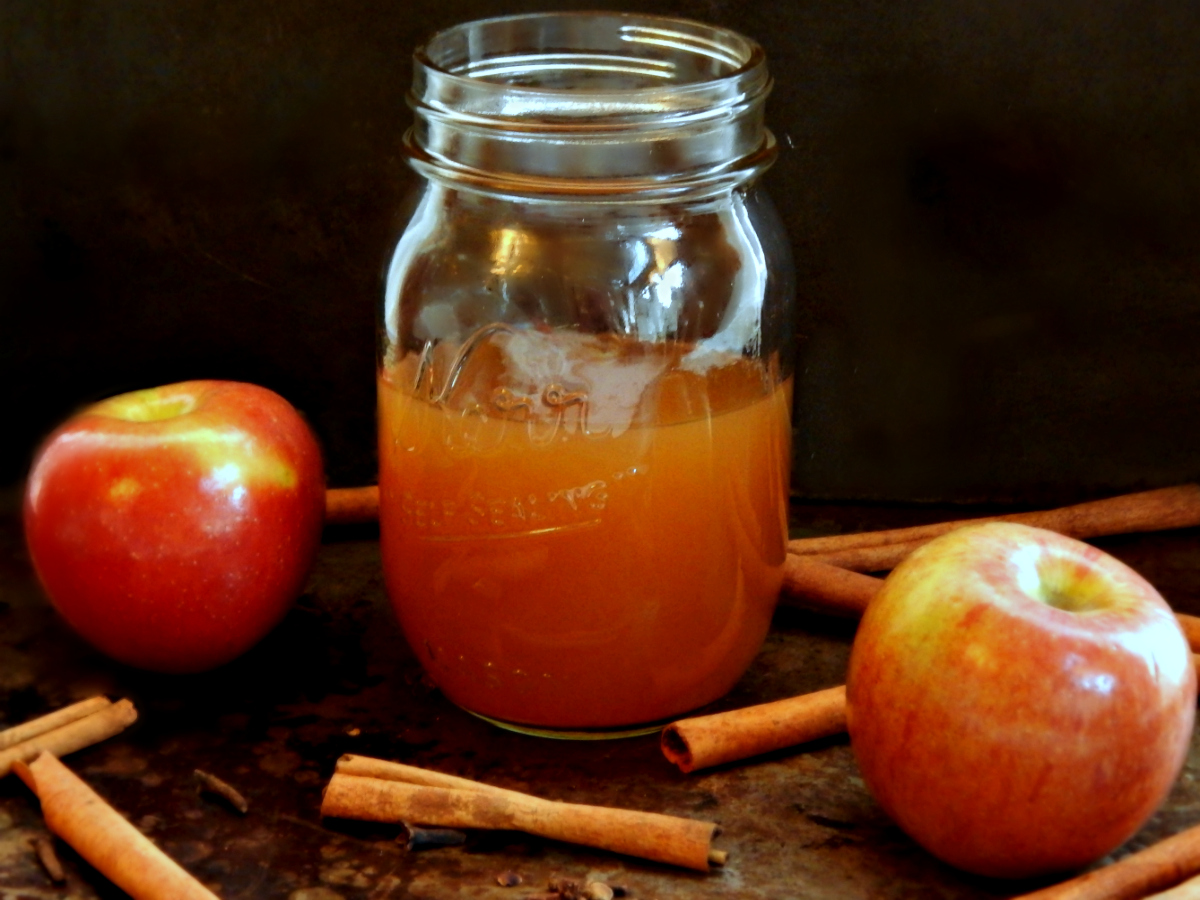 So Apple Pie Moonshine – I kept seeing photos of it, and I kept thinking about making it and finally, I made the leap. If Apple Pie Moonshine hasn’t been on your radar, read on my friend. This is a delish adult beverage that’s going to be fantastic at any fall/winter outing, tailgate or football party or bonfire or maybe even Thanksgiving or after you rake leaves, or at the cabin or on that ski or snowmobile trip. Well, serve it anytime. You get the idea!

Oh, btw, serve your Apple Pie Moonshine shine in good old-fashioned Mason Jars if you have them. Really, it’s only fitting, lol! Of course, decanting it into a glass gallon jug or growler only adds to the experience! Just sayin’…

When I wanted to make my Apple Pie Moonshine, first I had to get some Everclear. Yeah, Everclear. I try to stay away from that stuff. Something to do with a Scorpions concert at Red Rocks when I was a kid. As a matter of fact, Everclear usually doesn’t even enter my head at all. But there’s no danger here because I fiddled and faddled and formulated this Apple Pie Moonshine carefully so your glassful is only going to be about 12 percent alcohol, a little more than a beer but right along the lines of a mixed cocktail. It’s a fine line. You want enough alcohol to preserve but not so much it’s gonna knock your socks off.

But now that I think about it, there might still be a little danger because this stuff tastes sooooo good! I mean c’mon. The name along sings like a Siren’s song. If Apple Pie Moonshine doesn’t make you think of crisp fall nights in a moonlit wood, living just under the radar, I don’t know what would. And then there’s the Apple Pie part of Apple Pie Moonshine. You know it HAS to be good. That comes from the Spiced Rum. And cinnamon, clove, and allspice. Num! Serve over ice or slightly warm, maybe in your Slow Cooker. I did some little cocktails, too, that I didn’t take a pic of, the warm Apple Pie Moonshine in mugs with a little whipped cream and a drizzle of caramel sauce.

There is one important thing to know about Apple Pie Moonshine. When it’s first made, it’s a little rough. Don’t taste it and toss it! It mellows with time. Ideally, mellow it for at least two weeks. Magic happens, if you can wait and just gets better and better! If you forget about your Apple Pie Moonshine and leave it for a couple months in the back of a dark cupboard, it’s like !x^^#$@?(****#%!!! good!

By the way, if you make it this week, you can serve it to your Thanksgiving guests while everyone’s watching the game. Just sayin’. A touch of this would be great in the whipping cream on an apple or pumpkin pie!

My recipe doesn’t make as much as some Apple Pie Moonshine recipes out there. I was really after a bottle for us and a bottle for a gift, and this makes a little over two quarts, but double or triple it, it’s not a big deal. It’s just as easy to make more, and next time I make this I will!

In most recipes, Apple Pie Moonshine takes hours to make (admittedly that’s mostly sitting around time) and a huge pot because the apple cider is heated in order to dissolve the sugar and it has to be cooled before the hooch is added (primarily to preserve the alcohol content.) Maybe that’s not a deal breaker if you’re just making a small amount, but it’s a hassle and there’s no need for it.

I’m smarter than that – we’ll just heat up a little of the cider and dissolve the sugar, then transfer it to a big pitcher or pot and dump in the remainder of the cider. Then add alcohol. Easy peasy. Easy as pie. Easy as Apple Pie, lol! So there you go: hours shaved off the prep, which might or might not matter since ideally, you’ll want this to sit around and mellow for anyway.

Now some people filter their Apple Pie Moonshine and some don’t. Here’s what I found works best. Don’t initially filter, but after the mellowing process, filter it. See, it looks fine non filtered when it’s first made, and I’m all for the easy route and actually like bits and pieces in my cider but it separates and becomes very unattractive after sitting around when it’s not filtered. Even after filtering, there will likely be a bit of sediment, but a little is ok, a lot really doesn’t drink well. Filter twice through a coffee filter for best results or through cloth or cheesecloth. Heck, run it through your Britta if you want to give that a try.

This is best made seasonally when the best Apple Cider is readily available but still works with plain old grocery store Cider. Sign up for email alerts from your liquor store and buy that stuff on sale. March is generally a great time to find most alcohols on sale and of course, any holidays generate great sale prices on various items.

I gotta say, I was a little whoo-hoo after my sampling, lol! A little happier than normal. Which is better than being more normally than happy. I think. Cheers!

In a medium saucepan, add two cups of apple cider, the sugar and spices, and heat over medium heat, stirring now and then until sugar is dissolved.

Remove from heat and pour into a large pitcher. (The pitcher will need to hold more than 1/2 gallon.) Add the remainder of the cider and stir. If the cider is cold, the mixture should be cool by now so add the alcohol, if not wait until it reaches room temperature to add the alcohols.

Pour into containers for storage, preferably glass, adding a piece of cinnamon, a clove and an allspice berry to each. Store for two weeks to mellow the Apple Pie Moonshine, then filter, preferably twice, through a coffee filter. If there is no coffee filter available, try a thin cloth or multiple layers of cheesecloth.

Store at least two weeks in a dark, cool place; keeps indefinitely and just gets better with more time.

I’ll be sharing Apple Pie Moonshine on our very own Throwback Thursday Link Party as well as on Fiesta Friday. The co-hosts are Margy @ La Petite Casserole and Suzanne @ apuginthekitchen. It wouldn’t be Saturday without linking up at Saucy Saturdays blog hop!