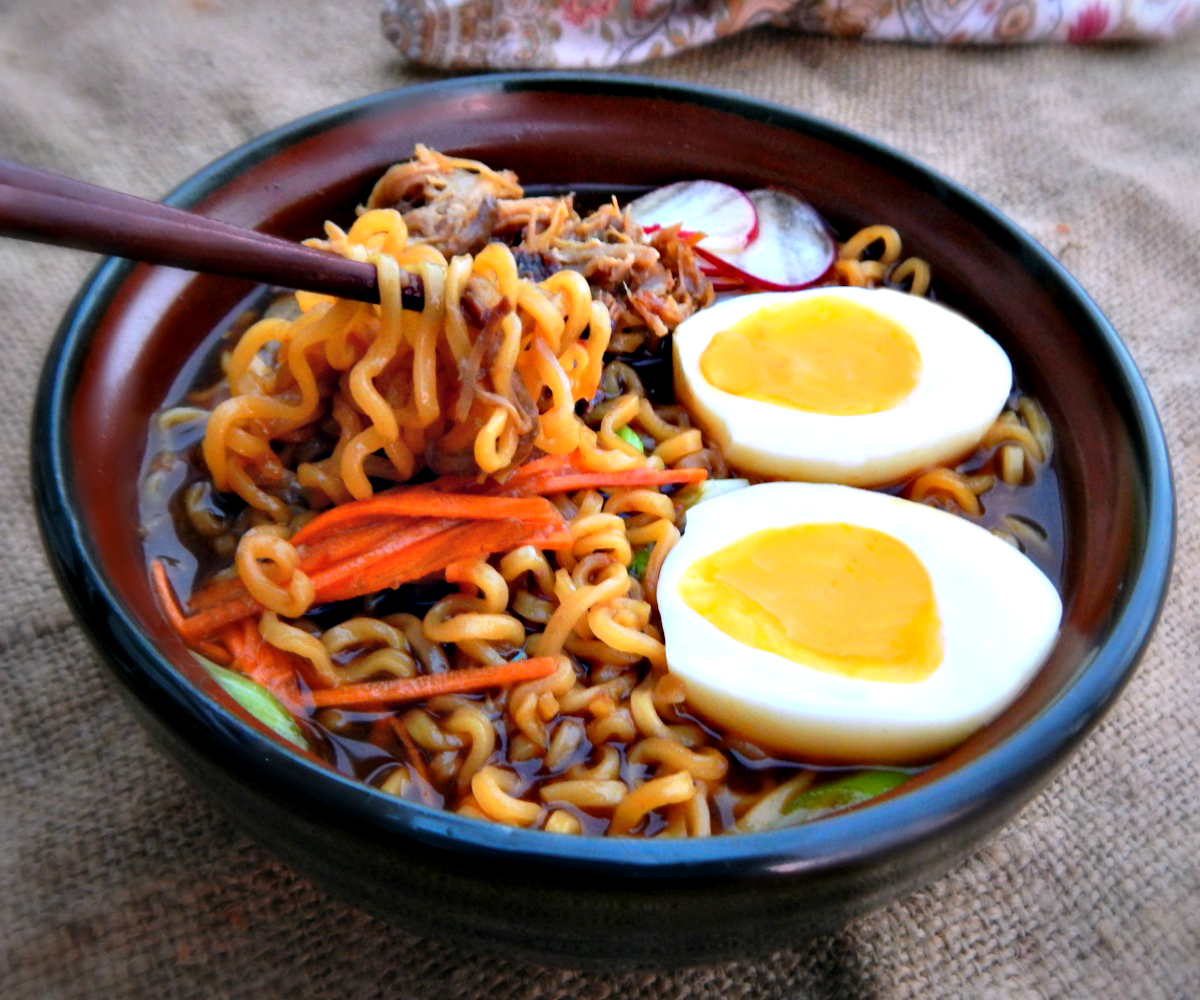 If you’ve been following along (Do I sound like a teacher? Class?) you’ve probably seen my most marvelous recipe for Vaguely Vietnamese Slow Cooker Pork Tacos last week. If you haven’t, take a peek, because that recipe is the starter for this Shortcut Pork Ramen. And as good as those tacos were, this spin-off recipe is even better.

So I apologize if you just landed here thinking “shortcut” and then found out you have to slowly braise pork shoulder in the slow cooker first – what can I say? That pork will give off a ton of marvelous rich, silky broth with all the aroma of spices and herbs from a far-flung land.

And the rich, silky broth is  going to give you one of the best home-made Ramens you’ll have and it’s not going to be days in the making. Once you have the pork and the broth to work with, Ramen is practically instant. You can have dinner on the table in literally minutes. And if you don’t have this particular Vaguely Vietnamese pork & broth to work with, try it with what you do have. (It’s hard to go wrong.)

You won’t use much pork in this ramen, but that pork is going to be delicious and intense – because I’ve taken a bit of a departure and caramelized the pork. You heard right: Caramelized. So it has tons of flavor and crispy bits. Like Carnitas but with an Asian flair. You wouldn’t say no to that, would you?

Well, I wouldn’t – unless I was in a super hurry. Hey, it happens and if you’re all about “Just get this in my belly right now,” caramelizing the pork really is optional and takes about five minutes. The shredded pork “as is” is still very good in this. But now that I’ve said “caramelize,” you’re not going to be able to get that off your mind, are you?!

If you’ve made the Vaguely Vietnamese Slaw and have a bit leftover, you can take another shortcut and use that to garnish your Pork Ramen. It’s a beautiful contrast in texture and flavor. If not, just a few slices of this and a bit of that is always good. I used radishes, carrot and green onion, but add in your fave veggies, thinly sliced so they heat and soften and take up flavor from that broth.

All that’s really left to think about are the Ramen Eggs. I love them and love adding them to my Ramen now that I’ve figured out just how to make them! You’ll have to think ahead because they need to marinate for four hours and up to 24. If not, use a soft-boiled egg, cooked just how you’d like. I’ll give you the timing in the recipe, below, for everything from custardy to runny.

You’ll use the broth from the Vaguely Vietnamese Slow Cooker Tacos for this recipe. Using it “leftover” allows the fat to rise to the top in the refrigerator which facilitates the removal.

The well gelled broth is so rich it will need to be cut with a little water. Depending on how brothy you like your Ramen, and how strong the broth is, measure your broth and then add enough water to make anywhere between 6 to 8 cups.

Bring broth to a boil, add noodles and cook according to package directions.

In the meantime, caramelize the pork, if desired, if not, gently warm.

To caramelize, in a large skillet add the sesame oil and heat to medium high, being careful not to burn the oil. Add pork and sprinkle with a tablespoon of palm or brown sugar and a tablespoon of mirin. Toss together and allow to caramelize for about two to three minutes, watching closely. Remove from heat and keep warm.

Divide noodles and broth between four bowls. Arrange pork and vegetables over the top, along with Ramen Eggs or soft-boiled eggs, one per person, cut in half. Serve with lime.

Bring enough water to cover eggs by about two inches in a medium sized saucepan to a boil. Add eggs and immediately lower to a simmer. Cook for the length of time desired, below.

Timing for eggs; timing may vary depending on how high you are above sea level.

Remove eggs and immediately plunge into a generous bowl of ice water. Leave for three minutes then peel and slice in half.

I’ll be sharing this recipe on our very own Throwback Thursday Link Party as well as on Fiesta Friday. The co-hosts are Margy @ La Petite Casserole and Suzanne @ apuginthekitchen. It wouldn’t be Saturday without linking up at Saucy Saturdays blog hop!

I’m so happy to announce that this Ramen was featured on Fiesta Friday!

25 thoughts on “Shortcut Pork Ramen made from Vaguely Vietnamese Pork”