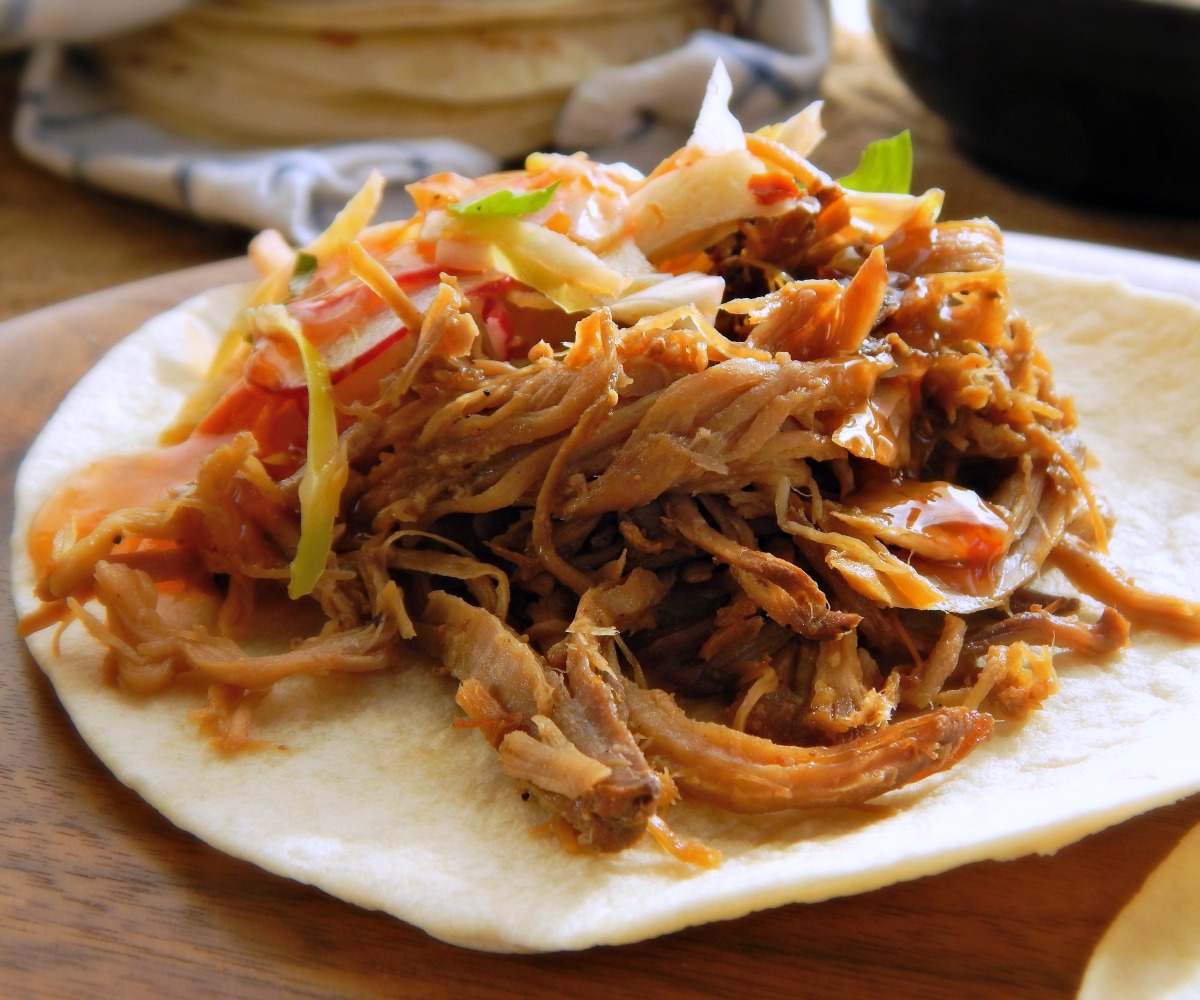 Slow cooked to perfection, this fall off the bone, tender pork was featured in “Slow Cooker Redeemed” in the New York Times. “It results in a vaguely Vietnamese tangle of pulled pork that is best accompanied by a bright and crunchy slaw, and served on warm flour tortillas…” I made you wait for Vaguely Vietnamese Slow Cooker Pork Tacos, yesterday when I posted the Vaguely Vietnamese Slaw recipe, and I think these Tacos are worth that little delay.

I was intrigued the first time I saw this recipe. And then I read all 121 comments – many less than enthusiastic. A lot of problems with the cook time (which was a simple fix – the instructions should have said cook on high, not on low) and a lot of complaints about lackluster flavor. Yeah, I fixed that, too, thanks to all the lovely commenters. And if you’d rather braise this roast in your oven, those instructions are included, too.

As I read through all the comments, one in particular, from “RJ” really caught my attention. He gave a few recommendations to really amp up the flavor and one was an unexpected twist, a coffee rub from Zingermans! It was the “OMG this is righteous!” that sold me. Was the recipe really righteous? Really? I had to find out.

It was indeed righteous! Of course, I have to laugh a bit as I say (well, type) the word. Just the thought makes me want to gel my hair and wear a little three-tiered skirt. Or maybe slice up a T-shirt and put on a ripped up pair of pants. (Which, I see, are back in style now…maybe? I can’t keep up anymore…)

The slow cooked pork was silky, tender, unctuous and so great in tacos with the Vaguely Vietnamese Slaw. I did one more thing to amp up that flavor. I took about 1 1/2 cups worth of the resulting broth and reduced it to concentrate those flavors and added it back into the shredded pork. You don’t have to do that reduction step. I just like to complicate things up a bit sometimes. The rest of that lovely broth, by the way, will become a Shortcut Pork Ramen Soup later in the week, and since this makes a lot of shredded pork, I froze some for another meal.

Vaguely Vietnamese Slow Cooker Pork Tacos are pretty straightforward to make. First give the pork a rub with the coffee rub & five spice mixture, then saute the onions and garlic. Put some of that mixture in the bottom of the slow cooker and pile the rest on top of the pork, cover and cook until it’s juicy and tender and falling off the bone.

You know, of course, I’m gonna use my own Coffee & Coriander Rub, and I’ll sub in a little five spice powder for the varied and assorted herbs and spices…be careful with the five spice, folks. It can hijack your flavors in a heartbeat – it’s strong. Don’t go putting heaping spoonfuls into your recipe.

If you don’t want to use your slow cooker for this recipe, pull out your Dutch oven, add a little more liquid and slowly braise the roast to fall apart perfection. Just check the liquid level now and then because it’s going to be cooking for a while. That makes this recipe perfect for a cool fall day!

When buying pork shoulder, you want to be aware that after the fat and collagen have all melted away, you’ll be left with about 1/2 the amount (poundage wise) that you start with. And you’ll probably want to allow for a rough average of about 6 ounces per person, depending of course, if they’re all adults or a mix of adult and kids. It never hurts to portion out an adequate amount for serving and stash the rest in the fridge. At my house, if my son is home, he’d definitely decimate most of this in one sitting if it were all on the table!

Anytime you’re cooking with Pork Shoulder, you have the opportunity to bring in a great meal at a budget price. Watch for pork to drop to a low during fall to late winter, with lows again just a month or two before any holiday that features ham. They have to do something with the rest of the pork when all those hams are being prepared for Christmas and/or Easter.

If you miss that timeline, pay attention to the pricing in your area and know the highs and lows. At a really great sale, I can find pork shoulder from around 99 cents a pound (one time, a bit of a fluke, the sale price was 49 cents, but that’s not normal) and those great sales can range up to around $1.69 a pound. Buy at a low and freeze. If the roast is huge, divide it up. See more on my post on Buying a Large Pork Roast.

Prepare the pork by removing most of the fat from the top. Mix together two tablespoons of Coffee Coriander Rub with two teaspoons of five spice powder. Rub all over the pork, set aside.

Place a sauté pan over medium-high heat. After a minute or so, swirl in the sesame oil and then the onions, stirring to combine. Sauté for about 5 minutes, being careful not to burn, then add the garlic and continue to cook until the onions are soft and becoming translucent. Remove from heat, stir in the ginger.

Add to the mixture the hoisin, garlic chili sauce, rice wine vinegar, honey, fish sauce, and lime juice, and stir to combine, loosening the mixture with a little less than half a cup of water.

Put a few spoonfuls of the sauce in the bottom of a slow cooker, then nestle the pork on top of it. Pour the remaining sauce over the top of the pork.

Shred the pork with a pair of forks. Discard bones. Now do any of the below:

To cook this in the oven, braise the pork shoulder, covered, in a 325 degrees F oven for about 3 1/2 to 4 hours. Add in an additional cup of water before placing in the oven and check from time to time that there is enough liquid in the pan to keep the juices from burning.

I’ll be sharing this recipe on our very own Throwback Thursday Link Party as well as on Fiesta Friday. The co-hosts are Judi @ cookingwithauntjuju and Maggie @ Spoon in a Saucepan