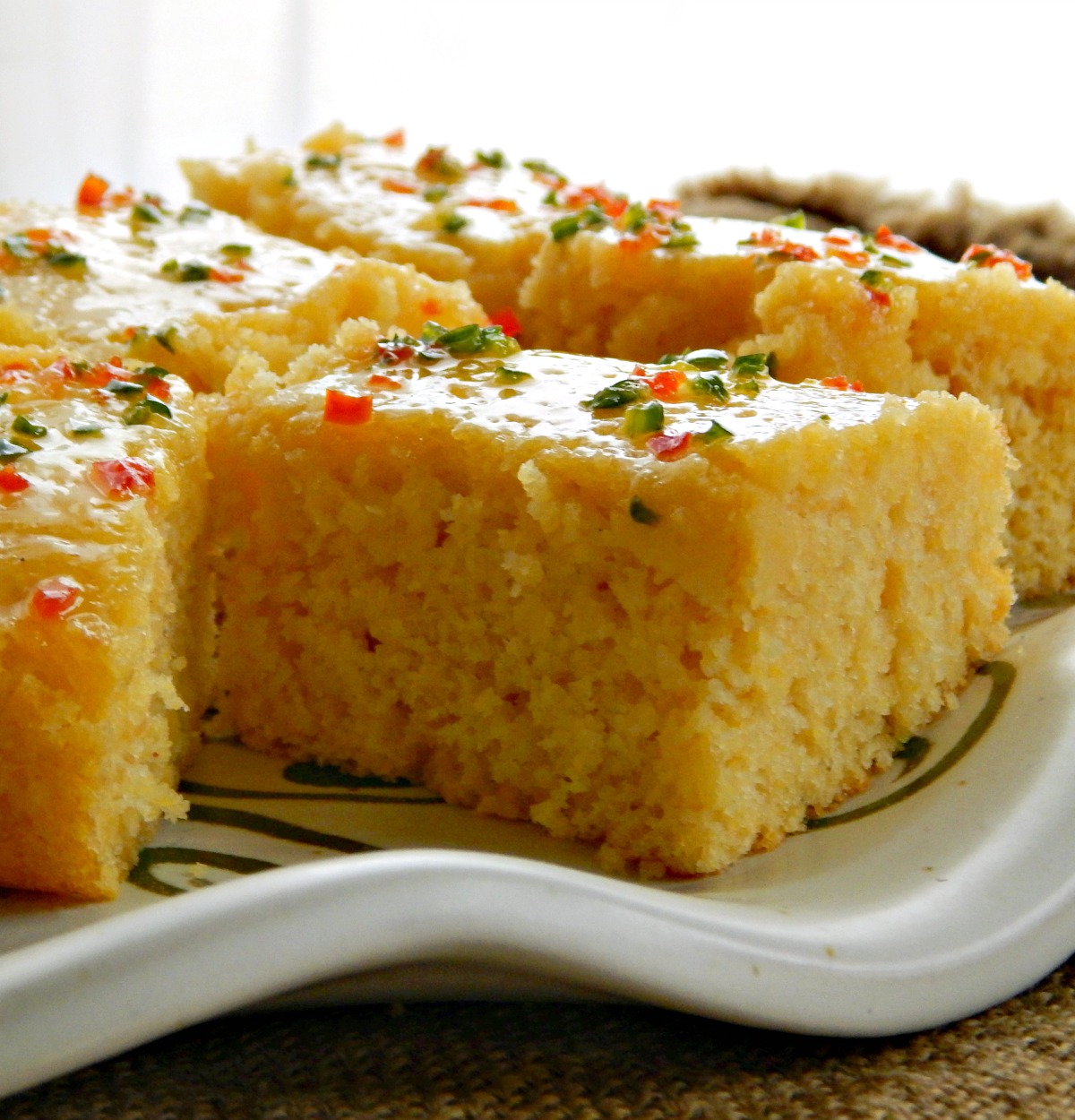 If you want an incredible, moist, fluffy cornbread, you’ve got to try Famous Dave Anderson’s recipe for his Famous Dave’s Cornbread. He claims it’s even better than his corn muffins that are served at his Famous Dave’s restaurants. I agree!

Famous Dave’s Cornbread is the best cornbread, ever, and why wouldn’t it be? Not only is the recipe from Famous Dave, himself, but one of the ingredients is cake!

I realize that even the thought of a cornbread like this, light, fluffy and sweet cornbread might offend hardcore, traditional cornbread lovers. In theory. That is unless they’re bold enough to actually try Famous Dave’s Cornbread. And it might be a godsend to those out there that want to like cornbread but just can’t quite wrap their tastebuds around that drier, grittier, crunchier traditional cornbread.

I actually am kind of a newer cornbread convert. Years of dry cornbread served at school lunches that were only partially redeemed by being drowned in pools of syrup left me cold for cornbread. If they would have served either of Famous Dave’s toppings, I probably would have liked even that cardboard.

Now let’s talk about making Famous Dave’s Cornbread. I mentioned his big secret, already. One of the ingredients is cake. Yep, plain old Jiffy Yellow Cake Mix. If you can’t get a hold of Jiffy, just buy whatever cake mix is the least “fancy” and bonus, probably the cheapest. Avoid the ones that already have eggs and/or pudding in the contents. And since you’re not going to use the whole cake mix, just toss the rest in a Ziploc, label it and use it in the next batch. And trust me, once you make Famous Dave’s Cornbread, you’ll want to make it again. And again. And again.

I bake Famous Dave’s Cornbread cornbread in an 8 x 8″ pan because that’s what I have (and is probably what most people have) and it turns out beautifully, as you can see, even though the original recipe says to use a 9 x 9.” pan. The recipe might seem to “stretch” a bit more in the larger pan, but don’t be afraid of making this recipe, even if your family is small. The leftovers are moist for days.

The recipe is pretty inexpensive to make. The cake mix, even Jiffy, is usually more than plain old flour. I’ve tried the recipe without and just subbed flour and it’s still good but it is better with Jiffy!

You probably know the old vinegar plus milk substitute to sour milk and sub for the buttermilk. Just add a tablespoon of vinegar to the measuring cup and top it with milk to measure to one cup. Let it sit for a few minutes to thicken a bit.

Just one more quick tip for you: when you bring items containing flour or cornmeal into your home, freeze for 3 days before putting it in your cupboard. That’s going to help you avoid bringing any “peskies” into the house.

This is a light, fluffy, moist and beautiful cornbread topped with a jalapeno glaze, just like the restaurant uses.

In a medium-sized bowl, mix together the flour, cake mix, cornmeal, baking powder, and salt.

In a small bowl, add the egg and brown sugar and beat, then add buttermilk, oil, and mayonnaise and mix to blend together.

Pour the wet ingredients into dry mixture and lightly blend together… do not over mix …blend just enough until the dry ingredients are wet.

Pour into greased cake pan and then bake for 20 to 25 minutes until top is lightly golden brown and the center is somewhat firm. A knife, when inserted, should come out clean.

* If you can’t find Jiffy Yellow Cake Mix…use the cheapest possible… they seem to work better for cornbread!

For the Honey Butter:

Whip somewhat soft room temperature butter with honey. Immediately after removing from oven brush the top with Honey Butter and serve the rest with the cornbread.

For the Jalapeno Honey Glaze:

Heat butter in a small saucepan until melted. Stir in the peppers and bring to a simmer. Add cayenne and honey and cook for about five minutes, stirring now and then, until peppers are softened but still retain a bright color.

Remove from heat and brush over the warm cornbread. A few minutes later, repeat. Serve any remainder along with the cornbread.

I’ll be sharing this recipe at Fiesta Friday, hosted this week by Petra @ Food Eat Love and Lina @ Lin’s Recipes. Click on the links to visit! 🙂