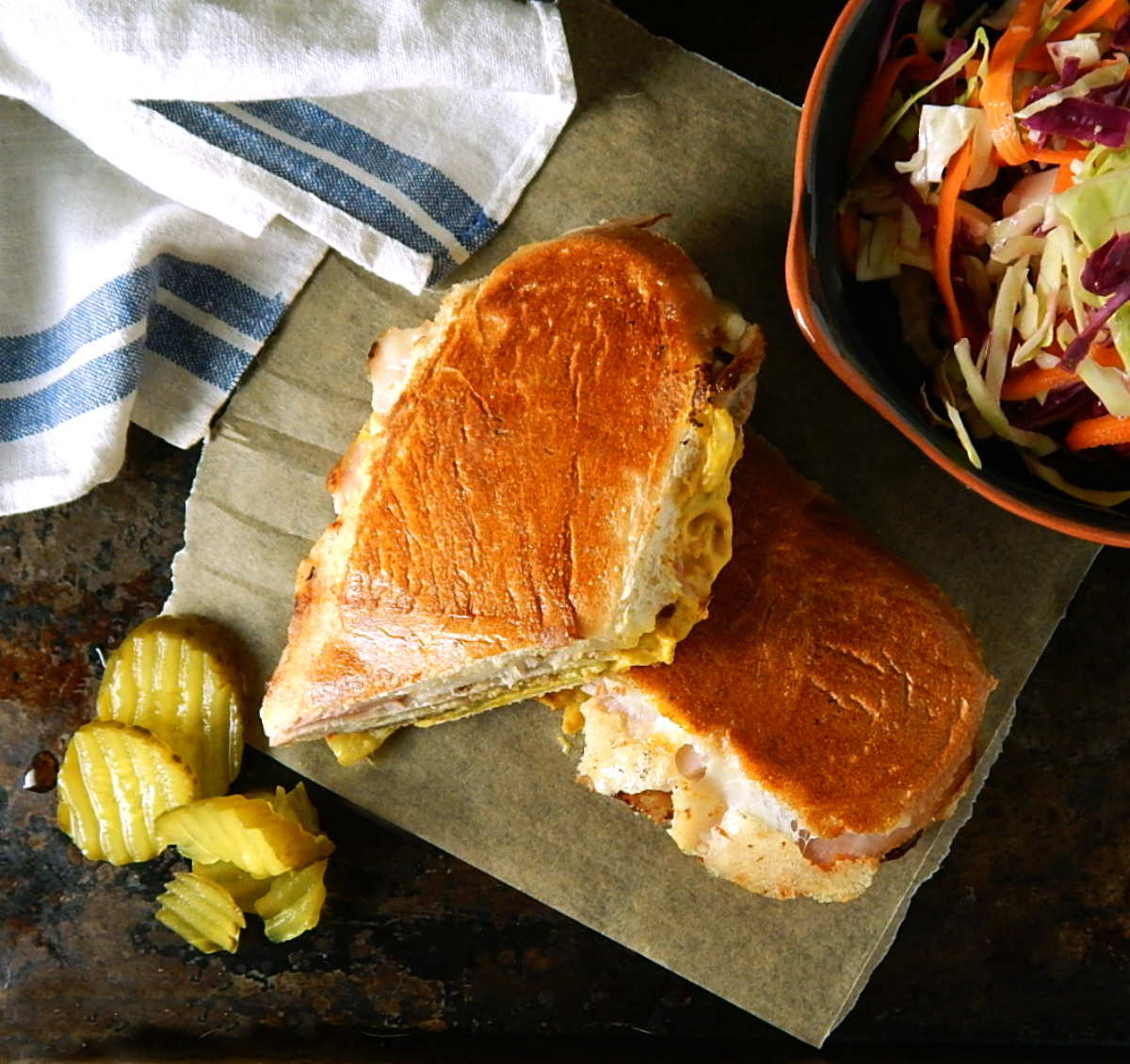 The Cuban sandwich – such a classic and so American, from what I understand! And like many classics, the Cubano Cuban Sandwich sparks heated debate. There are those who say the bread makes the sandwich and it’s impossible to have a great one outside of Miami  – I disagree. I think you will, too, after your first bite of this one!

I think it’s the citrusy, garlicky pork shoulder and good, sweet ham (for the ham, you’ll need a cut 1/4 inch thick or so, a slab, not shaved lunch meat) that really makes the sandwich. If you don’t have ham in the house, ask your deli to special cut it for you.

If you’re a purist and don’t have a Cuban bakery nearby, you can make your own bread. But if you’re not into those kinds of heroics, I’ve had pretty good luck using two types of bread, the little soft deli buns from Aldi (yes, I know! But it’s true!) or soft (not a hard, French baguette, but the “Italian”) grocery store baguette. Around here, they’re packaged up in the bakery department. Three Guys from Miami suggest stopping by a Jimmy John’s and picking up a loaf of their bread.*

Three Guys from Miami (I love these guys and they inspired my Lechon Asado, the pork shoulder roast these sandwiches were made from) state that an authentic Cubano doesn’t have mustard or mayo, tomato or lettuce. My preference is for a little mustard, probably because the first Cubano I ever had did have mustard. No fancy mustard, just the yellow ballpark kind. That’s the great thing about making your own, though! No “rules!” Make it how you want it.

If you want to make an evening of it, invite friends over, fire up your Netflix and watch “Chef.” I mentioned this movie on my post for Individual Molten Lava Cakes, but it was all the Cubano sandwiches made in the movie that really made my mouth water! Before you click, be prepared for some “bad” language. Be prepared, too, to want a Cubano and to dance around the kitchen as you make it!

While I wouldn’t discourage anyone from making a similar sandwich with any leftover Pork Roast or Pulled or Shredded Pork, I would highly encourage you to take a little time, plan ahead and lovingly marinade and braise a pork shoulder for Lechon Asado. Have that meal. It’s fantastic. Then set aside some of it for this sandwich. They’re just insanely good!

If you want to, sneak a little of the oniony sauce from the roast into the sandwich, but not too much or it will be “slippery”. If you’d like to go wild, a touch of my Sweet Pineapple Mango Habanero Hot Sauce is great, or set some out for those who like to “dip.”

I can’t think of a better side than either my Bomb Baked Potato Wedges or my crispy Stupid Simple Sweet Potato Fries. Maybe a little Creamy Cole-Slaw. Perhaps a Vinegar Based one? Or even better, this newer Cuban Cabbage Salad. Unless of course, you have access to plantains…

To prepare Cuban sandwiches, split bread in half then layer the sandwich with mustard, pickles, cheese, ham, pork then cheese again. Optional: drizzle a little of the sauce from the roast over the meat.

Although not strictly necessary, lightly steaming the ham and pork before assembling makes a great juicy sandwich, hot all the way through. Simple heat up your pan, place the meats in and toss in about two tablespoons of water. Lid and let cook until the water has evaporated and meats are hot and tender.

Cuban Sandwiches are not always “pressed” and can be served as is or griddled like a grilled cheese sandwich. If you’d like to press this sandwich, there are several ways, below.

Jimmy John’s will sell a loaf of day-old bread for 50 cents if they have it, or a fresh loaf for $1.00. I have on occasion stopped by Bruegger’s Bakery when I’m nearby and it’s late in the day – and picked up bagels half-priced. You’ll be surprised at how many places discount items, usually unadvertised, if you take the time to look around or are brave enough to ask.