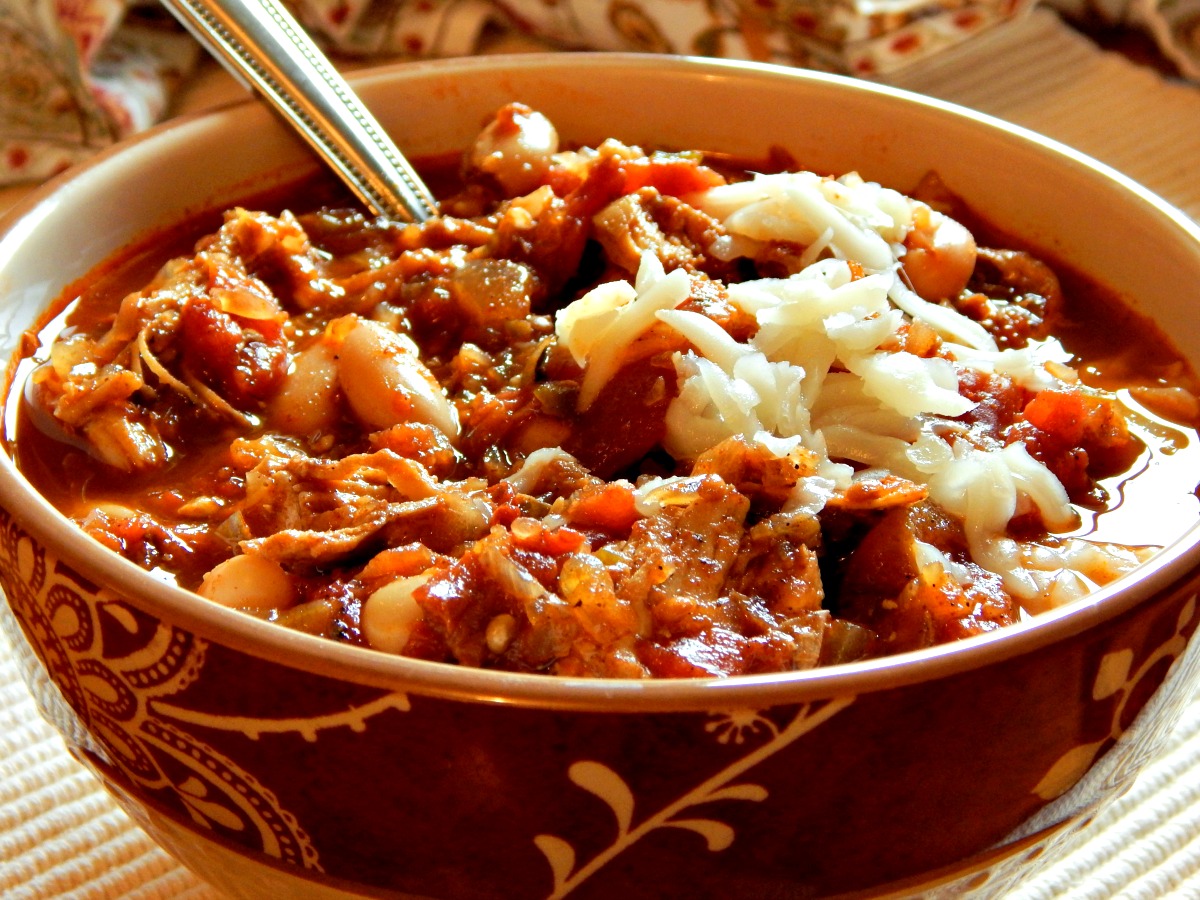 I have a few different Chicken Chili recipes here on my site and a couple of Beef Chilis, too. And they all have their place and all serve their purpose. This one here, this Chipotle Chicken Chili is a serious chili. This is an adult Chili. This is the Chili you want to serve to score points on game day or at the ski condo when you’re serving to those you know can man up and take it, even if they’re maybe not men. Maybe even if they’re a Grandma five times over like me!

Seriously, this Chipotle Chicken Chili isn’t going to kill you but unless you have kids like mine that grew up eating all kinds of spicy food, you probably want to keep this for the adult parties. Of course, like any Chili, as long as you are making your own, you can control the heat, and I gave you a range from hot to hotter. Which is nice because my hot might not be your hot…

A bit different from the White Chicken Chilis out there, this Chipotle Chicken Chili is a deeply rich, earthy, spicy chili that just happens to have white beans and chicken. And it has a lot more than heat, it has an incredibly complex flavor that tastes like it was slowly simmered for hours. And that’s achieved in about 40 minutes.

If you decide to reduce the heat level, start with the lowering the amounts of the different chiles rather than eliminating any of the three chiles in the recipe, the chipotle, jalapeno, and the chili powder. Together, they give such a wide range of flavor and depth to the chili that would be missing otherwise.

I adapted this recipe from a recipe by Lucinda Scala Quinn of Mad Hungry (I loved that show!) she called Hearty Chicken Chili and both fabulously “frugalized” it and streamlined a bit to make it a little straightforward and a bit do-able. Actually, now that I am going back and looking at the original, I made quite a few changes in it! What I didn’t change though, was the flavoring. What I wish I would have kept are the little cornbread croutons. Oh well, next time!

First of all, I always double the recipe for Chipotle Chicken Chili and sometimes make a lot more! This recipe as written makes a little over six cups, which is a bowl for four people, about a cup and a half each. That’s not going to go far in my family and def isn’t enough for a party! Besides, any Chili tastes better the next day and any Chili is a great candidate for making a larger batch and freezing for a later meal. Besides, this is so good, I can’t bear the thought of no leftovers.

Watch the heat on your pan as you’re searing the chicken; too hot and you’ll burn all the fond (the lovely little browned bits on the bottom of the pan) and that gives so much flavor to the Chipotle Chicken Chili. Watch the spices, too, as you toss them into the heat. That will wake up the flavors of spices, but be ready to add in the rest of the ingredients as soon as those spices become fragrant.

Use a SPOON instead of a knife to clean ribs from ANY pepper.

This Chili can easily be stretched by adding another can or more beans and maybe just a bit more broth. The lowly bean is one of the healthiest foods you can eat – eating beans regularly basically eliminates the issues so commonly known. Dried beans are so inexpensive to start with that they are seldom advertised as being on “sale,” but they often are after any Holiday in which Ham is usually served. If you’re used to buying canned beans, unless a 15 ounce can is less than 26 cents with sales and coupons, they are more than the 79 cent per pound price of dried at Aldi. A fifteen-ounce can is about 1 1/2 cups of beans, and a pound is roughly the equivalent of 3 cans.

Never buy full price chicken – it goes on sale too often. Stock up and break down larger packs in sizes your family can use. It really pays to make your own Chicken Stock with bones and scraps, but if you don’t buy your stock during the glut of sales over the Winter Holidays and around Easter.

Tomatoes go on sale periodically so stock up, and if you’re not too particular about the brand you’ll find better deals. A lot of time you’ll see Catalinas (slips that print out at check out giving you money back if you buy so many. Catalinas are often unadvertised. Check your coupon matching site.)

Cans of Chipotle Chilis are often on sale unadvertised, and usually at a low during Cinco de Mayo. Once a can is opened, just put the rest in a Ziploc and freeze. They don’t freeze totally hard and can be chopped right from the frozen state.

Add oil to a large, heavy Dutch oven (preferably enamel cast-iron) and place over medium-high heat. Add chicken and allow to sear before stirring, five to six minutes, then remove to a plate. Work in batches if necessary.

Reduce heat to medium and add onion mixture. Cook, stirring now and then until golden brown. Push aside onion mixture and add chili powder and salt, stirring until it is fragrant and begins to darken, about a minute. Stir in chipotle and chicken, raise heat to medium-high and add tomatoes, stirring to loosen darkened bits on the bottom of the pan. Stir in the stock and cook for about 20 minutes at a simmer. Add beans and simmer until heated through about 10 more minutes.

Serve with desired toppings, and/or cornbread.

One thought on “Chipotle Chicken Chili”