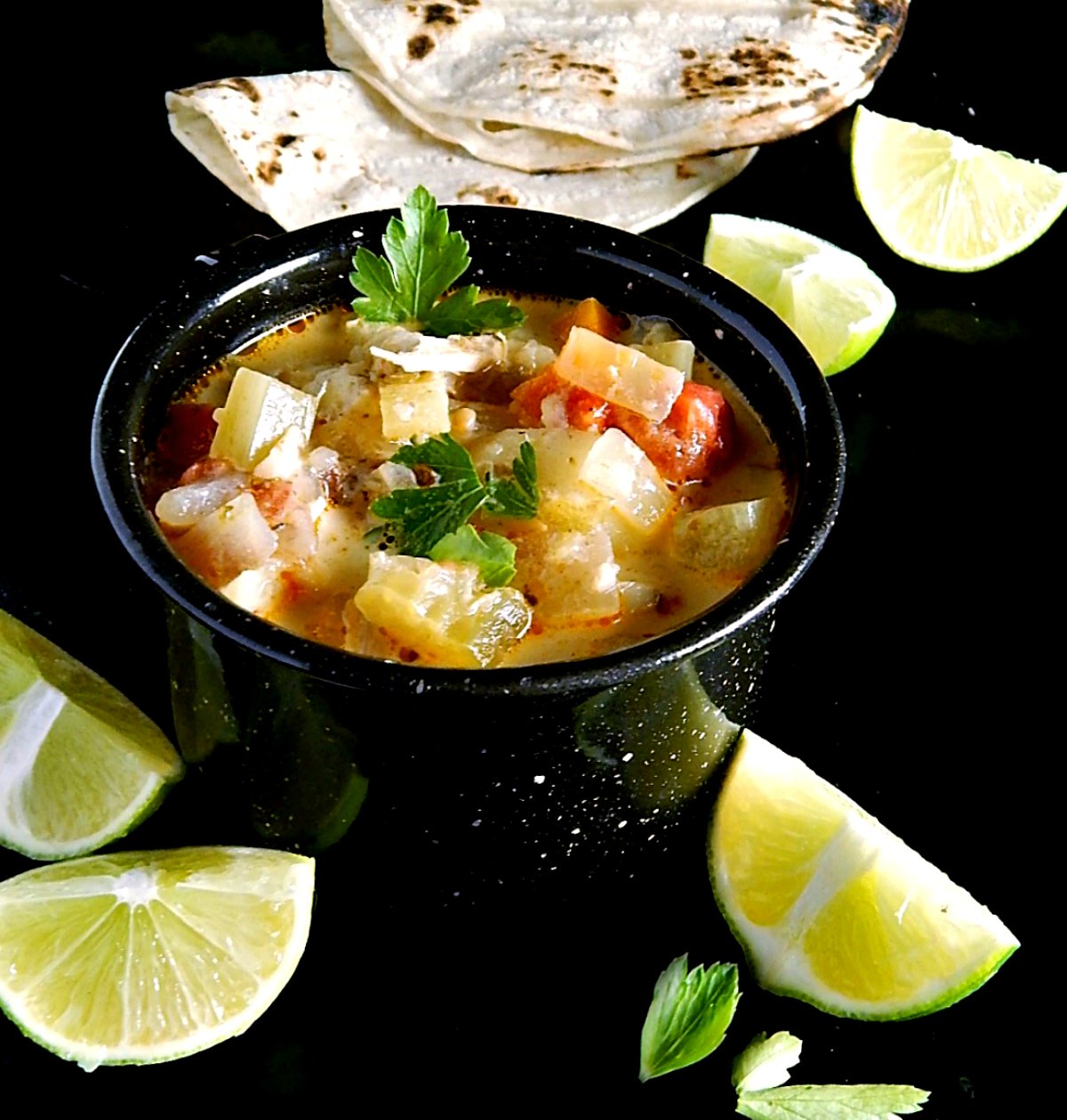 And I would eat this soup all the time. It’s a lovely chowder full of all kinds of goodness: chicken, potatoes, and hominy all brightened up by poblano, chipotle, cilantro, and lime. Just a bit of heat, to add a little “interest” as my Dad would say. Now maybe you’ll love it as much as I do, and hopefully have no “haters” at your house!

Frankly, I kind of stole the idea for Chipotle Chicken Chowder off a Cooking Light recipe – I’ve been intrigued by Chupe de Pollo con Chipotle published years ago, but still floating around Pinterest. It was really good but a bit of a pain to make. Time-consuming. And it involved lots of cooking and then blending. And then more cooking, lol!

And so I changed up a few things, took some liberties and streamlined this gorgeous soup down from hours to about 45 minutes. Now there’s no need to save this for a weekend project. You can have it just about any old day! I am going to mention that this is one of those thick, stand your spoon up chowders. Chipotle Chicken Chowder is a chowder in the OG sense, “A soup with the addition of cream or milk.” It’s very soup-like.

There’s one little Chipotle in this big pot of soup, so it really isn’t hot, hot, hot, and just so you know, It’s just nice with a hint of a bite. I added roasted Poblano for a bit more flavor. Poblanos aren’t really hot, either. If you’d like to see where they fall on the Scoville scale, check out the Chart Mike from Chile Pepper Madness put out. Keep in mind that chipotles are smoked jalapenos, packed in an adobo sauce. Feel free to up the heat, if you’d like, but don’t be afraid to make this recipe as is.

While I’ve made it today with chicken, obs, from the name, right, I love to make this soup after Thanksgiving, when I’m tired of all the leftovers and craving something different, with leftover turkey. Just add the turkey in at the end, and let it gently poach to heat through.

One ingredient that can be a bit tricky to find, depending on where you live, is the hominy. I use it in a couple recipes (this one and both of my Posole recipes, my Green Turkey Posole – Posole de Pavo and my New Mexican Red Pozole)  so I usually have it on hand. If you love the hominy flavor, use out of the can or if you’re a little more lukewarm, give it a good rinse. If you really can’t find the hominy, use a can each of corn and creamed corn or maybe just 2 cans of corn. It’ll be different, but good.

If you shop carefully, this is a super inexpensive soup to make. Check your Mexican/Latino market if you have one. In my area, if I shop at one of the stores in the area where there is a larger Latino population, I find the ingredients are less expensive. Same store, same ingredients, different prices. I also look for unadvertised sales around Cinco de Mayo.

Chipotle Peppers in Adobo Sauce are canned, and the recipe uses 1 pepper. Toss the rest in a Ziploc in the freezer and break off as needed for other recipes. I buy and roast several poblanos when I make a recipe using them, then freeze the extras. A 4 ounce can of green chile can be substituted if need be.  Watch the prices on the basic ingredients, peppers, potatoes, carrots, onions, etc. and cook more with them when you can pick them up at a low. The same with chicken, and toss that in your freezer in packets to suit your family size. The cream is always at a low at Aldi or during a holiday sale and keeps for weeks.

Chipotle Chicken Chowder is very good leftover, although the color may become a bit dull and it will need to be stirred back together. Serve this with muffins and/or cornbread, or tortillas if you’d prefer. My favorite cornbread with this soup is my Jalapeno Cheddar Cornbread, but I have a few choices on my site under my menu for Quick Breads.

Remove 1 chile and 1 teaspoon adobo sauce from can; reserve remaining chiles and sauce for another use. Finely chop chile; set aside.

Heat oil in a large Dutch oven over medium heat. Add chopped chile and sauce, onion, celery, carrot, bell pepper, cumin, and oregano. Cook 7 minutes or until onion is tender, stirring frequently. Add a bit of water if mixture seems dry. When vegetables are tender add garlic and saute for a moment.

Stir in broth; bring to a boil. Add chicken, cover, reduce heat to medium-low, and simmer 25 minutes or until chicken is tender. 15 minutes into cooking time, add potatoes. Remove chicken with a slotted spoon, and cool slightly. Shred chicken with 2 forks and return to pan.

Add hominy (I like a strong hominy flavor and don’t rinse mine, but if in doubt, feel free to do so), bring to a simmer over medium heat. Cook, uncovered, 10 minutes or until potatoes are tender.

Remove from heat and stir in cream, tomato, cilantro, pepper, and salt. Serve with lime wedges.