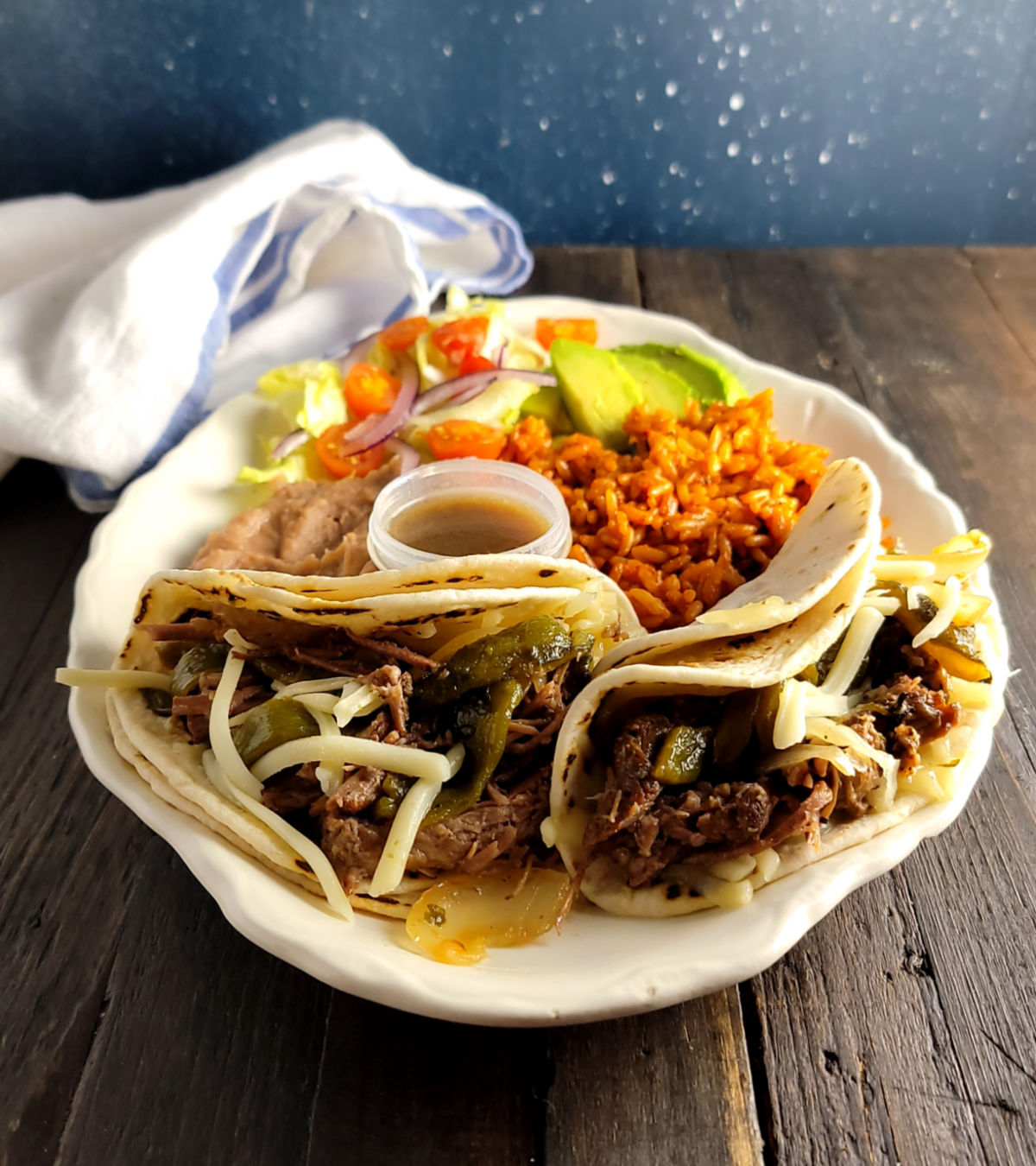 I gotta tell ya, my fave recipe of the year has got to be Instant Pot Brisket Street Tacos. That’s sayin’ a lot because the winter holidays haven’t even rolled around yet and that’s when I do most of my “special” cooking and lots of desserts. Who knows, maybe I’ll make something that will edge these tacos out, yet, but these are mouth-watering crazy good.

Often when I make an Instant Pot Recipe, I’ll also make a traditional stove-top or oven version, too. Not this time, though. It’s IP only. That being said, I don’t think I could get along w/o my IP these days, so if you have one or any electric pressure cooker, great. If you don’t, think about it. This recipe is reason enough!

This is my loose interpretation of a Texas Brisket Taco, which is a regional specialty. There are a couple of things that just “make” the taco. First of all, there’s the slow-cooked (although not so slow in the IP) brisket which is hella good on its own, beefy and peppery and not at all spicy. I was hard-pressed to resist snacking on the beef…and by dinner, I was already full, lol!

But beyond that, the tacos are topped with a mix of onions and poblano peppers (often with a good amount of garlic), melty Monterrey Jack cheese, and served with a bit of the juice the meat cooked in. Sometimes those juices are made into a gravy. It’s the onion/poblano mixture that gives this the Tex Mex flair. Without them, you just have plain ol’ brisket (which isn’t a bad thing but isn’t Brisket Street Tacos.)

Probably the most famous place for Texas Brisket Tacos is Mia’s Restaurant, where you’ll get Butch’s Original Brisket Tacos: a plate with two tacos, rice & beans, your choice of flour or corn tortillas, and a bit of salad. That last you can add to your tacos, eat, or just ignore, lol! I like to include a little lettuce, tomato, onion & avocado. And of course, lime.

If you want to get fancier, you can’t go wrong with some Pickled Red Onion or some Escabeche (pickled vegetables) or even some Pickled Jalapenos to cut through all the richness of your tacos. All of these pickle items are super easy to make. A few lime wedges wouldn’t be a mistake, either and would serve the same purpose.

There are a couple of things that take these tacos next level: I use roasted garlic (which is super easy in the IP) and while not strictly necessary, I like to use the little street taco flour tortillas (that also helps to “stretch” the beef because they’re small) and I like to griddle them (optional) before serving.

Making the beef is straightforward. You’ll cut it into a couple of chunks, brown it and then cook it broth with a bit of onion and jalapeno for flavor in the Instant Pot until tender. (Don’t forget to toss in the garlic packet!) For this amount, it will take 55 minutes or so of actual cooking and then a long, slow, natural release, about 30 to 35 minutes. The slow-release is important; it’s part of the cooking time and the slow release ensures your precious beef doesn’t seize up and become tough.

The beef, when done, should be tender enough to easily pierce with a fork, but not so done that the beef just falls apart – that keeps the moisture in the beef. If it needs a bit more time, just close it up and add a minute or two (it will come back to pressure quickly) then give it a 20-minute release. Hopefully, the timing will be as spot-on for you as it is for me. Just place the beef in a bowl, strain the broth and add any onion and jalapeno (along with that garlic) to the beef. Shred the beef and reduce the broth.

Instant Pot Brisket Street Tacos – they are done when the meat shreds but don’t overcook and lose all the moisture in the meat!

The poblano and onion topping is a bit fussier and done oven/stove-top. First off, roast the poblanos under the broiler (a foil-lined sheet pan is best for this) turning as necessary until the poblanos are blistered and slightly charred in spots. They’re easier to roast if you line them up so they are touching and let them support each other.

Remove and let them steam (I just close the foil around them) until easy to handle, about 15 minutes, peel (don’t rinse; it’s ok for bits of charred skin to remain here and there) remove the stem and seeds and cut into strips.

Instant Pot Brisket Street Tacos – these have been griddled like a quesadilla and are INSANELY good.

How to Use, Besides in Street Tacos:

While two pounds might seem like a more than adequate amount of beef, once cooked and shredded (and snacked on, lol) you are going to want to make recipes like these street tacos that stretch that beef. If you’d like other options besides tacos or just have some leftover, consider the following:

How to Store Instant Pot Brisket:

Store the beef and poblano mixture for Instant Pot Brisket Street Tacos together or separately in an airtight container in the fridge for three to five days.

If you are not going to use all of the beef, freeze it for another time. It freezes beautifully and will keep several months in your fridge’s freezer and closer to a year in a deep freeze.

There is no doubt that brisket can be pretty pricey, depending on your location and the time of the year. Look for sale pricing in the late summer to early fall. Often brisket will be on sale in large pieces (the whole brisket). There are all kinds of videos on how to break down a brisket. I do prefer the fattier point rather than the flat for these tacos but either will work.

You may find chuck at a great sale and feel free to substitute. The chuck does have quite a bit more marbling than the brisket, so keep that in mind. I do think the brisket has a beefier flavor.

As far as the other ingredients, you’ll find peppers like poblanos at their best pricing in season, late summer to early fall, and they are often more available then. Canned or boxed beef broth or stock will almost always be on sale, along with other broths, before holidays. Stock up then.

Hi Guys! It’s a beautiful fall day right now where I am (and I hope the same for you) and perfect for these street tacos – although they’d be good anytime! I hope you’ll give them a try. You know the old commercial, I’d like to give the world a coke? That’s how I feel about these! I’d love everyone to taste them at least once! What can I say, I guess I’m a taco pusher, now, lol!!

For the Onions & Poblanos Topping and Serving:

Add oil to Instant Pot and set to Saute. While it heats, salt and pepper the brisket, then sear in the Instant Pot. Work in batches if necessary and transfer brisket chunks to a plate once each side is browned.

In the oil remaining, add the onion and saute, scraping the bottom of the Instant pot as needed. Once the onion has softened, add the broth, a little at first, deglazing the pot and the vinegar. Add the jalapeno, close the garlic packet up and place it on top.

Lock the lid in place, seal and set to High Pressure, 55 minutes. Do not use the keep warm function when finished; just turn off the pot and let the pressure naturally release (will take about 30 minutes.)

Strain the broth in the instant pot and add any of the solids to the beef. Shred the beef and toss, taste, and add more salt and/or pepper if desired.

Return the broth to the pot, turn the Instant Pot on to Saute and allow the liquid to reduce to about a cup. When finished, defeat the sauce if desired, taste and adjust flavors of the broth by adding more vinegar, salt or pepper as desired; set aside for serving.

For the Onion & Poblano Topping and Serving:

To roast & prepare the poblanos, simply place, touching each other, on a foil-lined baking sheet. Broil, turning as necessary until skin is blistered. Some charring is ok. Remove from oven, wrap in the foil they were roasted on, and leave for 10 to 15 minutes. Remove the skin, stems, and seeds and slice them in strips.

In the meantime saute the onions in two tablespoons oil over medium low heat, stirring as necessary until softened and slightly browned on the edges, about 10 to 12 minutes. If the skillet becomes dry or dark. add a little water.

When peppers are finished and cut into strips, and the onions are almost ready, add the poblanos. Taste and add salt and/or pepper before serving.

Assemble tacos by filling warmed tortillas (warm in a pan, on a burner or on the grill) with cheese, top with the brisket, then the poblano peppers and onions. Serve with the juice and a small salad from the remaining ingredients.

Optional step: Fill tacos and griddle over medium-high heat in a little oil until browned in spots and crisped, turning once.