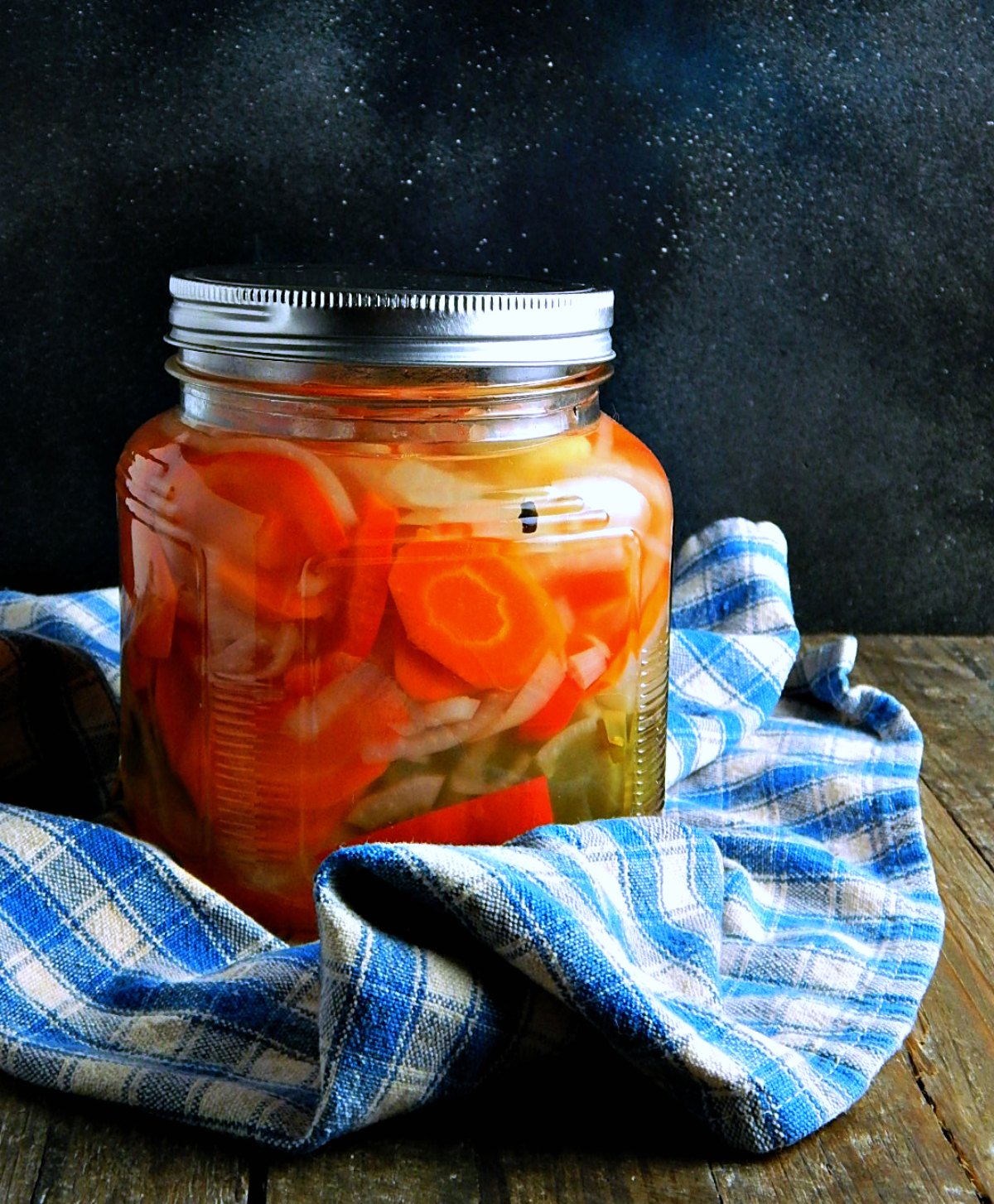 Have you had those marvelous pickled veggies in restaurants that are sometimes a garnish on Mexican or food from other Latin American countries? And of course, as I’m saying this, I’m assuming that you’re probably not in Latin America and don’t already make Escabeche, Mexican Pickled Vegetables! Although I do get visitors from all over the place and so far today, according to the WordPress wizards, I’ve had seven visitors from Mexico! Hola!

You’ll notice right away that I’m calling this recipe Escabeche – Mexican Pickled Vegetables even though they aren’t limited to Mexico. I just think that most people here in the US have experienced them in Mexican restaurants so that’s what they’ll look for. Honestly, when I was first served them at a restaurant, I didn’t know what they were called and only really knew Escabeche as a dish with fish! No worries – no pickled fish in this recipe!

These Escabeche – Mexican Pickled Vegetables are pretty outstanding. The brine is light and fresh, the pickled veggies are tender and crisp and there’s no doubt that they look gorgeous.

And there’s no doubt they’re kind of addicting! They’re just the thing to freshen up any rich, saucy and/or cheesy dish. I made some to serve with my Guatemalan Chicken in Coconut Milk, Pollo en Leche de Coco when I made it the other day.

Today I chose to pickle carrots, along with a little onion and garlic (that onion & garlic helps flavor the pickles) and then I tossed in a part of a bell pepper that was hanging out in the fridge – the bell pepper pretty much stole the show. You can add just about any vegetable you’d like. I often see mixes like this with cauliflower, too, but the sky’s the limit.

Making Escabeche – Mexican Pickled Vegetables is a simple and straightforward process and there are two ways to go about it. The first is to simply add the ingredients into a pot, starting with the sturdy vegetables and bring to a simmer, adding any of the more delicate veggies a few minutes later. What seems to be the more traditional method is to saute the vegetables with a little bit of oil and then brine them. Escabeche is often referred to as a salad and that method kind of brings that vibe home, doesn’t it? Vinegar, oil, vegetables. I chose the easier boil in one pot method.

This is the kind of recipe that can vary from place to place and family to family and is easily adapted as to the type of vegetables, the ratios of the brine and any flavorings you’d like to add. I saw one recipe with marjoram, a fave herb of mine, but also saw many with oregano or other herbs. I do like to add a touch of sugar to my Mexican Pickled Vegetables (maybe a more North of the border addition?) so feel free to tinker however you’d like to.

With the brines for recipes like this, there is a “rule of thumb” that the proportions should be half vinegar and half water. That makes the recipe very easy to scale up or down if you want more or less. It’s easy enough to guestimate how much brine you might need or you can be more exact. Add your vegetables to the final container you’ll store them in, then cover with water. Dump the water out into a measuring cup and divide that amount into two and you’ll have the exact measurement for both the vinegar and the water. Scale down the other ingredients to suit. This recipe has not been tested for canning.

One of the things I love about quick pickled vegetables is that they’re a great way to use up a bit of this or a little of that and pickling is a great way to extend the shelf life of odd bits and pieces you might have in your fridge. The bit of bell pepper I tossed in is a perfect example of this. Now that it’s pickled it will be good literally for weeks in the fridge.

Vinegar is an item I shop strategically for (I use quite a bit of it) and try to stock up on just prior to Easter when it is usually at a low. It might look a bit strange if you look in my laundry room after Easter and see multiple jugs but it’s normally at quite a big discount. The flavored or specialty vinegar is usually on sale at the same time, often unadvertised.

When shopping, the items that are not terribly expensive that add up over the course of a year that can make a dent in your budget; it just happens so slowly it’s not as noticeable as some of the bigger items we might buy. When a holiday rolls around (say Easter since I mentioned it and it’s coming up) we are very likely to shop around for a big ticket item, say a roast or a ham, etc., comparing prices to save a few dollars. But if you’re like me and use a jug of vinegar a month and can save a dollar or two just by  “when” it’s bought, factored out over a year, that’s a $12.00 to $24.00 savings.

In a non-reactive pan, add vinegar, water, sugar, and salt. Bring to a boil, stirring once or twice until sugar and salt are dissolved. Add carrots (or any crisp hard, vegetables), jalapenos, and onion and as soon as they reach a boil, turn down to a simmer and simmer for about 15 minutes until tender but still crisp.

Add in the bell pepper or any other softer vegetables after the carrots have been simmering for about 10 minutes.

In the meantime, place the garlic, peppercorns, and herb of choice in a very clean jar. When the vegetables have been cooked to the desired doneness, transfer to the jar and cover with the brine. If more brine is needed, add a little vinegar and water in equal amounts to the hot pan and heat to a boil. Add to the jar with the rest of the ingredients.

Allow to cool completely and store in the refrigerator. May be eaten after two to three hours but are at their best when allowed to pickle for at least a day.
Note: many vegetables pickle well in this brine. Simply cook the harder, crisper ones for the longer amount of time and the softer, more tender vegetables for the shorter amount.

I’ll be sharing Escabeche – Mexican Pickled Vegetables at Fiesta Friday #264 where I’m Co-hosting along with our hostess with the mostest, Angie. I’ll be visiting all the bloggers who have linked up and you might want to too! There’s bound to be many marvelous recipes and party ideas!