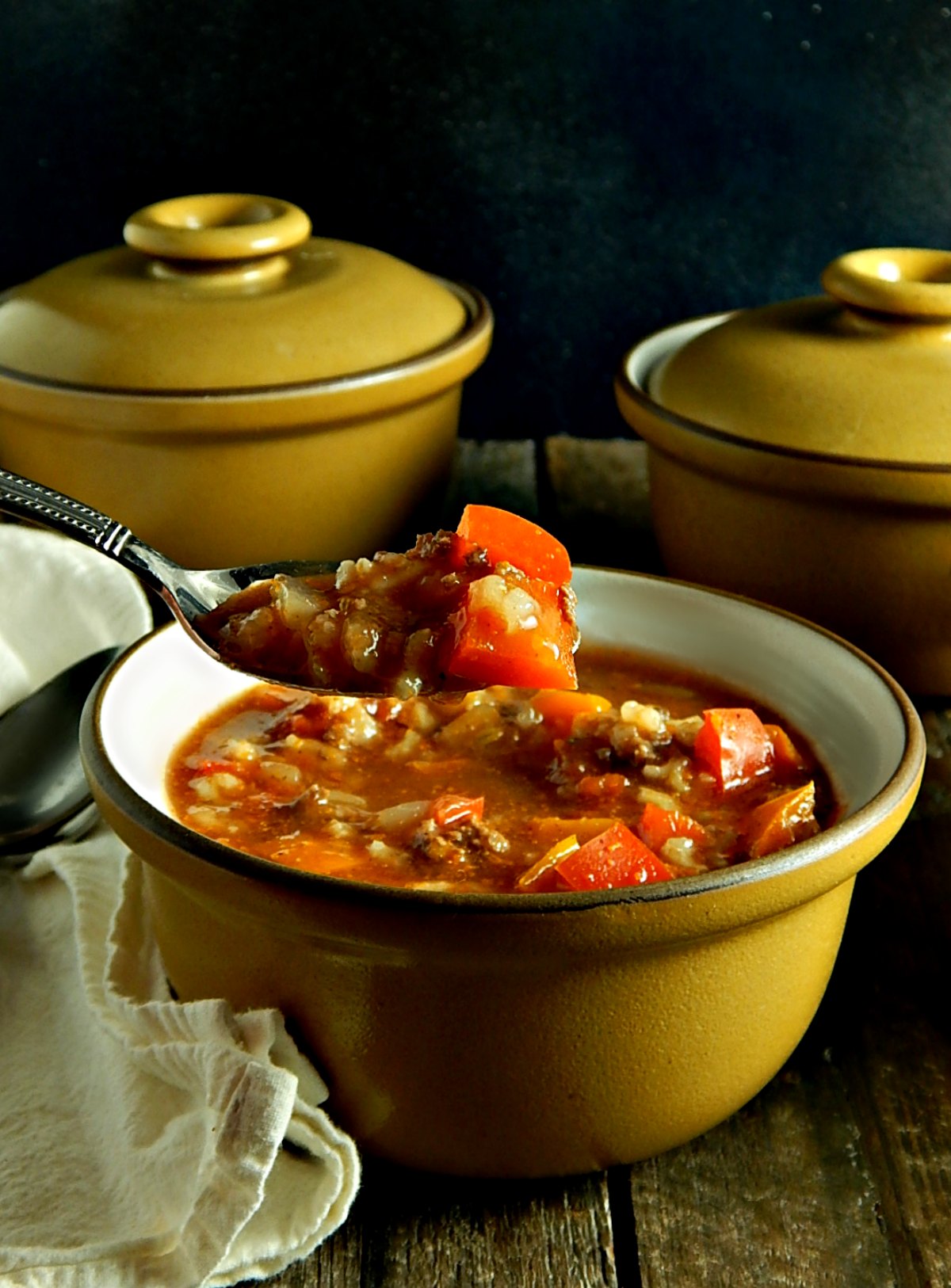 So I was trying to think of the last time I made Soup. It was so long, I had to look it up! I made a White Chicken Chili that can be made in the Slow Cooker, Instant Pot or on the Stove in January, and it’s pretty soup-like but the last bone fide soup I made was in December: My friend Tanya’s Instant Pot Mexican Chipotle Chicken Soup. So I’m due! You, my friends, are due! I’m getting out of my Mexican soup rut and shaking things up with this Stuffed Bell Pepper Soup Instant Pot/Stove Top.

This Stuffed Bell Pepper Soup Instant Pot/Stove Top is everything you love about Stuffed Bell Peppers but in a soup form. You might already have the ingredients on hand; if not, make run to the store between blizzards and tuck in for a weekend of shoveling, binge-watching (I’ve gotten stuck on Manifest – doncha love Prince Charming?) and this quick, easy and comforting soup!

As far as I’m concerned there’s nothing better than soup. A good, hearty one like this is always perfect for lunch and IMHO perfect for dinner, too. And maybe even breakfast, lol. You just add a few crackers or biscuits or a good hunk o’ bread and you are set. (Maybe you’d like to give my Crusty Bread a try – it’s a no-knead overnight bread, so it’s basically no effort. I taught my son, Kraig and his g/f Tweety that bread last weekend to go with an Enameled Cast Iron Dutch Oven I gave them. They happily threw off their low carb diet. Yep, now I’m a bread pusher!! Should I feel guilty?

But back to this soup. It’s a super simple just about dump in the pot soup. Yeah, you have to brown your ground beef  & onions, but then everything else gets dumped in: bell peppers, and rice just like your stuffed peppers. And then the canned tomatoes & tomato sauce forms the base of the soup. So I have some of my favorite spices in this soup, which leans towards the Italian side, but if you have a fave stuffed bell pepper recipe, you can use the same spices you use in those. That’s gonna make your soup have all the flavor of your familiar comfort food.

I gotta give a shout out to what’s become one of my “signature” spice mixes over the years, Michael Chiarello’s Fennel Spice Mix. It gives a kind of “just what’s in this?” flavor to my Stuffed Bell Pepper Soup Instant Pot or Not. I just love the stuff and I don’t even really care for fennel! Go figure! If you want to make it you can cut way back on the recipe or make a jar of it – I give you a few ways I use it on my post so you won’t be left high and dry wondering what to do with the rest of it. And if you don’t want to add that spice rub to your pot of soup, well, it’s your soup, now. 🙂

Normally when I make soups with rice, I like to cook the rice separately so the soup doesn’t get too starchy. Until recently, it never occurred to me that I could, before adding the rice to my soup, just rinse the rice like I do when I make rice. I think it worked pretty well and I won’t be cooking my rice by itself again when I make a rice-based soup.

The key to rinsing rice (and this is especially important when using the Instant Pot) is to really rinse the rice well. I explained in pretty good detail, as well as all the “whys” on my post on Perfect Instant Pot Rice, so take a peek if you want. Basically, the gist is to put your rice in a strainer, put the strainer in a bowl just a bit larger than the strainer and run water over the rice as you swish it around. When the bowl fills up, empty it and repeat until the water in the bowl is clear. That’s five more times (for a total of six times). It always seems to be just six times, no matter what rice I use. It takes a few minutes (and a little water) but it makes a huge difference in your final soup.

When you’re cooking the soup on the stovetop, keep the heat at a simmer after the rice goes in and don’t stir the heck out of it and the rice turns out better. In the Instant Pot,  I like to do a natural release for 10 minutes before letting the steam out just so the rice has a chance to “finish” gently in the pot. It will be fine if you do a quick release but the extra time lets that rice plump up.

Final hints: keep your bell peppers a little chunky so they won’t be too soft when the soup is finished. The recipe can be short cut by substituting a tablespoon of Italian Seasoning (check out my homemade blend) instead of the oregano, garlic powder, Michael Chiarello’s Spice Mix and the red pepper flakes. Add a bit of hot sauce before serving; not enough to make it “hot” just give it a touch of acid. If hot sauce isn’t your thing, try a bit of vinegar, maybe a red wine vinegar.

Stuffed Bell Pepper Soup Instant Pot/Stove Top is a pretty inexpensive soup to make if you shop well. If you buy your ground beef on sale in larger packs, divide it up and freeze it, you’ll save quite a bit of $. On sale, it’s often half as much as the standard grocery store price.

The peppers are always going to be a variable. The green peppers are usually a lot less than the colored bells, but ya gotta admit those red & yellow peppers look gorge in this soup! Watch for sales and since bell peppers keep so well, pick them up at a low and buy a few for the upcoming week, too. Generally, peppers are priced by the pepper rather than the pound so buy the biggest ones you can find.

I always stock up on stock (usually for the year) before or during the Thanksgiving, Christmas and New Year’s holidays; if you miss those sales, you’ll find great sales around Easter, too. Watch for canned tomato products on sale throughout the year, especially late summer/early fall when the warehouses are full and take advantage of those sales to stock up on it, too. Both Aldi and your Buyer’s club are great places to buy stock/broth, too, although thier prices aren’t usually as good as a grocery store sake price around a holiday.

Add in the oregano, garlic powder, salt, pepper, the spice mix, red pepper flakes, and brown sugar. Stir for a minute until fragrant. Immediately add the broth, scraping up the bottom of the pot well to remove any fond on the bottom. Sprinkle the diced peppers over the top, then add the rice in an even layer, the tomato with their juice, then the tomato sauce, trying not to disturb the layers. Do not stir.

Place the lid on the Instant Pot, seal, press cancel and set to High Pressure, 9 minutes. When time is up, if time allows, use a 10-minute natural release and then release any remaining pressure. A quick release may be done, but the rice fares better with a natural one. Stir, add a little hot sauce and serve.

Add ground beef and onions to a large pot or Dutch oven. Cook ground beef, breaking into 1/2 inch chunks until browned and no longer pink. Drain excess fat if desired.

Add in the oregano, garlic powder, salt, pepper, the spice mix, red pepper flakes, and brown sugar. Stir for a minute until fragrant. Immediately add the broth, scraping up the bottom of the pot well to remove any fond on the bottom. Sprinkle the diced peppers over the top, then add the rice the tomato with their juice and the tomato sauce. Stir.

Bring to a boil, then turn down to a simmer and cook, stirring very gently now and then if needed, until rice is tender, about 15 minutes longer. The soup benefits from about a 10-minute rest before serving. Stir, add a little hot sauce and serve.

I’ll be sharing Stuffed Bell Pepper Soup Instant Pot/Stove Top at Fiesta Friday #264 where I’m Co-hosting along with our hostess with the mostest, Angie. I’ll be visiting all the bloggers who have linked up and you might want to too! There’s bound to be many marvelous recipes and party ideas!