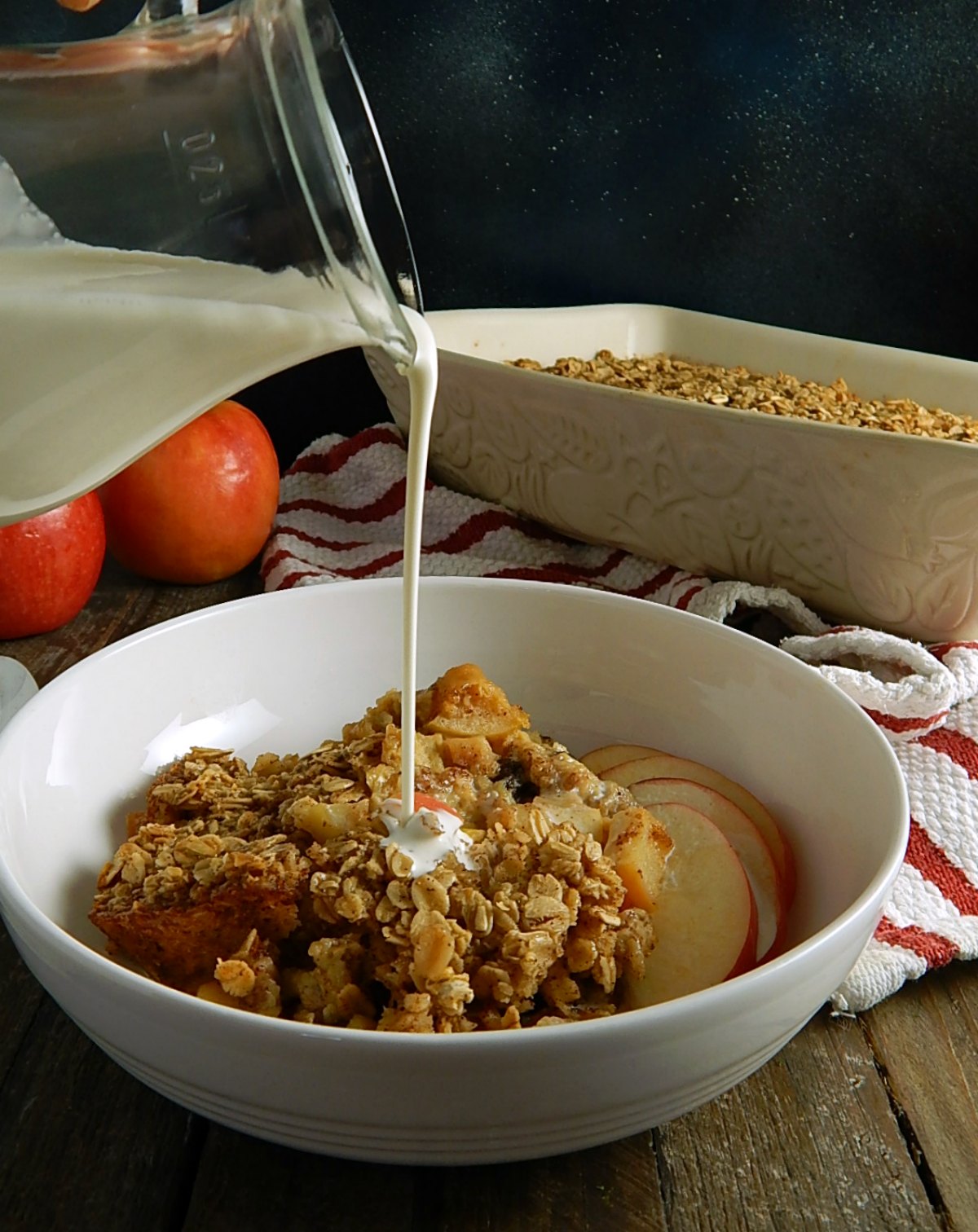 If you’re looking for an easy, no fuss way to get breakfast on the table, look no further than Make-Ahead Apple Baked Oatmeal. There is something to be said of springing (ok, stumbling, #not a morning person) into the kitchen on a cold, frosty winter morning, getting the oven going and baking a panful of warm, apple-y cinnamony make ahead deliciousness.

And then there is the distinct pleasure of crawling back into bed (just don’t fall asleep) until the aroma of baked apples and cinnamon wafts through the house, pulling out that steamy pan of deliciousness and calling, “breakfast!” And since you made so many brownie points by making breakfast, it’s only right that everyone else hustles with plates and juice (and clean-up) amirite? Well, one can hope.

I’ve made a few baked oatmeals over the years and all were pretty forgettable. They were all “too” something. Too dry, too cakey, too sweet, too crunchy. This Make-Ahead Apple Baked Oatmeal is just right! It’s the baked oatmeal even Goldilocks would love!

I just can’t get over that not only is this Make-Ahead Apple Baked Oatmeal super easy to put together but that it can all be, and really should be, made the night before. Then when you pull it out of the oven the top is crunchy, oaty deliciousness and the bottom is chock full apple bits, some a bit firmer others just soft and yielding. It’s almost custard-like, but that doesn’t stop me from putting it in a bowl (it doesn’t cut cleanly, like a cake, so be prepared) and drizzling cream or milk over the top.

I’ve only ever made this recipe with apples, but I know pears would be great, and it might be worthwhile to experiment with your fave fruit – it’s kind of like apple crisp. You could easily adapt the recipe to whatever you’d like.

I’ve only ever made Make-Ahead Apple Baked Oatmeal with apples, but I know pears would be great, and it might be worthwhile to experiment with your fave fruit – it’s kind of like apple crisp. You could easily adapt the recipe to whatever you’d like.

Some recipes I’ve tried for baked oatmeal have used two to three times the amount of sugar that is in this recipe, and I can get how that would make a fantastic caramelly, almost syrupy apple layer. I’m not too much of a sugary morning person so as I made the recipe, I cut back each time until I got it where I thought was just enough sugar to make the recipe work without being too sweet. You know your tastes. Add more sugar if you want. And more cinnamon, too, if you lean that way.

I’ve seen recipes for baked oatmeal that aren’t made ahead but I’m a bit suspicious that the oats might be pretty hard and crunchy with this particular recipe if it’s baked the same day it’s made. It’s my guess that maybe you’d want to use instant oats instead of rolled oats if you go that route. I haven’t personally made this the same day, just so you know.

Everyone knows the best time to buy apples is in the fall; that’s a no-brainer. But there is a second time to buy apples at a reasonable price and that’s when many apples come out of their “storage.” See, there are various ways to store apples, some more effective and pricier than others but a lot of apples are simply put in cold storage. That buys a few months time and you might benefit from that at the store during January and February. Anyway, watch for specials. And store your apples in a cool place and they’ll last a bit longer.

Stock up on oatmeal in the fall, buy it in bulk when it’s cheapest or look for sales with coupons at the grocery. You might find it on sale during holidays that are known for brunches: Mother’s Day & Easter. Aldi is a great place to pick up oatmeal if you have a store nearby and is indistinguishable from the name brand.

If I’m not shopping at Aldi for my basic baking goods, I do try to pay attention to sales, especially big holiday sales like Thanksgiving and Christmas in the fall/winter and Easter in the spring. Stock up on the basic ingredients. Flour, when brought into the home should be refrigerated for three days to avoid any “peskies.” Just FYI, I often sub in white sugar and a little molasses for brown sugar. See how in my Make Your Own Brown Sugar post.

Lightly spray a baking pan, preferably an 8 x 12″, although the recipe isn’t particular and almost any size will work from a 9 x 9″ up to a 9 x 13″; the difference will be in thickness and the thicker the baked oatmeal, the longer it will need to cook, so go up or down on timing as needed.

When ready to bake, preheat oven to 350 degrees F.

In a large bowl, whisk together the oats, baking powder, cinnamon, nutmeg, salt, and brown sugar. In a smaller bowl, mix the milk, eggs, and vanilla. Immediately whisk vigorously to combine so the butter doesn’t harden in the cold milk. Pour over the oatmeal mixture and stir together.

Distribute the diced apples (and raisins if using) evenly over the bottom of the baking dish; pour the oatmeal mixture over the top. Cover and refrigerate overnight.

When ready to bake, uncover and bake for 30 to 45 minutes until top is golden brown and apple pieces, when pierced with a fork are tender. The mixture should be set around the outside edges but will be a bit moister in the middle. When pressed it’s ok to be a bit soft but shouldn’t be “sloshy.” It will continue to firm a bit as it cools.

Serve warm or at room temperature, with powdered sugar, milk or cream as desired.