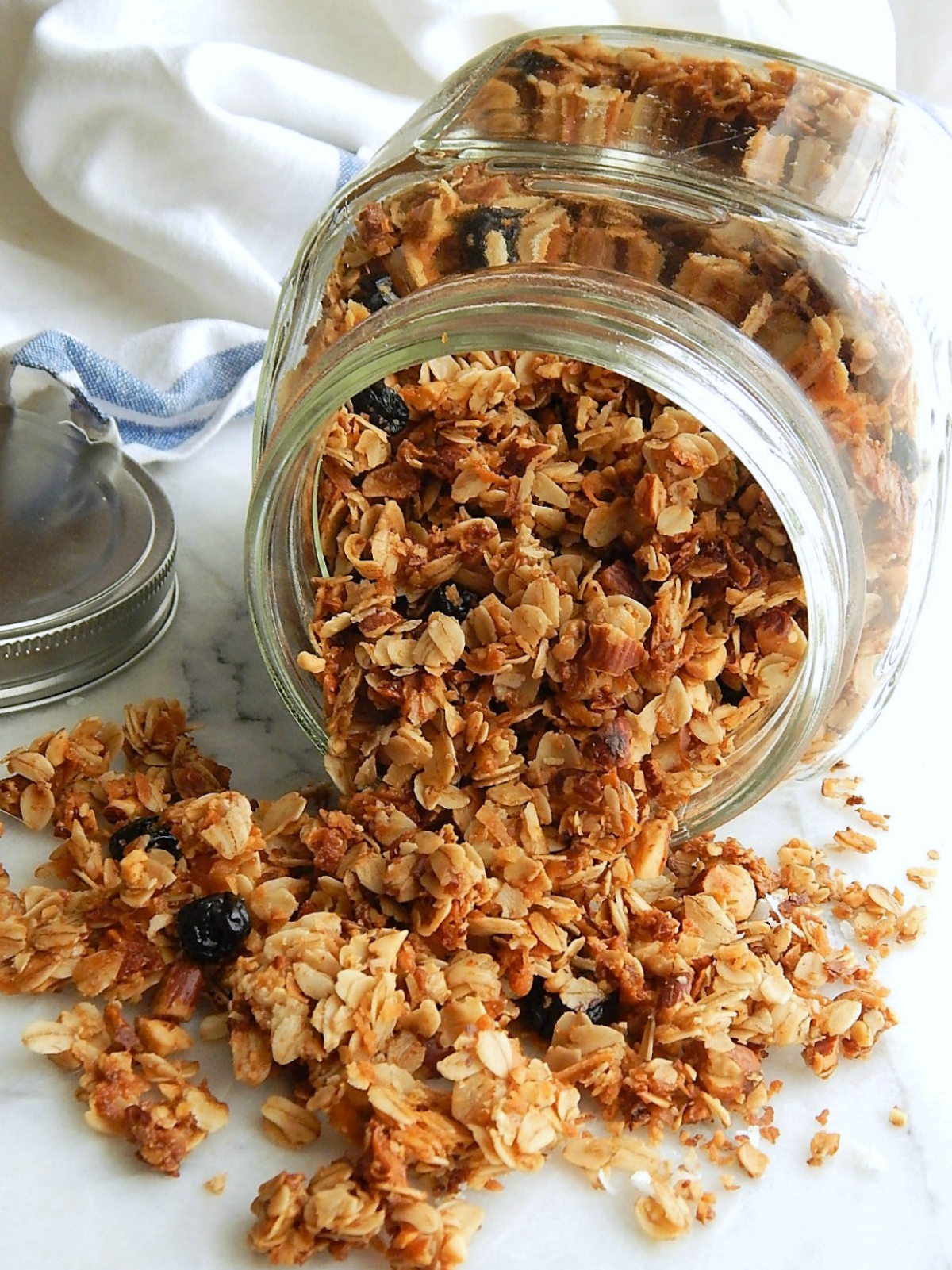 I’m always making granola of one type or another but never seem to actually post recipes. Maybe because in real life I’m more of a dumper than a measurer, at least when I make granola. This Healthy Almond Coconut Granola, though is just too good to be missed, so I measured! Feel free feel to tinker, though, to suit your tastes.

I do try to eat healthy a lot of the time hoping it balances out some of my desserts? Maybe not, but oatmeal is one of my go-to breakfasts and I’m always munching on the 10 almonds I’ve supposed to eat every day. But that gets old after a few years. Old, old, old. So I like to change things up with recipes like my home-made Swiss Bircher Muesli or as I call it, Fake Familia, and granolas like the Gingerbread Granola I posted earlier, and now this Healthy Almond Coconut Granola.

Healthy Almond Coconut Granola is so good, you won’t even *think* about it being healthy. It’s light, it’s crispy, it’s crunchy & chewy at the same time. You’ll just want to keep munching on it. But go easy and remember that anytime you’re using a dried fruit like coconut (and the few berries I like to add for color & that satisfying chewy factor) you’re eating concentrated flavor.

This recipe is heavy on the nuts, too, which aren’t low calorie even though they’re so good for you. I try to “formulate” my granolas so a serving gives me the 10 almonds I want to eat every day.

Cereals are also one of those items that, when you eat, you want to think about how the brain is signaling that you’re full. That is one thing about granola, it does take a bit of time to chew so your brain can catch up with your tummy. You almost hafta eat it slowly and chew thoroughly.

I like to use unsweetened coconut (but even though I actually like it best made with sweetened!) & like honey as a sweetener because honey helps the granola stick together. If you’re a maple fan, try maple syrup, but the more neutral honey flavor lets the other ingredients shine. A little almond extract brings home that almond flavor, and coconut extract or vanilla are both good., too.

I don’t use coconut oil for a lot of my cooking (3rd world countries & destruction & all) but I do like it in my granolas. It gets all melty and helps everything stick together because it is thicker again at room temperature. I keep it in the fridge for freshness. When I measure it, I take it out ahead so it’s soft or nuke the jar for about 25 to 30 seconds. Then I measure using the “displacement” method.

If you’re not familiar with displacement measuring, for this recipe, add 2/3rds cup of cold water to a 1 cup glass measuring cup. Add spoonfuls of the coconut oil to the water until the water level comes up to one cup. When you drain it, the water just sloughs off and you’re left with 1/3 cup of coconut oil.

When I make granolas, I go easy on the oils and sugar. That means it’s not as sticky as some granolas, so I’ve found a method that gives me some clusters. (I LIVE for those clusters, don’t you?) I spread the granola out on two sheet pans, then press it down. Halfway through, I rotate the pans from bottom to top and turn them front to back so the granola cooks evenly. They’ll be some areas that are browner and others lighter, but that just adds interest. Then before I touch it, I let it cool on the sheet pan, then carefully scrape it off the sheet pan with a thin, metal spatula, breaking up the granola as needed.

Ok, I confess: usually I just eat any pieces that need to be broken up. Problem solved, lol!

As far as cost, oats are really dirt cheap (and healthy, too!) and I used the Quaker Old-Fashioned. They’re generally on sale in the early fall and that’s when you’ll find coupons. Supply & demand, right? The harvest’s over and the warehouses full. Stock up, because the new harvest won’t start coming in until the following May.

As far as almonds go, any nut is going to be at the lowest price of the year late fall and around the Christmas sales, and almonds stay fresh, tightly wrapped, in the freezer for months. If you don’t buy then, check Aldi and Costco. The prices at both places are close.

Coconut is another holiday sale item, usually cheapest around Christmas and New Years. Use your coupons. Keep it tightly sealed in the freezer inside a second bag like another Ziploc; it doesn’t freeze solidly, so you can usually measure with no problem. It not, leave it on the counter for a few minutes. As for the coconut oil? I don’t buy it often enough to recommend a strategy, nor have I ever seen it on sale at the store. Maybe you have a strategy for a cost-effective way to pick up coconut oil?

A very lightly sweetened and healthy Autumn Almond Pear Granola for breakfast, snacks or yogurt. This is not your Mamma’s granola; it’s delicate and toasty in flavor.

In a small bowl add coconut oil and honey. Heat in the microwave in 30-second increments, stirring after each until melted. Add salt & extract of choice and whisk until well combined.

To a large bowl, add oats, coconut, almonds, and berries. Mix, then drizzle with the honey mixture and mix again until all is coated. Turn out onto two sheet pans.

Gently press with a flat-bottomed cup (spray the bottom with cooking spray if desired) until mixture is evenly flattened and compressed. Bake 18 to 20 minutes until granola is golden brown, rotating the cooking sheet(s) halfway through. When cool, use a spatula to loosen the granola from the sheet pans, breaking into chunks. Stores well for two to three weeks in an airtight container; for longer storage, freeze.