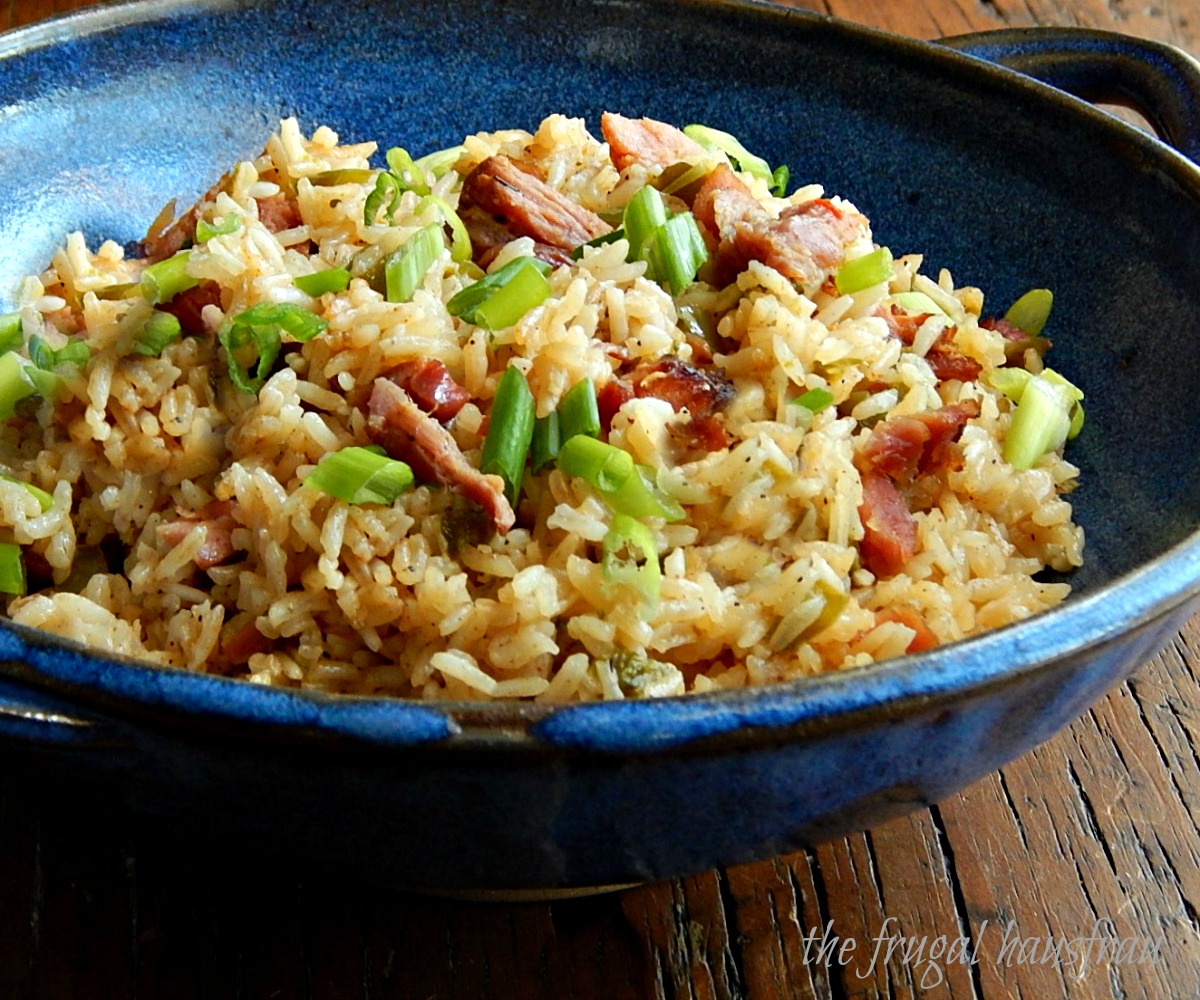 So you all know (if you follow me – and if you don’t, I’d love it if you would, here with email (on the right) or on facebook or twitter I cooked up a ham for Thanksgiving. And what a ham it was! The stunning and absolutely delish Biltmore House’s Tawny Baked Ham. It was just a half ham, but of course, there were leftovers! And this year, part of those leftovers went to make Instant Pot Opelousas.

Notice I said Leftovers with an exclamation point! I love love love me some leftovers, and you should, too. I remember, though, a time I wasn’t so sure what to do with a bunch of leftover ham. There are all the “usual suspects” like Bean Soup (this is a really good one) & Scalloped Potatoes & Ham, but what then? If that’s you, you really need to check out my “12 Days of Ham” where I show you about 30 ways to refashion that bounty into fabulousness. But this year, I wanted something different. Something fresh. Something with a bit of spice. And so my mind went south.

Oh, not south that way, but south to Louisiana. To a dish I’ve only heard of. Opelousas. Yeah – I mean I had to make it just because of the name, didn’t I? To a Northerner like myself, Opelousas is kind of like Jambalaya (here is my fave Jambalaya recipe, and it’s pictured, below) but different. It’s an easy one-pot rice dish with bell peppers and meat in it, anyway. But it’s, to me anyway, a little bit lighter and it’s really fabulous.

Opelousas is usually made in a rice cooker and can be made with all kinds of things. I found a recipe for a Shrimp Opelousas on All Recipes. Then I found a very intriguing Smoked Sausage and Steak Opelousas from Jaxx the Bearded Hiker. Check him out – he’s fun & boy can he cook! But I thought, why not make this with Ham? And then I thought, why not in the Instant Pot as Jaxx suggested?

It turns out that Instant Pot Opelousas is good, crazy good. I made it, then turned around and made it again, good. And then I made it again! And now I’m wondering how long I have to wait to make it again so that people won’t think I’m nuts. Although maybe that’s not even a deciding factor in the nuts category; I may have a few other strikes against me, including being a food-obsessed food blogger!

The key to this dish (and many rice dishes) in the Instant Pot is to rinse that rice. Rinse and rinse. Put the rice in a strainer, put the strainer in a medium to a large-sized mixing bowl (just a little larger than the strainer) and as you run tepid water (neither hot nor cold) over the rice, swish it and rub the grains between your fingers while the bowl fills up. When the bowl is full, empty & repeat for a total of six times or until the water in the bowl is clear.

You will not believe the difference that few minutes spent makes in the texture of any rice done up in the Instant Pot. Each grain is beautifully cooked, fluffy and separate and there isn’t any dull sogginess to the rice at all. That being said, some people do like their rice just a bit on the wetter side. I’ve got you covered in the recipe, below. Just add the barest touch of more liquid.

This Instant Pot Opelousas isn’t “hot” per se, just a bare touch of heat with 2 teaspoons of my Homemade Cajun Seasoning. Add a little more for a touch more heat, and if you’re a lover of heat, toss in a bit of Cayenne. Or hot sauce, or whatever floats your boat. Or just do what most Southerners I know do: Make your Instant Pot Opelousas on the mild side and put out about 3 or 4 hot sauces on the table.

Instant Pot Opelousas is an extremely frugal meal, just as it is, especially using leftover ham. The traditional bell pepper used in most Louisiana dishes that I know about it the green bell, which is always more inexpensive than the other colored bells, so that’s a plus. If you want to go with the full-on New Orleans “Trinity” the mix of Bell Pepper, Onion and Celery, go ahead and add about a half cup of celery into the mix. I didn’t use mushrooms in my Instant Pot Opelousas but left them in the text of the recipe because I know they’d be great in the dish, but leaving them out did shave a bit of cost on the recipe.

I’ve written a lot about saving money on rice, especially on my post on Perfect Instant Pot Rice so I won’t repeat myself, here. If you’re having difficulties with your Instant Pot Rice or Rice dishes, be sure to read that post. I gotta tell you, when my pup, Chance was ill and had to eat a diet of rice and ground beef or chicken, I learned a lot about cooking IP rice and went from rice only a dog would eat to absolute fail-proof rice.

Turn Instant Pot on to Saute, high heat. Add butter, onion, bell pepper and mushrooms if using. When softened, toss in the garlic, Cajun seasoning, rice, and broth. (The rice should be well rinsed and only drained for a minute or two until water stops running out the bottom. A few drips are fine.) Stir gently around the pot once and once only just to distribute the rice. Top with ham and green onions.

Place lid on Instant Pot. Hit the Cancel button and use the Rice option, making sure “Keep Warm” function is off. The Instant Pot will seal almost immediately because the pan is hot. When finished, around 10 minutes, allow to rest 10 minutes, off, undisturbed, then release any remaining pressure. Fluff with a fork, garnish with green onion and serve.

I’ll be linking Instant Pot Opelousas up to Fiesta Friday this week, and I’m one of the co-hosts, along with Judi @ cookingwithauntjuju.com. Take a minute to click over and check out all the posts!

If you came to this recipe looking for a way to use leftover ham, be sure to check out the link below for 12 Days of Ham. You might want to see the sister post for 12 Days of Turkey, too.