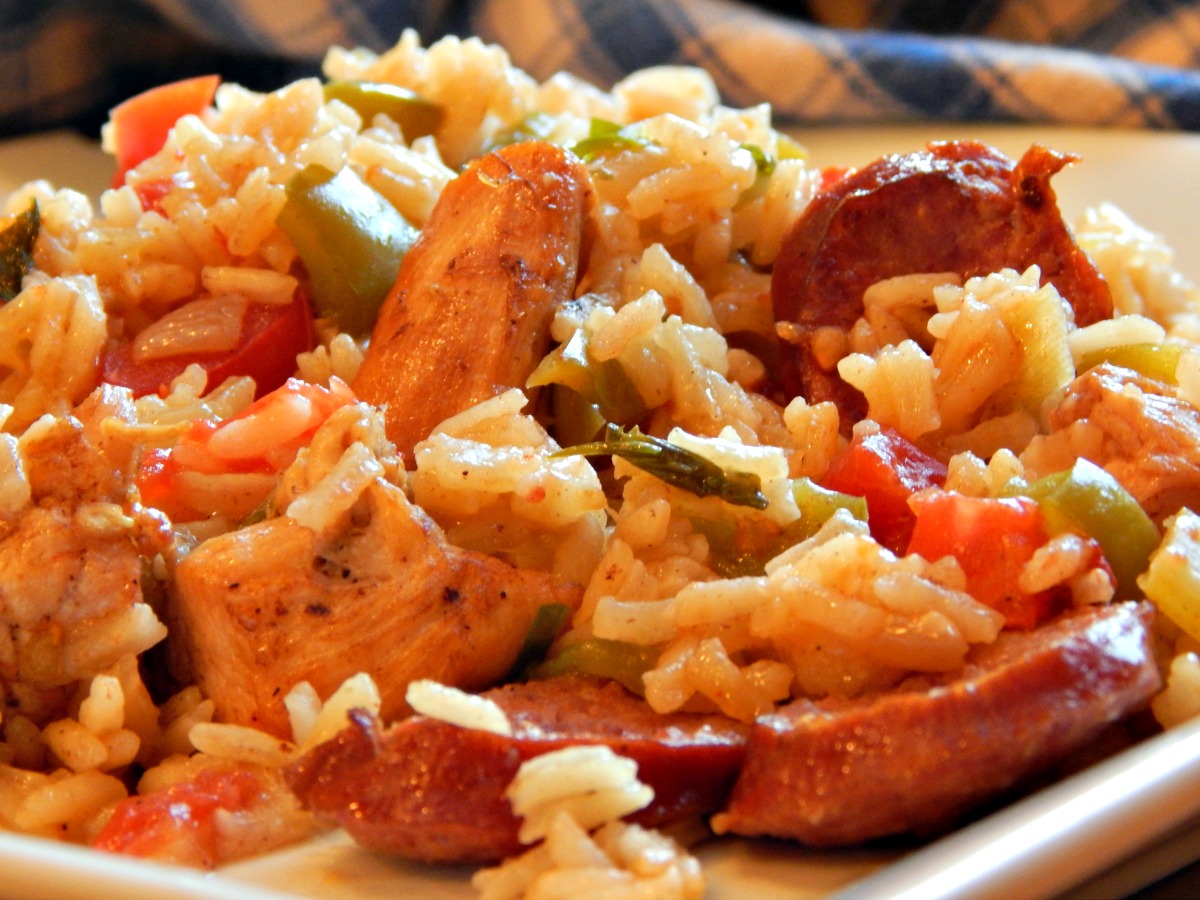 Jambalaya truly reflects a cultural heritage carried into the New World, nurtured and melded into its own special blend – hundreds of years ago, displaced French Canadians settled into the Louisiana area and adapted this dish to their new surroundings. A lovely melange of vegetables, earthy sausage and chicken are in this Cajun Jambalaya Recipe and it has just the right amount of spice to be interesting. Then Y’all can pass the hot sauce at the table! Happy dance!

I’m a Northerner by birth (Southerner by heart) and when I make this Cajun Jambalaya Recipe, I do just as the Cajuns did (and do) – I make it with the best, most available and cost-effective ingredients I can find where I live. So for me, that’s not alligator or oysters or shrimp or any items that used to be a necessity but are now specialty ingredients. It’s beautifully browned and tender chunks of chicken and rounds of smoked sausage – and I can attest that is perfectly legitimate and perfectly delicious in a Jambalaya. Add shrimp, though, if you’re feeling flush and seafood is plentiful in your area.

About the Cajun Jambalaya Recipe:

There are several types of Jambalaya and all are distinct dishes. There’s the New Orleans Creole Style Jambalaya, pictured below, recently added to my site. It’s tomato based and probably based off a Spanish Paella. It’s to die for, but my favorite Jambalaya is this Cajun Jambalaya Recipe. Even though they share the same name, it is decidedly more French than Spanish. There’s also a “Red” Jambalaya, made with lots of paprika, that is hardly ever mentioned in articles about Jambalaya and is sometimes confused with the redder colored Creole Style. And there are probably as many variations of all of them as there are cooks and pots in Louisiana!

Cajun Jambalaya starts out with a “roux” which is a mixture of flour and fat or oil, slowly cooked until it’s browned and that gives the Jambalaya a deep, earthy, rich and almost smoky back note of flavor. And that richness and smokiness are accented by the smoked sausage in the Jambalaya, slowly rendered so the flavor mingles throughout. Then the tender chunks of chicken fill the dish out and the veggies, the “trinity” of Louisiana cooking, onion, celery and bell pepper flavor the beautifully cooked rice. It’s enough to make me weak in the knees just thinking about it right now! FYI: This Cajun Style Jambalaya isn’t “hot” and a lot of Cajun recipes aren’t. It has just enough spice to be interesting (and that depends a bit on how spicy your sausage is) and then the hot sauce is passed at the table.

Even though it’s a bit more time and work to make a Cajun Jambalaya as opposed to the New Orlean’s Creole Style, I think this Cajun Jambalaya Recipe is really is a world-class dish and should rank right up there with the many other great rice dishes of the world – and now apparently does according to FoodBeast. And while I nearly always make this Jambalaya Recipe indoors these days, try it outside, maybe while you’re camping, in a Dutch oven over a campfire and you’ll be blown away.

For a long time, the Creole Style Jambalaya was in this recipe, just as a variation. Now it has it’s very own post, and we can concentrate on this Cajan Jambalaya Recipe, here.

This recipe starts out with a “Roux”, a mixture of fat and flour carefully cooked to the color of a copper penny. I make my roux on its own and add it to my Jambalaya because it’s easier for me to make sure it’s perfect and helps me avoid overcooking or burning it. Some people just cook right in the roux. I don’t risk it because a good roux is easy but does take time and attention and if it’s not right, it’s a start over kind of thing.

I have a post just on making the Dark or Red Roux, and it takes you through the stages of cooking if you’d like to take a look. I make a larger batch and refrigerate or freeze what I don’t use in this recipe. If you like Cajun or Creole food, it’s nice to have it on hand, or you can just make enough for this recipe if you want.

The rest of the recipe, after the roux is done is easy and straightforward. Just make sure to get a good brown on the sausage, cut the chicken into the right sized chunks and don’t overcook it in the initial browning. That will keep it from being too dry in the final dish. And when you turn the Cajun Jambalaya halfway through, do it quickly, gently and minimally and your rice will be gorgeous! You’ll add the chicken into the pot when the Cajun Jambalaya is turned, and if you’re adding shrimp, add it at the same time.

Saving Money on the Jambalaya Recipe:

If you use a locally available sausage, and especially if you skip the shrimp, this is a budget meal; everything else is pretty much common grocery store ingredients. Even if you use shrimp, and you buy it at the right time (right now, as the sales for Lent are starting is the right time, although good prices can be found during other holiday sales) and you use a reasonable amount, this can still be budget friendly.

As far as the sausages go, even Andouille is becoming available almost everywhere since some of the bigger pork and sausage producers have begun making it, and it’s often included in their sales. Smoked sausage of any kind keeps just about forever in the fridge and freezes well, so look for it and stock up on it while it’s on sale. And of course, if budget is no concern, go for the best artisanal sausage you can find!

This whole pot of New Orleans Creole Jambalaya, using pretty much all sales priced ingredients and no shrimp ran about seven bucks! The Jambalaya recipe originally was made April 2012 for $6.86, remade March 2014 for $5.60. Let the good times roll!

If this is your first time making a dark roux, you may want to make it ahead and concentrate on it, rather than multitasking. Roux takes 30 to 35 minutes and can be made in larger quantities and the extra and stored in the fridge or freezer where it will keep indefinitely. If you wish to make Roux just for this recipe, use 1/4 cup oil and 1/4 cup flour; it will measure slightly more than 1/4 cup when it’s done, but it’s fine. See link under ingredients for instructions.

Heat oil in pan over medium to medium-high heat and cook sausage until fat is mostly rendered and the sausage is lightly browned. Remove and place on a plate. Season chicken with salt and pepper and brown (but do not cook through) in the same pan. Remove and add to the same plate as sausage, but keep separate. You’ll add it back in when you turn the rice (which is when it will cook through) but the sausage goes in earlier, so don’t mix it together.

Add onions and celery to the pan and saute until nearly tender, add green pepper and garlic, and cook for a minute or two longer until the garlic is fragrant and the green pepper starting to soften.

Prepare green onion and tomatoes, add to the plate with the chicken (put them on the same plate so they can be added in one fell swoop at the appropriate time.)

Return sausage to the pot, add Cajun seasoning, salt, and pepper to taste (about a teaspoon of salt and 1/4 teaspoon of pepper) roux and broth, bring to a boil. Add rice and return to a boil. Cover with lid and turn down to a bare simmer; don’t lift the lid until you are ready to add the chicken. After 10 minutes, working very quickly, remove the lid and add in the chicken, green onion and tomatoes, along with any accumulated juices.

Quickly turn the rice once from top to bottom, If it is a large pan, this may take two or three “scoops.” This is easiest done with a spatula. Do not worry about “mixing” in all the chicken, tomatoes and onions and getting them evenly incorporated. The longer the lid is off, the more heat is lost and the more you mess with the rice, the more chance there is that it will become gummy and/or starchy. The point, here, is to get the rice from the bottom of the pan to the upper portions.

Return the lid, again, as quickly as possible, and slowly simmer an additional 15 minutes until rice is done.

Remove from heat and let sit for about two to three minutes with the lid on, then remove lid and fluff with a fork. Do not let it sit longer as it will steam and/or the freshly added vegetables and some of the meats/seafood will overcook.

Note: Shrimp/seafood should be added as the rice is turned, if using. 15 minutes is sufficient time to cook through.

adapted from our Scout troop