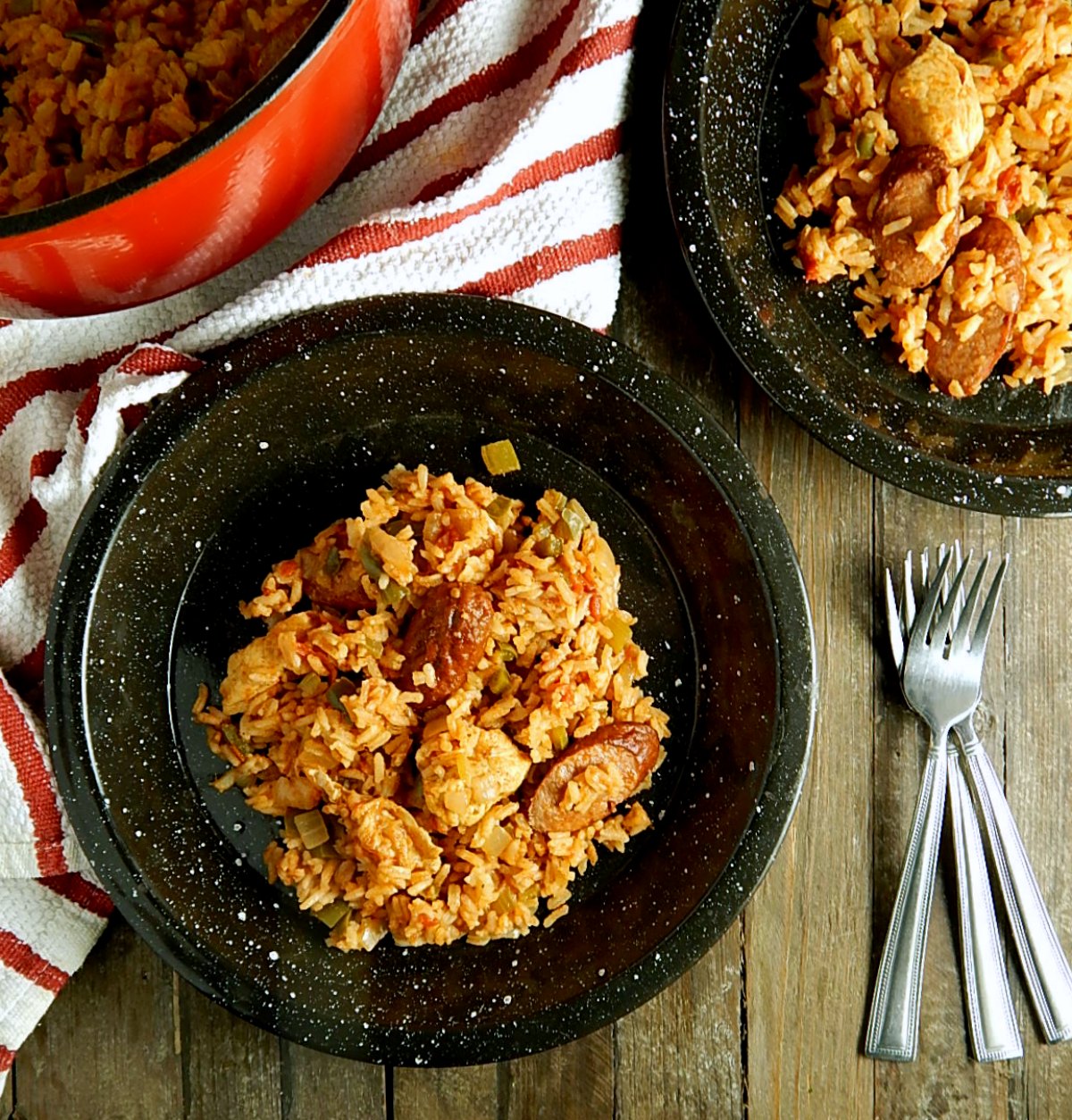 Mardi Gras is almost upon up, and Mardi Gras always makes me think of New Orleans and New Orleans always makes me think of Jambalaya. See how my mind works? It’s all about the food, lol! And while my fave Jambalaya Recipe is already on my site, one made with a roux (that’s said to be the Cajun-style) I really wanted to up my game this year and perfect a Creole-style Jambalaya, the tomato-y kind. Yeah, I’ had to get out of my (very delish) Cajun rut and make this New Orleans Creole Jambalaya for Mardi Gras this year.

Actually, I’ve been fooling around with different methods (including an Instant Pot one, but it’s not quite there yet) for New Orleans Creole Jambalaya when I chanced across a very different method on Serious Eats. Daniel Girtzer actually bakes his Jambalaya, and his article on the Secret of Perfectly Cooked Jambalaya is a fun read if you’re a food geek, too.

I just love Serious Eats, so I tried his baked method and adapted it to my style (ummm – that’s cheap, lol, but you can add shrimp if you want) and of course, used my fave recipe for Cajun seasoning. There’s not much diff between Cajun and Creole seasoning, especially since almost any cook worth his/her salt from the Big Easy has their own blends and there’s a lot of overlap in ingredients. I bake my brown rice sometimes, like for this Vibrant Vegetarian Casserole, so baking Jambalaya didn’t seem like too much of a stretch.

What came out of the oven was a beautiful thing; the big advantage is that once the Jambalaya goes in the oven, there’s no turning of the rice, constant watching and of course no scorching. I could have removed it from the oven a smidge earlier, which is a good lesson to remember- all ovens differ in how they cook and different pan sizes can make the timing variable so check it early. Even so, by baking the Jambalaya, it wasn’t mushy or liquidy or too gummy thick saucy – all of which can be the downfall of a typical Creole-type Jambalaya.

The flavor? Outstanding! Except we did add a tablespoon of hot sauce recommended by Serious Eats, even though it sounded like a lot. And it was. I cut that down to a teaspoon in the recipe, below. And I like heat. But better to have a New Orleans Creole Jambalaya that everyone enjoys and then add a little hot sauce at the table, IMHO. The amount of spice is already about twice as much as my regular Jambalaya Recipe even w/o the hot sauce, so this is no wimpy recipe.

Daniel Girtzer does the same thing I do when using tomatoes and liquid with rice, at least in any recipes where the texture is particular. You’ll dump your whole, canned tomatoes into a strainer over a bowl, crush them, then add the liquid to a measuring cup. You’ll want to measure so you know how much other liquid, in this case, broth to add to make the four cups needed for the right ratio of liquid to rice. I’ve done this enough to now that different brands of whole tomatoes vary a lot, and enough to know if you don’t get the ratio right, you’re not going to have a stellar recipe whether it’s Jambalaya or Restaurant Style Mexican Rice or any other dish.

The cooking part of this recipe starts out just like most recipes for Jambalaya. Saute the sausage and remove, saute the chicken and remove, add in the veggies – and then it changes up. You’ll add in a little tomato paste, then the spices to heat through and wake up, then the liquid. Bring it to a simmer and then add in the rice, the tomatoes, the sausage, and the chicken. Lid it and toss it in the oven and go about your business.

I’d say check on that rice (quickly) about five minutes before you expect it to be done and keep in mind it could take a bit longer…but if for any reason you check and think it needs to go longer and there’s no liquid left, you might want to add just a smidge more stock. When you pull out that hot, steamy dish from the oven, be prepared to be amazed! It’s a little like giving birth – all the pain that went before (with that massive amount of chopping half your veggie drawer – a quick shout out to my son, Kraig! Thank you!) will just evaporate once your baby comes out of that oven. Pass the hot sauce and prepare for the compliments! “Oh, it was nothing, really!”

The thing about making New Orleans Creole Jambalaya is that if you use a locally available sausage, and especially if you skip the shrimp, this is a budget meal; everything else is pretty much common grocery store ingredients. Even if you use shrimp, and you buy it at the right time (right now, as the sales for Lent are starting, is the right time, although good prices can be found during other holiday sales) and you use a reasonable amount, this can still be budget friendly.

As far as the sausages go, even Andouille is becoming available almost everywhere since some of the bigger pork and sausage producers have begun making it, and it’s often included in their sales. Smoked sausage of any kind keeps just about forever in the fridge and freezes well, so look for it and stock up on it while it’s on sale. And of course, if budget is no concern, go for the best artisanal sausage you can find!

This whole pot of New Orleans Creole Jambalaya, using pretty much all sales priced ingredients, no shrimp and the lesser amount of chicken ran about seven bucks! Let the good times roll! 🙂

Place strainer over a bowl and empty can of tomatoes into the strainer. Crush (carefully) and reserve tomatoes (set over a dish to contain any drips.) Add the juices in the bowl to a measuring cup (a 4 cup one if you have one) and add enough stock so the total liquid comes up to four cups. Set aside.

Preheat oven to 325°F (160°C). In a Dutch oven, heat oil over medium-high heat until shimmering. Add sausage to Dutch oven and cook, stirring often, until just starting to darken, about 3 minutes. Remove and set aside. Season chicken all over with salt and pepper. Add chicken and cook, turning, until browned on both sides (should be just browned, not cooked through) and remove to the same plate as the sausage.

Lower heat and/or add oil at any point to prevent burning. Add onion, bell pepper, celery, and garlic and cook, stirring and scraping bottom of Dutch oven, until browned bits have come loose and vegetables turn translucent about 10 minutes.

Make a well in the center of the vegetables, add tomato paste and cook, stirring, until lightly browned, about 1 minute. Add hot sauce and Cajun seasoning and allow to heat for seconds, or until just fragrant. Add the reserved crushed tomatoes and tomato/stock mixture and bring to a simmer. Season with salt, tasting liquid to ensure it is well seasoned.

Stir in reserved chicken and sausage, sprinkle rice over top and gently push the rice into the liquid so it is submerged. Return to a simmer, cover with lid and transfer to oven. Bake until liquid is fully absorbed and rice is tender, about 35 to 45 minutes. Remove from oven, covered and let rest 15 minutes. Serve, passing hot sauce at the table for diners to add to taste.